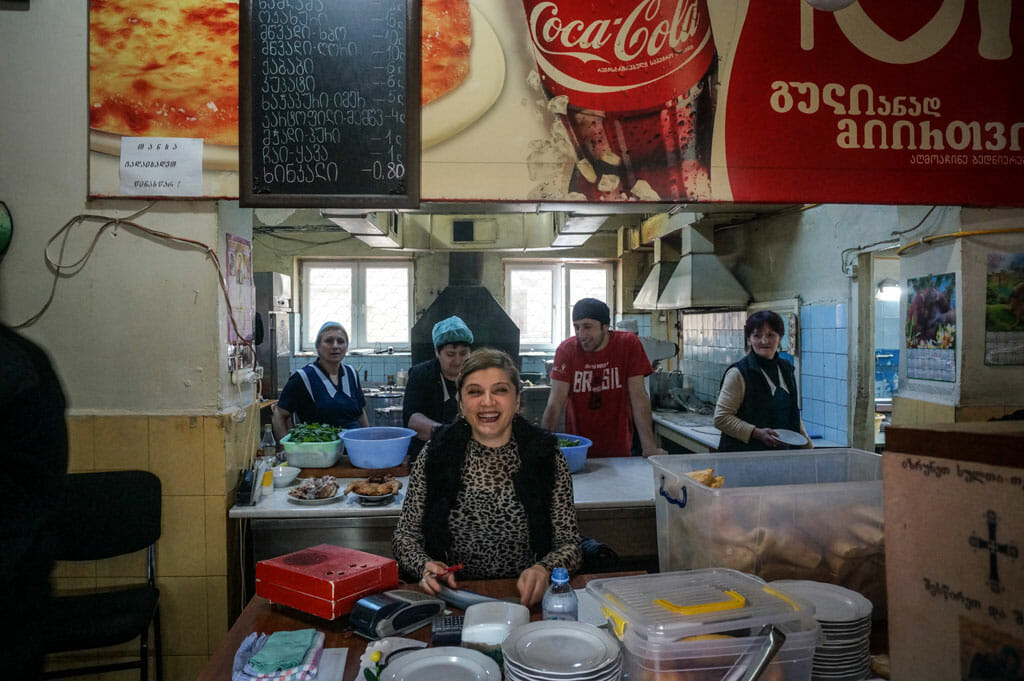 Few things in life are more rewarding than eating in Georgia. However, a single night at a Georgian restaurant can also be a terribly mortifying experience. Georgians like to order big but the palate can only take so much. All the worse for guests, as they are routinely tortured into learning just how magnificent Georgian cuisine is in one sitting. This is the kind of gluttony meant to send you to hell, and it totally short-circuits your senses.

You cannot contemplate the simple flavors in a piece of tender veal stewed in a tomato and pepper sauce when the table is covered with plates upon plates of pkhali, khachapuri, mtsvadi and so on while being obliged to raise one more glass of wine to wash down yet another toast. You unbuckle your belt three notches and take a deep breath with your head spinning. The man next to you nudges your shoulder with a lippy grin gleaming with the fat of a roasted suckling pig. “You like Georgian food?” he asks, although it isn’t a question.

The best way to appreciate the richness, boldness and, yes, even subtleties of Georgian cuisine is to take it one step at a time, starting with khachapuri. This west Georgian dish is a staple on every dinner table (except in Kakheti, where it is not traditionally served with meat dishes). But the doughy, cheesy and butter heavy khachapuri is a meal in itself and a good way to start the day, particularly if you have calories to burn later. One place we recommend is Retro, which specializes in Ajarian khachapuri, boat-shaped dough filled with cheese and finished off with a lightly baked egg, sunny-side up, and a glorious wad of butter slowly melting away on top. There is nothing understated in the “Adjaruli.” It is pure cardiac arrest but well worth the risk of hospitalization. 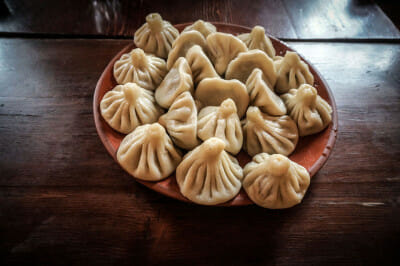 A couple of weeks ago a group of us went to a corporate-owned restaurant chain for khinkali, Georgia’s iconic dumplings. Oh, they were big, but bland, even after dusting a thick coat of black pepper on them. They don’t hold a candle to the exquisite fig-sized dumplings at Zakhar Zakharich. You will have to wait a bit longer, but that’s because the khinkali are made to order, the dough mixed entirely by hand – just one reason why these are the best in town. The other is the wide selection of delicious stuffings they use.

Zakharich is one of the few places you can find lamb khinkali, but we also like the hand-chopped beef and the kalakuri, ground pork and beef charged up with fresh coriander, garlic and red pepper. If you’re not a fan of salt, you’ll want to pass on the sulguni khinkali, but the cottage cheese version is refreshing, while the potato is more sapid than you’d expect and the mushroom simply killer. The minimum order is four, so don’t hesitate to sample up. The only problem with Zakhar’s is that you will be tempted to order other things from the menu. Do not do this. Khinkali eating is a ritual that you do not want to profane with other food. Some people will add kebab and mtsvadi to the table, but try to stay focused. The only thing you need to order with khinkali is beer and/or chacha. 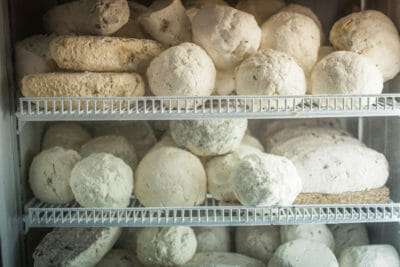 Across the street from Zakhar Zakharich’s is one of our funnest discoveries of the year, Shop Bagrati, a little wine and souvenir gift shop that also happens to be an outlet of craft cheese. The owner, Bagrati Mezurnishvili, and his wife, Lali, make cheese using an old family recipe, which he has taken some liberties with. The hard snowball-shaped cheese is a welcome alternative to the standard, albeit delicious three varieties found in Tbilisi and is flavored with an assortment of herbs, spices and even Saperavi wine. Bagrati also bottles a mysterious whiskey-like moonshine called “Iki” that is surprisingly smooth.

On wintery days, few things warm your marrow more than a savory bowl of kharcho soup, an intrepid mix of beef, tomato, rice, garlic, onion, fresh coriander and hot peppers. Frankly, you can find good kharcho all over the city, but great kharcho has to go all the way. Beef in Georgia is not traditionally aged. In fact, it was probably mooing a day or two before it ended up on your plate. Smart cooks understand that they must thoroughly stew the beef until it is soft enough to cut with a spoon. This is why we love Sasadilo Coca-Cola, the worker’s canteen in Didube. This no-frills proletariat cafeteria is as authentic as they come and one of the last of its kind in Tbilisi. 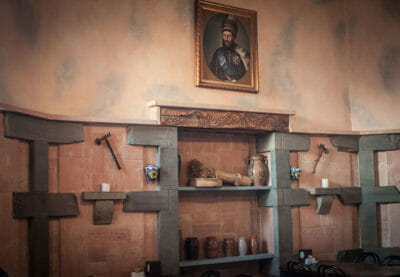 For dinner east Georgian-style there is no better place than Kakhelebi, which was Tbilisi’s best-kept secret until we let the cat out of the bag. Located at the edge of town on the road to Kakheti, Georgia’s famed wine region, this is country food the way owner Chichiko Goletiani sees it. Nobody in Tbilisi makes traditional food like this – honest and original. The ingredients come from Goletiani’s farms in Kakheti, including the goat (when in season), which he roasts on a skewer or prepares in a plethora of tomatoes, fresh herbs and spices. His naan-like bread and salads of wild greens are atypical for restaurants, as are his operating hours. This is where you can indulge wisely. There is no khachapuri on the menu, although the cooks will make it on special request. The waitstaff will discourage an additional order of khinkali by stressing that it will take up to an hour to make them. They understand that the best way to your heart is to not stuff you as if this is your last meal.