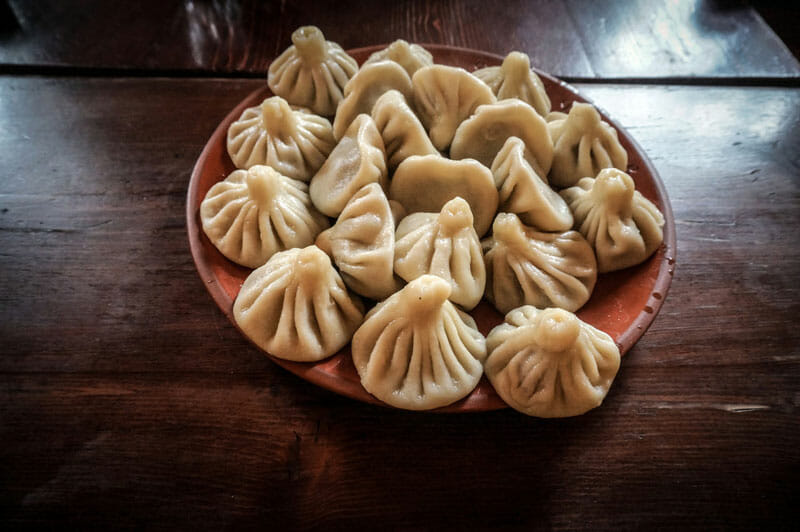 In Tbilisi, we have mornings when we wake up wrinkled and dehydrated, and as we lie in bed knuckling the sleep from our eyes, we hear an all too familiar chorus beckoning us to “bite me, slurp me, gobble me down….” That is khinkali singing, and when you hear the melody, your day has been cast. You can forget about work and responsibilities.

We used to fritter away our afternoons with a platter of khinkali at Pasanauri, but when it changed owners and attitude and our beloved waitress Irma packed her bags, it was clear an era had passed. A period of pretty good khinkali at pretty good restaurants followed until we asked local filmmaker and fellow gastromaniac Levan Kitia where he goes for khinkali.

“Zakhar Zakharich,” he said without hesitation. “I love their lamb khinkali. I don’t think anybody in Tbilisi makes them with lamb, and they make them entirely by hand, mountain-style.”

The restaurant is located under the Dry Bridge flea market near the Mtkvari River and is named after a benevolent late-19th-century restaurateur who kept a table in his chain of dukanis (taverns) reserved to feed poor people for free. It is a legacy the restaurant’s owners convey through the care and consideration they put into the entire food-making process. In a city with hundreds of restaurants offering more or less the same menu, those are the details that make all the difference. 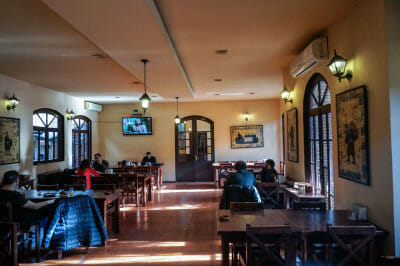 Khinkali, which originated in the high Caucasus, are traditionally stuffed with lamb or mutton, but down here in the lowlands, pork or a mixture of pork and beef is the norm. And because a typical Georgian restaurant can sell thousands of labor-intensive khinkali a day, the dough is machine-mixed almost everywhere you go. Zakhar Zakharich is one of only two restaurants we know of in Tbilisi that mix the dough by hand (the other being Sofia Melnikova’s Fantastic Douqan), which makes for a stickier and fluffier khinkali. The place employs four people just to mix the dough, and on an average day they make about 1,500 khinkali.

While our plan was simply to see if the khinkali was all that it was cracked up to be, we found too many distractions on a menu full of temptations. In addition to the conventional khashi (tripe), kharcho (beef and rice) and chikhirtma (chicken) soups, Zakhar Zakharich also prepares chanaki (mutton and eggplant), tatariakhni (beef broth and greens), piti (mutton broth and peas) and ukha (a fish soup they make with Norwegian salmon).

We had to order chkmeruli, a four-consonant impossibility that translates to chicken baked in a heap of garlic. It is a simple, yet luscious dish we order to measure a restaurant’s quality. Is the chicken skimpy, tough and dry? Is it over- or undercooked? Or has the cook tried to hide the chicken’s age under a kilo of garlic and a basin of cream? You know Zakhar Zakharich has nailed it when all you hear at the table is the murmur of “yummm” and see a growing collection of bones sucked clean and dry.

One key to their toothsome success is that they buy their meat daily from trusted butchers and never, ever use day-old or frozen meat. Moreover, they offer wine from their own vineyard in eastern Georgia and distill their own chacha, a deliciously potent elixir akin to grappa. 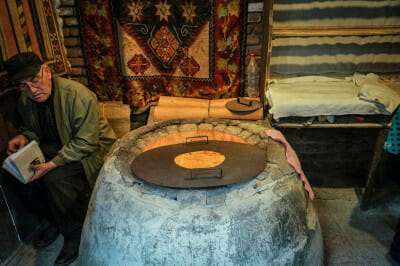 As for the khinkali, Kitia highly recommended the lamb, but Zakhar Zakharich also has beef, herb-infused beef and pork kalakuri, as well as mushroom, potato, sulguni and cottage cheese varieties. Khinkali is a serious dish ordered by the dozen. Ask for fewer than five and the waitperson won’t even say “no.” They will just ice you with a click of the tongue and an expression reserved for utter morons. We took a gamble and asked for three of each and our waitress didn’t bat an eye. She returned with plump fig-sized dumplings, a bit smaller than most places serve, but the proportion of stuffing was perfect. Some joints cut corners and skimp on the meat, a telling sign of a lack of character. The mushroom khinkali were packed with wild mushrooms and fresh coriander and tasted nothing short of earthly divinity. Likewise the meat khinkali – including the lamb ones – which were so tender and succulent that we even ate the dumplings’ doughy nipples.