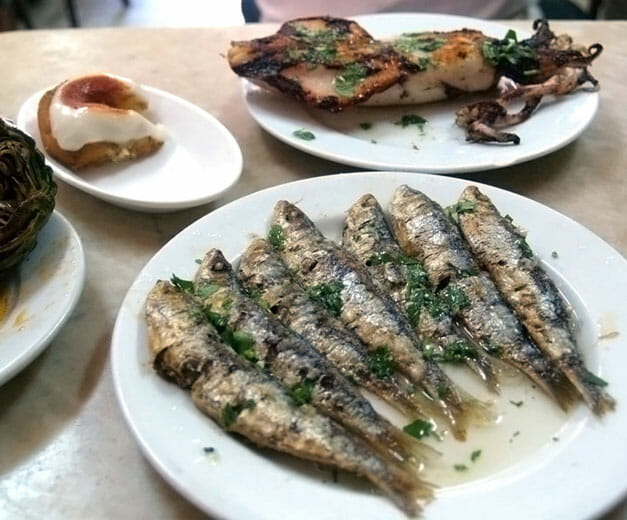 Editor’s note: We asked writer Anya von Bremzen where she heads first for food when she arrives in Barcelona. She is the winner of three James Beard awards, a contributing editor at Travel + Leisure and the author of five cookbooks, including the recently published Mastering the Art of Soviet Cooking: A Memoir of Food and Longing.

Most Barcelona tapas haunts, old and new, pay homage to the bares de producto, the astounding ingredient-laden kioskos (dining stalls) of the buoyant Boquería market. It might be crowded and touristy but on my first morning in town, Boquería is still my Holy Grail. The best time to go? Around 10:30 a.m., when the stalls are less crowded between lunch and dinner.

Right by its entrance, I stop to pay my respects to the legendary chickpea-and-butifarra sausage stew at Pinotxo. Its owner, the venerable Juanito Bayen, is now nearing 80 but looking dapper as ever in his satin vest and bow tie. Juanito is still a maestro of counter banter, spiking coffee with brandy for dour resident fishmongers, plying Japanese tourists with pristine razor clams, smiling for cameras next to Ferran Adrià.

What will happen when he’s gone? Will the entire city feel orphaned?

I drown my melancholy in thin flutes of bubbly cava at Kiosko Universal, where some 20 kinds of Mediterranean sea creatures – from humble sardines to ferociously expensive live langoustines – glisten on ice, awaiting a gentle sauté in garlicky olive oil or a brief hot stint on the plancha.

Next I say hello to one of my favorite chefs in the city, Quim Marquez of the nearby El Quim de la Boquería. “We are the world’s smallest restaurant with the biggest pantry,” Quim quips. I watch him prepare a succulent nugget of bacalao under a cap of candied tomato sauce zapped with ginger purée. The dish is a revelation – as is everything that emerges from this grand, pocket-sized kitchen. And I never miss Quim’s huevos con chipirones, eggs sizzled with ethereal dime-sized baby squid.

Deeper into the market, Ana Gambeta, of the tourist-friendly Bar Central, hawks her baked dorada (bream), her butifarra with white beans and her tripe casserole – in five languages. Too bad I can’t muster even a bite. I must be back the next morning.

Come late lunch I’m in Barceloneta, the gruff fishermen’s quarter, where laundry still flaps in the wind despite rampant gentrification. Nostalgic barrio types hold back the clock with the rich, frothy, German-style ale at El Vaso de Oro, a dark, narrow bar where the city’s snappiest countermen might break into spontaneous song along with the regulars. Foie gras escalopes are slapped onto griddles like burgers; the patatas bravas –served with both allioli (garlic mayo) and piquant tomato sauce – remain unsurpassed.

And then it’s Bomba Bar Cova Fumada, a few blocks away. Through an unmarked door, I wedge myself into the thronged worn marble bar. Ten to 20 euros buys me grilled sardines, supernally crisp bacalao fritters, and bomba, a crisp meat-and-mashed-potato cannonball doused in an explosively fiery sauce. Another glass of cava – and it’s time for a siesta.