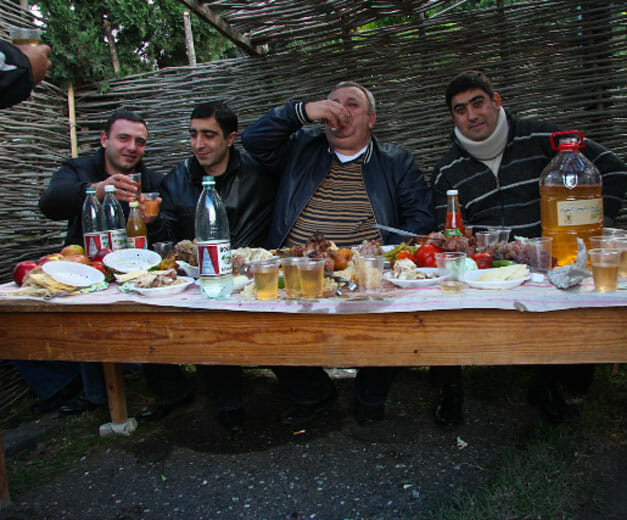 Tbilisi: State of the Stomach

Editor’s note: We are marking Culinary Backstreets’ third anniversary with expansion into our seventh city, Tbilisi, whose extraordinary culinary pleasures remain one of the world’s best-kept secrets.

The taxi driver almost sideswiped a bus and nearly ran over a scurrying jaywalker when he looked back at us with a gleam in his eye and a cigarette in the corner of his mouth and asked, “You like Georgia? Georgia wine? Georgia food?” It’s a three-in-one question we’ve been obliged to answer hundreds of times with a sincere “We love it!” This amounts to a personal declaration of love, for Georgians are infinitely proud of the rich fracas of bold dishes inherent only to this little Black Sea country of 4.5 million. But don’t let their smiles fool you; gastronomy is all tradition and the people here take their heritage seriously. Georgians do not dine alone and do not drink alcohol without an accompanying platter of food, even if it’s a simple contribution of bread and cheese. Eating is a ritualistic affair with strict table rules. Unlike in the West, there are no individual courses. A meal is a feast with a bounty of various hot and cold dishes literally stacked upon themselves that each person shares.

Tbilisi food culture goes back to the middle of the 5th century, when, according to legend, King Vakhtang I Gorgasali lost his falcon on a hunting trip and found it poaching with a pheasant in a sulfur hot spring. Thus, a city was born. Tbilisi grew to become a multiethnic metropolis and trading hub on the great Silk Road. Roman, Arab, Persian, Byzantine, Turkish and Russian guests and occupiers have all left their indelible mark on Tbilisi, but they never managed to really conquer the Georgians, who are the real masters of subjugation. Their weapons are food and wine.

The city is a melting pot of a little over 1 million people. It’s a collision of modern and ancient, neither Europe nor Asia, singularly “Tbilisi,” where tradition is the overriding theme. Walk down a given street and you will smell the seductive aroma of fresh bread wafting out of old cellar bakeries, baked in cylindrical clay ovens just as it always has been. New wine shops offer bottles of family-produced vintages made with the same organic methods that have been practiced for thousands of years. Alternatively there’s the neighborhood dealer, who sells homemade wine and chacha, Georgian grappa, in plastic Coke bottles from his makeshift shop. For snacks, little window nooks sell khachapuri (cheese bread), lobiani (bean-stuffed bread) and other pastries stuffed with potatoes, mushrooms or tarragon and rice.

Because food and wine play such a significant role in the nation’s social and cultural character, it’s no surprise that there is a profusion of restaurants in Tbilisi. Some specialize in specific regional dishes or offer a spectrum of Georgian recipes, which people somehow never tire of. Nothing comes out of a can; the freshest of seasonal ingredients are used to make dishes like chakapuli, a tarragon, cherry plum and lamb stew we must wait all winter to indulge in.

Georgian cuisine has long been celebrated by Russians and other ex-Soviet peoples who hopped cheap flights from Moscow, back in the day, to gorge on Georgia’s respected fare of khinkali (boiled dumplings), mtsvadi (broiled skewered meat) and kabobi (broiled ground meat with herbs). When the Iron Curtain fell, a decade of political and social chaos followed, and Georgia became renowned for crime and corruption, while its culinary sumptuousness remained one of the world’s best-kept secrets. Those nefarious days, however, are a part of the past. Tbilisi is now considered one of the safest cities in Europe and is seeing an upsurge in tourism, which means more people are discovering the wild culinary spirit that is the heart of Georgia.