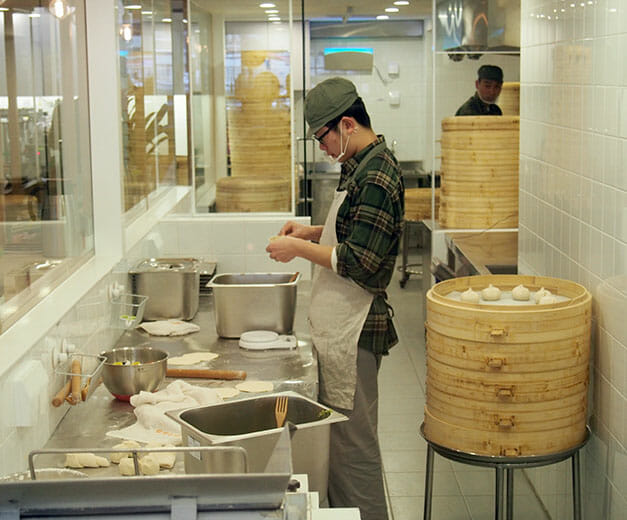 Bāozi (包子), or steamed buns, are a basic, on-the-go meal. It’s rare to come across a shop selling these buns for more than 1.5 RMB (US$0.25), and yet, the past five years have seen a dramatic rise in the stature of this humble dish – thanks mostly to celebrity chef David Chang, whose Momofuku pork bun has become world-famous. They even got a domestic boost in 2013, when President Xi Jinping visited a local 60-year-old baozi shop in Beijing. (Now, thanks to an hours-long queue to try the “President Special,” that chain is looking to go public.)

Legend has it that baozi date back to the Three Kingdoms period (A.D. 220-280) and are credited to Zhuge Liang, a renowned military strategist who was also an eccentric foodie. He invented both this steamed bun and our favorite breakfast treat: the jianbing. (He is also said to have invented landmines…. So not all good things.) Originally from the northeast in Shandong province, Zhuge headed south on a military expedition when his soldiers came down with a plague. He created a head-shaped bun to use as a faux human sacrifice to the gods, then later fed his troops the beef- and pork-stuffed buns. They rallied, and the buns became a legendary food. Originally called mántou (馒头, “flour head”), they later became known as baozi, as “bao” means to wrap something, in this case the meat or vegetable filling. Today, mantou refers to the same steamed bun, but one that has no filling.

Chinese cuisine often steams or boils rather than bakes its staple grains (think rice), and the same thing is done here. Yeast is added to wheat dough, which is allowed to rise, and then it is stuffed with a raw filling (everything from savories, like plain pork and green vegetables, to sweets, like egg custard or red bean paste), wrapped by hand using a pinching style until closed and placed on top of boiling water in towers of giant bamboo steamers. Vendors typically fleck the seam on top of the bun with a bit of the filling so they can quickly recognize which level of steamer has what variety of bao.

Momofuku’s headline-making pork bun is based on the open-mouthed variety most commonly found in Taiwan. Called guā bāo (割包), where gua means to slice or cut, they look like clamshells and are sometimes called “Chinese sandwiches.” It’s not uncommon to see pun-ny food trucks (Bao Down, anyone? Chairman Bao?) stuffing the bao with bacon and eggs for breakfast, or for lunch, Korean-inspired short ribs, Mongolian-influenced beef or the more traditional pork belly.

In Shanghai, you can still find traditional bao most hours of the day, but it’s really at its most popular as a portable breakfast snack. Typical fillings include plain or spicy pork (鲜／辣肉包, xiān/là ròu bāo), bok choy or leek, 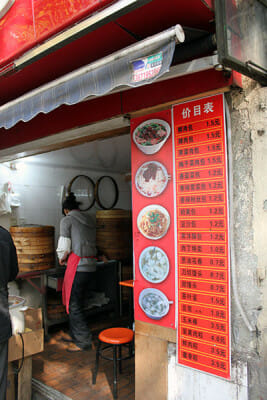 tofu and sometimes mushroom (菜包, cài bāo), sesame paste (芝麻包, zhīma bāo), red bean paste (豆沙包, dòushā bāo) and custard (奶黄包, nǎi huáng bāo). The popular chain Babi Mantou has literally hundreds of shops throughout Shanghai, so keep an eye out for them in many neighborhoods. Here are some of our other favorite places to grab a bao:

In the shadows of the mammoth Shanghai library, this hole-in-the-wall stall does a great version of the custard bao, but make sure you get there early to secure one if you like sweet breakfasts. The juicy plain pork buns are a winner, too. And, if you’re lucky, you’ll make some interesting literary friends in line grabbing a snack before they head into the library. We once received our buns with a lecture on the side, spanning topics from Shanghai’s open port policy toward German and Austrian Jewish refugees before World War II to the excesses of the Cultural Revolution.

One of our favorite places to get mantou is on Shouning Lu, the city’s seafood street. A Jun’s specialty is their crawfish, but they also grill delicious skewers, known as chuanr (串儿), including two takes on the unstuffed bao. Whole steamed mantou are sliced into inch-thick pieces, then skewered, lacquered in oil and cumin and grilled above a coal fire. These smoky pieces make a great edible plate when you order grilled eggplant smothered in garlic. They also serve bite-sized mantou, grilled and drizzled in condensed milk for a sweet after-dinner snack.

Jenny Gao and Alex Xu, Canadian-Chinese Shanghai residents, are standing on the shoulders of David Chang. The global bao trend finally made it home again when the pair opened Baoism in late 2015 after a year of successful pop-ups around town. You’ll find fusion-friendly options like KFC (that’s Korean fried 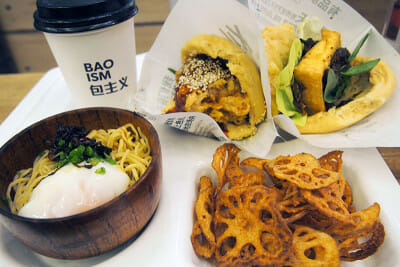 Un upgraded offshoot of a well-established Hangzhou-based chain, GanQiShi (甘其食), this bright, modern baozi shop looks to be the future of street food in Shanghai and beyond. With its meticulously clean space and focused technicians behind a wall of glass carefully weighing wrappers and mixing delicious stuffings, like sweet-and-sour lotus root and apple barbecued pork, BaoBao might just take over the competition. Sure, their buns are marked up to about 5 RMB instead of the 1.5 RMB you’ll find streetside, but this sterilized version provides extra peace of mind at less than US$1 per bun – a price Shanghai residents seem more than willing to pay.