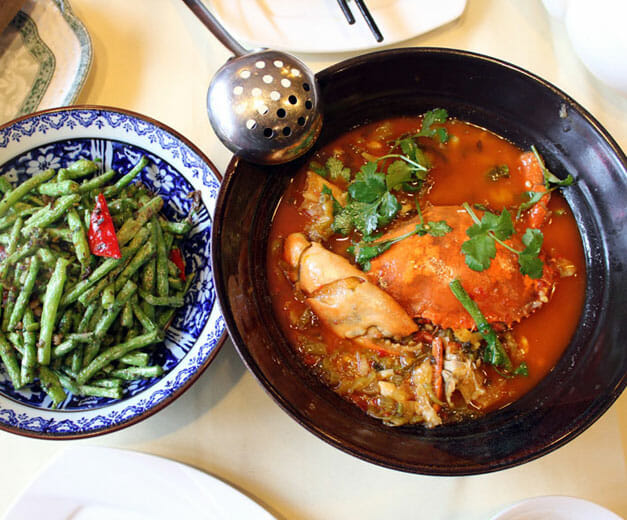 Editor’s note: We regret to report that Deng Ji Chuan Cai has closed.

Though giant pandas subsist almost exclusively on one single plant – bamboo – the same would not stand for the other, more human, natives of Sichuan province. Its capital city, Chengdu, was once famed as the start of the southern route of the Silk Road, along which exotic vegetables and spices were ferried inland from Burma, India and around Central Asia.

The region’s ideal geographical features also allow for a wide range of cultivation and food gathering. As a result, Sichuanese cuisine is so varied that there is this saying: “Each dish has its own style – a hundred dishes have a hundred different flavors” (一菜一格百菜百味, yīcài yī gé bǎi cài bǎiwèi). UNESCO recognized the region’s devotion to the preservation and promotion of its food culture in 2010, naming Chengdu a “City of Gastronomy” – the first Asian city to receive the honor.

Although we didn’t quite eat our way through 100 dishes, it’s clear that this principle is at work at Deng Ji, where the chefs showcase the cuisine’s complexity by utilizing a wide range of spicy flavors. With at least 15 different chilies found in traditional Sichuan cooking, there’s certainly plenty for them to work with. Located near Shanghai Jiao Tong University on Dingxi Lu, a strip full of good-value restaurants and plenty of hidden gems, Deng Ji doesn’t go for flash or pizazz, opting instead for minimalist, dark-wood decorative features and dim, recessed lighting. Instrumental versions of Chinese love songs play softly overhead.

We always start with a cold appetizer of marbled pork (蒜泥白肉, suànní báiròu). In this dish, thinly sliced rolls of fatty pork sit half-submerged in a crimson lake of viscous chili oil. Smoked chili paste smolders at the surface, topped off with finely diced garlic and sesame seeds, which add texture to the melt-in-your-mouth pork belly. Another chilled appetizer to get your blood going is the bamboo and shredded chicken (竹笋鸡丝, zhúsǔn jīsī). Like the pork, the poultry is shellacked in chili oil and sprinkled with sesame seeds, 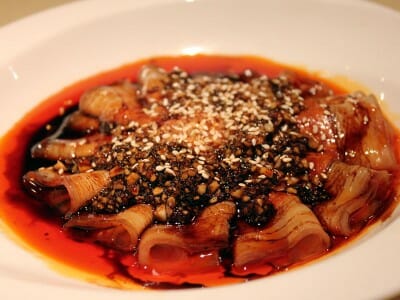 then tossed with crispy bamboo slivers. The chicken and bamboo, although barely distinguishable from one another when gussied up in all that red sauce, play a texturally tantalizing game, alternating between tender meat and crunchy vegetables.

The menu is vast, but right up front you’ll be presented with the restaurant’s star attraction: it’s really all about crab here. The price fluctuates with the market rate, the size of the crustacean (measured in jin – equal to 500g) and the grade (we choose 肉蟹, ròu xiè, for mostly white meat; there is also the slightly more expensive 膏蟹, gāo xiè, if you like the roe). You’ll even be asked for your personal tableside approval of the live crab they’re about to stew, in one of the most delicious broths we’ve ever tasted. Ever.

Fully utilizing the five elements of Chinese cooking (sweet, sour, bitter, spicy and salty), the rich broth of the “traditional jar crab” (老坛子蟹, lǎo tánzi xiè) soaks through the crab’s brittle shell, infusing the meat with a complex soup stocked with fiery white chilies, bitter garlic, pickled Chinese long beans and preserved Chinese cabbage. Despite the cacophony of flavors, none overpowers the others; the contrasting flavors subtly enhance each other while electrifying the palate in perfect unison. The dish’s strong flavors are due in large part to the traditional crunchy pickled veggies bobbing in the broth. Renowned throughout China, Sichuan pickling is traditionally done in large earthenware jars (lǎo tánzi) and with a specific type of salt found in the province at Zigong. In the same way that families pass down the ancestral teapot to give future generations a more nuanced and flavorful brew, the secret to Deng Ji’s crab broth recipe may lie in the top-notch Sichuan pickles and their traditional fermenting jars that are used year after year. You’ll want an order of rice (白米饭, bái mǐfàn) to pour the excess broth over, but it won’t come until the end of the meal unless you ask for it specifically when the crab comes.

As at most Chinese restaurants, it’s best to eat family-style in a large group in order to enjoy the full range of dishes on offer here. Though the long menu makes it difficult to decide what to order, you’ll be thankful for all the choices after you try the first bite. That’s all it takes to know that you’ll be coming back for more.

This review was originally published on March 5, 2013. 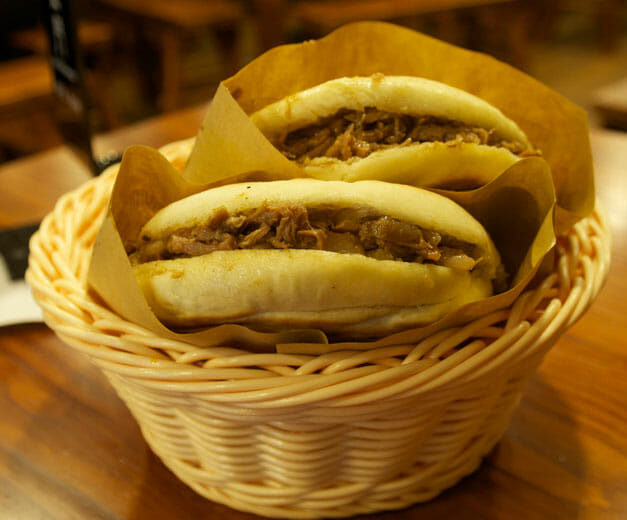 Shanghai | By Jamie Barys
By Jamie Barys
ShanghaiUnwieldy English restaurant names often lose a lot in translation. Take Zhu Que Men, or “The Gate of the Vermillion Bird.” The name, which draws on Chinese astrology and Taoism, might seem a little highfalutin’ for a home-style noodle joint, but the subtext speaks volumes. Ancient Chinese scientists paired an animal with each directional point… 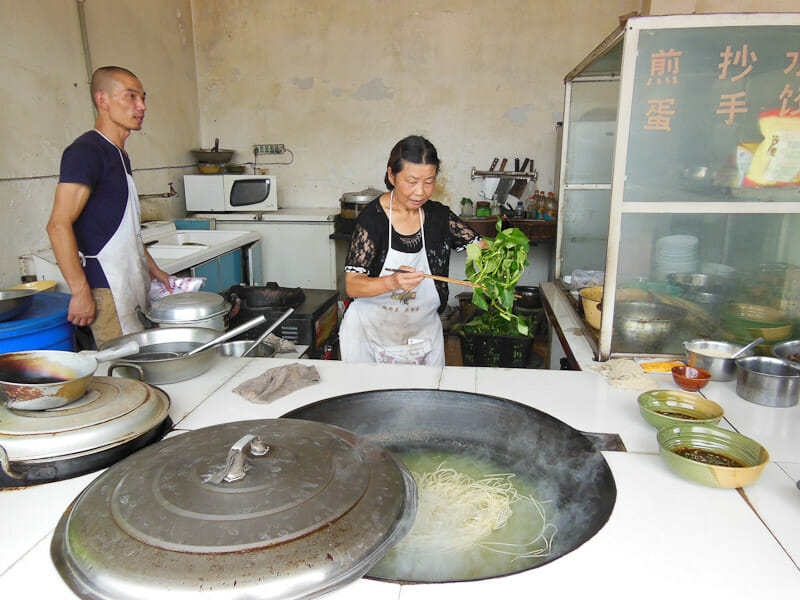 Shanghai | By Jamie Barys and Kyle Long
By Jamie Barys and Kyle Long
ShanghaiGood service in China is a relative term, and the longer you live here, the lower your expectations sink. The Michelin Guide allegedly won’t deign to cross over the Hong Kong border into China because they refuse to sully their white-tablecloth reputation by doling out stars to restaurants with subpar service. But the inspectors must…
Deng Ji Chuan Cai
737 Dingxi Lu (near Yan’an Xi Lu)
定西路737号(近延安西路)
Tel. +86 21 6281 0449
Hours: 11:30am-2:00pm & 5-10pm
Menu: Chinese & English/picture menu