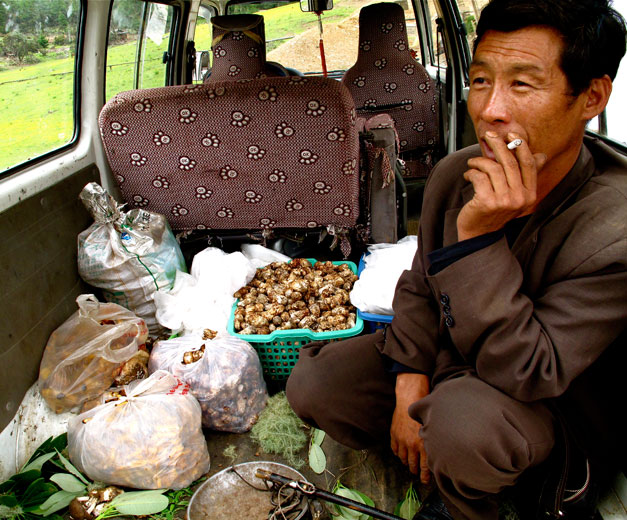 There’s a light scent but not much taste to the fresh truffle we just picked up from a local Chinese market. On a tea scale it weighs in at 18 grams and is the size of a healthy walnut. This year’s price for fresh truffles from France or Italy is many times more than the roughly US$6.50 price tag for this earth-coated Chinese truffle (松露, sōnglù). The substantially lower price reflects the Chinese truffle’s lack of flavor compared with the pungency of European specimens. One of these black nuggets could generously feed four in any Western dish, but Chinese cuisine seldom involves the truffle. Here, frozen or even dried in slices, truffles might be used to float their light essence into a steaming soup or egg dish. At this price, they are absolutely worth trying.

While native truffles are little valued here, fungi in general are hugely important to Chinese cuisine and medicine. Over 800 varieties of mushroom grow in China, mostly in the southwest province of Yunnan. Fresh and dried mushrooms are equally important and considered completely different ingredients; they are rarely interchangeable in Chinese cooking. A fresh variety of shiitake (香菇, xiānggū) is commonly used in steamed and stir-fried dishes, but the dried version, the far more popular dōnggū (冬菇), is rehydrated for southern Chinese braised and stewed dishes and prized for its meatiness.

Dried mushrooms have a long history intertwined with Traditional Chinese Medicine (TCM), which is rooted in the use of natural plant-based remedies. Most popular in TCM is the reishi (Ganoderma lucidum), or língzhī (灵芝), whose many purported health benefits have been appreciated for 2,000 years. Its bitterness has kept it out of the kitchen.

Chinese cooks prize intense flavor and texture above all else in their mushrooms. The straw mushroom (草菇, cǎogū), which is popular for its slippery texture, especially in provincial Cantonese cuisine, is a gray-brown nub that requires a cut along its outer edge to reveal its stem – and its more familiar appearance in Chinese stir-fries overseas. It’s still hard to find fresh straw mushrooms rather than canned in the U.S. 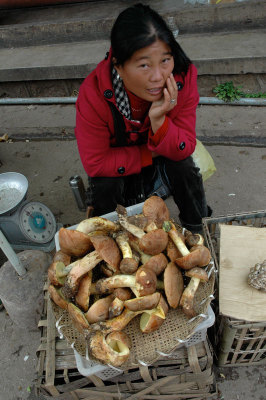 Some mushrooms that are also well known abroad have been given amusingly descriptive names. The revered porcini come in many varieties and are known as the highly marketable “delicious-tasting cow’s liver” (美味牛肝, měiwèiniúgān). One rich, meaty bite, and you’ll see the name isn’t far from the truth. Morels are also valued here and aptly called “lamb’s stomach” (羊肚蕈, yángdǔxùn) for the tripe-like network of ridges on their surface. Bamboo pith, whose Chinese name is zhúshēng (竹笙), or “bamboo gourd,” is thus called for its shape and because it grows near bamboo. The hollow fungus has a delicate ruffled skirt when fresh, with a dark-brown cap. Its phallic form when fresh bears little resemblance to the dried kind that has only the ruffled bit and a crisp, delicate crunch. Mostly used in soups, this mushroom hasn’t got the girth of other meatier types, including the “chicken leg” (鸡腿菇, jītuǐgū) or the long-stemmed, fibrous tea mushrooms that grow near tea trees.

Many flavorless common fungi, such as the black wrinkly wood ear (木耳, mù’ěr), make a great vehicle for a light, delicate sauce, complementing vegetables with a wonderful texture that is at once chewy, snappy and gelatinous. Commonly known as the “snow fungus,” Tremella fuciformis grows as a bone-colored, crisp, ruffled cluster with translucent, petal-like frilly layers. Dried, it takes on the appearance of bleached steel wool; rehydrating makes it bloom to five times its size when dry. The fungus is used in steamed broths and herbal soup tonics and offers a delightful, thrilling crunch.

One of the most precious fungi is the pine mushroom (松菌, sōngjūn), highly prized by the Japanese (who know it as matsutake), which grows near mountain pines and commands some of the highest prices.

The most valued fungus of all is not for gourmands, but rather for medicinal purposes and is a phenomenon of nature. “Winter worm grass” (冬虫夏草, dōngchóngxiàcǎo), or Cordyceps sinensis, is a parasite fungus that feeds on and eventually takes over a larva, sending its stalk-like fruiting body out of the mummified corpse. Harvested in the mountains of Tibet, it can go for thousands of dollars per pound. Mushroom expert Daniel Winkler offers annual tours in Tibet to hunt with locals for cordyceps and morels. 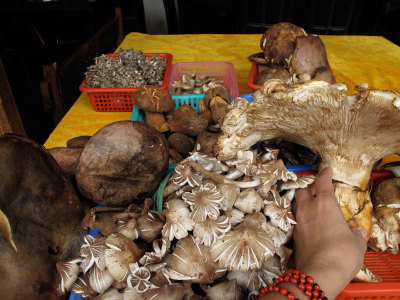 In Shanghai, mushrooms are widely available in just about every kind of dining establishment. On the posher end, there’s truffle and foie gras soup dumplings at Din Tai Fung as well as a variety of spicy, vibrantly flavored dishes at Lost Heaven, an elegant Yunnanese-inspired restaurant with two branches in Shanghai and one in Beijing. Mia’s Yunnan Kitchen, Lotus Eatery, Beyond the Clouds (233 Nanjing Dong Lu, 5th floor, Huangpu, tel: +86 21 5306 5757) and Ganlanba (1025 Meihua Lu, Pudong, tel: +86 21 5059 6282) serve authentic Yunnanese fare, offering up a taste of the province’s extraordinary natural bounty, including many kinds of indigenous mushrooms. Almost every hot pot restaurant will offer a mushroom broth, but among the best is Hai Di Lao, which also offers a basket of mixed fresh mushrooms to be boiled in the broth. Vegetarian restaurants are particularly adept at mushroom wizardry, and Ji Xiang Cao (also known as Lucky Zen) is notable for using fungi in numerous deliciously innovative ways.

For home cooking, there are, of course, many, many more kinds of fungi than what we’ve described here; you need only visit your local wet market or wander the aisles of a dried foods shop to see the sheer breadth of Chinese mushroom appreciation and connoisseurship. They’ve had thousands of years to acquaint themselves with the many varieties and to master their uses, and it shows. 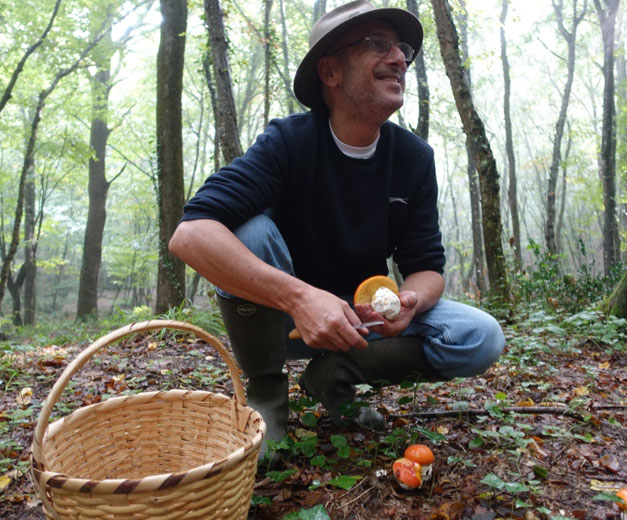 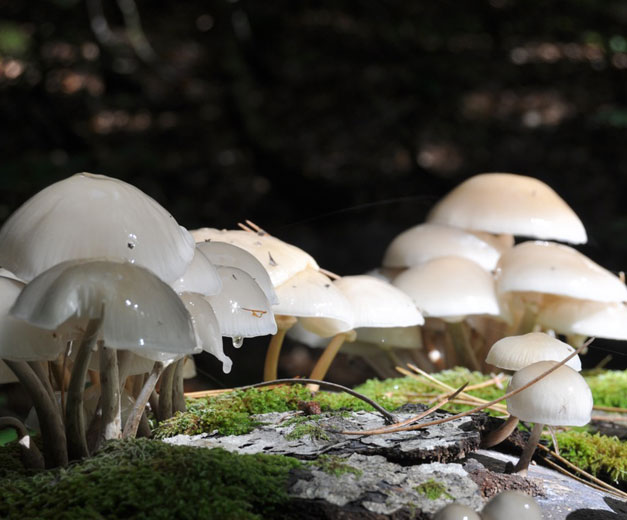 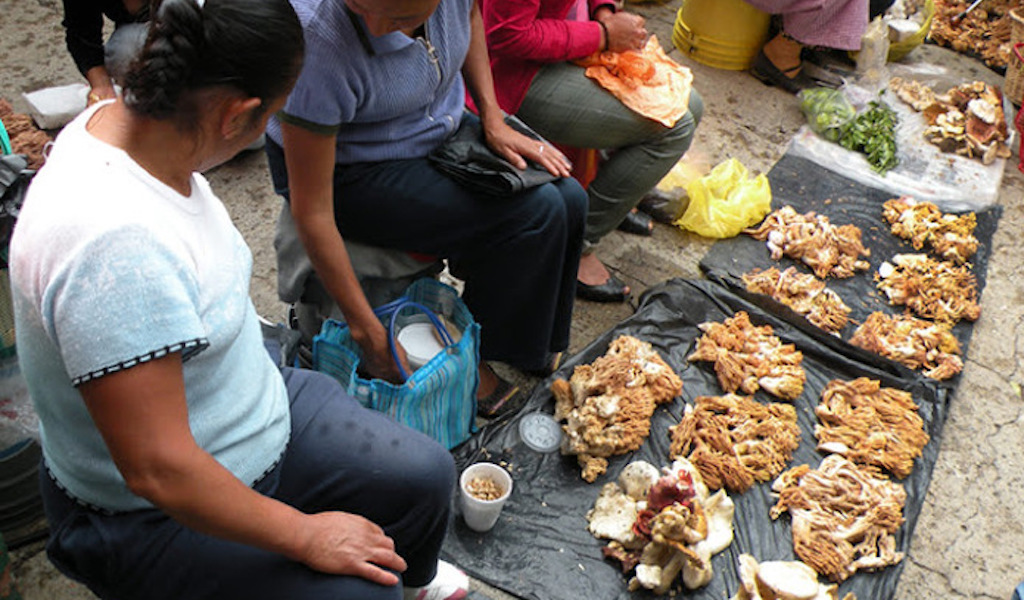 Mexico City | By Nicholas Gilman
By Nicholas Gilman
Mexico City In Mexico, the land of eternal spring, something good to eat is always in season. We ravenously await the arrival of artichokes in March, mangos in April, fresh corn in September. Even the wriggly little gusanos de maguey (maguey worms) which appear in May are wildly anticipated – by some. Change in season…