For a Chinese city as fast-paced and increasingly cosmopolitan as Shanghai, there are surprisingly few late-night dining options that don’t involve ordering from the roving, streetside pushcarts that hawk grilled skewers or fried rice and noodles. Unfortunately, these midnight vendors are not always where you want them to be when you need them most, after 10 beers. Enter Ding Te Le.

This cozy noodle shop is tucked in a small alley off one of Shanghai’s busiest shopping streets. Reminiscent of the city’s fading longtang (alleyway) cuisine, Ding Te Le’s home-style offerings are Shanghainese comfort food at their finest, with steaming bowls of noodles and deep-fried cuts of meat just waiting for diners at any hour of the day.

Come lunch or dinner, Ding Te Le is packed to the gills with hungry diners holding their tickets and chopsticks while hovering over your booth. Two small tables dot the entry, providing alfresco dining for a lucky few looking to escape the tight quarters inside. A few black-and-white photos of old Shanghai street scenes are the only attempt at décor, but it suffices, since the food itself provides all the important aspects of the meal.

But for those who come for a midnight snack, it’s blissfully calm. It can be intimidating ordering from the vast menu tacked up behind the cashier and illustrated only by Chinese characters, but narrow it down and there are really only three things you need to order.

The bái zhī cōng yóu ròu sī bàn miàn (白汁葱油肉丝拌面) is a challenging mouthful to say, translating clumsily as “white juice scallion oil shredded meat mixed noodles,” but is one delicious mouthful to eat. Deeply caramelized green onions mingle with slivers of pork atop a bed of springy noodles, and a milky bowl of pork-bone broth on the side is on hand for a rich chaser between noodle slurps. For a uniformly mouthwatering experience, mix the noodles 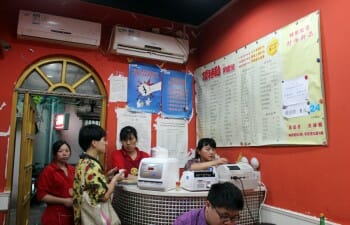 with the scallion oil that collects at the bottom of the deep bowl until each strand shimmers, but don’t let the caramelized onions disappear beneath the mound of noodles – they’re the best part.

For the spice-inclined, the spicy meat with preserved vegetable noodles in soup (辣肉雪菜面, là ròu xuě cài miàn) is a must. Both chili-charged and subtly sweet, the pork broth here really shines. It’s also literally shiny, thanks to a generous splash of chili oil they add to the soup. Slices of tender pork, Chinese cabbage and preserved mustard greens float atop the noodles, adding heft to the steaming concoction.

But Ding Te Le’s pièce de résistance is undoubtedly the fragrant fried pork chop served on the bone (香炸大排, xiāng zhà dà pái); it’s not actually a noodle dish, but something most diners will order on the side of their bowls. An ode to Shanghai’s love of sweeter foods, the dish has a five-spice rub that will leave you licking your fingers and the bones. Drizzle it with the Shanghai Worcestershire sauce you’ll find on the table, devour, repeat. Then go to bed.

This review was originally published on August 9, 2012. 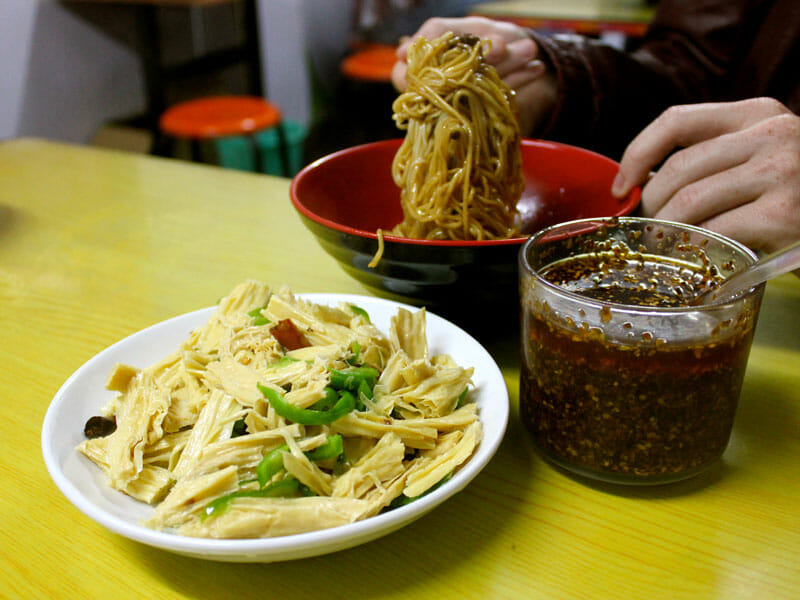 Shanghai | By Jamie Barys
By Jamie Barys
ShanghaiYou could walk past the shoddy exterior of Henan Lamian every day without giving it a second glance, but the noodle shop hidden within is worth a double take. In our six years of eating there whenever the craving strikes (and it inevitably does, several times a week), this hole in the wall has become…