On one of Shanghai’s busiest shopping streets, amidst the glittering Tiffany & Co, Piaget and Apple stores, Guang Ming Cun is housed in a nondescript four-story building. Glass displays in front offer a glimpse of the braised and dried meats for sale, and around the side you can peek in to watch flaky meat pastries being flipped in a flat wok. But it’s the long lines of middle-aged shoppers patiently waiting outside the building that make Guang Ming Cun unmistakable. During Chinese New Year and Mid-Autumn Festival, these lines can reach up to five hours long.

Typically, our advice when you see Chinese people waiting good-naturedly for food is to get in line, but in this case, don’t. Just blow right by the line and walk past the takeaway counters. Upstairs, a sit-down meal awaits in an extravaganza of tiered dining. 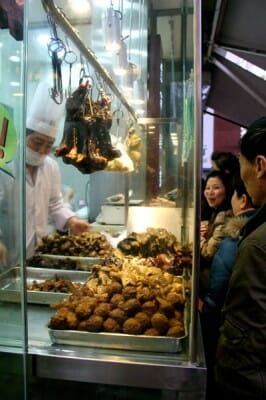 The second floor of Guang Ming Cun is a hectic world of no-reservations dining where fortune favors the ruthless. If all the tables are full, you’ll have to hover aggressively over a diner casually slurping down bowls of noodles and wontons. If you come at off-peak dining times (2-5 p.m.), however, there will be seats free but the menu will be limited. Should you prefer a more civilized waiting experience, head up to the third floor, where there are chairs, tablecloths and hostesses calling out numbers. The fourth floor has private rooms only, but there’s no minimum spending requirement, as is so often the case when booking a bāofáng (包房) in China; only a call-ahead booking is required.

No matter where you sit, the menu is the pretty much the same – and that goes for the reasonable prices, with few dishes ringing up at more than RMB 25. (Though the takeaway counter is marginally cheaper, we find it difficult to justify waiting in line for a discount of mere cents; plus, we’re always eager to eat our food right away.) The menu, on the whole, looks like Shanghai’s answer to Hong Kong’s dim sum: lots of small plates, savory steamed buns, and meats cooked long and slow to tender conclusions.

Take the braised duck (酱鸭, jiàngyā). On the ground floor, it’s unceremoniously tossed in a plastic bag for the trek home. On floors two through four, it’s chopped on the bone after being lacquered with a soy sauce reduction, then plated for sit-down diners. The skin transforms into a sticky-sweet sheen stretched over a delicious layer of trimmed fat and gamey duck. This dish, along with braised duck tendon and beef jerky cooked down with the same sweetened soy sauce, is one of the three biggest sellers at the streetside window.

We’re fond of Guang Ming Cun’s take on the xiǎolóngbāo (小笼包) soup dumpling, which comes stuffed with pork and crab roe (蟹粉, xièfěn). Less sweet than some of the other versions of Shanghai’s favorite dish, the soup packs a wallop of ginger flavor at first slurp, as the pungent root is minced together with the pork during preparation. A dip of the dumplings into particularly astringent vinegar brings the whole dish together. 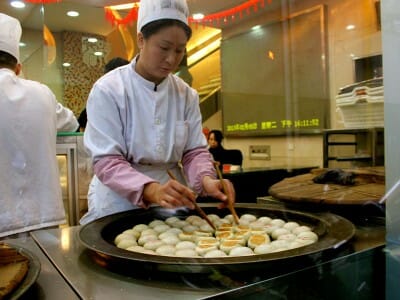 One dish you’ll see on just about every table at Guang Ming Cun is a bowl of steaming wontons (鸡汁馄饨, jīzhī húntún). Cooked in a savory chicken stock that comes watered down as broth, these pork wontons mingle with sheets of salty seaweed, chopped green onions and strips of scrambled egg. Meanwhile, the deep-fried pork cutlet (炸猪排, zházhūpái) arrives tender and crunchy, sitting on a splash of Shanghainese Worcestershire sauce. Without a slip of grease to give away its oily origins, it’s the pièce de résistance that proves that Guang Ming Cun is the master of a genre all its own: Shanghai soul food.

This review was originally published on February 12, 2013. 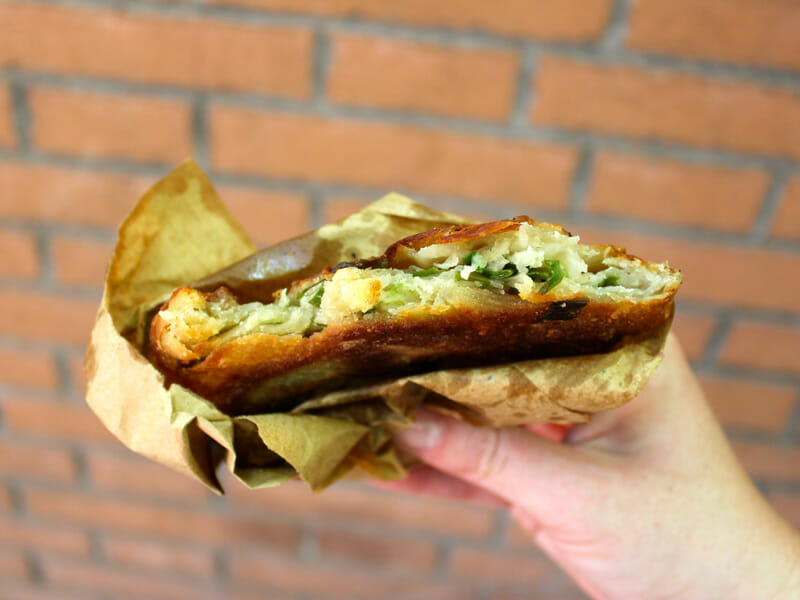 Shanghai | By Jamie Barys
By Jamie Barys
ShanghaiEditor's note: We're sorry to report that A Da Cong You Bing has closed. However, it recently reopened at a new location. In China, where queuing isn’t part of the culture, a long line of hungry diners patiently waiting for their food is just about the highest compliment a restaurant can receive. By those standards,…