Behind the counter at Le Bon Pain in Queens Village, more often than not, is Ghislaine Clervoix, a woman in her 80s who has owned the place for more than 30 years. Ghislaine chats in English and Haitian Creole with her regular customers, a few of whom she’s known for decades and introduces as her “old-school friends.”

Diminutive loaves of French bread are the namesake of the bakery, and plenty of customers come in to buy them fresh; the Clervoix family also bakes large quantities for supermarkets around Long Island and Queens.

On a recent visit, though, the signature bread seemed like an afterthought to most customers, who were clamoring for the bakery’s patties. A Haitian patty, pronounced like the French pâté, is totally different from the goldenrod-colored, thin-crusted Jamaican beef patty that’s ubiquitous around New York City. The Haitian version is made with delicate layers of puff pastry, rich with butter, wrapped around a modest amount of filling. At Le Bon Pain, you can buy your patties filled with well-seasoned beef, chicken, codfish, or vegetables, all for a dollar each. 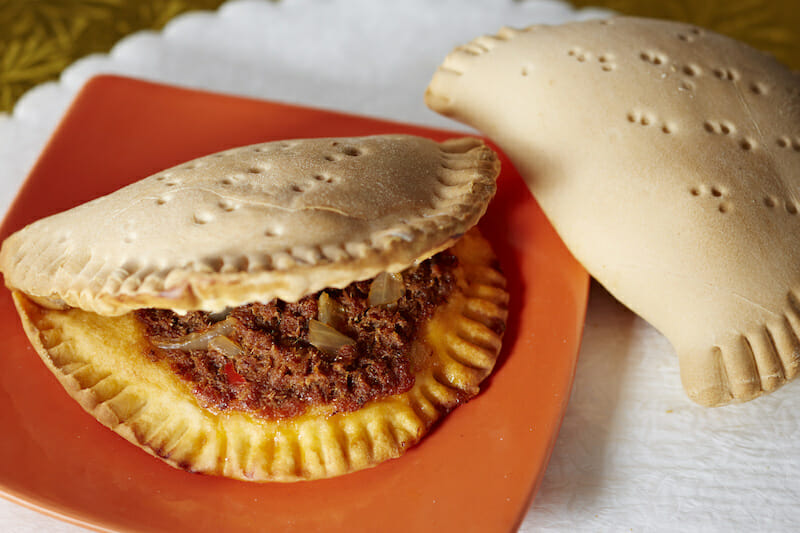 Ghislaine’s son, Michael, who manages the place, explains the patty’s rise in popularity: “Word spread, people took it to their jobs. People just didn’t know about it, so once they try it, they fall in love. Next thing you know, you start to see a whole other ethnic group starting to come in here, ‘cause they all got put on to the Haitian patty.” Once you’ve tried Le Bon Pain’s patty, there may be no going back to any other kind.

Michael wasn’t always planning on working in the family business, and he continues to moonlight as Sha Money XL, a hip-hop producer and manager. 50 Cent, a Queens rapper who rose to fame in the early 2000s, was among the most prominent of his collaborators. “In my older years, I’ve started kinda moving away from that. I still do it, just not as aggressive as I was,” Michael explains. He produced a number of hit tracks for New York rap artists and has now invested his money in his parents’ business, helping them expand and stepping up to his job as manager. “Just for my future, I’m not gonna do music forever,” he says, “my grandfather was a baker, my mother too, and now it’s me.”

“My grandfather was a baker, my mother too, and now it’s me.”

Le Bon Pain traces its roots as a business all the way back to the town of Limbe, in northern Haiti, where Ghislaine’s grandfather Ambroise “Papa Broise” Delamar Michel served as mayor. Papa Broise was also an avid baker, and in 1942 he opened Le Bon Pain to serve the town’s residents. Ghislaine learned to bake bread and sweets from her grandfather, and in 1980 she immigrated to the United States in the hopes of opening her own iteration of Le Bon Pain in New York. After working for years as a baker for Drake’s Cakes, a nationally distributed snack cake company, she finally opened her own bakery in 1988, with help from her husband, Jean Georges Clervoix.

The first Le Bon Pain was immediately next door to the bakery’s current storefront on a broad stretch of Jamaica Avenue with quite a bit of foot traffic; the area has since become something of a Little Haiti. When Le Bon Pain first opened, though, Queens Village could be a rough neighborhood. “It’s changed for the better actually,” Michael says, but the bakery has remained consistent – the only major change to the place was in 2005 when he bought the adjacent storefront that’s now the main entrance. 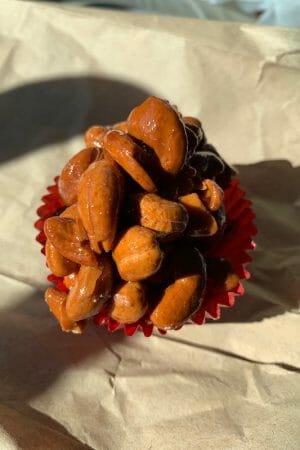 After the bakery expanded, the Clervoix family also began selling a variety of Haitian sweets that are difficult to find anywhere outside of Haiti. These sweets are true things of beauty: douce jus kok, a rich bar of milk fudge; kok graje, a clump of custardy grated coconut; and tablet noix, a cluster of golden, glazed cashews on a brown sugar base that tastes like the best praline we’ve ever eaten.

Le Bon Pain may be the only place in America with such a breadth of Haitian treats. Michael explains that the confectioners who make them come from different regions of the island, each with their own local specialty. “If you’re not from [the coastal town of] Petit Goave, you don’t know about douce makos,” Michael says, “so you don’t even know the secret to how to make it.” The sweets may have their roots in tiny localities back home, but according to Michael, they have caught on with customers in a big way.

Family is very important to Michael, and as he’s moved away from his music career, he’s decided to come to the bakery every day to help out his mom. Ghislaine doesn’t plan on retiring, so Michael says, “I’m with my moms every day so she can stay off her feet.” Moving back into the family business after a long career in music might be a chore for some, but for Michael it’s been rewarding. His sister Marie pitches in to help, and Jean Georges is there most days as well. “You’re with your family,” Michael says, “so it doesn’t feel like a long day at work.”

By
Ike Allen
, photos by
Ike Allen and Courtesy of Le Bon Pain