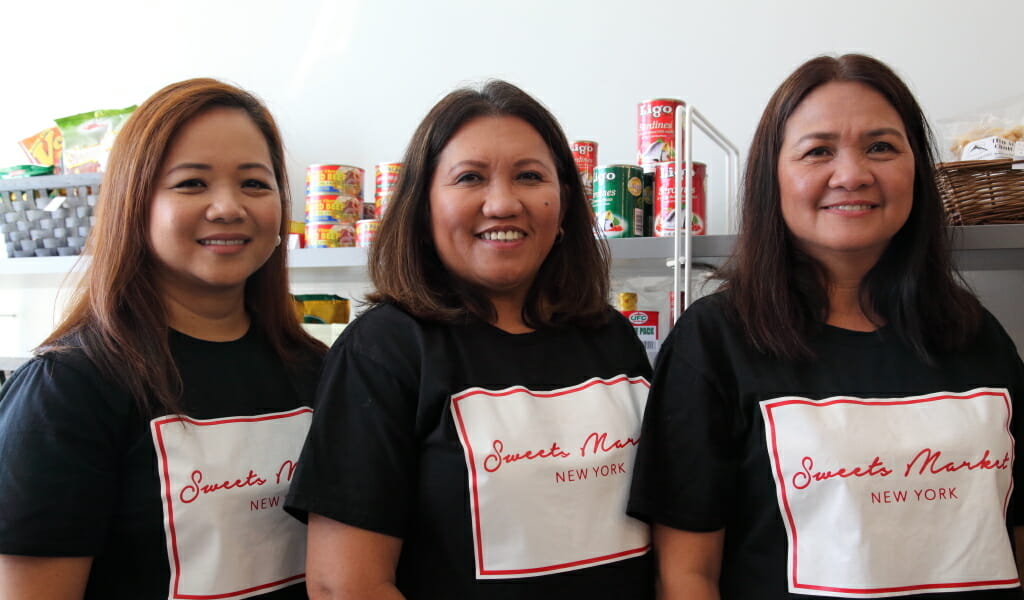 Tortas are modest in appearance – they resemble flattish cupcakes with minimal adornment – but they taste like breakfast at grandma’s to many homesick Filipinas.

And tortas are a common bond between Nora Galleros, Jeanette Uy and Khaterine Gadingan – Khaty, to her friends. Nora, Jeanette and Khaty grew up in the Southern Philippines, on the island of Mindanao, and think back fondly to the food of their home city, Gingoog (Hee-ngo-og).

In 2004, Jeanette remembers, the “first stop when I came to New York” was to visit her high school friend Nora, who had arrived in 1990 and was running her own business. Jeanette, who loves baking so much that she “could forget time” while in the kitchen, brought Nora a little something to accompany her morning kape, or coffee. Tortas, of course.

Not until 2018, however, did Nora, Jeanette and Khaty sit down together, over a restaurant meal at a shopping mall in Elmhurst, Queens, to discuss a possible business partnership. At first they considered an online-only operation. After all, each of them already had a job (and they still do) – Nora, as the head of an accounting firm, Jeanette, as a special-education teacher, and Khaty, as a physical therapist. 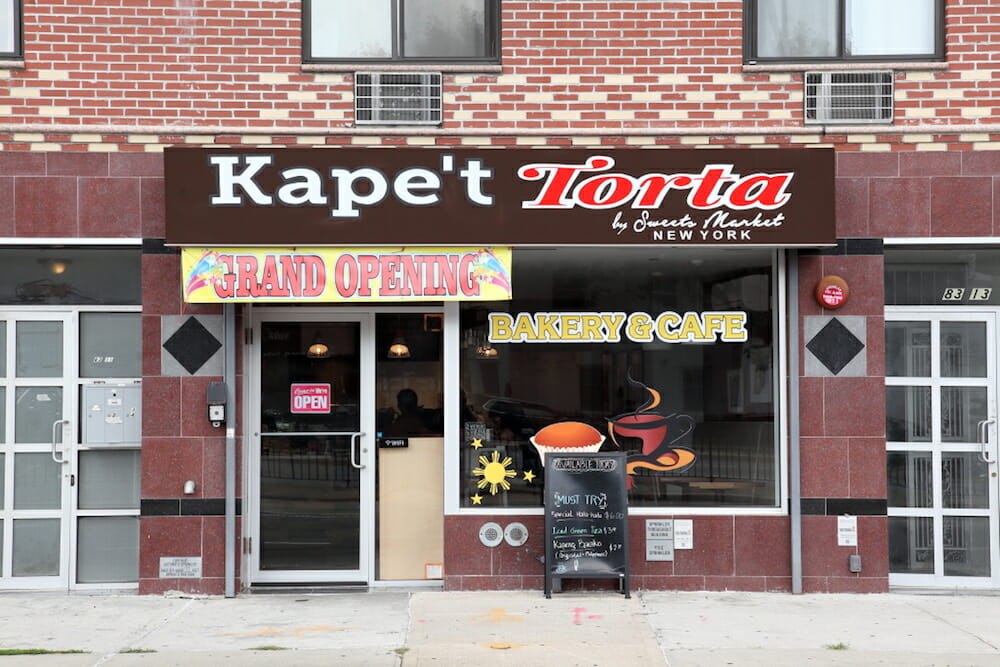 Khaty, however, had spotted for-rent signage on a former nail salon nearby. A bus stop was out front, and a subway station was a two-minute walk away. The space didn’t have the ventilation that would facilitate a full kitchen, but a coffee shop and bakery – a place to enjoy kape and tortas – would fit in just fine.

The very name of the shop, which opened late in the summer of 2019, gives a sense of the casual atmosphere. The apostrophe-t is a contraction of “at,” the Filipino word for “and.” So, then, “Kape’t Torta” means something like “Coffee ‘n’ Cake.”

“We didn’t want it to look like a typical Filipino restaurant,” says Nora. Many of Kape’t Torta’s business neighbors are Indonesian, Taiwanese, Chinese, and South American restaurants, with diners and pizzerias thrown in for good measure. The local residential population is just as diverse. To be “more inclusive,” Nora continues, the women collaborated with the architect on a café design that is clean, even a little industrial, “without going overboard.” Edison bulbs hang above a central high table; the lower tables along one side wall are furnished with abundant power outlets.

Along the other wall is a boutique-like mini-grocery, a common sight in many Filipino eateries. The shelves offer beloved products from all across the Philippines – multiple brands of banana chips, for example. But they also foreshadow a larger effort in which Kape’t Torta might be able, in Nora’s words, to “help, in our small way, the economy of the Philippines.”

Gingoog is an agricultural city with a high poverty rate, Nora explains, and although farmers receive help with production, demand from local markets isn’t keeping pace. Since Kape’t Torta already imports a number of Filipino products for its own use, she asks, “can we distribute [these] on a larger scale” and help create a greater demand in the United States?

One such product might be tablea (tah-Blay-ah), cacao beans that have been roasted, ground into paste, and shaped into “tablets” used to make hot chocolate. In the traditional fashion, tablea is transformed into hot chocolate with the aid of a deep bowl and a wooden whisk, which is clasped between the palms and rotated rapidly back and forth. “Every time we go home,” says Jeanette, “we go to the local market because they do it that way.” 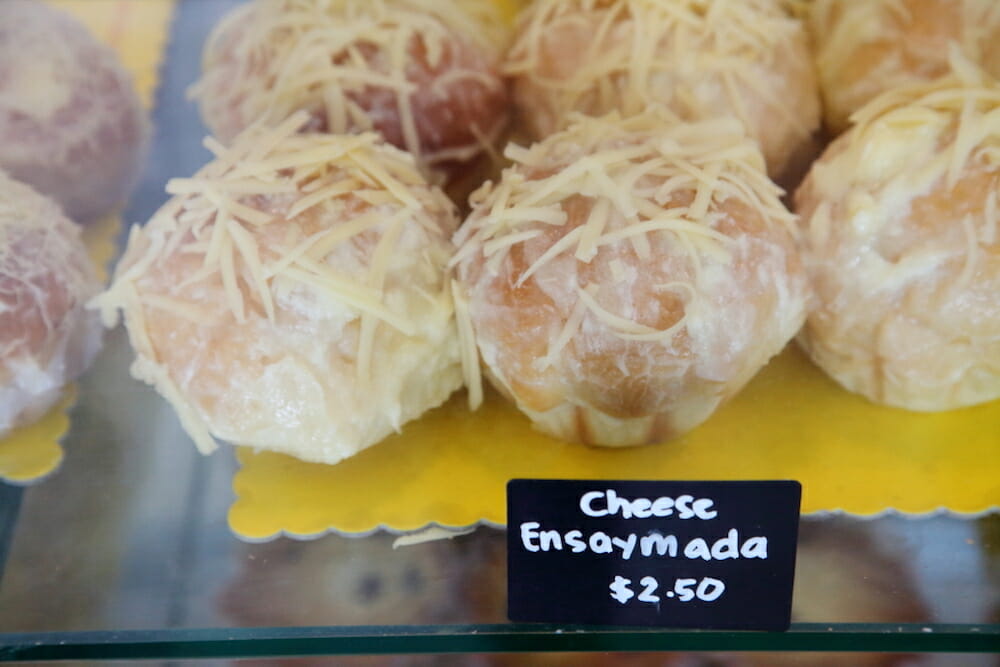 In the often-busy kitchen of Kape’t Torta, a labor-saving electric device stands in for the whisk, but the tablea itself provides a distinctive touch. When we asked Khaty whether she could tell, at a taste, the difference between tablea from Gingoog and elsewhere, unhesitatingly she answered “yes.” Nora and Jeaneatte nodded agreement.

Kape’t Torta also imports Gingoog buko sugar, sometimes called coconut sugar, to sweeten its baked goods. And a dispenser of the granulated tan sugar stands at the ready for customers who order kapeng barako – that is, barako coffee. Prepared from a varietal of Liberica coffee beans, it’s said to be less acidic than Arabica or Robusta coffees prepared to the same strength. (We haven’t attempted a side-by-side taste test.) Kape’t Torta might be the only business in the New York area that serves this distinctive brew.

What goes best with kapeng barako? We’ve delighted in the torta Cebuana, which hints at anise, and in the torta espesyal, so buttery that it brings pound cake to mind. But we’ve also indulged in the cheese ensaymada, a plumper pastry that’s cheesy on top, cheesy in the middle, and sweet through and through. Think of it as a sticky bun with a Gingoog accent.