Throughout Italy, Naples is known as the “city of coffee” – the Neapolitan caffè is synonymous with high-quality brew. And within the city, there are a number of stories and legends that swirl around the black stuff.

Coffee is far and away the most popular caffeinated drink in the city. Neapolitans are not tea drinkers. In fact, most see it as a kind of medicine, probably because when you’re sick to your stomach the doctor recommends eating white rice and drinking tea.

But it’s not just about the coffee itself. In Naples, drinking coffee is a true ritual, a complex set of unwritten norms, customs and ancient habits. Standing, not sitting at the table; adding sugar before the coffee is poured, not after; holding the cup with the right hand, not the left; but that’s just our preference. There are thousands of small options that each person interprets in their own way. 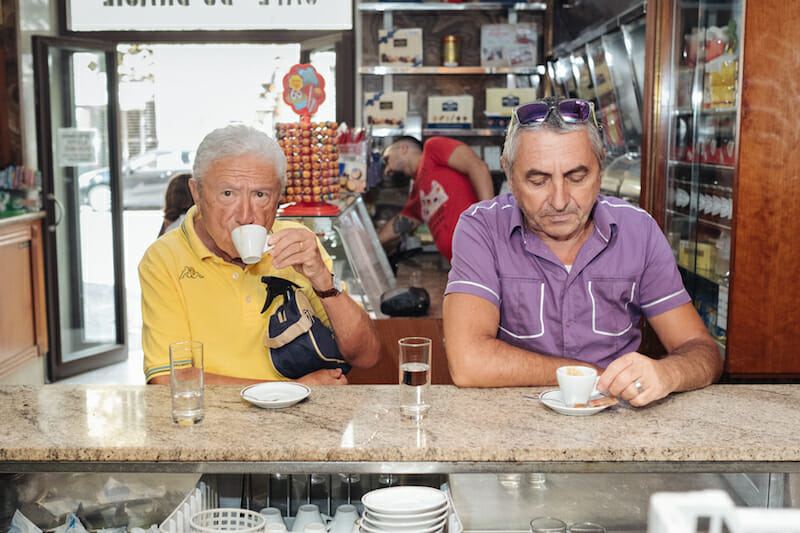 And these decisions are made multiple times a day. There’s the cup of coffee first thing in the morning to get the day started on the right foot, and the coffee on your work break. The best way to approach a woman is to offer her a coffee, and if you meet a friend on the street, invariably one of you will ask, “Want to grab a coffee?” And in Naples you cannot say no to such an offer, it would almost certainly be taken as an offense.

Coffee arrived rather late to Naples compared to other cities in Europe: it was being served in Viennese coffee houses and Parisian cafés many years before it made its way to the Italian peninsula.

It was on account of Queen Maria Carolina, the wife of King Ferdinand of Bourbon, that coffee eventually reached Naples in the second half of the 18th century. She expressed a desire to taste the drink that was so sought-after in Vienna. Coffee quickly became popular with the Neapolitan aristocracy and then spread to the masses, so much so that Neapolitan streets were full of coffee peddlers at the beginning of the 19th century.

Nowadays, a real Neapolitan coffee must have the famous four “C”s.

The first C is corto, or short. The broth that is American coffee and the mugs it’s served in look to us like a dirty cup being rinsed.

The second C is cocente, or boiling. Neapolitan coffee must be freshly made and never reheated.

The fourth C is comodo, or comfortable. You must drink your coffee in an enjoyable way, whether that means at home for breakfast or with a friend in a bar. Although sometimes it’s necessary to quickly gulp it down while standing up. 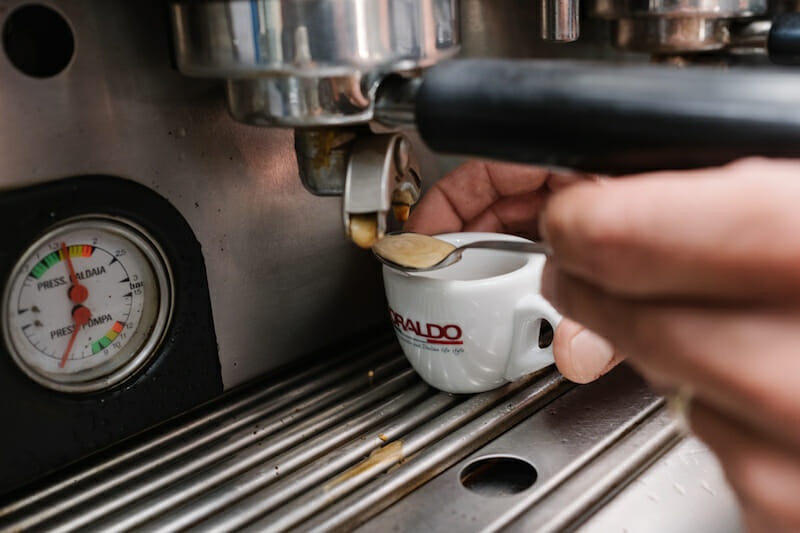 Apart from following these particular rules, there are a number of other reasons why Neapolitan coffee is so good. As for the coffee itself, Neapolitan roasters have the ability to create perfect blends. Since Naples has long been one of the most important ports on the Mediterranean, the best coffee beans have flowed into the city, which has allowed local coffee roasters to do exceptional work.

According to many Neapolitans, it is the local water that makes the biggest difference. We even know some locals who bring bottles of water from the area’s aquifers (which feed into the public water system) with them when they travel in order to make true Neapolitan coffee.

In the past, the real key to the success of the Neapolitan coffee, or at least the coffee made at home since bars only use professional espresso machines, was the caffettiera napoletana, or the Neapolitan flip coffee pot, whose defining characteristic is a spout that faced downwards while the water heats up.

Once the water boils, the pot is turned upside down, allowing the boiling water to filter through the coffee grounds by gravity. This operation can last several minutes, and it is the Neapolitan tradition to place a cuppetiello, or a small paper cone, over the spout so as to preserve the coffee’s aroma.

“Today, hardly anyone wants a simple coffee, everyone wants it special.”

This poetic process was mostly lost with the rising popularity of the moka coffee pot in the middle of the 20th century. Invented in 1933 by Alfonso Bialetti, the moka coffee pot became famous the world over. We even had the pleasure of seeing an Italian moka pot – an icon of Italian design – on permanent display at the Museum of Modern Art (MoMA) in New York City.

Perhaps the best-known urban legend related to Neapolitan coffee is the caffè sospeso, or suspended coffee. It works like this: You order one coffee but pay for two. The cashier will then give this free coffee to a penniless person. Yet paying for an unknown person’s coffee is not an act of charity, but rather the sharing of a pleasure.

Today only a few bars continue the practice of the suspended coffee, and really they do it just to keep up the tradition. In more prosperous times such as these, it’s rare for a poor man to ask the cashier if there’s a caffè sospeso available.

But the suspended coffee is still the symbol of sharing a pleasure. Because the best part of coffee is sharing it, even if it’s with someone you don’t know.

These are two of our favorite spots for a coffee in Naples: 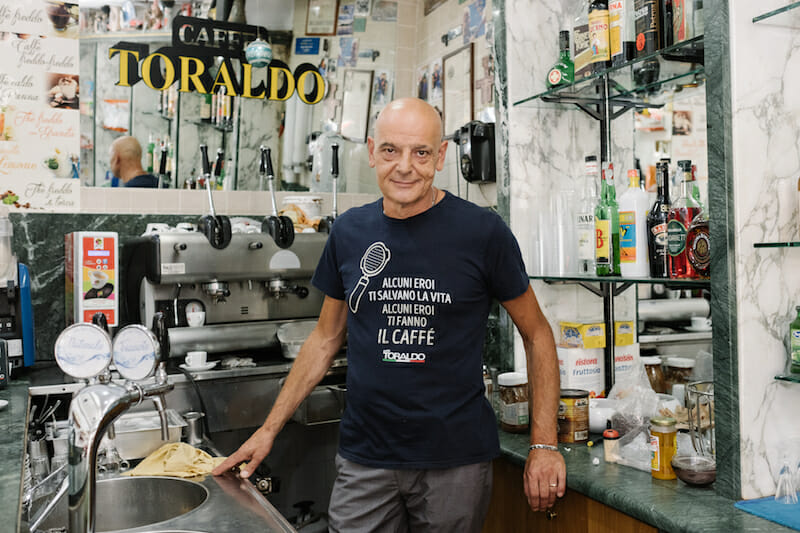 Bar San Paolo is one of the most popular cafés in historic center of Naples thanks largely to Sandro, the man behind the bar. His wife, Carla, runs the cash desk and takes dozens of phone calls a day from people asking for a hot coffee delivery to their home or office.

“I know the preferences of all my regular customers,” Sandro tells us. “Today, hardly anyone wants a simple coffee, everyone wants it special: in a glass, long, very short, stained, foamed, sweetened… in short, a true Babel.”

Located on Via Luca Giordano since 1955, this bar is a local favorite in Vomero, a leafy, middle-class neighborhood. It is open until late, serving coffee to the Neapolitans who frequent the area’s theaters. At the center of the room there is a written full-length: “Su con la vita!” (“Come on with life” or “Come on, life is beautiful”), which is particularly auspicious on bad days. 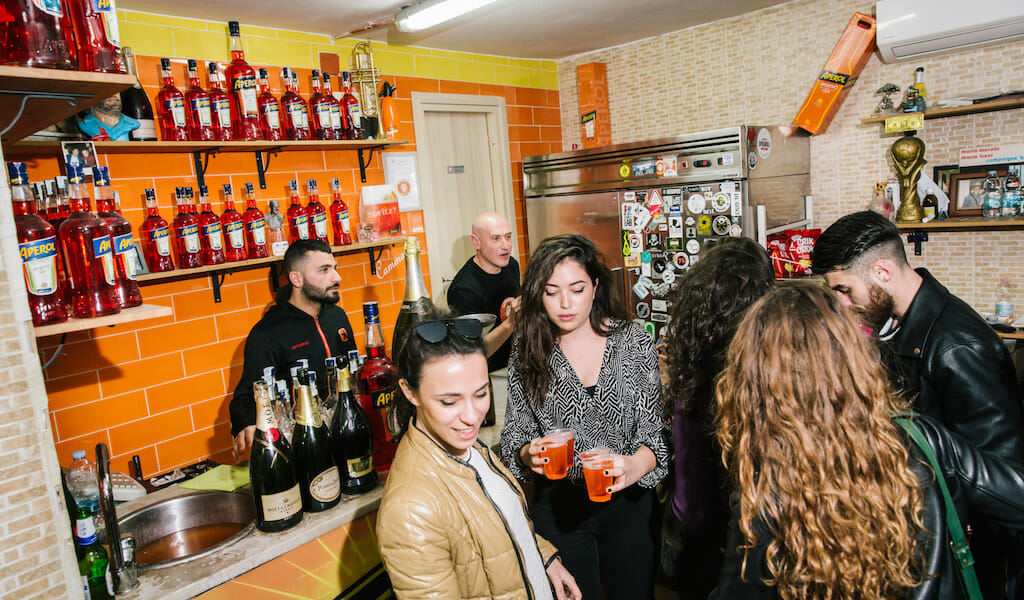 Southern Comfort: Naples Makes the Spritz Its Own

Naples | By Amedeo Colella
By Amedeo Colella
NaplesSold for one or two euros, the spritz, which at its most basic is a combination of bittersweet liqueur, sparkling wine and seltzer, has been dubbed “the champagne of the poor” – no wonder it has been the king of cocktails in Naples for at least a decade. Aperitif time – often starring a cool spritz…