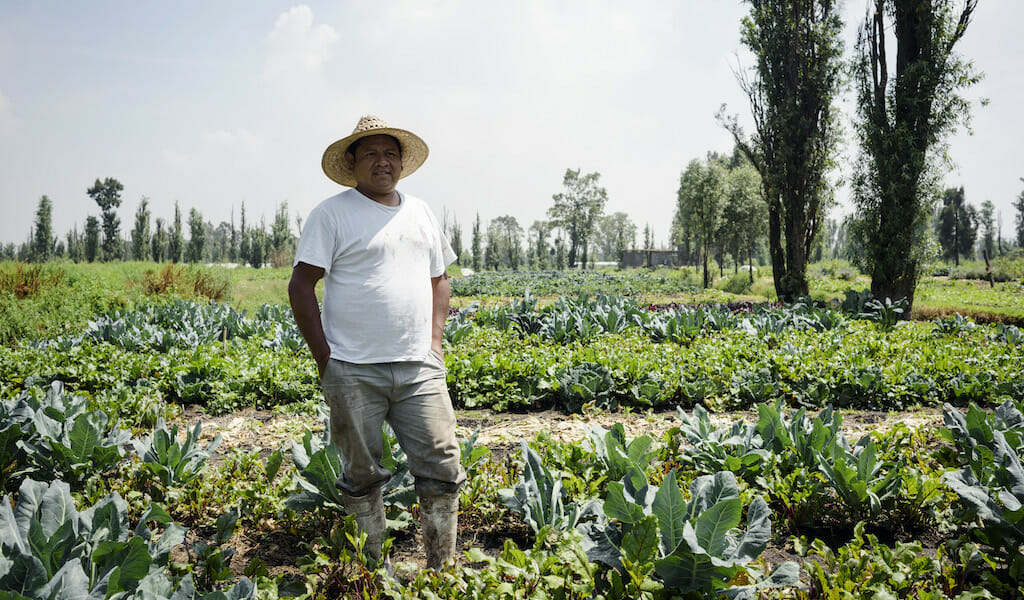 A few intrepid trajinera (gondola) operators sit along the Cuemanco Dock, waiting for tourists to take through the canals. We’re in Xochimilco, the southern-most borough of Mexico City. It’s a popular weekend destination for trajinera rides, when entire extended families float along the canals, drinking micheladas (beer prepared with lime and Worcestershire sauce) and eating elotes (grilled whole corn cobs) sold off canoes. But this weekday morning is quiet.

As the morning fog burns off, we set out on a green, motorized trajinera into Xochimilco’s Natural Protected Area. Before it was a preferred weekend getaway for chilangos, Xochimilco was the agricultural heart of the Aztec capital Tenochtitlan. Our destination is a chinampa, a man-made agricultural plot that “floats” on the city’s shallow lakebeds.

While many chinampas have been abandoned, Noé Coquis – our guide for the day – is leading us to see his family’s plot, one that’s still in use. He sells produce to Yolcan, a company founded in 2011 to connect consumers with fresh, organic produce from Xochimilco. Yolcan is one of a handful of initiatives that support chinamperos by connecting them to consumers in central Mexico City. (Another is De la Chinampa a Tu Mesa (From the Chinampa to Your Table), which partners with Culinary Backstreets to offer tours in Xochimilco.) 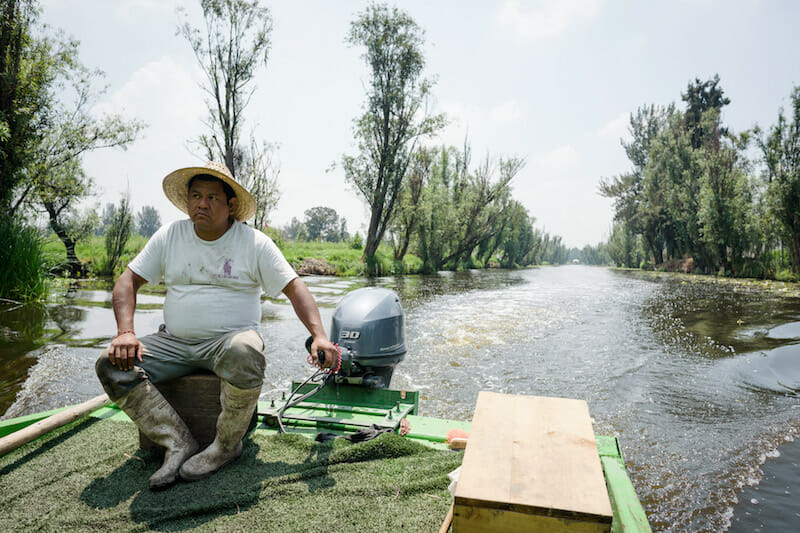 More than 22 million people live in greater Mexico City, and environmental concerns are endless: trash, water shortages, air pollution. Xochimilco is one of the last green patches in the massive urban area. Facing down the pressures of a megacity in the 21st century, these chinamperos are dedicated to keeping Xochimilco’s historic and world-renowned agricultural system afloat.

Tenochtitlan’s height was from the 1300s to the 1500s, when its rulers gradually dominated the small city-states that surrounded Lake Texcoco and came to control the Aztec empire. The chinampas, made by building up layers of mud from the lake bottom and other organic matter, were built to maximize the arable land for agricultural production. The food grown in Xochimilco was transported by a system of canals to reach the market at Tlaltelolco or, later, the massive La Merced public market.

When the Spaniards conquered Tenochtitlan, they began slowly drying out the lakebeds. Xochimilco is one of the last parts of Mexico City that retains its system of canals, over 50 miles of them, and was named a UNESCO World Heritage Site in 1987. But as Mexico City grew exponentially during the 20th century, its urban core overtook rural Xochimilco. Today, a Light Rail line links Xochimilco to the city’s Metro system, and it is packed with commuters, morning, noon and night. 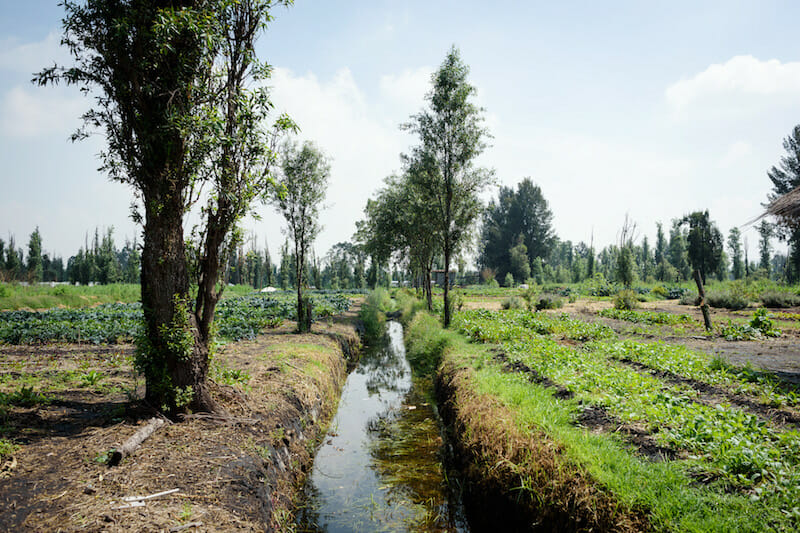 The growth of the city has put enormous pressure on the chinampas. It is one of the last affordable corners of Mexico City, and developers are rushing to sell land. Even in the Natural Protected Area, where most construction is prohibited, illegal land sales take place.

Encouraging younger generations to work in the chinampas is difficult. Wages are higher in Mexico City compared to rural Mexico, but chinamperos still receive low pay for long days of work. Going on to university, or working in the informal market, operating a bike-taxi for instance, can be more profitable than farming. That means many chinampas have been converted to soccer fields or simply abandoned.

Environmental challenges compound these pressures. The natural springs that once fed the canals have dried up, and residents and tourists frequently dump waste into the canals. The polluted water is impacting native plant and animal species, hundreds of which are at risk for extinction. Non-native species, such as carp and tilapia, have overtaken the waterways, putting Xochimilco’s most famous amphibian, the axolotl, a salamander with remarkable biological characteristics, at risk for extinction.

One solution for Xochimilco may be deceptively simple: bring back the farmers. Yolcan and De la Chinampa a Tu Mesa are pioneering distribution models in Mexico that have helped local agriculture thrive in other countries.

“Instead of focusing on the problem, we look at the progress that’s possible,” says Ricardo Rodríguez, the director of De la Chinampa. He began working in Xochimilco in 2008. 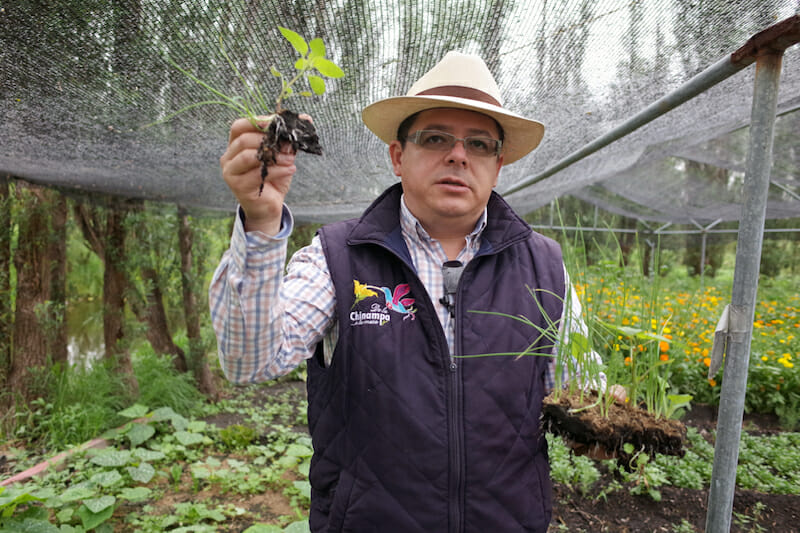 Rodríguez explains that the company began by connecting with chinamperos and developing networks of consumers interested in buying their produce. They also have worked with numerous chefs around the city. More recently, the company has expanded to give tours of the chinampas, where Rodríguez explains the history of Xochimilco to visitors and brings them to meet chinamperos.

“Each chinampero should be autonomous,” he says. “If the producer sees that there is interest, they will restore their land.”

His delivery service is focused in the western boroughs of Mexico City, home to higher-income households. Rodríguez says that transportation costs are significant, and that without scaling up significantly, it would be hard to bring down the delivery costs.

“Xochimilco is one of the only places where human interaction has actually improved the ecology.”

Yolcan was founded in 2011 by Lucio Usobiaga, who previously worked with Rodríguez. On our recent visit to Xochimilco, we spoke with his business partner, Antonio Murad.

“Xochimilco is one of the only places where human interaction has actually improved the ecology,” Murad says, as we ride in the trajinera to a chinampa. “The creation of the chinampas led to more species and biodiversity.”

Yolcan has encouraged chinamperos to introduce a variety of crops, instead of mono-cropping to meet the demands of the Central de Abastos. By working with top restaurants around Mexico City and connecting them to farmers in Xochimilco (even going so far as to invite chefs to cook in the chinampas), Yolcan aims to educate consumers about local vegetables like verdolaga that have fallen out of fashion. After starting in Xochimilco, Yolcan began sourcing from farmers in Huasca, Hidalgo and San Miguel Xicalco, in the Tlalpan borough of Mexico City. 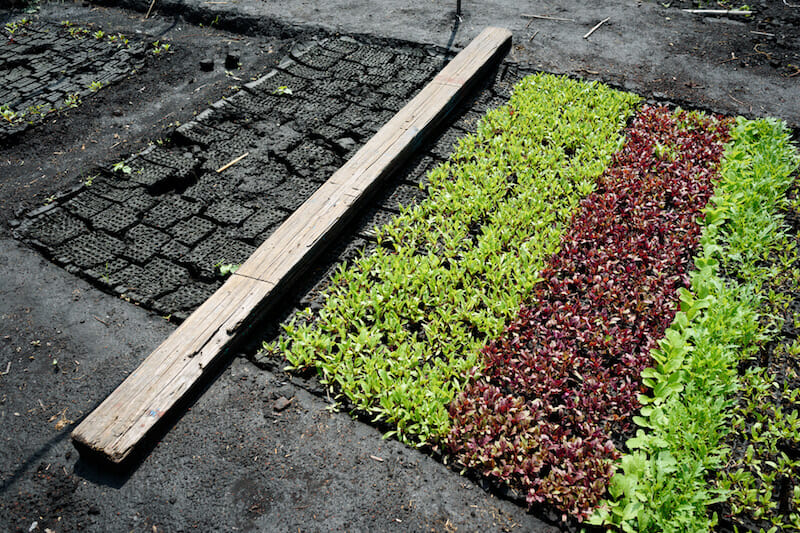 “Now we take the orders directly from the restaurants and the farmers plan around that,” says Murad. The returns are better, and farmers do not face the uncertainty of selling at the Central de Abastos, he says.

We arrive at the chinampa and climb off the trajinera. The ground feels solid below us, even though it is packed organic material floating on the lake. The chinampas vary in size, and this one is 2,000 square meters. The neat rows are filled with heads of lettuce, and other leafy, springtime vegetables.

We’re accompanied by Noé Coquis, who has worked with Yolcan in his family’s chinampas for years. Coquis, 37, says that he always felt a calling to be a chinampero, but that it was a rare choice.

“In my family, it’s just me, my father and one cousin who are still farming,” he says. “There aren’t many in my generation.”

Coquis took agro-ecology courses with Yolcan. While the company has bypassed organic certification, they monitor the practices of each farmer who sells into the network. While the bulk of their orders are still from restaurants, Murad estimates that about 40 percent come through its Community Supported Agriculture (CSA) program, which launched in 2014. Consumers “subscribe” a month at a time and receive a box of fresh vegetables every week. The CSA products change with the seasons; currently it includes kale, Swiss chard, carrots, heirloom tomatoes and onions. Early spring was heavy on root vegetables: turnips, and beets that survive the cooler months. 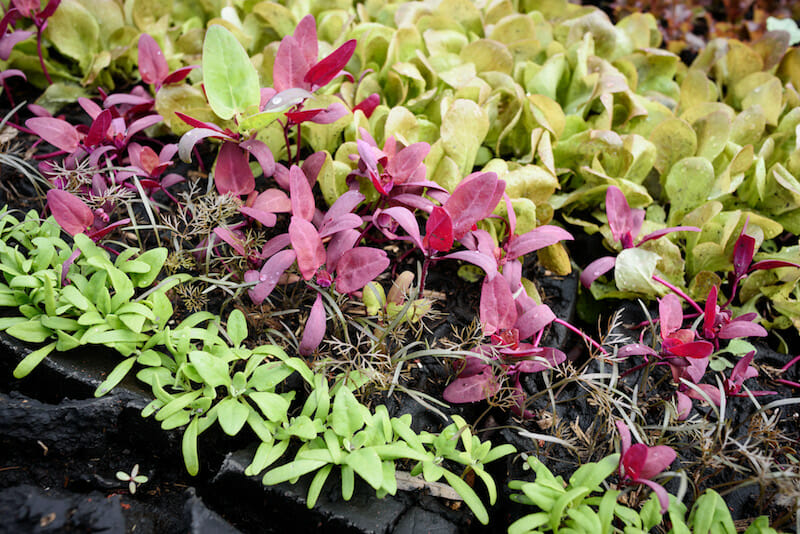 The CSA started with their friends and family. It is now open to the public, and they deliver 180 shares every week. The pick-up points are in middle-to-upper income neighborhoods like Roma Norte, Polanco and Escandon. Each kilo of produce costs 65 pesos, or $3.20. That’s cheap compared to CSA shares in the United States, but a significant premium compared to prices at Mexico City markets.

Murad says there are plenty of consumers willing to pay more for organic, locally-sourced produce, and that they work to keep the costs as low as possible. He says, “The price can’t go down more, because it wouldn’t be sustainable.”

Coquis says that with Yolcan he has a steadier income than before. Instead of farming being a thing of the past, he sees how new production models can sustain the chinampas into the 21st century. For the dozens of farmers working with Yolcan and De la Chinampa, local demand for organic agriculture will help them stay on the land. And with more chinamperos working in Xochimilco, pressure will surely increase to clean up the canals. Both organizations say that interest is growing, and 2018 will be their biggest year yet.

Sitting in the shade at the chinampa, surrounded by lettuce sprouts, Coquis wonders, “In the past Xochimilco was a formidable producer, why can’t we return to that?”

By
Martha Pskowski
, photos by
Yigal Schleifer and PJ Rountree 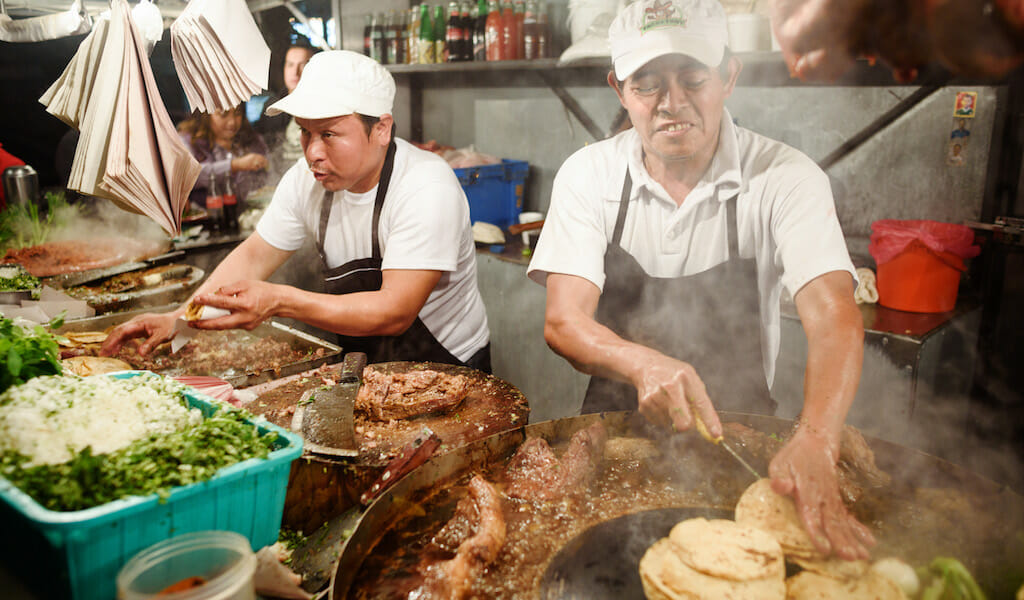 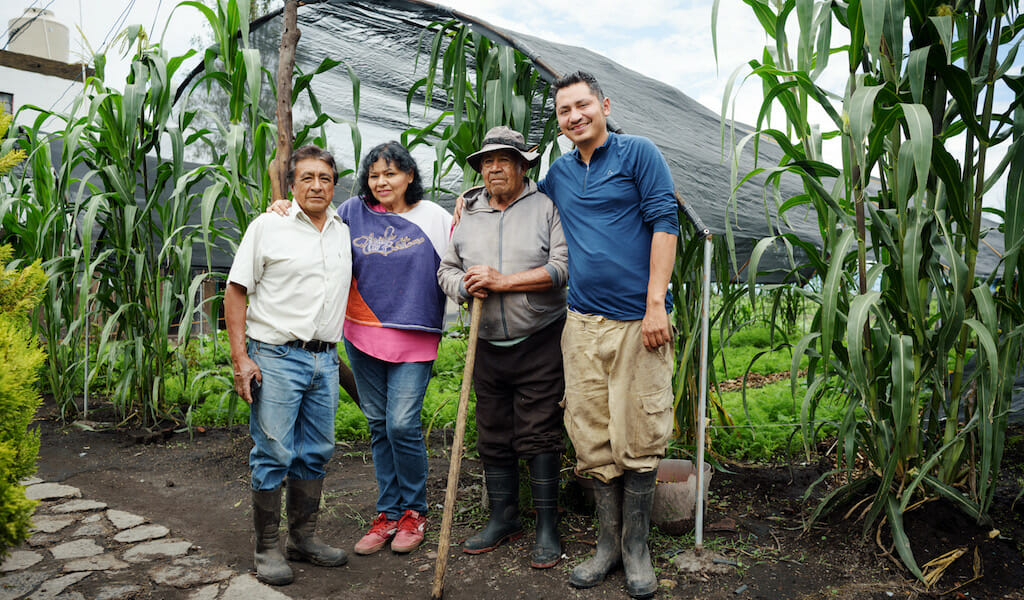 Mexico City | By Lydia Carey
By Lydia Carey
Mexico CityLike a lot of us, the Galicia family was looking forward to 2020. Farming along the city’s southern canals for generations, they are stewards of the chinampa agricultural system, one of the oldest on the planet. For the past eight years they have been slowly converting their man-made plot – built on top of the…