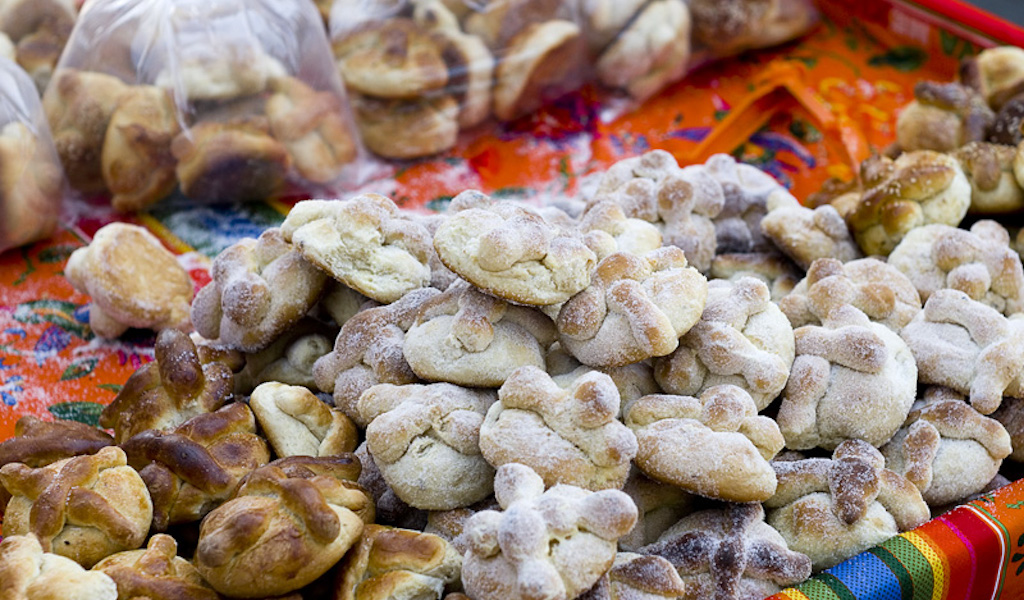 Día de los Muertos (Day of the Dead), or at least some variation of it, has been an annual celebration in Mexico for over 3,000 years. During the Aztec period, it took the form of a festival in August dedicated to Mictecacihuatl, otherwise known as the Lady of the Dead, who was the ruler of the underworld and the afterlife with her husband, Mictlantecuhtli. Today it is one of Mexico’s most colorful holidays, encompassing popular traditions both old and new.

To the Aztecs, death was nothing to be feared; it was but a passage and a continuation to the next level of consciousness. Life was viewed as a state of dreaming, and death was when someone was truly awakened from their slumber. The Aztecs’ monthlong festival was meant to honor those who had passed on and to entice their souls to visit once more. Even the skulls of the dead were kept by the Aztecs as special trophies that symbolized the passage from life to the rebirth of death.

When the Spanish arrived, they were horrified by these practices. Being accustomed to the belief that death was the end of life, they associated death with a weight and fear that the Aztecs did not share. In their conquest of Mexico, the Spanish sought to eradicate most elements of Aztec culture. Though they had some success, they could not completely wipe out local beliefs. Death refused to die and, subtly admitting defeat, the Spanish compromised instead. In an attempt to make the native Mexicans more Christian, the festival was moved to November 1 and 2 to coincide with Catholicism’s All Saints’ Day and All Souls’ Day. 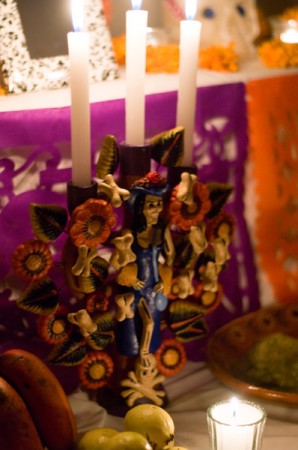 Today, although the modern Day of the Dead celebration is a mix of ancient tradition and more modern cultural tweaks, the two-day celebration still revolves around the Aztec principle of honoring the dead. Celebrations vary widely from town to town and even from neighborhood to neighborhood, but some general aspects are widespread.

Ofrendas, or offerings, are the basis of the festivities. In the family home, a table is set with colorful decorations, the dead relative’s favorite foods and belongings, incense, Mexican marigolds (thought to attract the souls of those who have passed on) and pan de muerto, or “bread of the dead.”

Cities and towns also have celebrations; in Mexico City neighborhoods such as Coyoacán, large ofrendas are constructed. Marigold flowers and colored sand are used to create stunning floral art patterns on walkways. Calaveras (skulls) are attached to papier-mâché skeletons, which are dressed up and set in amusing, whimsical poses representing moments from life. Here a skeletal mariachi band sings and dances in eternal silence, there a bony wedding party celebrates the nuptials of grinning kin. Large crowds gather to view the macabre scene, snacking on ice cream and esquites (corn kernels mixed with mayonnaise, chili powder and lime juice), laughing and pointing in delight.

A few culinary elements of Day of the Dead are fairly universal. One of the most popular treats, pan de muerto, is a round, sweet bread baked with shapes on its surface that vaguely resemble bones. The bone-like forms are meant to symbolize those lost in death, while the round shape of the bread represents the circle of life. Just as fruitcake tends to show up in the U.S. and U.K. only around Christmas, pan de muerto is generally eaten only in the weeks leading up to Day of the Dead and is not made at any other time of the year. Unlike fruit cake, however, pan de muerto is perishable and is best eaten fresh and with a steaming cup of thick Mexican hot chocolate. The bread is available in nearly every supermarket, neighborhood market and panadería (bakery) during October and early November – an unfortunately short period to enjoy this delicious treat. 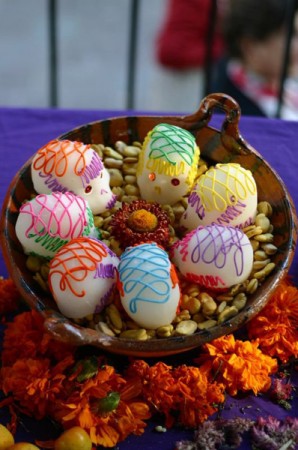 Calaveras de azúcar are another favorite food item. These edible sugar or hollow chocolate skulls are the far more festive descendants of the Aztecs’ trophy skulls. Used both in decorating ofrendas to the dead and as tasty treats for the living, calaveras show up in early October in huge quantities. Stacks of the brown and white skulls line market pathways, the faint smell of sugar and chocolate drifting through the air, enticing shoppers to stop and pick some up. The small skulls, about the size of a robin’s egg, are often eaten. The large ones, which can be the size of a real human skull, are formed with sugar and decorated with colorful icing, glitter and paper. Although the sugar part is edible, they are rarely eaten as they are seen more as decorative works of art than food.

Aside from these goodies, food and beverages consumed during Day of the Dead vary greatly based on location and the preferences of those who have passed on. At home in large Mexican cities, a good tequila is a common drink to share with family around the ofrenda. In small towns, particularly in the state of Michoacán, corn-based flavored drinks called atoles are common.

At first glance, Day of the Dead may seem to be about death and sadness, but instead it is truly about life and living, about celebrating the lives of those who have moved on and holding those memories close to our hearts. It is about gathering with family and friends, feasting on chocolate, bread and tequila, and realizing what the Aztecs already knew: Death is a step we all must take, but it is just a step and not the end. For as long as we remember and celebrate life, our loved ones will live on. They will always be invited to the table.

Editor’s Note: As Day of the Dead is just around the corner, we thought it was worthwhile to rerun this feature from 2014. 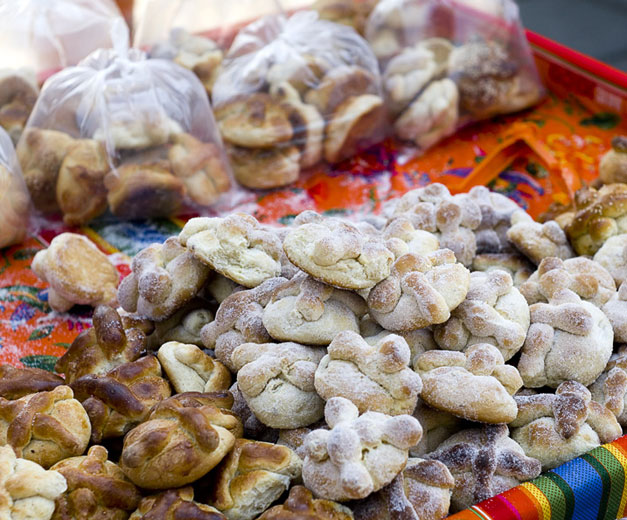 Mexico City | By Ben Herrera
By Ben Herrera
Mexico City Día de los Muertos (Day of the Dead), or at least some variation of it, has been an annual celebration in Mexico for over 3,000 years. During the Aztec period, it took the form of a festival in August dedicated to Mictecacihuatl, otherwise known as the Lady of the Dead, who was the… 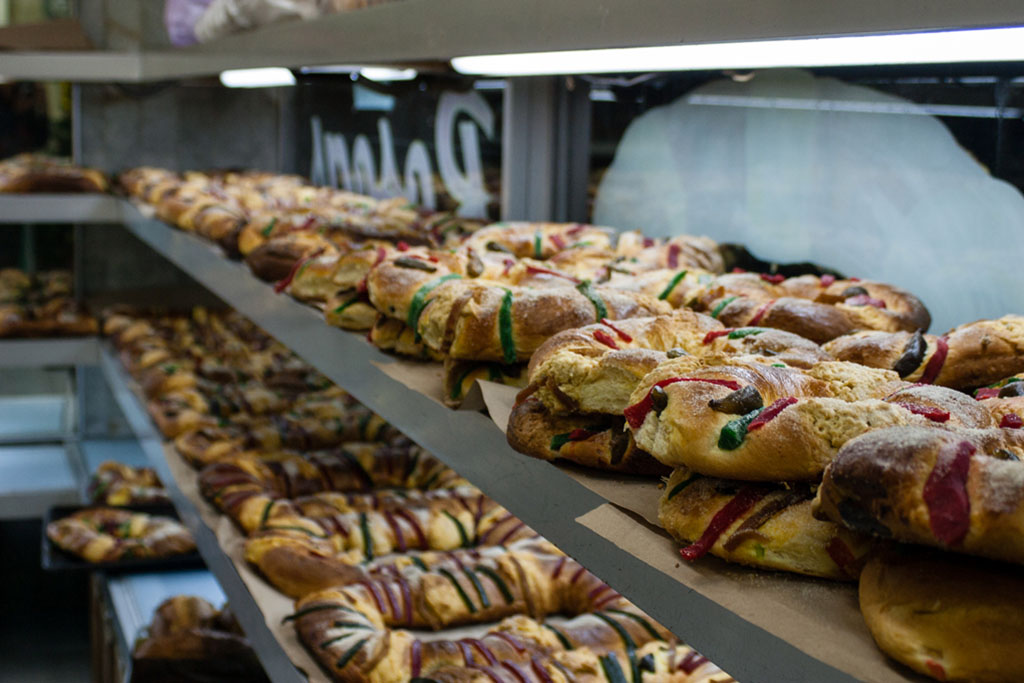 Mexico City | By Ben Herrera
By Ben Herrera
Mexico City Editor’s note: Unsurprisingly, Mexico and Spain have a number of customs in common, especially during the winter holidays. This is the first installment of a two-part special on a sweet tradition that’s shared by the two countries, and the second will appear tomorrow. In Mexico, Epiphany (or Día de Reyes, in commemoration of…

Mexico City | By Ben Herrera
By Ben Herrera
Mexico City Editor’s note: Mexico and Spain unsurprisingly have a number of customs in common, especially during the winter holidays. This is the first installment of a two-part special on a sweet tradition that’s shared by the two countries, and the second will appear tomorrow. In Mexico, Epiphany (or Día de Reyes, in commemoration of…