Near Mexico City, the Far Out Tastes of Tepoztlán | Culinary Backstreets 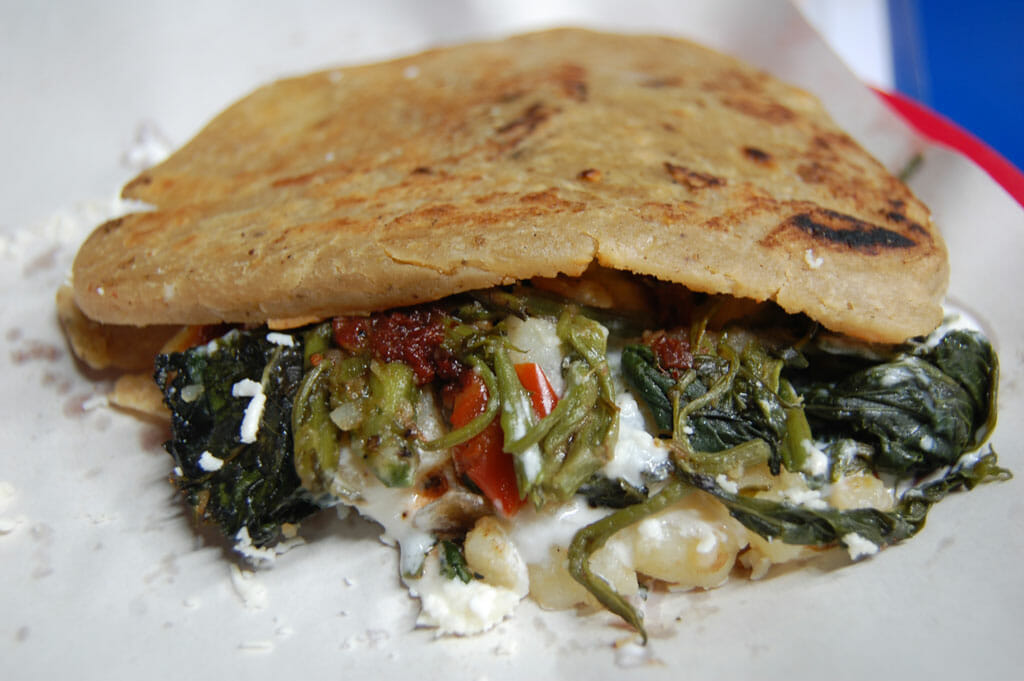 Market Watch: Near Mexico City, the Far Out Tastes of Tepoztlán

No matter how long your stay in Mexico City, you’ll simply never “taste it all.” In the cycle of each day, from tamales, atole and morning licuados to midday comida and evening tacos, this great culinary city is in perpetual motion. Want Yucatecan cuisine? Oaxacan? Restaurants abound where you can experience the cuisines of other regions, but the street food, fondas and market stalls in general reflect the regional cuisine of Estado de México. To properly understand “Mexican food” and its regional diversity, get out of town.

Just a little more than two hours from Mexico City’s Centro Historico is a Pueblo Mágico called Tepoztlán. The bus ride there passes through three national parks along the way. Morelos, despite being one of the smallest states in Mexico, has diverse terroirs and a perfect year-round climate for agriculture. Subtropical lowland rainforest in the south to alpine meadow at its northern edge yield an abundant array of produce. The milpa tradition is strong here, too. From May to October, the rainy season brings not just this milpa harvest of corn, squash and beans, but wild mushrooms. These beloved setas take the place of the common cultivated champinones (button mushroom) in almost every puesto de comida (stall serving meals and snacks).

This little town of Tepoztlán is a New Age mecca – attributed to the healing energy of the quartz content in the mountains. From tarot card readers to massages and temascales (sweat lodges), there’s no shortage of curative, restorative and contemplative ways to get your aura in order. Being so close to Mexico City, from Friday afternoon through each weekend, the streets around the plaza are lined with vendors and the town buzzes with tourists. Better to come, instead, on Wednesday for the weekly tianguis – this open-air market brings locals with their harvests and gleanings to the plaza adjacent to the tarp-roofed market. A recent trip yielded some fascinating discoveries: exotic guayaba pomerosa (rose apple), golden-yellow and sweet – rather than tart – tomatillos and an herb that looked a bit like tiny lily pads and tasted much like cilantro.

This was an important pre-Columbian settlement; the ancient Ometochtli temple, El Tepozteco, sits on a mountain ledge above the town. A hike up to it is ideal for working up an appetite; keep that in mind as you enter the market. 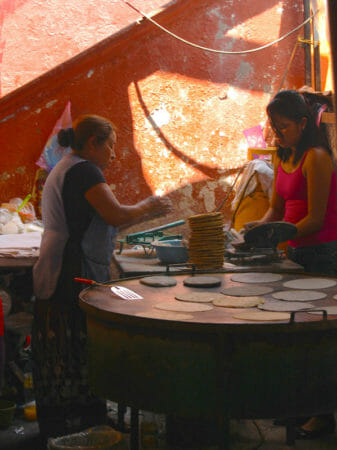 From morning until the market day starts to wind down around 4 p.m., women press, slap and form masa into tortillas by hand at large comals (griddles) stationed throughout the market. Stews (guisados) of local vegetables and meats bubble in cazuelas, or earthenware pots; pancita, a local version of tripe soup, and barbacoa (goat or lamb wrapped in leaves of agave and slow roasted) and the pre-Hispanic protein-rich chapulines (grasshoppers) fuel the omnivore.

Prehispanic foods are the local heritage, and a few puestos specializing in these foods give vegan and vegetarian visitors plenty to graze on. Indigenous greens such as alaches and quelites and, in season, flowers of the yucca (flor de izote) and agave (flor de maguey) and the regional specialty, the red-budded flor de colorín, are cooked in guisados or formed into vegan-friendly (and gluten-free) tortitas (fritters). If you’re expecting local mercado prices, sit yourself down elsewhere – the price of a pre-Hispanic comida reflects, most likely, the popularity of vegan/vegetarian and foodie tourism here.

At most other puestos, in stacks reminiscent of the steep mountains of the Tepozteco, triangular itacates stand at the ready. These will be split open and filled with any combination of the guisados on offer and toasted on the griddle. Manteca (lard) and queso rallado (grated cheese) are added to the dough.

A specialty of nearby Cuernavaca, taco acorazado – “battleship” taco – will satisfy you until, well, the next thing. Two extra-large tortillas are stacked together, topped by red rice, a “main” such as chile relleno, milanesa de res or chicken and usually a few slices of avocado.

Of particular note is the vendor Antojitos Mayre, which had the best picadillo-stuffed chilies with big fat raisins and nuts. Topped with their sweet-tart jamaica salsa… pure umami.

Made famous in nearby Yecapixtla, cecina is long strips of lean beef, cut against the grain and marinated in salt, or sometimes enchilada (chili salt). These thinly sliced strips in various stages of the process are draped across rods, and, once ready to cook, folded into stacks. At the puestos, order a sope (an oval “plate” of masa) topped with beans, cecina seared asado and finished with cream and avocado. 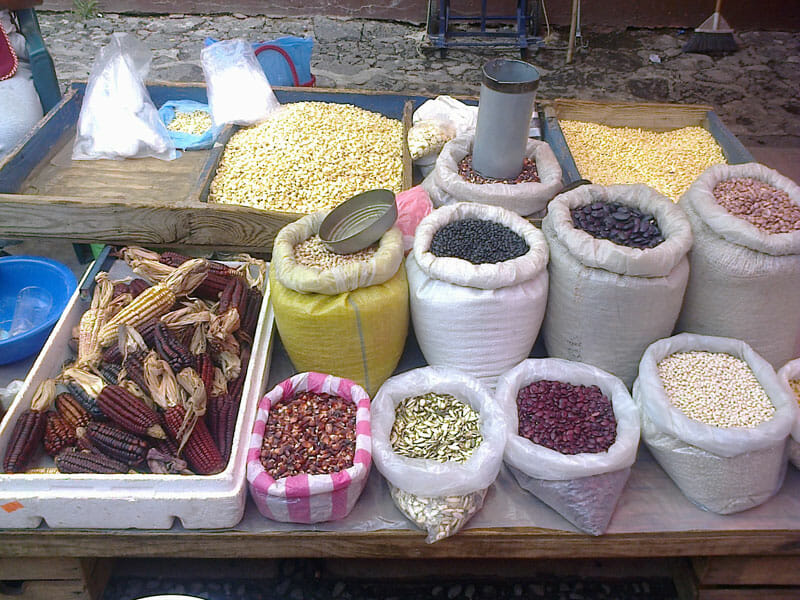 Masa in this region is prepared as oval sopes (in other parts of Mexico, these are typically round), sandal-shaped huaraches and fat, elongated football-shaped tlacoyos filled with a layer of mashed habas (favas), frijoles (refried beans), requesón (soft cheese) or chales (crispy pork cracklings). Each gets topped by your choice of guisado. You won’t be the first to ask: why so many shapes when it’s all masa? But truly, texture is everything – try them all just for the sake of experiment. (Note: tlacoyo dough contains lard.)

To top it off, most vendors offer a staggering selection of salsas. Besides the usual chili salsas, fruits like guayaba, mango and pineapple combine sweet with heat. We saw peanut- and sesame-based salsas and even spotted a few vendors offering Coca-Cola salsa.

Outside the market, local specialties are pulque –the sap of the maguey mixed with fruit juices and fermented, and, well, it’s almost impossible to leave Tepoztlán without trying the ice cream– there’s a “Tepoznieves” on almost every corner offering a dizzying number of flavors, among them nopal and avocado. A “magical town” indeed. 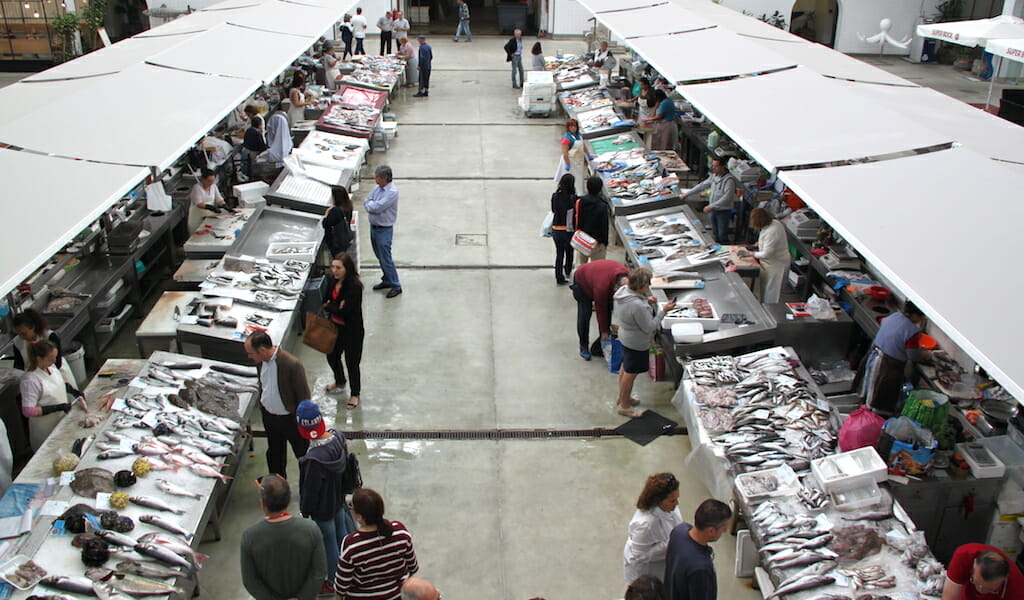