As we mentioned in our piece about Rosca de Reyes, February 2 is an important date in the Mexican calendar – for Candlemas and, relatedly, for tamales. True, tamales are one of the most popular foods in Mexico City, and we can find all kinds of reasons for eating them any day of the week. But this day commemorates a ritual visit Mary made to the temple in Jerusalem with the baby Jesus. In the Catholic Church and Orthodox traditions, February 2 is the Feast of the Presentation of the Lord, and at one time, the candles used in services in church throughout the year would be blessed that day, hence the name Candlemas or Candelaria. Native Mexicans would celebrate the planting this time of year with a big feast that would include tamales, and the indigenous and Christian traditions became linked.

In Mexico, as we recounted previously, people gather on January 6 to eat “kings’ cake.” Expectations run high when cutting the Rosca. According to tradition, whoever finds the baby figurine in his or her piece of cake is obliged to make tamales on Candlemas.

Tamales take a lot of time and effort to make from scratch, and in a bustling metropolis like Mexico City, time is often in short supply. For that reason many people buy their tamales already prepared from any number of vendors who sell them on the street or in restaurants. 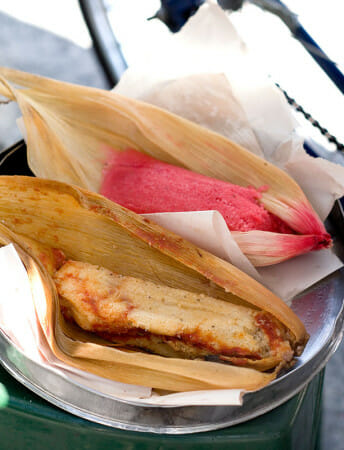 The tamal is a pre-Hispanic dish – they’ve been around for about 10,000 years, even longer than corn tortillas – that was not only feasting food but also served as portable sustenance for armies, hunters and travelers. This patty of nixtamalized corn (hominy) seems infinitely variable. It can be filled with pork, chicken, green or red salsa, nuts, fruit or shrimp, among other ingredients, and can be wrapped in corn husks, avocado or banana leaves, though some cooks may use tree leaves, bark, paper or fabric. The Spaniards, once they arrived, contributed lard, which gives the modern tamal its fluffy, soft texture.

Every region in Mexico has its own version. In Michoacán, tamales are called corundas and are wrapped in corn leaves. Those from the coast are wrapped in banana leaves from the coast, while the zacahuil from the Huasteca region is an especially large tamal, sometimes as long as 10 meters and weighing several kilos, that is cooked inside a clay pot and whose fillings might include pork, beef, shrimp and whole chickens.

Mexico City, of course, sees an enormous variety of tamales. In addition to the tamal stand on the corner of García Icazbalceta and Altamirano in Colonia San Rafael, here are a few of our favorite places to find them.

Vendors sell banana-leaf tamales at the corner of Vicente Guerrero and 16 de Septiembre right outside the market. Walking west on Vicente Guerrero, just a couple of doors down, you’ll also find a man who sells delicious tamales de dedo – so called for their “finger” shape.

Known as a tamal chino, or “Chinese tamal,” the unusual specimen at this establishment, which specializes in the cuisine of Veracruz, is made of rice and is worth seeking out.

Around this time of the year Restaurante Nicos prepares a wide variety of corn-husk tamales. Like everything else on its menu, all the varieties are worth trying.

This feature was originally published on January 31, 2014.