Mexican cooking is clever. With just a handful of ingredients, each region of the country has managed to create a unique cuisine that reflects local lifestyles and traditions. This fact is made abundantly and deliciously clear at Con Sabor a Tixtla, a small, family-owned restaurant in Mexico City’s hip, vibrant Roma neighborhood.

Located on a quiet street not far from Mercado Medellín, the restaurant specializes in food from Guerrero, a southwestern state – home to the famous resort town of Acapulco – known for its seafood and its green pozole, a meat and hominy stew that is one of Mexico’s most iconic dishes.

We first discovered Con Sabor a Tixtla while on a taco tour given by a friend. The restaurant’s décor – brightly colored walls, floral streamers and traditional Mexican folk art – makes an immediate first impression even before the food comes out and gives the place a very welcoming feel, as if diners have just arrived for a party in someone’s living room. The intimate, familial atmosphere also comes through in the menu, where a short biography of the restaurant’s founder, Enedina Bello González, explains how she and her sons Alfredo and Juan Patricio not only manage the restaurant but also serve as its chefs.

In her desire to share traditional Guerrero dishes with a wider audience, Enedina makes the three-hour trip from Mexico City to Tixtla in her home state every week without fail, bringing back all the ingredients she uses in her dishes. Mexico City may have amazing markets stocked with diverse ingredients, but Enedina still prefers to locally source everything she makes. The food at Con Sabor a Tixtla (“With the Flavor of Tixtla”) clearly benefits from her dedication.

Given the small size of the place and limited staff, the menu is larger than one would expect. On our first visit, we tried a chile relleno (stuffed pepper) taco and a mole verde taco. Although these dishes can also be found in other parts of the country, Enedina makes them in the traditional Guerrero style, which frequently uses fruit in savory dishes to create sweet notes that work in harmony with the spicier ones.

The restaurant’s very tasty chile relleno taco, for example, was made not with the traditional poblano pepper but with the smaller but spicier chile cuaresmeño and was stuffed with a filling made out of pork, plantain, pineapple and raisin (we even thought we detected a hint of apple in the mix). In true Guerrero style, it was sweet, savory and spicy all at the same time.

But the real winner for us was the mole verde taco. True to its name, the taco’s spicy and aromatic mole was made using a jumble of herbs and other green ingredients, among them avocado leaves and pumpkin seeds (pepitas). It’s a dish that gave new meaning to the term “garden fresh” and really solidified our desire to come back to the restaurant to see what else Guerrero had to offer. 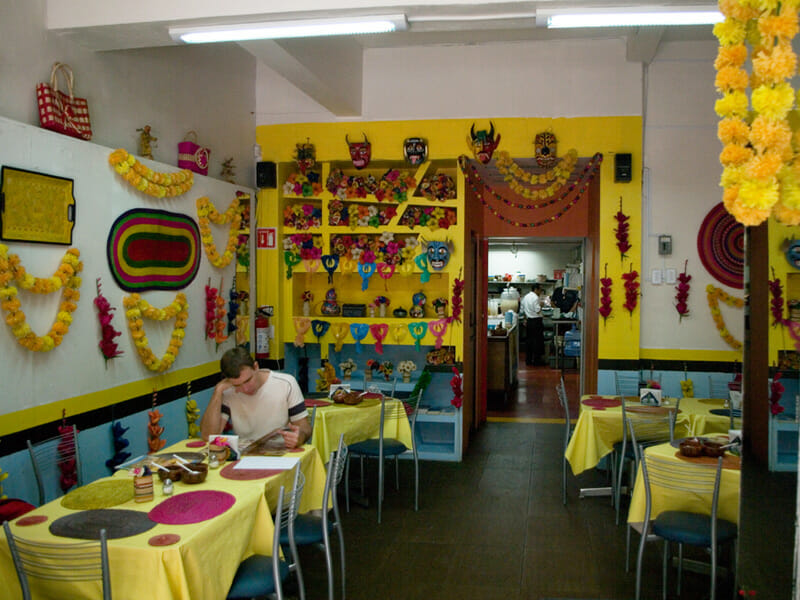 Returning later with a larger group of friends, we were able to try more of the dishes. We loved the sweet and savory flavor combination of the pollo enchipotlado, chicken cooked in chipotle pepper sauce with raisins, plantains and pineapple. We were also particularly impressed by the fiambre, an item unique to Guerrero: beef, chicken, chorizo and pork served over a bed of lettuce and drizzled with a sweet-and-sour sauce, resulting in something that seemed to owe as much to Chinese cooking as to Mexican. Other standouts included the barbacoa de pollo, a chicken slathered in a reddish, chipotle-based adobo sauce and steamed until it had achieved a melt-in-your-mouth texture, and the enchiladas de mole, corn tortillas wrapped around chicken and covered in a complex, fruity sauce whose color hovered somewhere between red and black. Even the beverages stood out. While typical drinks such as horchata are available, we recommend the chilate, a drink made with cacao, cinnamon and piloncillo (similar to molasses) that tastes a bit like chocolate milk.

For all the wonderful main dishes, what may be the best thing on the menu is actually a dessert. Called a torreja, it’s the Guerrero version of French toast, consisting of a piece of sweet, homemade bread covered in egg batter and fried, then bathed in a syrup of piloncillo and cinnamon (and sometimes topped with raisins or almonds).

At the meal’s end, with our spoons fighting over who would get the last drop of syrup at the bottom of the bowl that held the torreja, we silently thanked Enedina for so lovingly bringing the flavors of Guerrero to Mexico City. In fact, with its amazing home-style dishes, fresh ingredients and great service, this humble, off-the-beaten-path restaurant is now firmly on the list of our favorite places to eat in town.

This review was originally published on October 16, 2012.