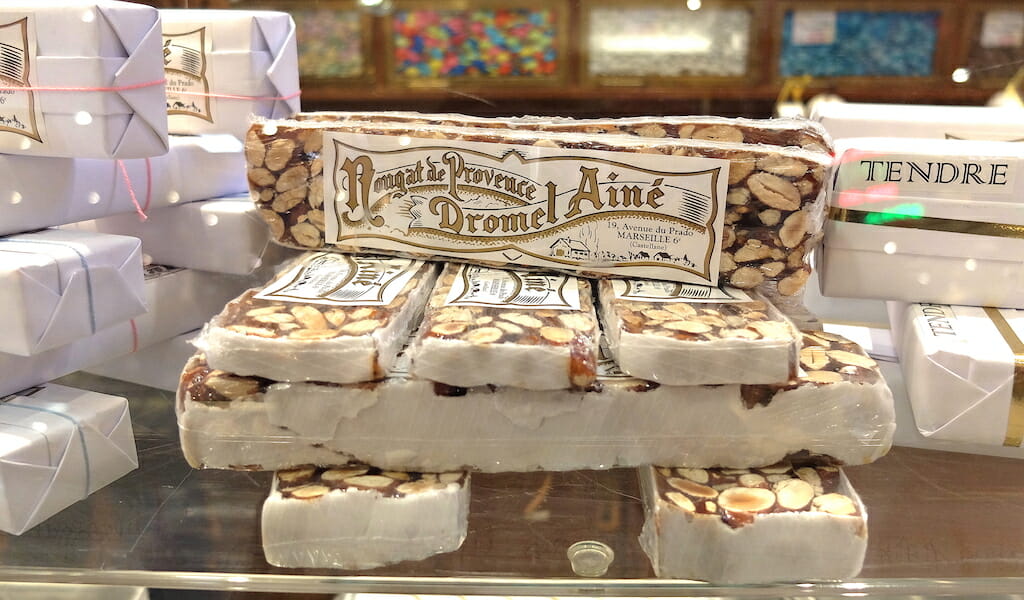 Holiday traditions tend to be tied to numbers. In southern Italy there is the Feast of Seven Fishes on Christmas Eve, while in Poland, the night before Christmas is celebrated with borscht, herring and poppy seed cake at the 12-course Wigilia. Here in Provence, our lucky number is 13, with the Treize Desserts de Noël.

By no means a static tradition, the 13 Desserts of Christmas have evolved over the centuries. Its first mention in 1683 by Marseille cleric Francois Marchetti in Explication des Usages et Coutumes des Marseillais (An Explication of Customs and Traditions of the Marseillais) detailed 13 breads, not desserts, alongside cakes and dried and fresh fruit. The table was topped with three tablecloths to represent the Holy Trinity – a custom that some families still practice today.

The sweet spread, also called calenos (for calendó, the Provençal word for Christmas), gained popularity in the 19th century thanks to the Félibrige, a group of writers committed to preserving the Provençal language and culture. In fact, it was one of these scribes, Joseph Fallen, who made 13 – the number of Jesus and his 12 apostles at the Last Supper – official.

In 1925, he wrote in a local paper: “Here is the quantity of sweets and treats for thirteen desserts. There must be thirteen, yes thirteen, not more if you want, but not one less.” Shortly thereafter, the Musée du Terroir Marseille featured a table laden with treize desserts at its Christmas expo.

While the number of desserts is fixed, the composition is more flexible. There essentially are four food groups – nuts, bread, confections and fruit – with limitless variations on each one. Which means one family serves mandarins, their neighbor has candied clementines, and their friends dine on chocolate-covered orange rinds. All have their place at the table.

From the absolutes to the as-you-wish, below is a list of the 13 Desserts, and where to find them in Marseille. 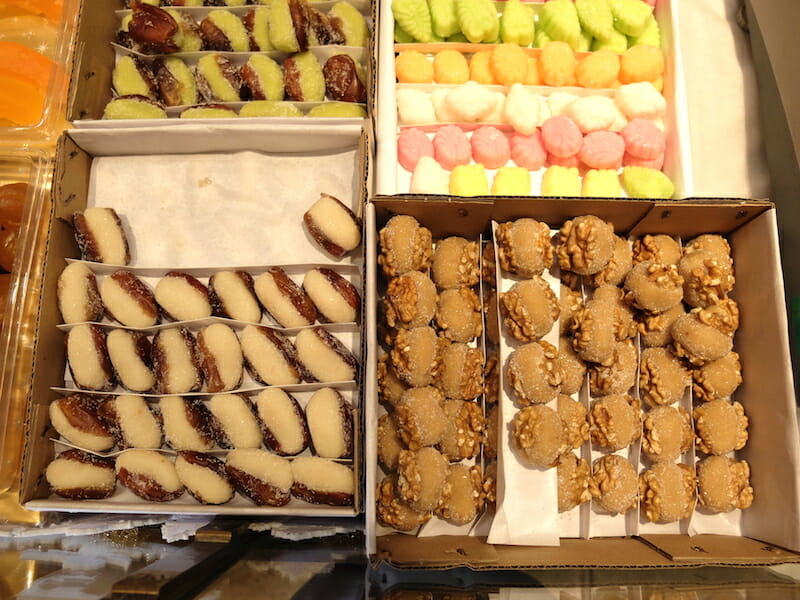 Dried fruit and nuts are as essential to a Provençal Christmas as a decorated pine tree. These mendiants represent the robes worn by the monks in four mendicant orders, the itinerant Christians who were bound by a vow of poverty and preached to the poor. Walnuts and hazelnuts symbolize the Augustinians, almonds for the Carmelites, dried figs for the Franciscans and raisins for the Dominicans. In addition to this foursome, dates are put on the table to remind us that Christ came from the Middle East.

Just before Christmas, you can find pre-made platters of the mendiants at shops. Most make their own – we like to stock ours from Saladin Épices du Monde. Since the holidays are all about splurging, some families prefer their fruit and nuts enrobed in chocolate. We are partial to two artisanal chocolatiers: the charming mendiant circles from La Baleine à Cabosse and the chunky mendiant tablettes from La Chocolatière de Marseille. Another decadent option is fruits déguisés, dates or figs stuffed with colored almond paste and studded with walnuts. 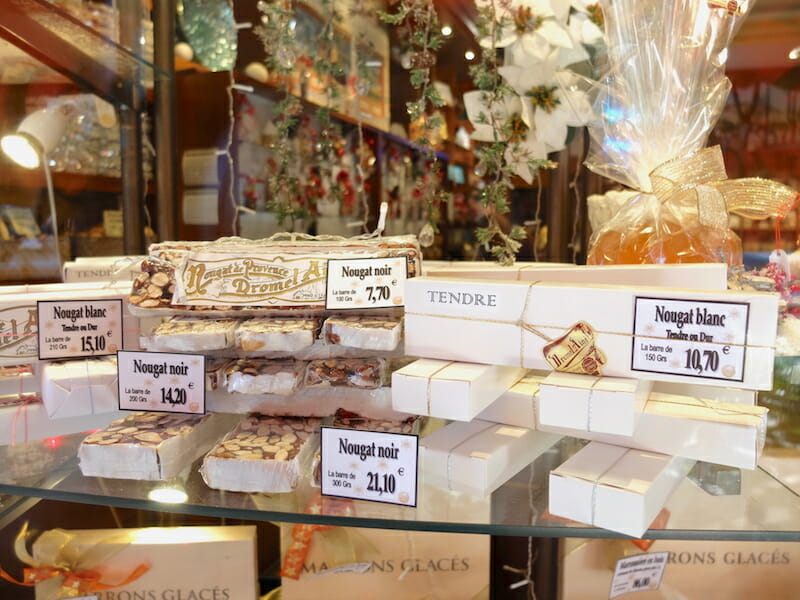 In nougat noir, sugar and honey are blended together into a dark caramel bar while the blanc is whipped with egg whites. Traditionally, the rectangular bars are studded with almonds, though you can find versions with hazelnuts, pistachios and dried fruit sprinkled in. The more filling there is, the more expensive the bar.

During the Christmas season, nougat is sold at holiday markets and shops. We like to go to Dromel Ainé, an old-school confiserie (candy shop) that has been around since 1760. Dressed in yellow coats like pharmacists, the staff dole out sweet prescriptions from behind the wooden counters. The manager, Philip, explains how nougat blanc used to be sold hard since customers like it to melt in their mouth. Now, though, some opt for bars that have a softer, marshmallow-like consistency. Their nougat is made by a fifth-generation confectioner, who lovingly hand wraps each bar in wax paper and packaging. 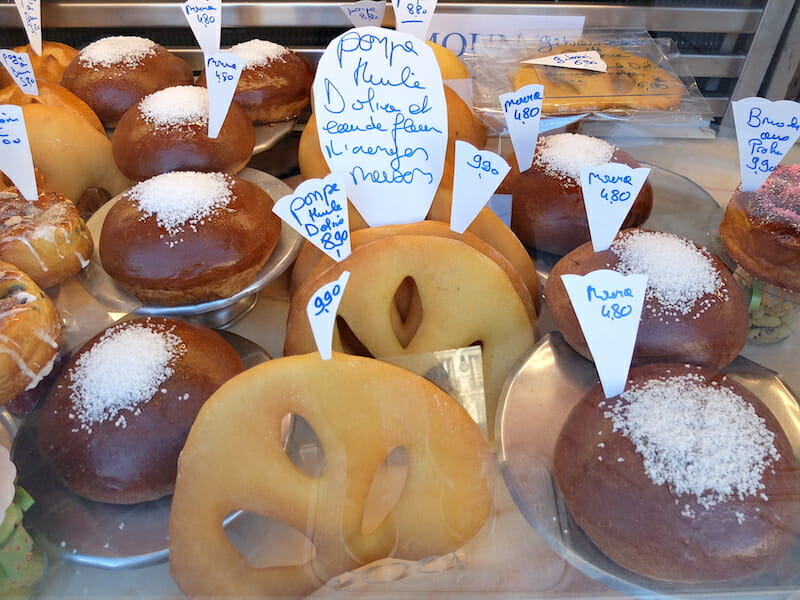 No meal in France is complete without bread, so it’s fitting that pain is vital to the 13 Desserts. The pompe à l’huile is an olive-oil brioche flavored with fleur d’oranger (orange blossom water). The tender bread is baked in two shapes: round with a star-pattern or oval with indentations that resemble a leaf. An integral part of Christmas, the pompe even appears in the traditional Provençal crèche as one of the gifts that the santon (nativity scene figure) Pistachier brings to the Three Kings.

When eating, it is customary to tear the bread in the spirit of sharing like Christ did at the Last Supper. On Christmas Eve, we dunk it in vin chaud (mulled wine) while it’s delicious Christmas morning when dipped in coffee or chocolat chaud.

Sylvie, the co-owner of Patisserie Plauchut, explains that pompe à l’huile was born from the leftovers in local olive oil mills after a pressing. Her husband bakes one of our favorites (it’s the most substantial one we’ve found in town). We’re also fans of the smaller, organic pompes at Pain Salvator. Both boulangeries bake the Provençal bread year-round, while others have it only during the holidays. 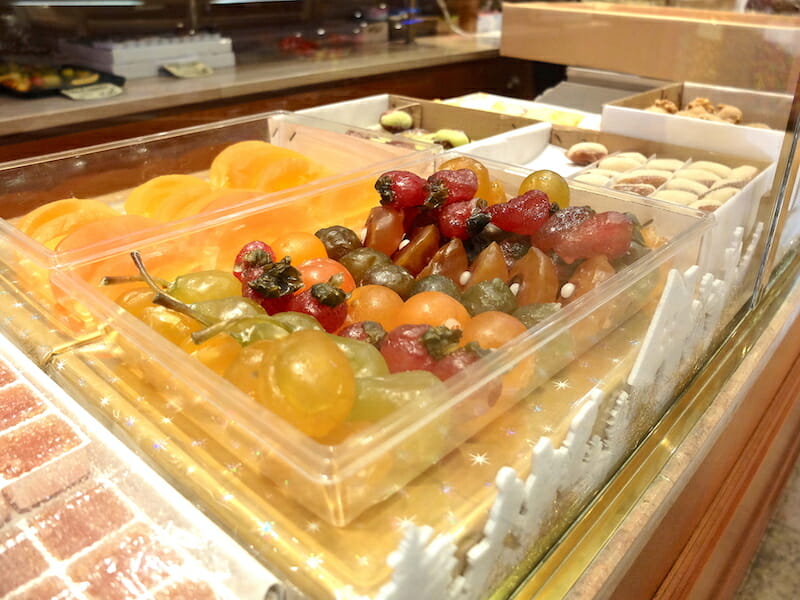 While fruit plays a prominent role in the 13 Desserts, each Provençal family opts for their own interpretation. For fresh fruit, some like oranges and clementines plucked from the nearby Côte d’Azur or Corsica in honor of Marseille’s large Corsican community. One of our loved ones always serves a giant platter of fruit – pears, apples and citrus plus harder-to-find offerings like pineapple and kiwi for a festive touch.

The shop sells most of the fixings for the 13 Desserts, hence the line out the door in December. For one-stop shopping, locals also like Patisserie Plauchut, one of the last Marseille addresses to make everything in house, a rarity in this age of specialization. Both shops also sell navettes (boat-shaped fleur d’oranger biscuits) and croquants aux amandes (French biscotti). The two Marseille delicacies have nudged their way into this Christmas tradition. As has chocolate, inevitably, since it’s such a popular holiday and hostess gift.

The 13 Desserts are first put out on Christmas Eve, after the customary light dinner (often giant seafood platters in Marseille) before the increasingly less attended midnight mass. They remain until December 27, the gift that keeps on giving, whether you’re hankering for a handful of almonds or a syrupy-sweet candied apricot. 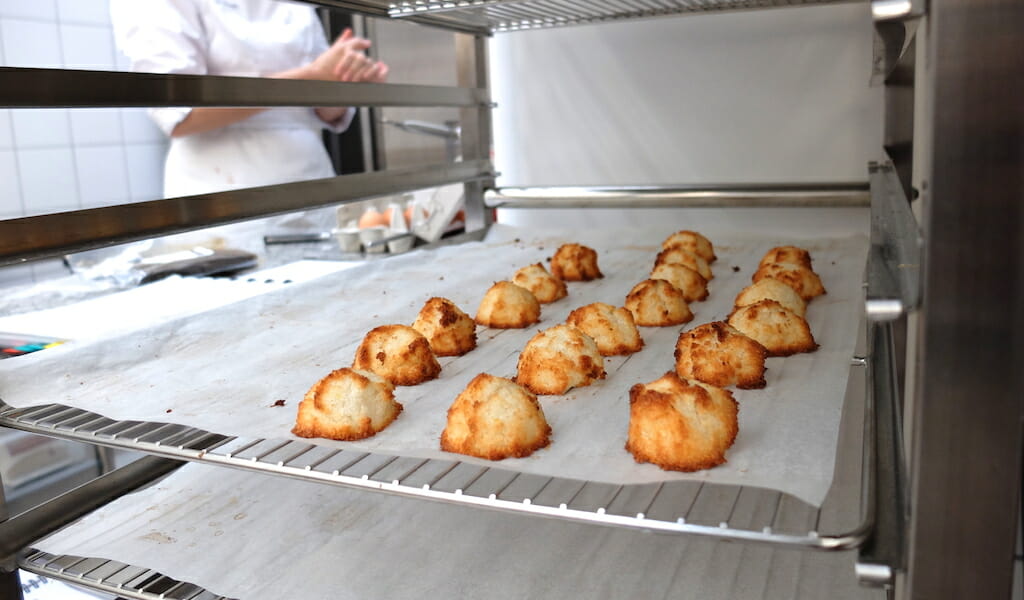 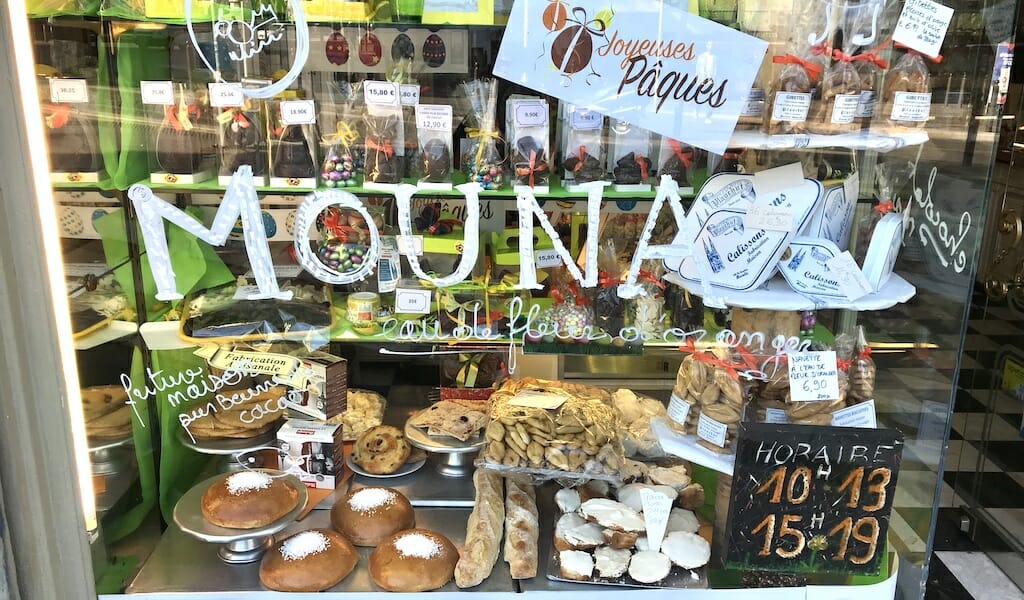 Marseille | By Alexis Steinman
By Alexis Steinman
MarseilleThough half of France’s population is officially Catholic, only 5 percent of the country regularly attends mass. Yet, les français still remain faithful to their Christian holidays. After Christmas, Easter is the second-most popular fête – perhaps because it falls on a Sunday, when lunch en famille is a French tradition that is as revered…