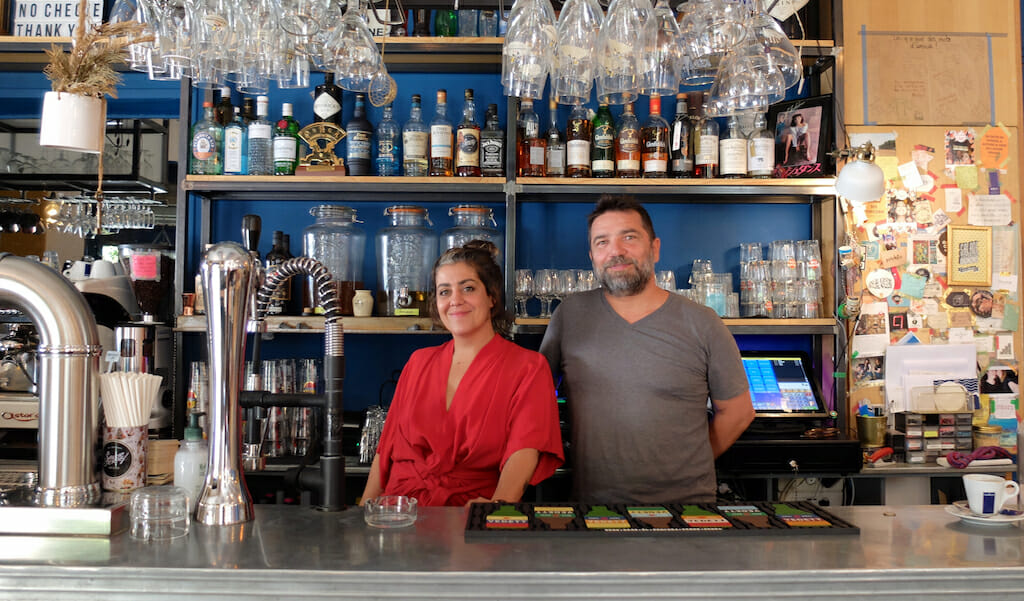 A man leans on the zinc bar, reading La Provence with his café. In wanders a helmet-clad father-daughter duo, searching for sirops (a sweet cordial) to cool off after their scoot. She looks hungrily at the platter of cookies on the bar, freshly baked for that afternoon’s snack. Beside them, the bartender peels a fragrant pile of ginger for the evening’s cocktail rush. At all-day café Le Parpaing Qui Flotte, there’s good food and drink to be had at any hour.

Neighborhood regulars ease into the day with a coffee. The tasty food draws a steady lunch crowd, and at apéro hour, the outdoor terrace fills up for post-work drinks. As night falls, a younger crowd enjoys some of the city’s best cocktails and tapas. Since opening in 2016, Le Parpaing qui Flotte (the name, which translates as “Cinder Block That Floats,” is an inside joke between owners Jean-Régis and Farah) has been a fixture in La Camas from morning to midnight. And, for fans like us who venture from another part of town, it’s the kind of place you wish you had in your quartier.

Jean-Régis and Farah didn’t take a direct route into the restaurant world. Both had dabbled in the industry: Jean-Régis washed dishes to make extra cash as a musician, and Farah worked for a caterer during her studies in London. After meeting through family friends, Jean-Régis hired Farah for his carpentry business. Its focus on build-outs for trade shows and events like Cannes sent them on the road often. 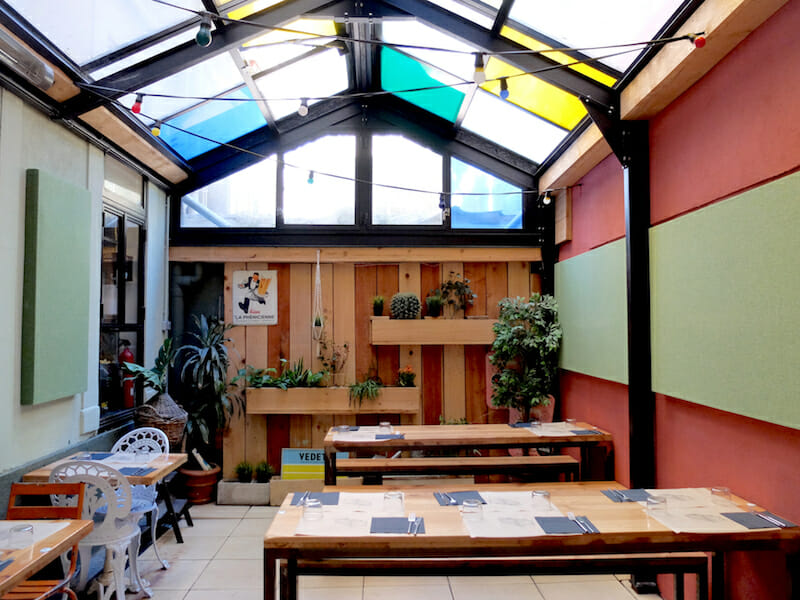 When traveling, they would fantasize about opening their own place. “We had this game,” Farah explains, “where we would say, ‘We’d make this cocktail in our bar,’ or ‘We’d never have these tables in our restaurant.’” Back at home, a shuttered bar near their atelier in La Camas, a neighborhood sandwiched between Cinq-Avenues and colorful Cours Julien, caught their eye. After it lay vacant for two years, the duo decided to take their joke seriously.

“Anything is possible in Marseille,” says Jean-Régis, as a way of explaining why his hometown was the right place for them to build their dream. “We didn’t invent the concept of eating and drinking well,” explains Farah. They simply saw there was a need for their type of place in Marseille. With its corner location and sizeable terrace on a side street, “the space dictated that it would be an all-day affair.”

With its corner location and sizeable terrace on a side street, “the space dictated that it would be an all-day affair.”

Equipped with design savvy, they transformed the tired bar into an eye-catching spot. Out went the stark white tiles; in went wooden floors, colorful mosaic tiles, pendulum lights and the aforementioned zinc bar to match the heft of the cocktails. Formerly a storage space, the back courtyard became a cozy, plant-lined patio beneath a vaulted windowed ceiling with pops of colored glass. Out front, Jean-Régis fashioned bars out of parking barriers and wooden shelves for patrons to put their drinks.

More than decoration, the piano in the dining room played an important role at Le Parpaing qui Flotte: Jean-Régis and Farah met their chef, Jérémy, when buying the instrument at their friend’s house. After honing his chops at Longchamp Palace, a Marseille standby, and Urban Kitchen, the young chef has developed a loyal following. “He’s the one who made this place,” Farah humbly shares, explaining how Jérémy’s “very technical” style and desire to do things “incredibly well” infuses each dish with delicious gravity. 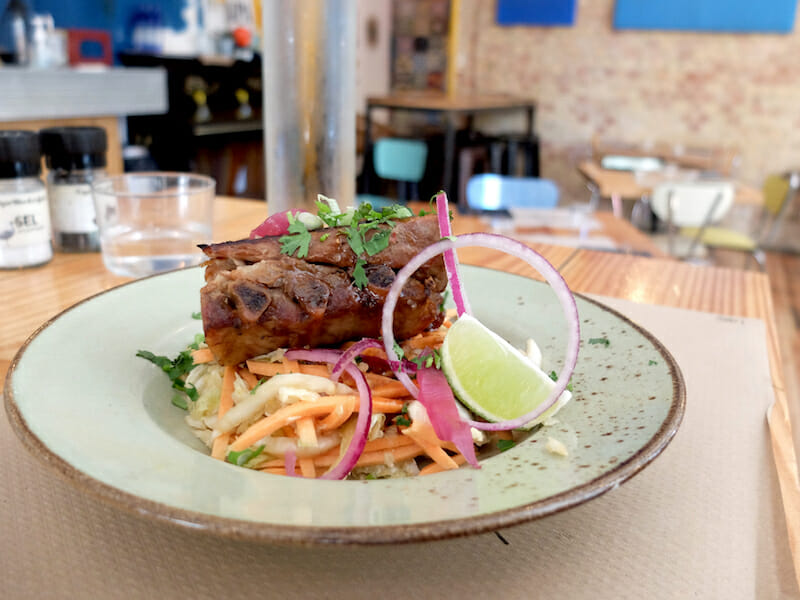 At lunch, we adore the succulent ribs confit glazed with a soy caramel – a Jérémy specialty – atop Chinese coleslaw flecked with peanuts, ginger and coriander. Among the globally inspired offerings, you might also find seared (snacké) octopus and Parmesan risotto in a squid ink broth or a bright Thai salad. To keep regulars hungering for more, the small lunch menu rotates daily. Plus, there’s always a vegetarian option – a rarity in France.

With its long bar and tables, Parpaing is one of the few French restaurants in the city where eating alone isn’t awkward – which we discovered one solo lunch. A regular arrived, spied our perch and joked that we “stole his seat.” It led to a friendly conversation rather than both of us retreating to our phones.

At night, the tapas menu – a new one each season – includes shareable plates like polenta fries and fried calamari with Sriracha mayo, and heartier options like fettuccini with beef cheeks. The food is such a draw here that Jean-Régis and Farah made Jérémy a partner to ensure he’d stick around.

Le Parpaing qui Flotte is also famous for its handcrafted cocktails. The most popular, the Parpaing, is a refreshing gin, cucumber and basil mix – imagine a Provençal Pimm’s Cup. From fruit syrups and lemonade to rhum arrangé (infused rums from Île de Réunion), every bar ingredient is made from scratch. A highlight includes the house-made ginger beer for Moscow Mule fans. 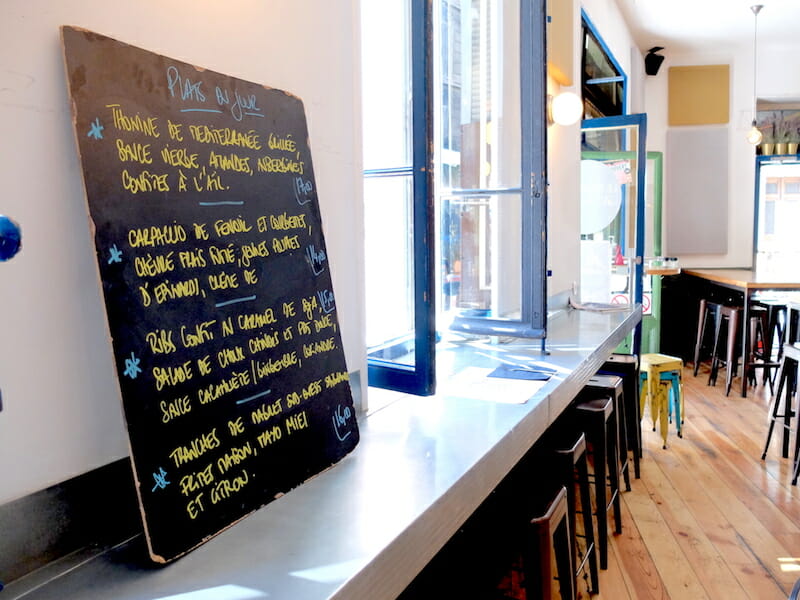 The bar is helmed by another happy accident. When their first choice wasn’t available, she suggested her husband, Sam, who coincidentally shares her skills behind the bar. The Beirut-born, tattooed bartender brings cosmopolitan flair – and the fun of ordering in English. Thanks to his mixology skills, he’s now a partner in the Parpaing family, too.

Ever creative, they recently launched petit dejeuner – including oeufs brouillé (scrambled eggs) – to fill the quartier’s breakfast void. Last year, they opened Bambino, a much-lauded Italian pizza and pasta joint around the corner. While they are honest about the enormous amount of work it takes to run a restaurant, Jean-Régis and Farah keep a sense of humor to get through the tough times.

This playfulness is the root of the restaurant’s name. “In the sea, I don’t know how to float on my back, so I sink,” admits Jean-Régis. Due to his solid build, the joke became a cinder bock (parpaing) that floated (qui flotte). “We were a bit drunk,” Farah chimes in, a fitting foreshadowing of their fine cocktails. It’s hard not to smile when they tell this story – and when you spend time at their bar. 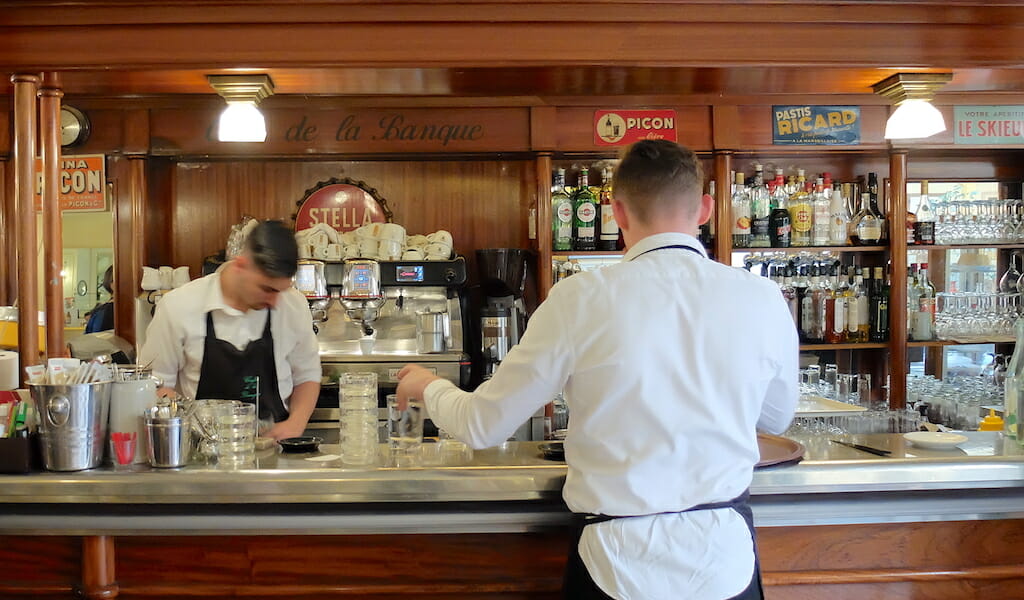 Marseille | By Alexis Steinman
By Alexis Steinman
MarseilleSome of Marseille’s most majestic buildings surround the Estrangin métro stop: the American consulate, the ornately sculpted Caisse d’Epargne bank, and the Napoleon-style Préfecture. Between them sits an equally iconic institution, Café de la Banque. Yet while its high-profile neighbors deal in banking and bureaucracy, this spot serves something more essential: a dependable place for… 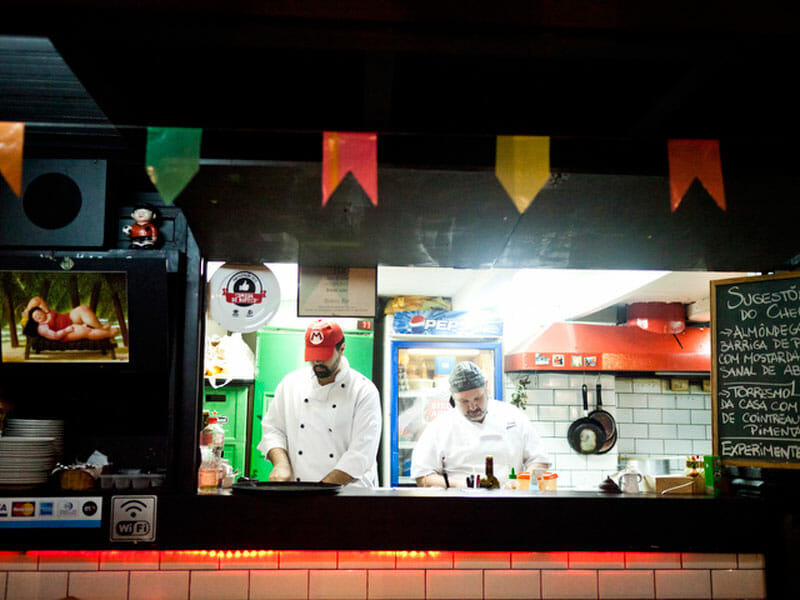 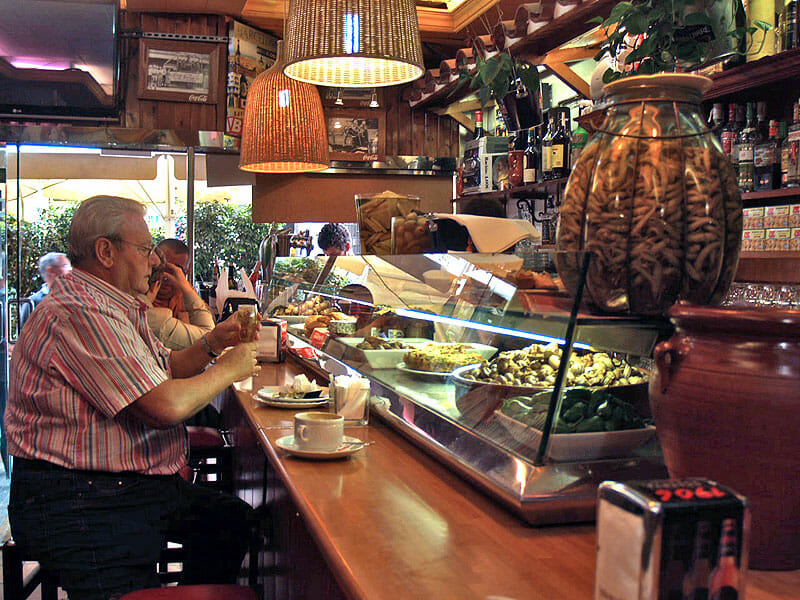