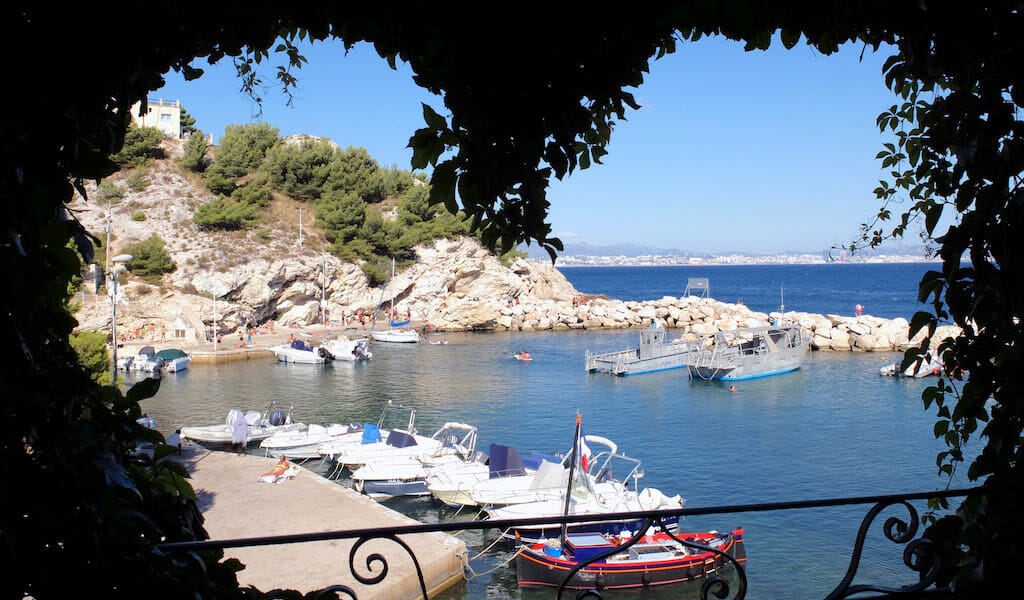 If you ask a Marseillais where to cavort on the coast, most will respond, without hesitation, “the Calanques”: turquoise coves tucked between towering limestone cliffs that can only be reached by foot, boat or paddle. Spanning Marseille and Cassis, this national park gets all the glory – and tourist campaigns – for its jaw-dropping grandeur. But, north of the city, you’ll find more intimate calanques that also merit a visit: the Côte Bleue.

Unlike the barely inhabited Calanques National Park, the “Blue Coast” is dotted with fishing villages anchored in blue coves, each one appearing to have been carved into the limestone hills. Some of the secluded ports are connected by hiking trails that weave between beach pines and the Mediterranean. Or you can take the less strenuous Train de Côte Bleue from Marseille – a picturesque route that traverses 18 viaducts between the seven villages.

Though the commuter train arrived in 1915 – each station is topped with heritage tiles that spell out the village’s name – this coastal chain has kept a low profile. It used to be only frequented by an insular community of fishermen and locals, with Marseillais and other Bouches-du-Rhône inhabitants preferring the splashier Cassis and Bandol on the other side of the Calanques. Now, some are being lured to the Côte Bleue. Some say its due to Marseille’s reign as the European Capital of Culture in 2013. We’d like to think it’s La Pergola’s second wind.

Located in Niolon, the Côte Bleue cove that boasts the best view of Marseille, La Pergola has been in business since 1958. Once an escape for Marseille mafiosos and their mistresses, the restaurant had more recently stuck to the recipe of many seaside tables: sensational view, so-so food. That is until 2016, when Joaquim and Beatrice Piedade took over. 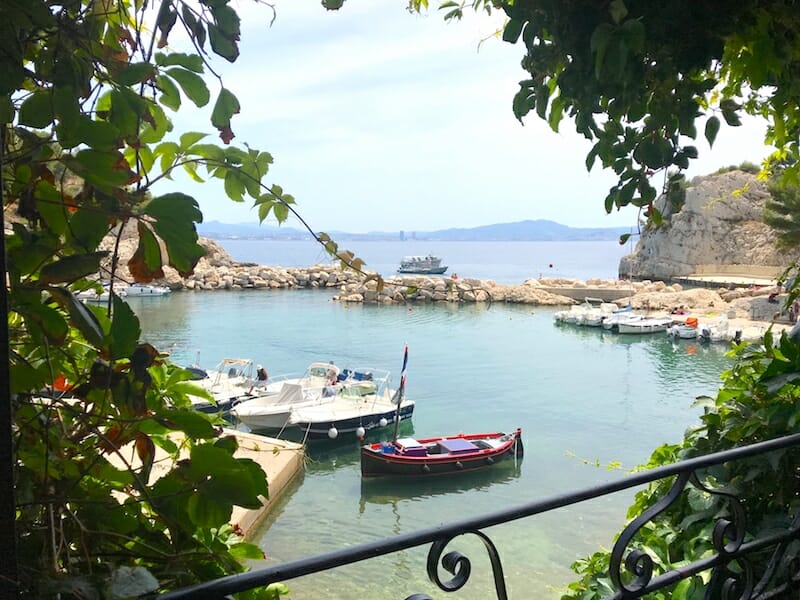 Smitten with the “diamond that had lost its shine,” the seasoned restaurateurs did a full makeover while keeping La Pergola’s relaxed ambiance. They spruced up the interior and the shaded terrace for which the restaurant is named, shaping the thick vines into heart-framed views. Chef Joaquim created a menu brimming with fresh fish and local flavors, passionate about “food that tastes good, rather than customers marveling at the technique.”

One of the best ingredients at La Pergola is the warm, yet professional customer service. This client-above-all attitude extends to the all-day hours, a rarity in France. Locals swing by for breakfast; out-of-towners enjoy a celebratory dinner; and hikers cool off with an ice cream or cocktail in the afternoon. A sign of their success? Most of their clients are regulars – a mix of locals, Marseillais and Aixois.

Born in a Paris suburb, Joaquim never planned to be a chef. But something clicked when the young accountant saw the camaraderie that the owner of his local snack bar had with his clients. To quickly “immerse in the cooking world,” he explains, Beatrice’s chef brother found him a job at an Italian restaurant working for free on the line – “the best cooking school.”

The entrepreneurial chef cobbled together his own culinary education with a chunk of diverse jobs over three decades: training with a Michelin-starred chef; opening a series of restaurants in France, Île de Maurice and Portugal – his first at the ripe age of 23; and working for large, French culinary conglomerates, learning “every front of house job” for Groupe Flo, then opening franchises for Groupe Le Duff.

Chef Joaquim created a menu brimming with fresh fish and local flavors, passionate about “food that tastes good, rather than customers marveling at the technique.”

Though the latter’s normal working hours allowed him to recharge with his family, Joaquim missed the conviviality of restaurant life. The descendant of Portuguese fishermen also longed to be back at sea, with fond memories of his family’s fishing in the traditional method of “lugging giant nets from the sea” when he was a kid.

This is how he ended up running La Pergola – and why he’s a stickler for sourcing the best fish around. Joaquim works with Le Chalutier in nearby Martigues, a father-son mareyeur (fish merchant.) They supply loup (sea bass), daurade (sea bream), and deeper-water saint-pierre (John Dory) and turbot (flounder), while also buying smaller catches from petits métiers (independent fishermen.)

Since Joaquim buys around 600 kg of fish a week (the restaurant feels more intimate that its 180 seats would suggest), he has his mareyeur on speed dial – my “own private fisherman,” he jokes. Fish this fresh requires simple preparation: just olive oil, salt and fennel seeds on the kitchen’s lava-rock grills.

Summer is the season of espadon, or swordfish. Joaquim, who is passionate about sustainable fishing, buys larger and older swordfish past their reproductive prime. Savor this house specialty two ways: just-seared steaks or smoked – a must for smoked-fish fans. The swordfish is cured gravlax-style, smoked in beech wood, and then sliced thin and drizzled with olive oil, grapefruit slices and cornflower petals. 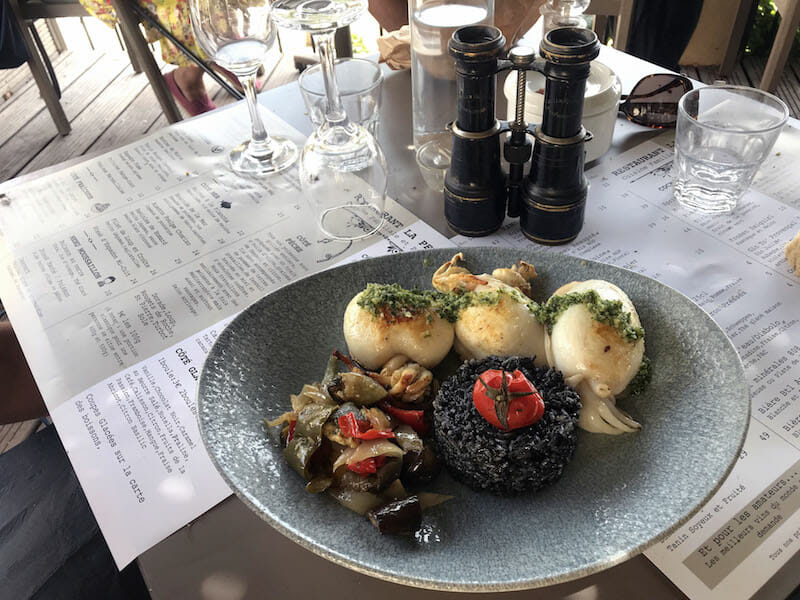 This thoughtful preparation is mirrored across the menu. Take the sepia: frozen to break down the chewy flesh, cooked sous-vide, then deliciously seared on a plancha for the most succulent cuttlefish we’ve ever tasted. Many chefs chop it into indiscernible pieces. Here, the whole, fist-sized cephalopods make it seem like the cuttlefish went straight from boat to plate.

While the French associate accras, or salt-cod fritters, with the Antilles, Joaquim explains that they originated as pastéis de bacalhau in his homeland. Joachim’s too-good-to share accras are made with his Portuguese mom’s recipe – a “trace of family history.” She also inspires La Pergola’s generous portions. As one of six children, their table always had heaping amounts of food.

Considering La Pergola is Joachim’s ninth eatery, its not surprising he’s got a three-part restaurant plan. Step one: The client comes first. Joaquim tours the room to check in on customers while the friendly waitstaff brings them binoculars to check out the view. When our waiter misunderstood that we ordered one sepia instead of two, he whisked away the mistake and brought an empty plate for sharing. No questions asked.

The second step, “be extremely thorough,” pertains to food safety, organization and staff. Trained with precision, the waitstaff efficiently works the busy dining room while the cooks are so in sync they don’t need to talk. This attention to detail fosters a strong, team spirit. “I am just the conductor,” admits Joaquim, proud of his longstanding staff. “If there are no musicians, I cannot make music.” And his dishwasher is the “king of the kitchen” – which happens to be one of the tidiest we’ve ever seen. 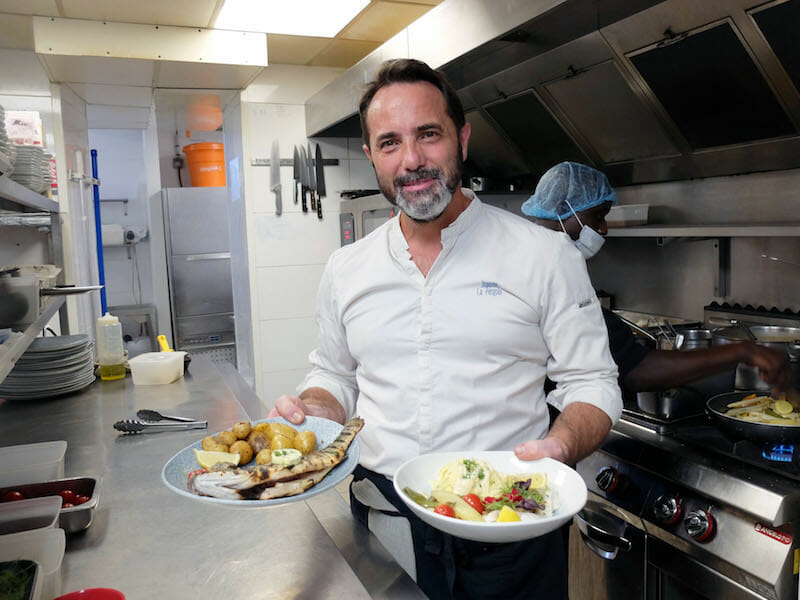 The third step, “you must love what you do,” is essential for surviving the long days, fast pace, physical work and sweltering kitchens. When we mention that our friendly waiter fits this bill, Joaquim smiles – Max happens to be the Piedades’ son.

Max has inherited their restaurateur genes. After studying at the Institut Paul Bocuse and working for Thierry Marx, he returned “home” to build up the wine portfolio and liquors at La Pergola. He loves bringing customers digestifs, sharing the history behind each glass. “He’s not just in it for the business, but the pleasure,” Joaquim smiles.

He and Beatrice are equally proud of their daughter, Cassandre, whose service prowess matches her mom’s. Even when she repeats the mask policy to a customer for the hundredth time that day – La Pergola is a rare place enforcing the Covid-19 in-restaurant mask policy – she does so as if it’s the only time, winking that “women are better students than men” as she hands a husband a disposable mask on the house.

To find La Pergola, descend into Niolon past the cabanon decorated with colorful oars and life preservers. We like to pack a swimsuit for a pre- or post-meal dip in the little port – it’s less crowded behind the jagged rocks. Or, pack decent walking shoes and take the Sentier de Douanier (Custom Officer’s trail) ten minutes west to the Calanque du Jonquier. This bright blue cove beneath a soaring stone viaduct is the Côte Bleue at its best. Especially when paired with a bite at La Pergola. 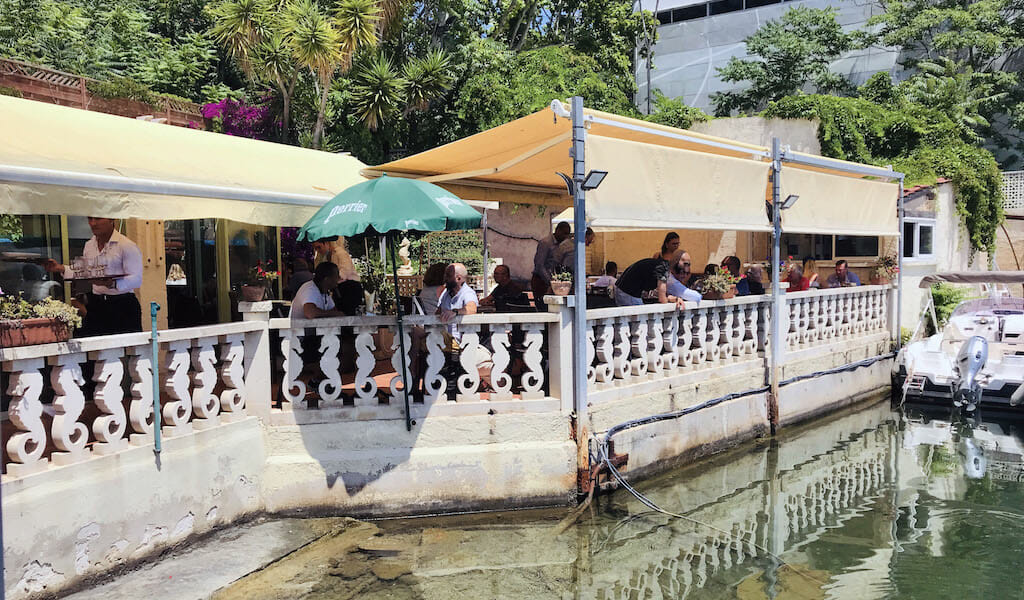 Marseille | By Alexis Steinman
By Alexis Steinman
MarseillePerched at Marseille’s northern border along the Mediterranean, the port of L’Estaque once teemed with fishermen. Starting in the 17th century, local pêcheurs would catch sardines, tuna, mackerel and poissons de roches (the rockfish that are essential to the city’s iconic bouillabaisse.) In the 1960s, these independent fishermen were swallowed up by the increase in… 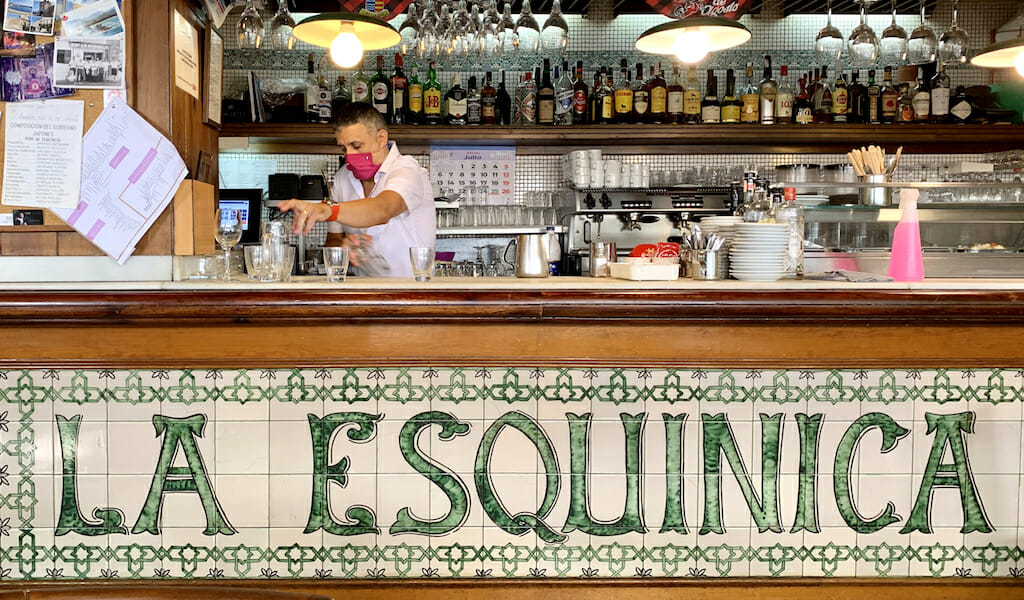 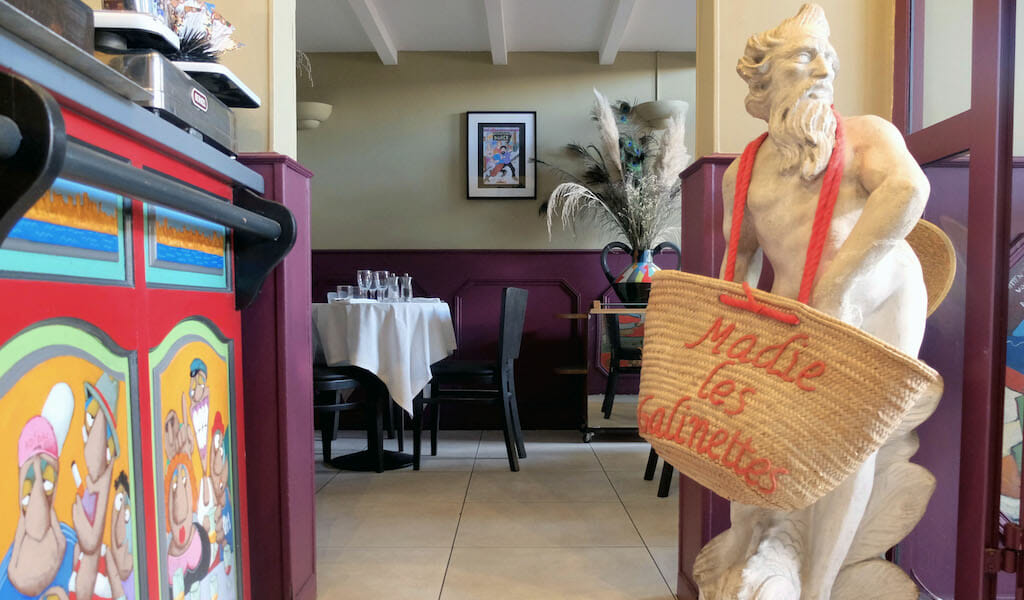 Marseille | By Alexis Steinman
By Alexis Steinman
MarseilleFrom Gascogne’s prized ducks to the buckwheat gallettes of Bretagne, each chunk of France has its distinct food traditions. In Marseille, the capital of Provence, the recipes brim with the region’s olive oil, garlic and tomatoes as well as plenty of Mediterranean fish. On menus around town, you’ll find an anchoïade here or artichauts à…