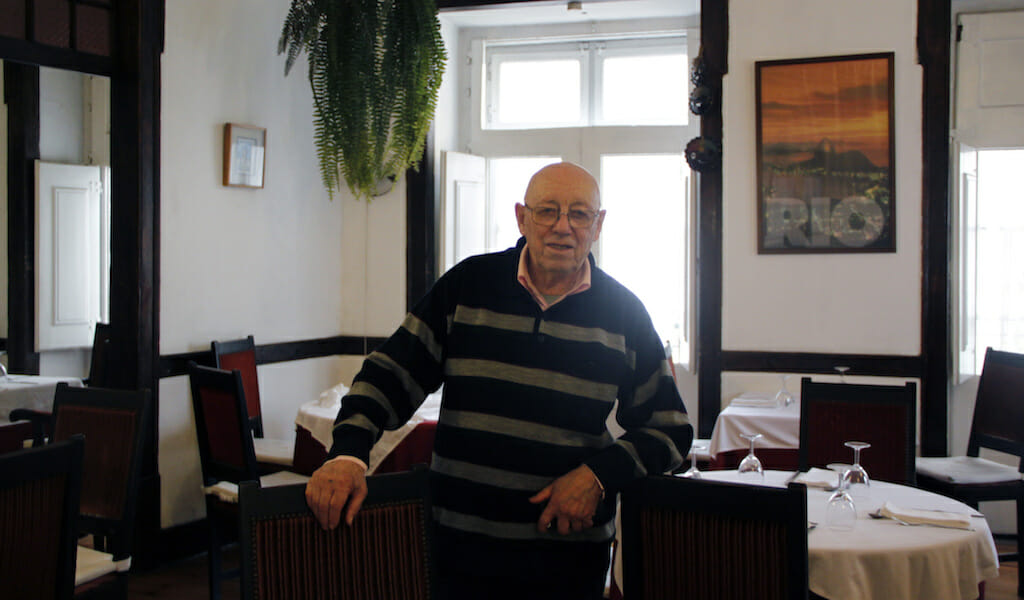 Brasuca owes its existence to Mr. Oliveira da Luz, known to locals as Juca, a trade unionist who escaped from political pressures in his homeland in 1976 to settle down in the Portuguese capital. Two years later he opened this restaurant in Bairro Alto. It wasn’t the first kitchen serving Brazilian dishes in the district, as a few other tascas – particularly those with Portuguese owners who had connections to Brazil – had incorporated some Brazilian staples in their menus, particularly the feijoada, a dense meat and black bean stew, but it was the first Brazilian restaurant opened in Lisbon by a Brazilian.

The restaurant’s four rustic interior rooms, decorated with plants, wooden figures of parrots and masks, as well as vintage posters of touristic Brazilian destinations, form a kind of spatial-temporal island inside Bairro Alto. 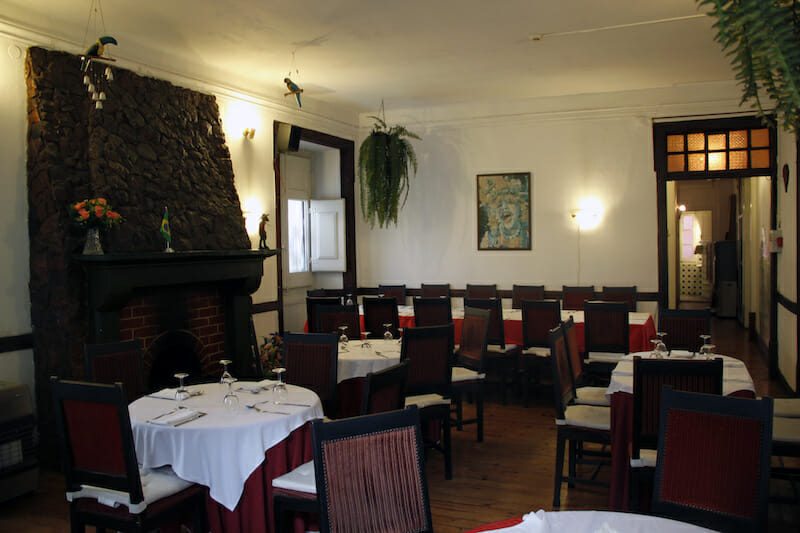 As Senhor Juca told us, the neighborhood, now a hub for bars and fashion stores, was very different when he arrived. In 1978 there were 115 restaurants huddled along the sloped 16th-century roads, and all of them were buzzing. It was the time when productive activities took place in central districts of the city; newspaper headquarters, banks and even a metallurgic factory sat among the narrow multi-family houses. In the 1980s the situation changed: worsening salaries led to less disposable income and many businesses were forced to close as a result. “Bankers suddenly were eating at the snack bar instead of my restaurant,” Juca tells us. “However, I resisted the crises of 1998 and 2008. Now I have customers from all over the world.” Tourists are behind the boost to this resilient restaurant, more often than not attracted by its retro sign on the corner of the building outside.

Born in Caxias do Sul, a city in Brazil’s southernmost state of Rio Grande do Sul, chef Juca learned to cook to feed himself and his siblings, as his parents worked long hours. He brought to Lisbon some specialties from his region, a few of which had reached his neck of the woods in the first place due to 19th-century Italian and German migration. Ch’arki is one example – given that Rio Grande do Sul was the first and largest area the gauchos were farming, this dried and salted meat made of horse, cow or llama is common to the area, and can also be found in Argentina, Uruguay and the Andean region.

At Brasuca, a special mention goes to meat dishes, in particular picanha – a cut of beef, whose thin line of fat confers incredible flavor during grilling, accompanied by white rice, fries, black beans, chopped turnip greens and the omnipresent farofa – the toasted cassava flour mixture present on all tables. Other condiments include the classic piri-piri and a sauce of raw onions, green peppers, vinegar and oil. 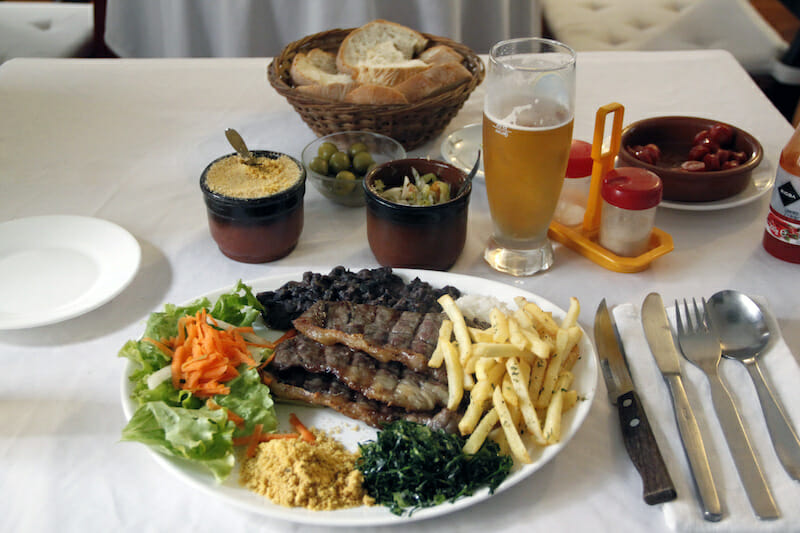 Food from other regions is also on the menu, such as the famous moqueca, a stew of salt-water fish or meat, tomatoes, onion, garlic and coriander, typical from the southeastern state of Espírito Santo and the northeastern state of Bahia. At Brasuca, the Bahia-style prawn moqueca is our favorite among the fish dishes: the prawns are cooked in palm oil, peppers and coconut milk and accompanied by pirão, a dense soupy side made of cassava flour boiled in a fish broth.

As may be expected, the feijoada, perhaps the most widely known Brazilian dish, is another star of Brasuca’s menu. Some make the claim that this dish was created by slaves in Brazil who would mix the beans with the pork leftovers (feet, ears and tail) given to them, while certain scholars argue that black beans were a staple food of the European colonizers. Whatever the origins of feijoada, the stew of beans, beef and pork (chorizo and blood sausage) was immensely popular and later introduced in other former Portuguese colonies, with variations of the dish becoming widespread in Macau, Angola, Mozambique and Goa. And it’s still eaten by all sections of Brazilian society as a celebratory tradition.

In 1970s Lisbon it was difficult to find these famous black beans, and several other ingredients necessary for a Brazilian kitchen. Senhor Juca would get them sent from Paris, where many Brazilians were living at the time, or look for them at Casa de Angola. Today, they’re easy to find, with shops popping up to serve the wave of new emigrants coming to the capital city. Brasuca, here from the beginning, will likely outlast this latest boom and stay a while longer. 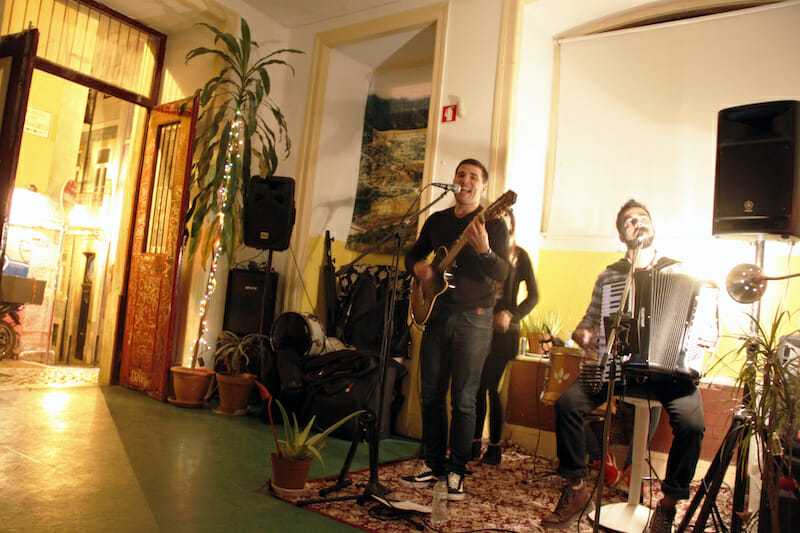 Lisbon | By Francesca Savoldi and Syma Tariq
By Francesca Savoldi and Syma Tariq
LisbonLisbon’s communities from Portugal’s former colonies provide the strongest link to the country’s past, when it was the hub of a trading empire that connected Macau in the east to Rio de Janeiro in the west. Though integral elements of Lisbon life, these communities can sometimes be an invisible presence in their adopted land, pushed… 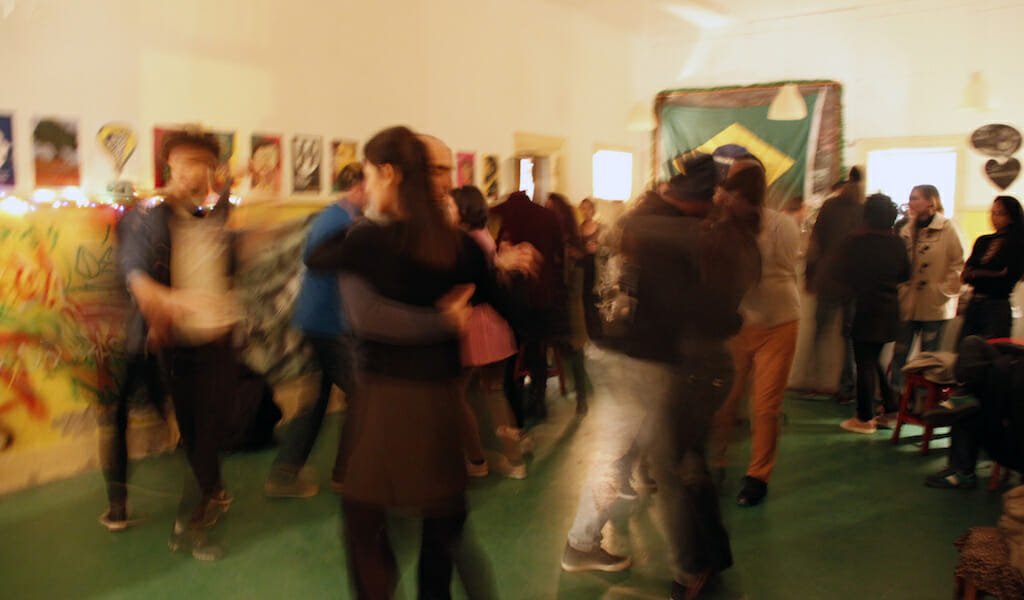 Lisbon | By Francesca Savoldi and Syma Tariq
By Francesca Savoldi and Syma Tariq
LisbonAmong the many bars of raucous Bairro Alto, Casa do Brasil is a steadfast nighttime institution for Lisbon’s Brazilian community, hosting concerts and cultural events in a non-profit capacity. This two-floor venue is the place to chat, drink, eat and dance to a myriad popular rhythms from the homeland, all performed live: the festive accordion-drone… 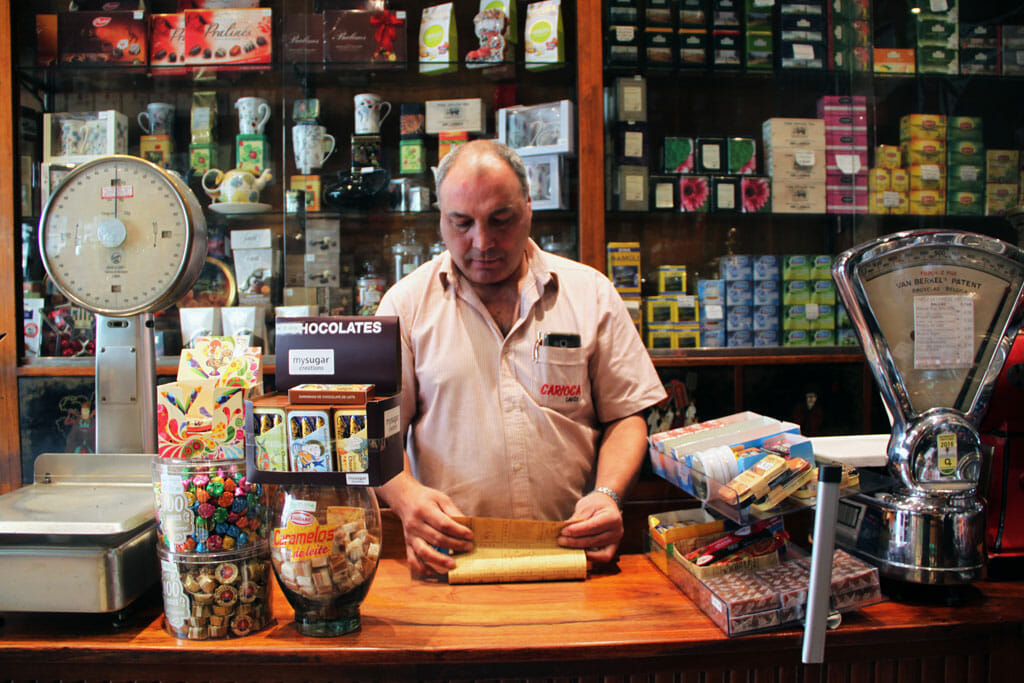 Lisbon | By Francesca Savoldi
By Francesca Savoldi
LisbonThough ceramic dishes or tinned sardines are the standard take-home souvenirs for visitors to Lisbon, a less traditional – but still unique – gift from the city is the source of the warming aroma that permeates its cafés morning, noon and night. A strong bica (espresso) is an integral part of Lisbon’s smellscape, and the few chimneystacks…