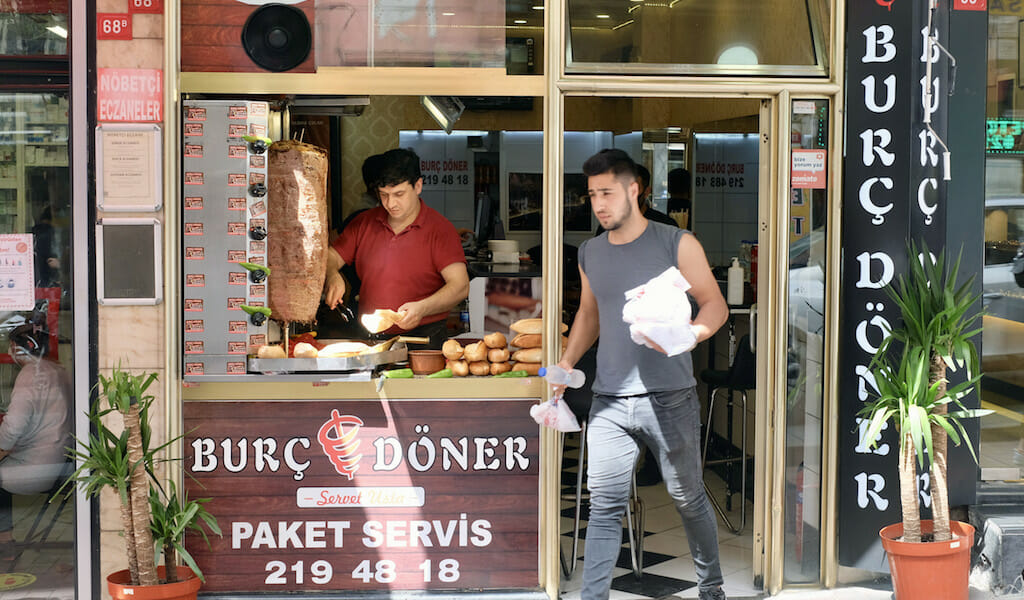 The 2nd of June was a warm, bright, sunny day fizzing with the energy of late spring, and things were oddly normal in Istanbul’s Kurtuluş neighborhood. The day before, scores of businesses opened their doors for the first time in over two months as part of an effort by the government to return a sense of normality to the country and breathe life into its struggling economy as Turkey approached three months since its first case of coronavirus was announced.

Cafés and restaurants, previously only allowed to offer takeout or delivery, now welcomed dine-in service, providing that tables were spaced apart in accordance with social distancing guidelines and a bottle of hand sanitizer was available atop each one. Though establishments serving alcohol have not officially reopened, in a place where rules are either flexible or ignored entirely, small corner pubs and beloved meyhanes and grill houses were lined with diners and drinkers, perhaps due to a loophole since these places also hold food service licenses.

Most people out on the streets were wearing their masks, though they were quickly flung off or hung around the neck by those tucking into a plate of buttery rice under white beans, or sipping a cold glass of rakı together with an array of meze. The bars and meyhanes were hurting after the extended period of closure, and their customers couldn’t wait to indulge. Meanwhile, restaurants that didn’t previously offer delivery did so during the first months of the pandemic in order to stay afloat, and motor-scooters could still be heard buzzing down the backstreets transporting food even during the series of weekend lockdowns that were imposed citywide. 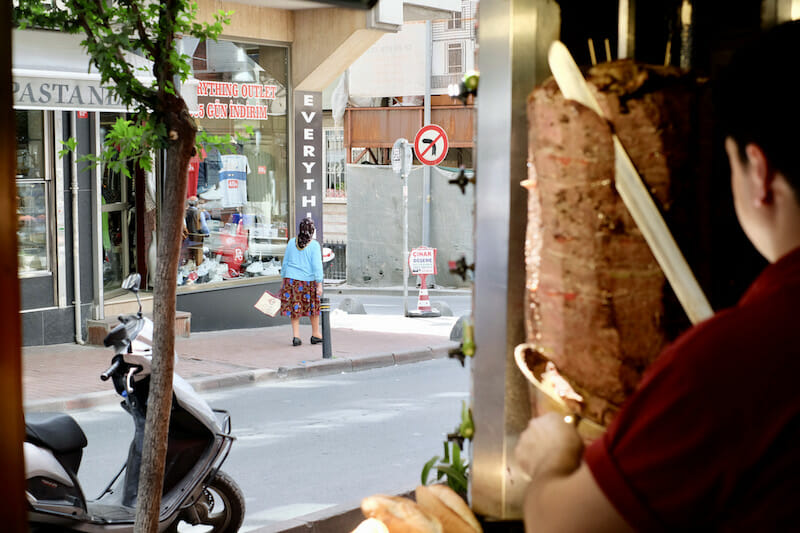 One beloved hole-in-the-wall didn’t feel the pressure to stay open as the pandemic worsened in Turkey. Burç Döner, a tiny shop with a counter and four tables on a busy stretch of Baruthane Caddesi, which links the Kurtuluş and Feriköy quarters, shut down for 50 days, a break they could likely afford to take given the normally high volume of customers. Burç reopened last month and resumed dine-in service in June, removing two of the tables to adhere to physical distancing in the cramped dining room.

Burç is run by the Ülkü brothers, who hail from the southeastern province of Bitlis. Servet, tall and formidably built, deftly and tirelessly mans the hulking wheel of döner while Hamza and Yunus expertly run the front of the house, managing the endless barrage of phone-in orders for delivery and the consistent throng of diners and takeaway customers.

“We aren’t used to resting,” said Yunus with a grin, when we asked how things were during their hiatus. The fact that they knew the exact number of days they were closed reflected their desire to get back to work. The Ülkü brothers, who work together with several more relatives, are no strangers to the grind and don’t show the slightest sign of stress even as they plow on through the thickest stretch of the lunch rush.

“We aren’t used to resting,” said Yunus with a grin, when we asked how things were during their hiatus.

Rolling in during the early afternoon when things have calmed down a bit, we chatted with the brothers and ordered a special variation not listed on the menu, döner inside half a loaf of fresh, crusty French bread purchased from the bakery two doors down, topped with the works: hand-cut French-fries, green peppers, onions and a sprinkling of oregano.

Open since 2012, Burç is a relative newcomer to a corner of the city where businesses often close as quickly as they open, an indicator of customer allegiance to the numerous multi-generational bakeries, butchers, delis and pudding shops. It quickly became the top döner joint in the Kurtuluş/Feriköy/Bomonti area, owing to the consistent quality, reasonable prices and stoic yet friendly nature of the Ülkü brothers, who are perpetually busy from the time they open up until they run out at around 4 or 5 p.m. (A true indicator of a quality döner shop.)

Servet usta (the “master” at the spit) said that they buy their meat from Kınalıadalı Kasabı Doğan, a butcher that has long been a fixture in the neighborhood, just a short walk up from Burç on the right side of Baruthane. The döner is a combination of butcher cuts and ground meat, mostly beef with a smaller amount of lamb added to the mixture. This gives it a bold yet clean flavor that mingles harmoniously with the toppings, and each table has a jar of fiery, bulb-shaped, neon-yellow pickled peppers that customers can add at their discretion. 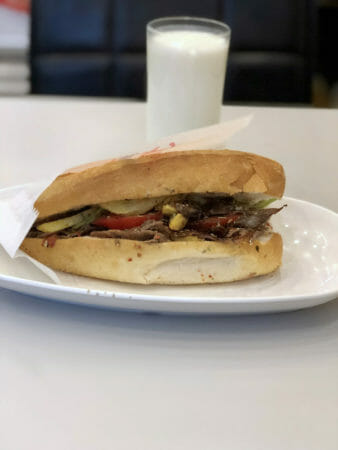 Right as our to-go order hit the counter, a late rush descended upon the shop, resulting in a small line out the door that is a customary sight at Burç particularly during the lunch hours. We thanked the brothers, took our sandwich home and dived in. It seemed to disappear in seconds, and we realized how much we missed a place that we had patronized around twice a week for the past several years.

After many weeks of a lull in the daily number of new Covid-19 cases, which spurred the normalization initiative and ended the weekend lockdowns, the figure again exceeded the four-digit mark on June 12, surging further the next day. In spite of that, there seems to be a diminished sense of fear of the virus, evident by the number of people casually sipping cold pints of Efes at the bars and dining in Kurtuluş’ restaurants – perhaps a result of the serious fatigue the neighborhood and city has sustained over several months of isolation.

We are still apprehensive to indulge in our favorite pastime, a slow, rejuvenating meal of meze with triangular slices of white cheese and a boat-shaped serving of fresh, sweet green melon alongside several glasses of rakı, which suits celebratory and troubling days alike. It still seems too soon, particularly given the spike in cases. On the other hand, Istanbul needs its restaurants, and they cannot stay closed forever. We might not be jostling for a spot on the narrow counter at Burç but we can’t resist ordering to-go and rushing home while our sandwich is still hot. 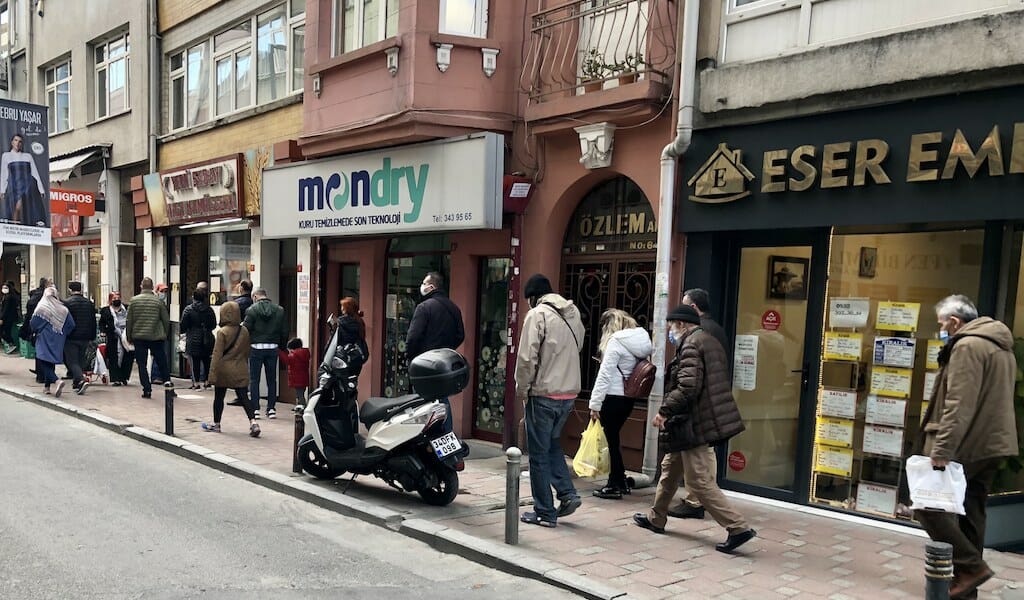