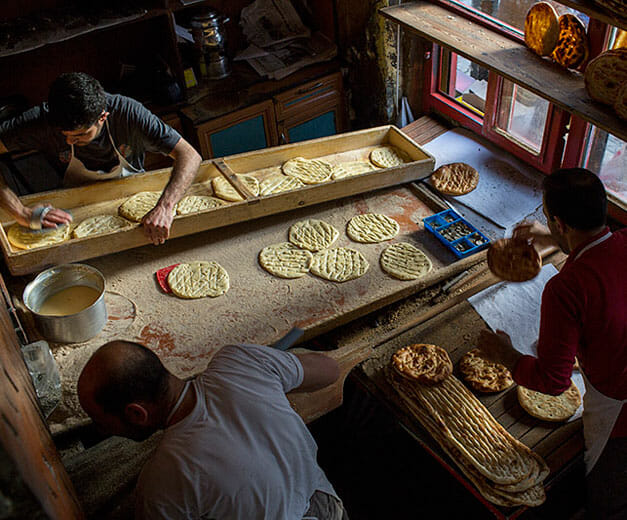 Editor’s note: To cap off our annual review of the year’s best eating experiences, we’ve unleashed our imaginations to create the Turkish food court of our dreams.

After a period of protest, we finally broke down and visited the Zorlu Center, a new, high-profile shopping mall in Istanbul and a showcase of international brand names, from Fendi to Jamie Oliver. Our initial attraction was the promise of a particularly well-kept playground, but while we were there, we visited Eataly, the all-Italian culinary emporium.

Sitting there in the Eataly food court munching on something Italian that looked like a gözleme and that our waiter described as similar to the Turkish flatbread, we were surrounded by shelves lined with beautifully packaged Italian foodstuffs. The place seemed to go on forever – was that an upstairs? Huge wheels of cheese were parked right there by a gelato stand, and beyond that was a pasta section that you’d want to clear a Sunday afternoon out for, just to browse. It was a stimulating experience that got us thinking, what would a Turkish version of Eataly, or – if we were charged with naming it – “Eaturkey,” look like? 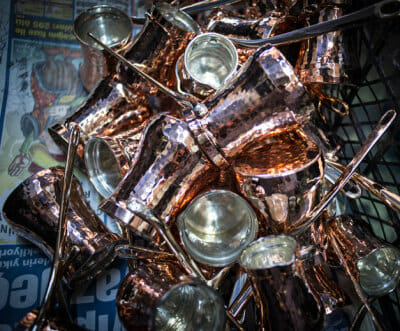 There would be a whole section of well-curated pekmez (fruit molasses) and, behind a counter, precious jars of Macahel honey from the Black Sea region, locked up like Cuban cigars at the duty-free. The staff training program would have to commit a full day to the subject of tarhana, that beguiling Anatolian soup base with countless varieties. Kekik, the term used for such a wide range of thyme-like spices, would be categorized by character and region. Fine copper coffee pots, alongside huge curved zırh kebab knives and deep clay güveç pots, would line the walls leading to the fresh vegetable section, where hot green peppers would be separated from not-hot ones. For the impulse buy at checkout: sheets of fruit leather-like pestil and coils of walnut sucuk. And nowhere in this store would a product be marketed as “Turkish Viagra.”

But the section we fantasize about most is the food court. With the year at its end, we’ve been collecting our Best Bites of 2014 and those of friends with expertise in the field to form an ongoing nomination list for the Turkish artisanal food court of our dreams, an imaginary lineup of our favorite traditional foods found within these borders. This is a work in progress, but a fine start, we think.

Robyn Eckhardt and Dave Hagerman of EatingAsia nominated Küçük Yıldız (pictured at the top), “a sweet, tiny fırın” – or bakery – “in Van,” where a flaky, almost pie crust-like round pastry is made. “So beloved, the fırın sends them by the box load to Istanbul during Ramadan so homesick folks from Van can eat before dawn,” Eckhardt told us.

Küçük Yıldız’s wood-fired oven, the hearth of the food court, would also be charged with producing traditional flatbreads like lavaş and tırnaklı ekmek for two other establishments at adjacent counters. 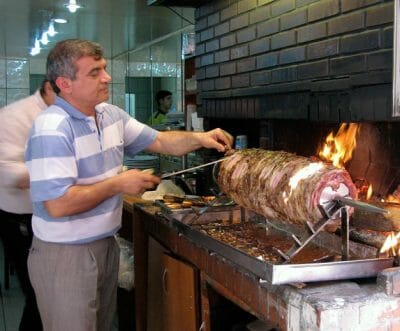 Piping hot lavaş would be hustled from the oven to the prep counter beside a wide oak fire over which Özcan Bey from Şehzade Erzurum Cağ Kebabı in Istanbul would be working the horizontal spit of lamb for his peerless cağ kebabı. CB’s own Roxy Darrow couldn’t find one as good in all of Erzurum, the eastern Turkish city where the dish hails from. “My favorite thing to eat in Istanbul, maybe anywhere,” she said.

Sharing a ventilator with Şehzade would be the Ünlü Fulya Dürümcüsü cart, serving up some of Istanbul’s best street-style Adana and Urfa mincemeat kebabs, according to chef Semi Hakim of Gastronomika. Also occupying some grill space would be the best sausages of Istanbul, kobasica, grainy and fat-plugged, redolent with red pepper, made by Mirza Köftecisi.

But before the grills are fired up, just as the morning shift starts, you’d inevitably see security guards and stockboys trying to keep their shoes clean while plowing through a nohut dürüm, as we experienced it near the greenmarket in southern Turkey’s Gaziantep this year. Cooked-down chickpeas so creamy, the better part of a crisp and tangy çoban salatası and a liberal dose of Urfa peppers rolled in a half round of warm tırnaklı ekmek – this is probably the only reason that Gaziantep gets up before lunchtime.

The real estate afforded to a lokanta (a Turkish version of a trattoria) would be hard won by Bizim Lokanta, in Izmir, a place that proves that a lokanta can be utterly reliable and full of surprises. Along with lokanta staples, perhaps they’ll offer their slow-cooked white beans with apple or a tripe stew that conjured, for us, a bowl of sautéed wild mushrooms. That’s the lokanta of the year and probably has been for the three generations they’ve been in business.

In winter there would be a roving sahlep seller, Hüseyin Bey, along with a brick-and-mortar ice cream stand manned by Kazım Usta of Özgüler Dondurma in Gaziantep, who serves emerald-green pistachio ice cream, which, according to our local expert there, Filiz Hösükoğlu, is “simply the best.” 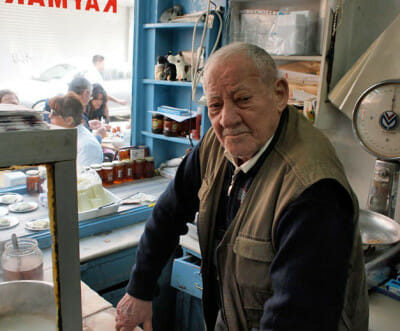 And at the checkout counter, working the register, would be Pando, Istanbul’s legendary kaymak maker, who this year was cruelly evicted from the shop operated by his family since 1895. Pando’s here not for his legendarily erratic accounting skills, but because in the food court of our dreams we recognize that there is no mastery without masters, and that lease doesn’t expire.

By
Istanbul Eats
, photos by
David Hagerman and Monique Jaques and Ansel Mullins and Yigal Schleifer