After four years of publishing weekly dispatches from Istanbul’s culinary backstreets (on IstanbulEats.com and now on this site as well), we are still regularly surprised by new discoveries, impressed by the staying power of old standards and shocked by how quickly so much can change. For better or for worse, it is that dynamism that Istanbulites line up for, and the city never seems to run short on it. Heading into 2013, we are licking our chops in anticipation of the expected and the unexpected, which are always sure to be delicious, or at least interesting. Here are our Best Bites of 2012.

Chacha at Café Niko
As good as the food is in Istanbul, the city is sadly lacking in the drink department. Given the choice of absurdly overpriced wine and industrial fermented swill, we’d often contemplated a dry existence – that is, until our life was changed by a bottle of black-market chacha. At Café Niko in Aksaray, the first cup of this homemade Georgian grape spirit made us blush self-consciously at the thrill of a drink on the wild side. With the second cup, we began to taste the fruit and appreciate the smoothness; we’d had enough rough chacha in the past to know that this was actually a fine one. With the third cup, we marveled at how such a unique, artisanal liquor ended up in the cooler of a bus station in Aksaray. Could this be the intended destination? If so, Istanbul is in for very good cheer in the future. Here’s to that.

Lamb Chops at Adana Ocakbaşı
In a city so thick on the ground with kebab joints, it’s not easy to name the best one. For a long time Zübeyir was our “favorite,” based on a complicated calculation of personal relationships, proximity to home and, of course, the food. But this year we started eating at Adana Ocakbaşı, which quickly became our new favorite for one simple reason: they serve the best lamb chops in town. The curly-haired sheep of Eastern Thrace is one of the tastiest in the world, and in the hands of the grill master at Adana, its fat-rimmed chops are transformed into something near to perfection. There could be better, but we haven’t found it. 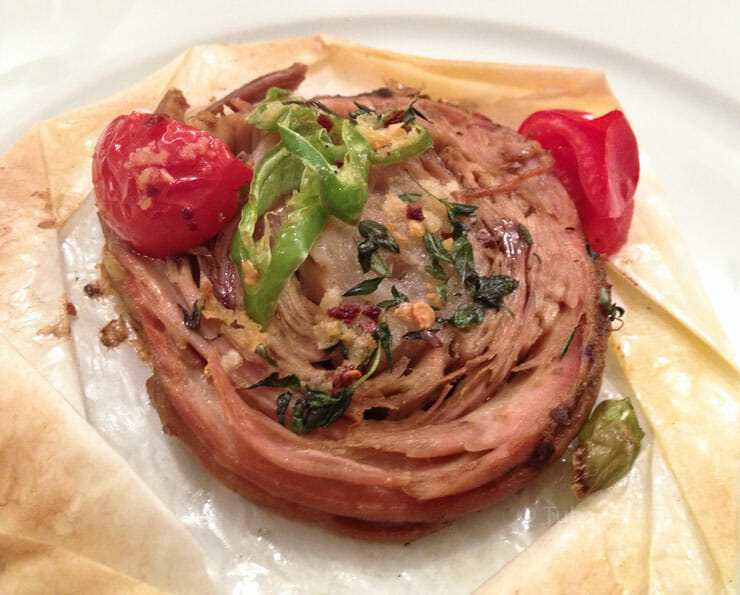 Kantin’s Kokoreç
In 2012, we ate more than our fair share of kokoreç (grilled lamb intestines), probably several full rolls if we tallied up all of the porsiyon servings and yarım ekmek sandwiches we consumed. But after so much of the same, it felt like the first time for us when Kantin’s chef-owner, Şemsa Denizsel, presented us with her take on this Istanbul street food classic. Whereas traditional kokoreç-makers char up an industrially produced log of organ meat and chop it together with spices, chef Şemsa sources hers fresh and gently oven-roasts them in parchment with little other than a few cherry tomatoes. These flavors reach a funky depth only known to the Hammond organ. That’s a ditty we wish Şemsa would teach some of the self-declared “usta” around town.

Hamsi Şiş at TKB
Filleted hamsi (Black Sea anchovy) is a luxury that most places in Istanbul aren’t willing to offer. Preparing these tiny fish is labor-intensive, like peeling an orange down to its juicy flesh. But on a recent rainy afternoon, Muharrem Usta at Tarihi Karaköy Balıkçısı (TKB) happily stripped the fish down to its hamsi essence and skewered them for us. Grilled over a fire and quickly plated, these hamsi practically liquefied upon consumption, leaving a hint of the Black Sea on the tongue and a powerful desire for a second order.

Serger’s Katmer
One of the pleasures of eating katmer – sheets of phyllo-like dough wrapped around bright green ground pistachio nuts and a dollop of snow-white kaymak and then baked – is watching your fellow diners melt down in unrestrained cries of joy after taking their first bite of this sweet, flaky and utterly irresistible specialty from Gaziantep in Southeast Turkey. We were reminded of this on a late summer day earlier this year when we tagged along with a small group that was taking our “Two Markets, Two Continents” walk, which makes a stop at Serger, a sliver-like storefront bakery in the Moda neighborhood on Istanbul’s Asian side that serves nothing but treats from Gaziantep. Serger’s katmer is so sinfully good it should be treated as a controlled substance – which, in a certain way, it is. Just as is done in Gaziantep, Serger usually only serves katmer in the mornings, lest the locals do nothing but eat it all day long and then pass out in a kaymak-and-pistachio-induced haze. In 2013, we expect to find ourselves coming up with numerous excuses to be in Moda in the morning.