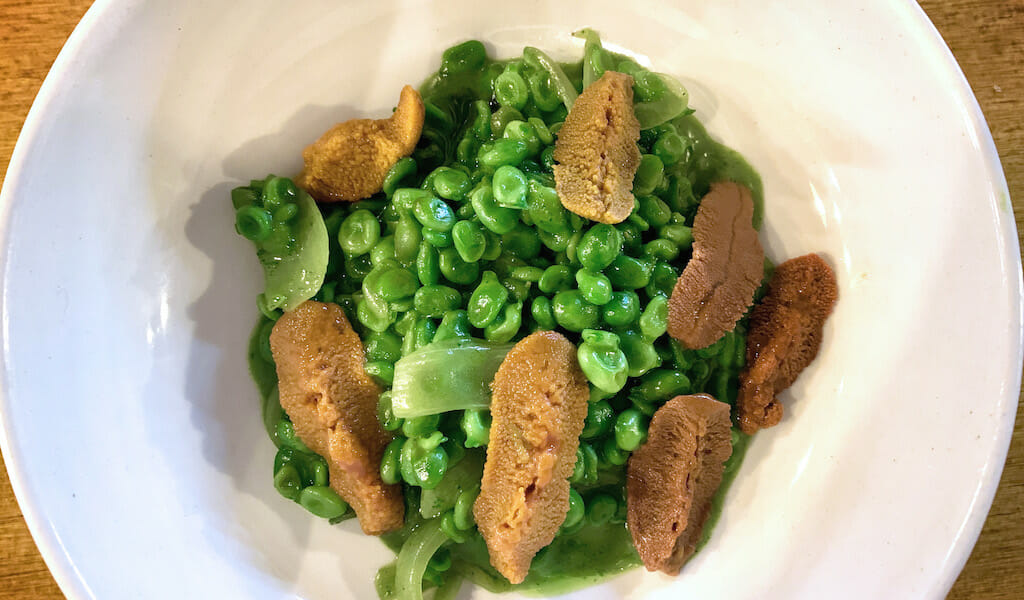 Born right before the Covid-19 storm, Taberna Noroeste opened its doors in February 2020, mere weeks before the pandemic hit Spain and strict confinement measures forced them to close. It was a turn of events that spelled disaster for many established restaurants and food businesses, let alone one that was brand new.

Yet this project from the chefs Javier San Vicente and David López has grown healthy and strong, despite the hardship, and emerged with a unique culinary identity, now known across the city for elevating the popular cuisines of Galicia and Castilla y León (Castile and León, in western Spain) while incorporating Catalan touches. 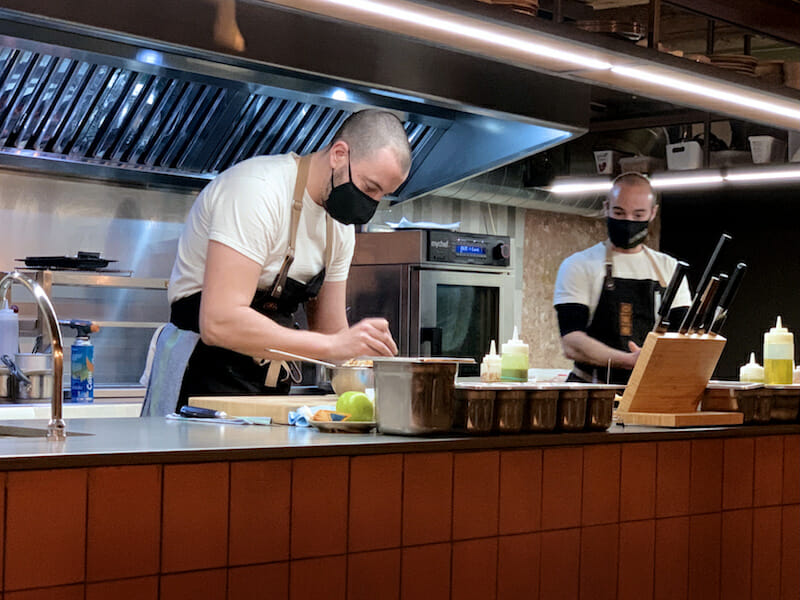 Taberna Noroeste is representative of a certain type of small venue in Barcelona: Long and narrow, it opens with the bar, which is followed by a dining room and adjacent open kitchen, where Javier and David perform their northwestern magic. The space has vacillated between full and empty over the past year, going from a grand opening to a drastic closure over the course of a month, followed by a series of openings and closings depending on the ever-changing restrictions regarding indoor dining. Now they can only open for lunch, with limited seating, and have opted not to offer takeaway.

Cash is short but satisfaction has functioned as a form of compensation and created a certain balance. “It was a very bad year, but for us it was a very good one. We got to open, although we had to close very soon,” Javier explains. “Opening and closing the restaurant so many times allowed us to change the menu and learn the ropes – we could rethink and reconsider our work several times. But every time we opened, people welcomed us with enthusiasm.”

Both Javier, originally from Galicia, and David, from Salamanca, a city and province in the Castile and León region, worked for many years in celebrity Catalan chef Carles Abellán’s flagship Tapas 24 restaurant. “We missed doing other kinds of cooking,” Javier says. “What we make here [at Taberna Noroeste] are the kinds of dishes that we always wanted to do at Tapas 24 but couldn’t. 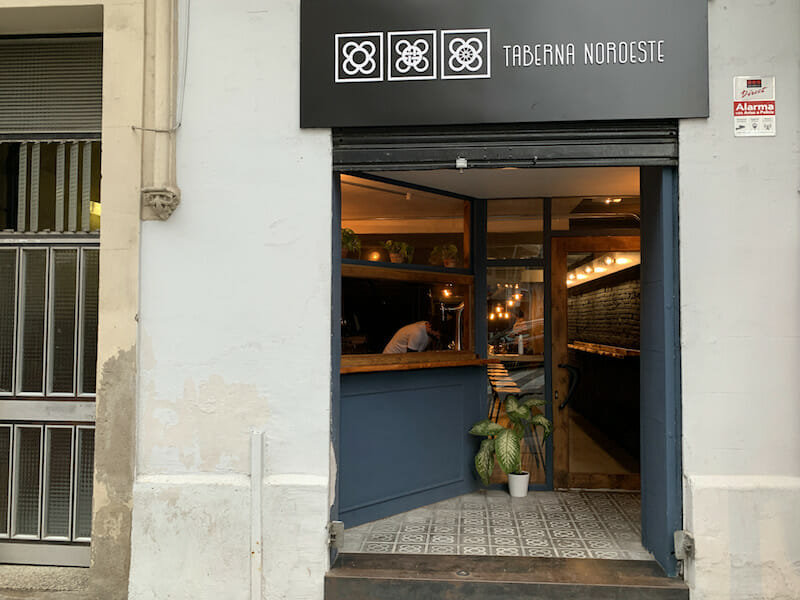 More than just a Galician or Castilian restaurant, Taberna Noroeste is equally rooted in both areas, each of which has its own powerful culinary identity, while also reflecting the Mediterranean environment they find themselves in. “You go to the old cities of Salamanca [the province] or Galicia and they look very similar, and the restaurants all use very good local products. You can eat great in a lot of places,” Javier says. “But the products you can get here [in Barcelona] are also amazing.”

Playing with a wide variety of ingredients and representing their respective hometowns, the two chefs work together to translate and polish these popular cuisines into a modern language, one that’s more sophisticated, with less topics and more interesting content. No jamones ibéricos hanging in the front, no vermouth time on Sundays, no Galician-style octopus. As Javier tells us, “Our identity is tied to popular cuisine, with some creative touches. But we want the real thing rather than a focus on fusion. The food we cook is more like a conjunction. For instance, the pig ear is something traditional in Galicia, but also in Salamanca. Or for a sofrito we can use cecina (dry cured beef, traditionally from León), jamón de Guijuelo (Guijuelo, in Salamanca province, is one of the Designation of Origin areas with the best jamón ibérico in Spain) and Galician chorizo. Or the cocido, yes, cocido is traditional in Galicia, but also in Castilla and Madrid. Or the red mullet, that is from here [the Mediterranean], grilled but with a sauce of caldeirada [Galician fish soup]. This is the conjunction. This is popular cuisine. We don’t want to cross the line, and we don’t want to incorporate international cuisines – this very popular now, and I love it, but it is not our thing.”

“Our identity is tied to popular cuisine, with some creative touches. But we want the real thing rather than a focus on fusion.”

They have a small yet powerful menu of 15 tapas. Some carry the common thread of smoke from their Robata grill, which is fueled with sarmiento (vine branches). Like their open empanada (a typical Galician dish) of calçots and romesco (classic Catalan ingredients), and the hearty surf-and-turf combo (mar i muntanya is a Catalan staple) of stingray (a traditional fish in Galicia), pig ear (common in both Galicia and Salamanca) and cecina (typical to Salamanca), all in a delicious stew of chickpeas – the latter is perfect for winter or to shore up courage for the difficult circumstances of daily life in Covid times. Another powerful tapa is their celebrated crispy croquette-bomb of cocido (a stew, very similar to the Portuguese cozido), which features a creamy and intense interior balanced by the addition of pickles served on top. 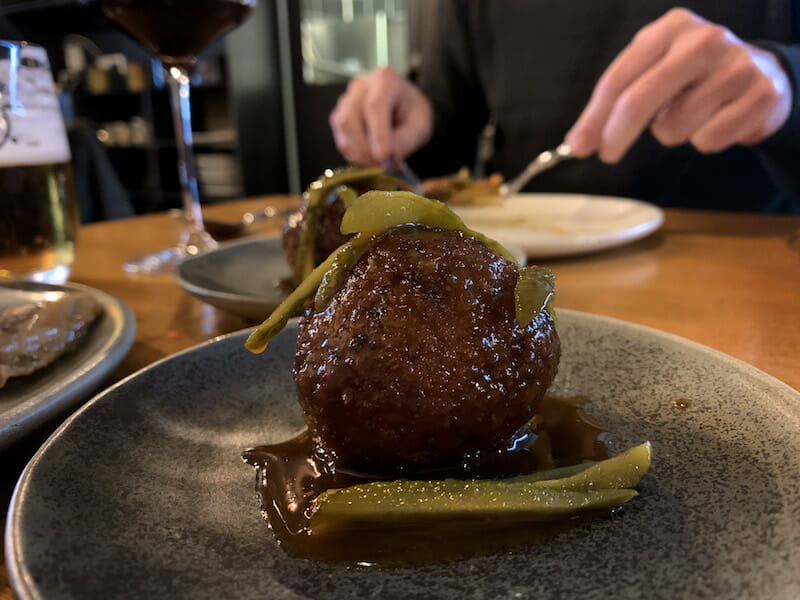 One of our favorites was the seafood salad, a small bowl of clams, razor clams, mussels and the venerated percebes, or goose barnacles, a distinctive symbol of the Iberian Atlantic coast. These fruits of the sea were accentuated by radish, parsley vinaigrette and a spoonful of stracciatella cheese, which immediately called to mind cows grazing on fresh grass along the coast, with the force of the ocean roaring around, a common landscape in A Coruña, Javier’s hometown. This dish was an edible journey to northwest Spain.

We didn’t miss the opportunity to taste Maresme peas, a delicacy that’s only offered for a short time, right at the start of their season. In this case, the tender, tiny and sweet peas were grown by the sea, making them sweeter than usual. They were delicately served with sea urchin roe (uni) and fennel. Another immersive trip, although this time along the Mediterranean coast, north of Barcelona, served on a small plate.

The dessert was one their classics, a contemporary and creamy take on tarta de Santiago (Santiago’s Cake, a traditional almond cake from Galicia), made with Marcona almonds from the old-school Barcelona gourmet shop Casa Gispert, where they are toasted and salted in house. As Javier says, this is a cook’s dessert (not that of a pastry chef), sweet but with a kick of saltiness.

At least we can still travel without crossing municipal limits thanks to restaurants like Taberna Noroeste, which is learning how to be bigger and better in an intensely difficult period. When the worst has passed, we have no doubt that this culinary project, born into challenging circumstances, will go through a growth spurt.

Barcelona | By Paula Mourenza
By Paula Mourenza
BarcelonaA former village annexed to Barcelona in 1897, the city’s Sant Andreu district was a center of industrial development throughout the 20th century, becoming home to a large population of factory workers. Today, it is a quiet residential area that feels caught between its Catalan village roots and industrial past, with buildings being renovated and…
Taberna Noroeste
Carrer de Radas, 67, Poble Sec
Tel. +34 931 15 09 11
Hours: Thurs.-Mon. 1:15-3pm & 3:15-5pm & 7:30-9:15pm [Currently Thurs.-Tues. 1-3:30pm]