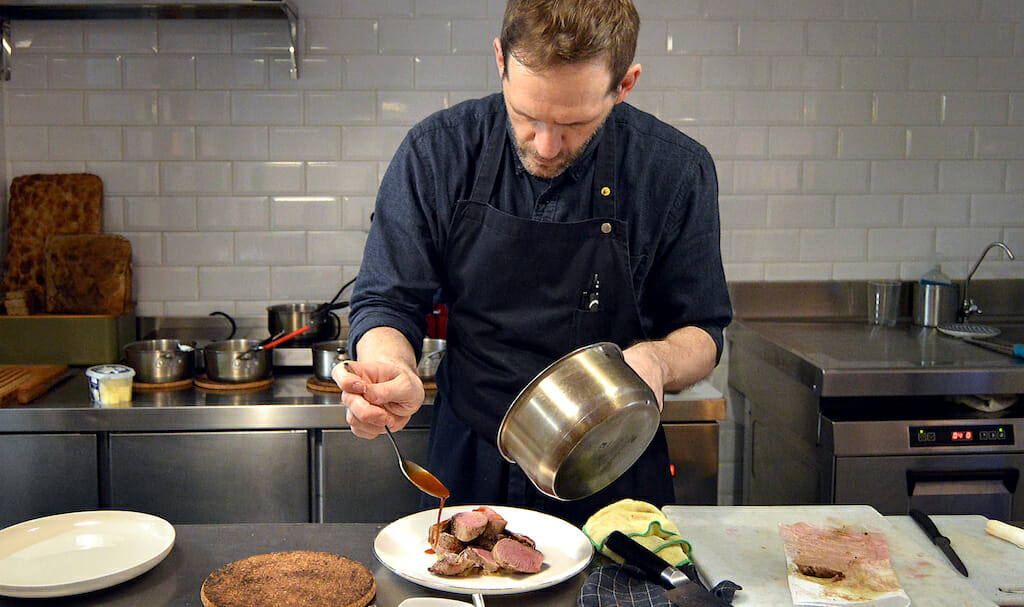 Olivos Comida y Vinos is like an independent movie playing at a small cinema on a quiet street in Sants, a neighborhood just outside of Barcelona’s center. It leaves you with the impression of having had an unexpected, intimate connection with something personal and precious. They don’t have customers – they have fans.

Decorated with plants and flowers in a comfortable setting of simple, natural materials, Olivos is full of thoughtful details (enough space between tables, no table cloths for green eating) and super-friendly service. The exquisite food follows a sustainable “slow food” philosophy, where products should be local and obtained in both a clean and ethical way, and everything is cooked with a highly professional hand. In Barcelona, where mainstream culinary trends, big hospitality groups and huge investments in interiors and PR are frequently the rule that moves the masses, the independent, honest spirit at Olivos is a treasure. 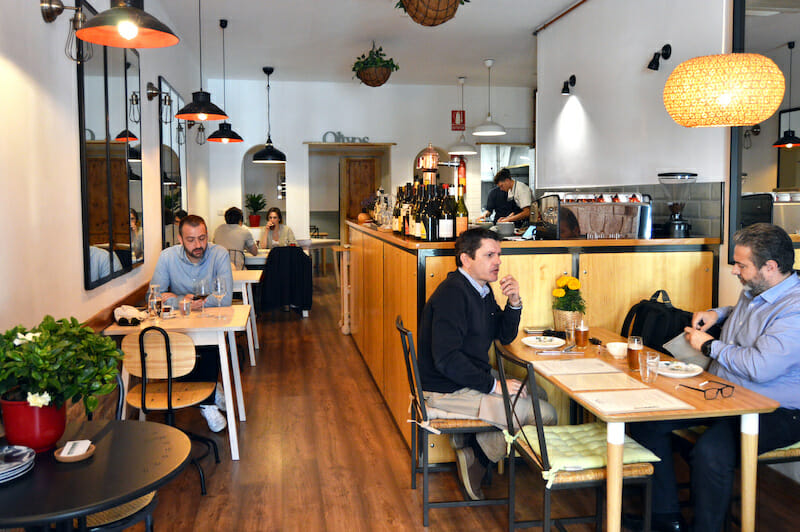 The architects of this accomplishment are the chef Ezequiel Devoto, born in Argentina to Italian parents, and his wife María Escobar, who hails from Spain’s Andalucía region. Devoto has a long career of excellence behind him, having worked in top restaurants first in Buenos Aires and then all over Europe, including culinary hotspot Copenhagen, where he was employed in the kitchen of the Michelin starred Relae.

It was during this period that the idea for Olivos Comida y Vinos was actually born. One day, hoping to eat at the celebrated Noma but finding it unexpectedly closed, Devoto sat down at Restaurant 108, another Michelin-star winner nearby. An open, industrial loft with a more casual atmosphere, 108’s chefs were personally serving their food to the table – no luxuries, no cadres of waiters. “This is what I want,” Devoto thought about the simple staging in an open, simple space that left all the star power to the food. 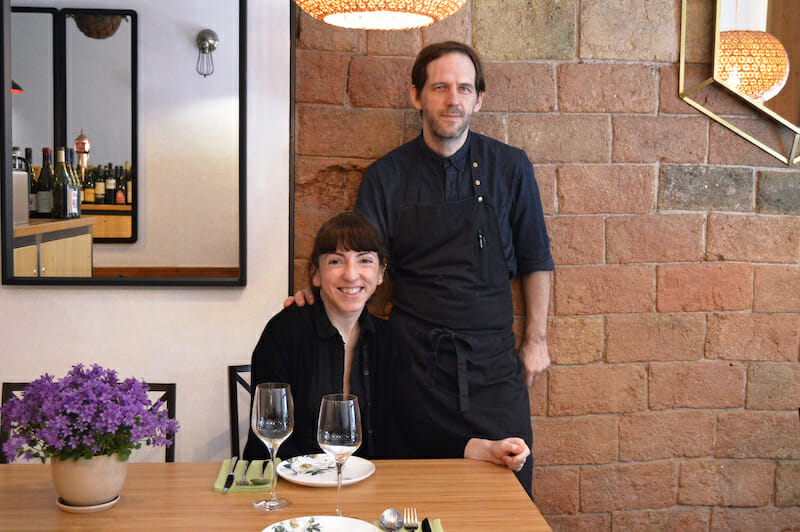 Before making it to Barcelona, the peripatetic Devoto went to cook at a restaurant in Formentera, one of Spain’s Balearic islands. It was here that he met María Escobar, who had left a career in audiovisual communications in Málaga to work in restaurants. Olivos Comida y Vinos, which they opened in 2017, is their first project together. After a couple of years in Sants, not far away from the train station, they are both proud of and grateful to a neighborhood that saw them grow, surrounded by other small restaurants like La Mundana and Sants es Crema. “We want a restaurant where you find a warm, kind ambiance, where you are not squeezed to other tables, without double shifts to make more numbers, where you are attended with a smile and moreover, where amazing food starts to arrive to the table with rich flavors, announcing complexity with fresh, seasonal, quality product … a restaurant with generosity,” Escobar says.

Olivos Comida y Vinos leaves you with the impression of having had an unexpected, intimate connection with something personal and precious.

Their cuisine concept is Mediterranean cuisine, dressed with influences from their own Italian and Andalusian backgrounds. But at its core, their food starts with Catalan heritage. They wanted to celebrate the richness of the local products that go from the sea to the mountains, and reinterpret all this tradition using their own creativity in dishes like their bacallá a l’all cremat, a baked codfish with potato mousseline and tomato with roasted garlic. Italian touches and recipes from Devoto’s personal stash are spread here and there, like the gnocchi that his grandmother used to make (very light, without egg) or the tiramisu from his mother (a delicate take, flat and creamy, served in a dish with a thin layer of biscuit and chocolate chips). From Escobar’s side, the menu inherits treasures from Málaga, like the Iberian pork specialty zurrapa (made from frayed pork meat and fat, similar to French rillettes, which you spread on bread), the sweet MR (Molino Real) Málaga wine or the rustic peasant egg cookie (a talismanic Andalucian item for Maria) that they use specifically for the tiramisu. 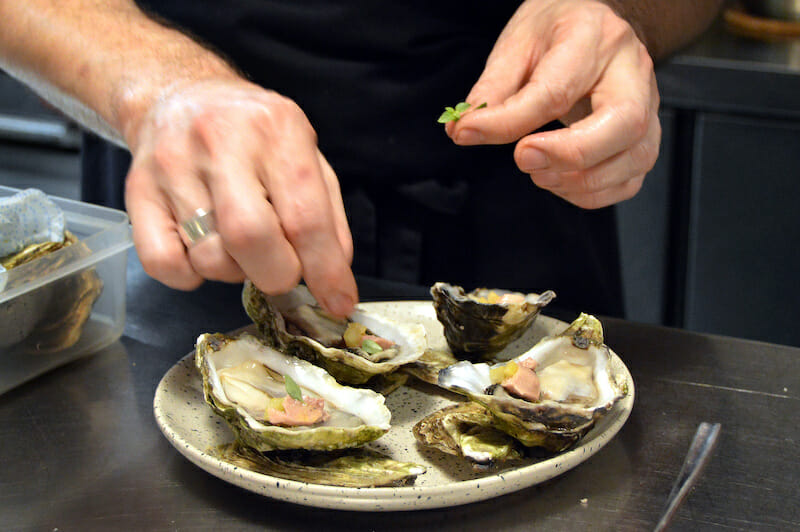 Despite the constant seasonal flexibility of the menu, a few dishes are sacred cows for the fans and faithful clients of the restaurant. There’s the arroz de pages, a succulent, rice dish, cooked al dente and served with mushrooms and squid in its ink and topped with an aioli made with capers, which gives a refreshing, intense taste to the whole dish. Another must is the croquets made with oxtail and an umami-rich sauce made of soy sauce, honey, mushrooms and Sherry vinegar. Then there’s the unforgettable roasted octopus with lemon, potatoes and Romescu sauce and then the grilled pig feet with a seasonal garnish and lightly smoked eggplant with Camembert cheese.

The succulent pluma ibérica, Iberian pork cut close to the loin, is delicately crispy on the outside and tender on the inside, full of flavor and juicy, and in perfect balance with the bed of smoked eggplant that Devoto decided would best accompany the dish based on the other plates ordered at the table. The team is constantly looking out for what customers could enjoy more, adapting and personalizing their creations and generating two directions of flow between the table and the kitchen. 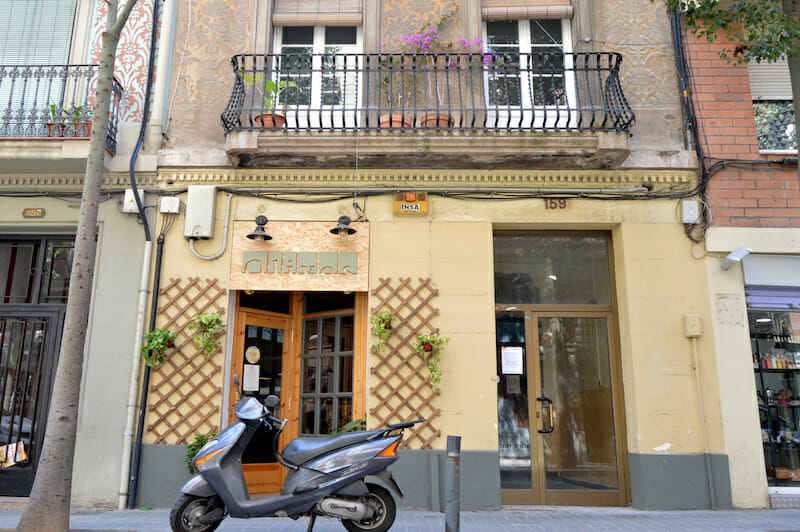 To complete it all, they bake their own bread daily, using a sourdough starter that Devoto brought from Paris 15 years ago. The bread is served with a tomato rub, a traditional Catalan touch. And we can’t forget the vinos on offer, a mix of natural and organic wines as well as more conventional reds, whites and rosés – something for every taste and every plate.

Olivos Comida y Vinos is full of discreet details that very often go unnoticed by diners, but that constantly hang in the air and around the tables, giving diners the sensation of being in inside something special and intimate. Fortunately, this is a show that goes on night after night.

This article was originally published on July 1, 2019. 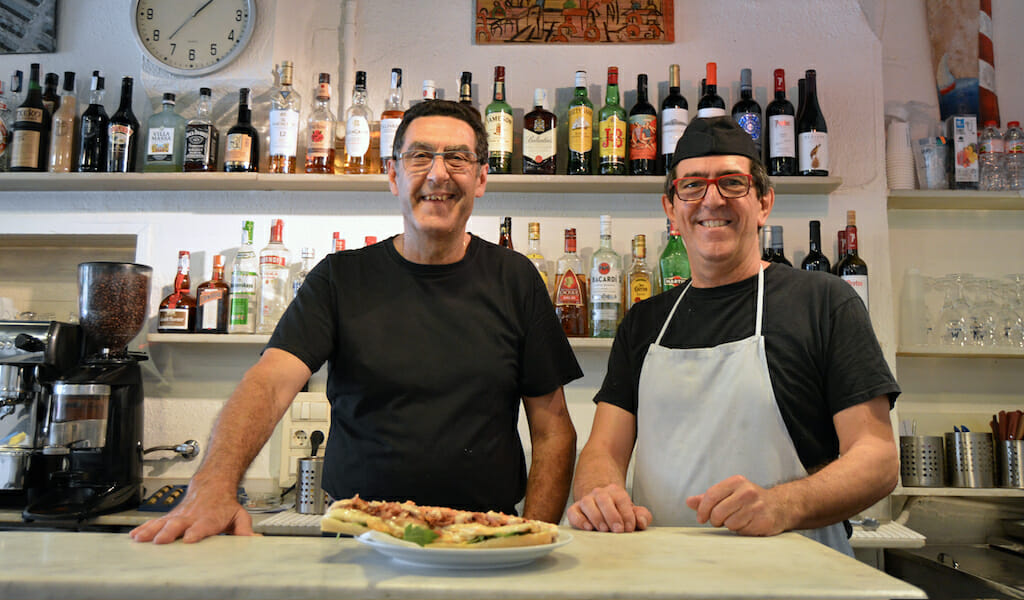 Barcelona | By Paula Mourenza
By Paula Mourenza
BarcelonaFor a century and a half, the building housing Guixot has taken on many personalities – though one thing has remained the same: It’s always housed some type of bar that also served food. Now a tapas bar celebrated for its sandwiches, brothers, partners and cheery owners Francisco and José Gutiérrez Murillo have been running… 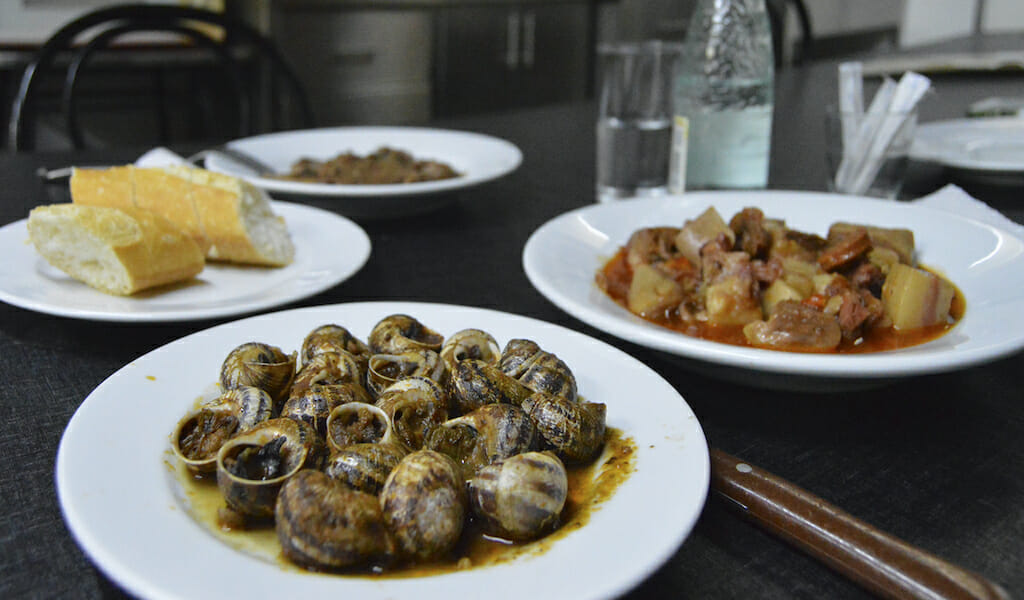