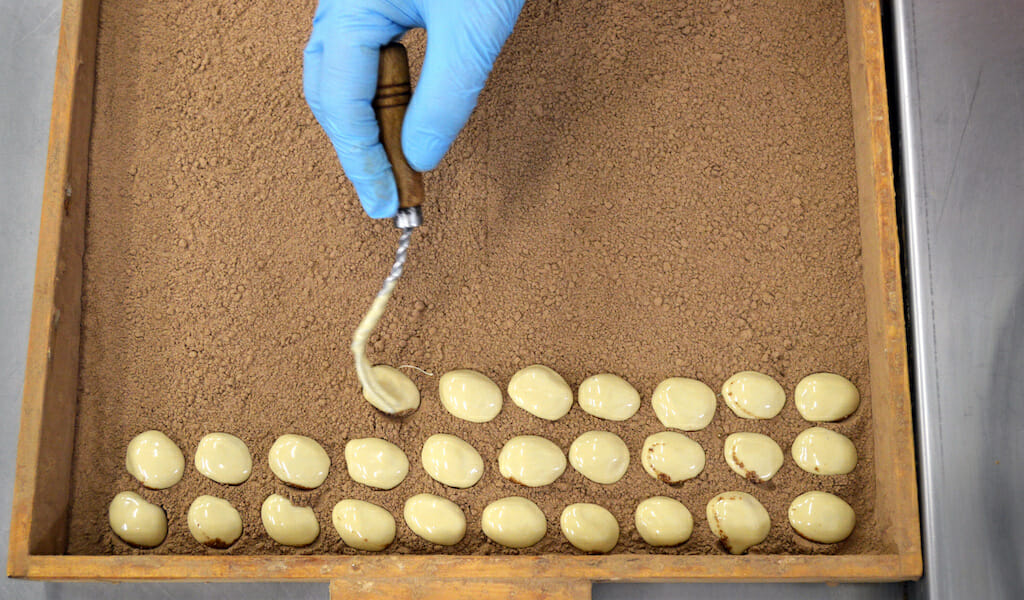 In 1949, when the patisserie that Josep Cudié had been working at as head pastry chef for a decade closed, his wife, Antonia Salleras, encouraged him to stop working for others and start working for himself. “Since you’re the creator of all these chocolates,” she said, “why don’t you just open your own business, making the chocolates and selling them to other patisseries?”

Fortunately, he took his wife’s advice. Today, Oriol Llopart Cudié, also a pastry chef, is the third generation to run the business and – more importantly – to produce Catànies, his grandfather’s invention. Candied almonds coated with a special praline and bitter cocoa powder, these brown pearls are now one of Catalonia’s most iconic candies. 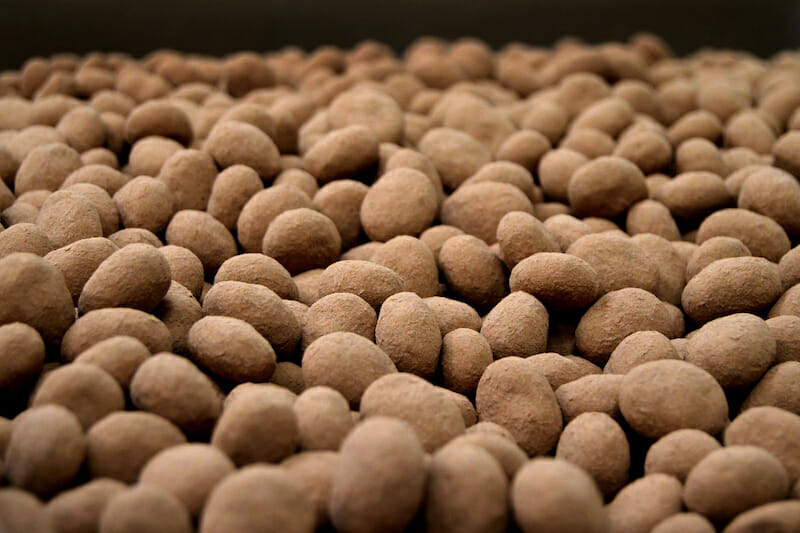 The homeland of the Cudié family, and Catànies, is Vilafranca del Penedès, the capital of the Alt Penedès wine region, which produces 95 percent of Spain’s cava, or sparkling wine. Located one hour from Barcelona, this area is also famed for its almond production: Many of the almond trees that dot the landscape are growing Marcona almonds, one of three indigenous Iberian varieties. Come February, their bare branches erupt in beautiful blossoms.

Josep used the incredible ingredients at his doorstep to create his remarkable little gems. He first started making chocolates in 1940, while working at Trens, a patisserie in Vilafranca owned by Joan Trens i Riba. The shop was located in an old building called Cal Catani, a reference to a former family member of the house who was originally from the Sicilian city of Catania. In the 50s, Mr. Trens died without any descendants to take over the business. So Josep, on the encouragement of his wife, opened a small obrador (sweets workshop) in the large ground-floor space beneath their home, where, together with a few employees, he produced his various chocolate creations to sell in bulk to Barcelona patisseries.

In the 90s, Oriol’s mother took the wheel, transforming the artisanal business into a small family factory and bringing it into the 21st century. She focused in on the production of Catànies, moving from bulk shipments to proper professional packaging, with a registered brand for the product and the Bombons Cudié business. 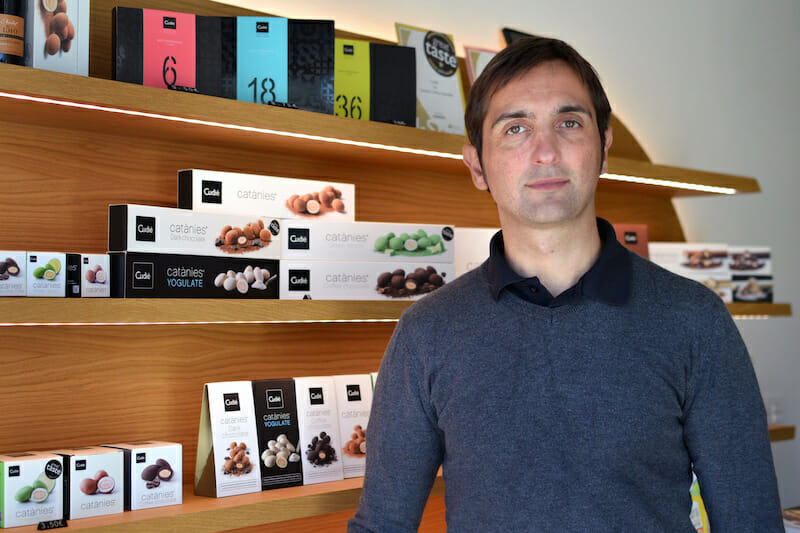 Oriol, already a professional pastry chef educated in Switzerland, came on board in 1995, when he began creating new Catànies flavors and other variations on the candy. His work in product development also extended to the brand’s other chocolates like their Mediterranean Tiles, Catànies nougat, and Macadamia walnut chocolates. In 2002, he moved to a management role, and the candy company has flourished under his leadership: Currently 100 tons of sweets are sold per year, both nationally and internationally, whereas in Josep’s day, annual production was somewhere between 250-500 kg.

As so often happens, the Catànies evolved over time. The current candy’s predecessor was a more humble sweet – Josep privately referred to it as “the potato” – of praline wrapped around caramelized sugar, which was then coated with a very bitter chocolate. Since “the potato” was not particularly successful, Josep decided to improve it in the 1940s by introducing a candied Marcona almond, almendra garrapiñada in Spanish, inside the praline. A new wonder, first called Cro-Crem, was created and saw immediate success. Trens’ clients and neighbors quickly christened them Catànies, after the name of the building where the patisserie was located, and the new name stuck.

Catànies is the center around which Cudié spins – even if it’s not the only product, it’s still the most iconic.

A classic Catània is basically a Marcona almond that has been candied, i.e. coated in browned, crunchy sugar, and then covered with a praline (Oriol also refers to it as “chocolate”) made of cocoa butter, almonds, hazelnuts, milk, sugar and an aromatic secret touch (which, according to Oriol, gives the candy its characteristic aroma). Finally, another coat of a high-quality cocoa powder. For the other variations, Cudié creates each one from scratch with a specifically adapted recipe: coffee beans from Africa are roasted in-house, and the yogurt is also made on the premises. Every praline or inner chocolate is also adapted to the final flavor.

Catànies is the center around which Cudié spins – even if it’s not the only product, it’s still the most iconic. The current original version is made according to the same exact recipe that Josep created in the 40s. Yet the candy has multiplied, thanks to the many variations Oriol has developed over the recent years: the coffee version, with its warm intensity; the “yogulate,” with a creamy and refreshing yogurt touch; the powerfully acidic green lemon version, the only fruity option for now; and the succulent dark chocolate ones, to name a few. There’s also a new Bio line that features all organic Catànies. 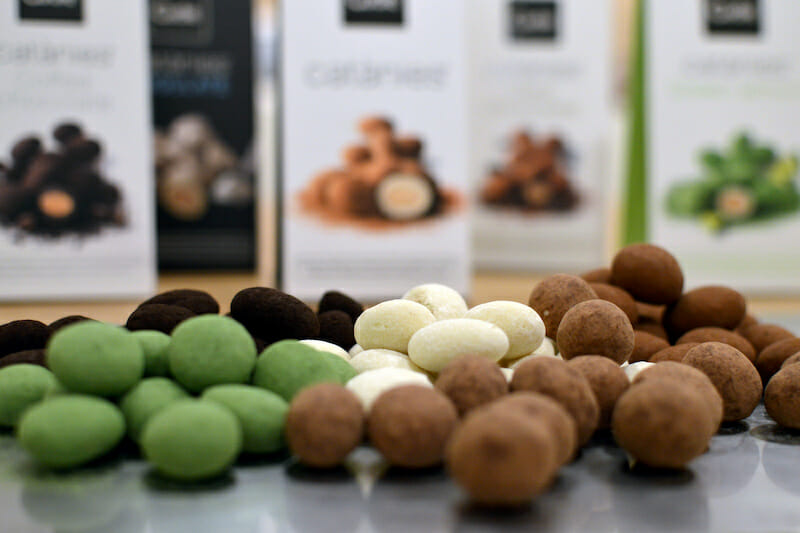 When Oriol was testing these new variations, his grandfather – retired and in his 90s –still somehow supervised the final results. “I brought a new test batch of the coffee and yogurt Catànies to my grandfather’s house,” he tells us. “He was watching the Tour de France, and I came in with a Tupperware full of these new Catànies. ‘Look,’ I told him, ‘this is what I’ve been working on lately.’ He tasted them and immediately said, ‘Put more of this and less of that.’ This guy! And of course he was right, after more than 70 years on the job he really knew what he was talking about!”

Oriol reveals to us that they are about to launch three new versions: chocolate with Himalaya salt, crema catalana (crême brûlee), and coconut. While the business is expanding, taste is still paramount. “My grandfather never used any kind of marketing strategy,” Oriol explains. “He thought that people should love the product when they first taste it, so much so that they immediately want another one. He would leave a sample and wait to see if the customer finishes it quickly.”

They always did. And they still do now.

In addition to Casa Ametller and El Corte Inglés, local chains that stock Catalan gourmet products, and the old traditional patisseries, where the candy can be purchased in bulk, here are some places to buy boxes of Cudié Catànies in Barcelona: La Grana, Idyllica, La Bombo, Pastisseria Mauri, Torrons I Bombons 1916, and Vila Viniteca.

This article was originally published on December 6, 2019. 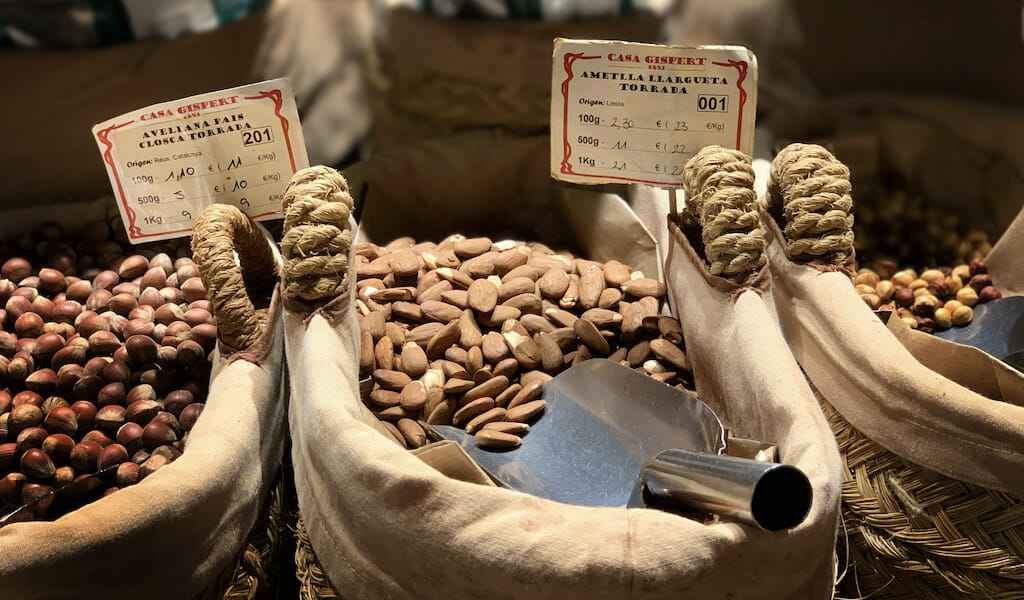 Barcelona | By Paula Mourenza
By Paula Mourenza
BarcelonaThe scent of wood slowly burning is imbued with a sense of home and refuge: It calls to mind the fireplace around which people used to congregate at the end of the day, or the barbecues and grills that still commonly serve as gathering points. This feeling can also be concentrated in bites of food,…

Add to favorites
Catànies in Barcelona