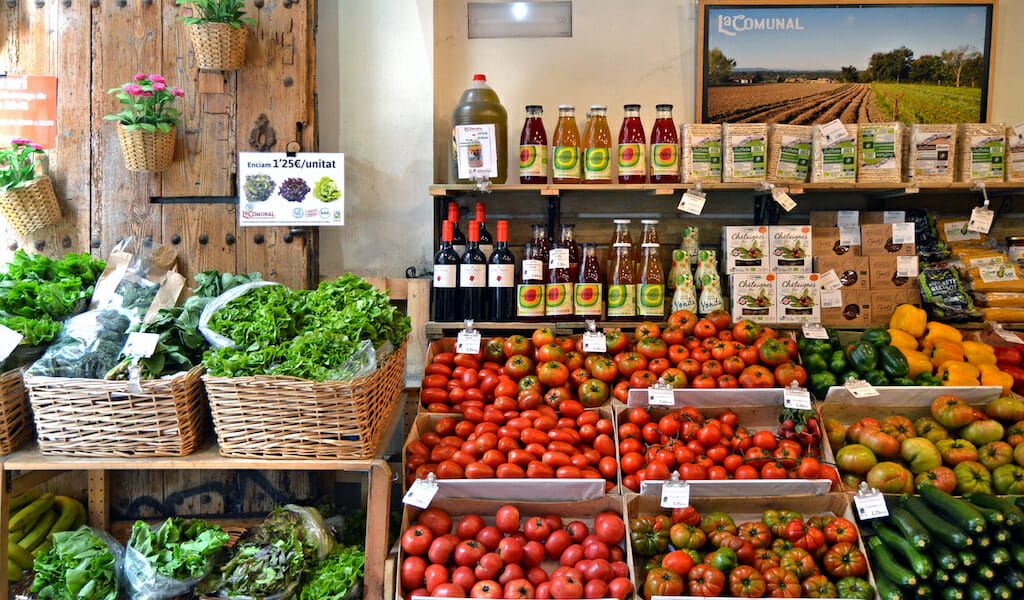 A tomato is a tomato, or that’s what it might seem like to grocery shoppers in Barcelona. But Karim, who currently oversees two hectares of organic gardens in Campíns, an area northeast of Barcelona located at the foot of the Montseny mountain range, knows otherwise.

“We don’t know what we eat,” he tells us. “I used to work at other places dedicated to industrial farming, and they added a powder to tomatoes to force them to mature in a couple of days. There was a storeroom where we had to put on a special protection suit before entering [the greenhouses] because the tomatoes were sprayed with harmful products that could go directly to our bones.”

Now that he works with La Comunal, an independent project devoted to growing and distributing organic produce in Barcelona, Karim doesn’t need to don a special protection suit to tend the land. In fact, his whole family eats the organic produce he grows, as well as the eggs from the few chickens that roam the farm – the animals are part of the clean ecosystem and sustainable agricultural practices that are at the core of La Comunal’s mission. 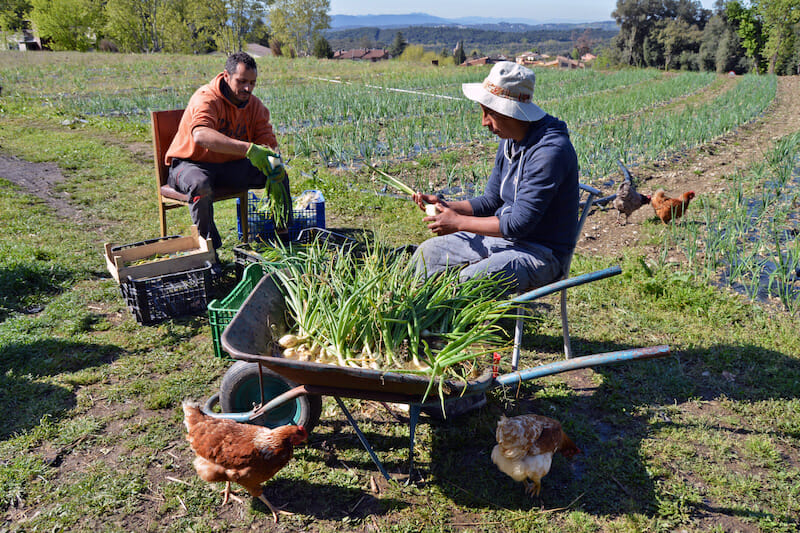 Run by Carles Devera, Daniel Reixac and Esteve Colomer, La Comunal sells their organic produce at their two shops in Barcelona – one in Gràcia and the other in Poblenou – and to other distributors in the city. And everything produced on their land in Campíns is certified by CCPAE (Consell Català de la Producció Agrària Ecològica), the Catalan Council of Organic Agriculture Production.

The project got its start when Esteve, a former chemist, decided to swap the lab for the fields of Campíns and do what he loved most: cultivate the land without the use of chemicals like pesticides or fertilizers.

To create a functional business, he realized that he needed to build a team; he brought on Carles to oversee management and coordination and Daniel to supervise distribution and communications, leaving Esteve in charge of the general management of the project. He also hired more expert hands like Karim and Guido to take care of the land.

Over the last five years, the amount of land dedicated to organic cultivation in Catalonia has doubled in size, following consumers’ increasing desire, both in Spain and abroad, to buy organic – no longer a fringe fad, even large supermarket chains have taken up the organic banner. 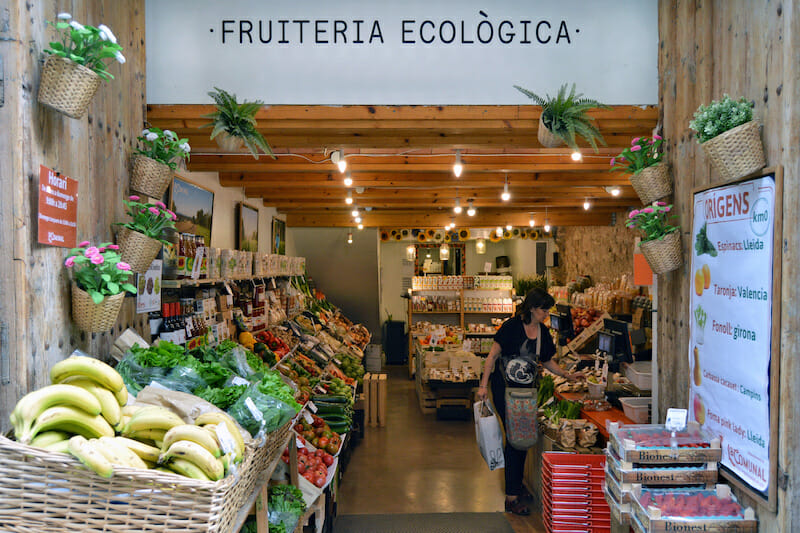 But despite the growing popularity of organic produce, maintaining a small neighborhood organic shop like La Comunal is a challenge, one that would best many independent entrepreneurs. “In Catalonia a lot of people want to develop a project like this, but many of them fail because there is not any kind of institutional incentive or help and it is very hard,” Carles explains. “You need to have a full knowledge of everything that is necessary, from cultivation to commercialization.”

La Comunal seems to have figured out an approach that works for them. Variety and quality are necessary to keep the project alive, so they also sell fruits and vegetables from other certified producers.

For instance, they offer the nightshades – like tomatoes – that are fundamental to the Catalan culinary tradition year round: in summer, they are grown locally, and in winter, they come from organic greenhouses in the southern Spanish region of Andalucía. From France, they import some sophisticated multicolored carrots and other tubers like Jerusalem artichokes and wasabi root, which are only available from specialized vendors. Depending on the season, around 45 percent of the shops’ products are Catalan, a good portion of which comes from their own fields.

Spring in Catalonia sees a mix of the last winter holdouts, like squash and artichokes, and warm weather early birds, like peas and green asparagus. The two La Comunal shops really explode with color in the summer, though, with local fruits and greens that are perfect for refreshing salads, smoothies and gazpachos.

In any case, the seasons have been changing lately: while summers are becoming drier and longer, spring has been making an earlier and earlier start, showing up with a warm blast followed by a period of cold, storms or even a late snow. Karim tells us that last year they had tomatoes from July to December. These days, he is most worried about some possible hail destroying the tender sprouts that have pushed through the earth. “If this cold weather stops in the next days, these shoots will grow happily,” he says. So much is at stake, and so little is in their control. 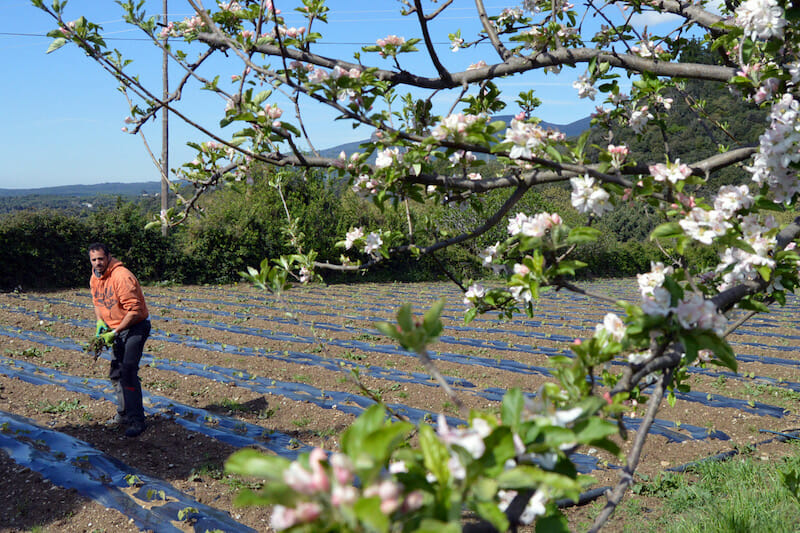 At the moment, strawberries, tomatoes and peppers from the south can be found at the shops, while the La Comunal land in Campíns is currently producing beautiful heads of lettuce, aromatic spring onions, tender green beans (which are in high demand) and the last of the chard and curly cabbage, which will soon been replaced in the fields with the first tomato crops.

The La Comunal fields are also dotted with small plants that will later blossom into fava beans, peas, zucchinis and cucumbers, assuming they can withstand the strong rains. All of them are watered directly using a stream that comes directly from the Montseny range – clean, pure and free of any chemicals, just as Esteve wanted when he made the jump from lab to land.