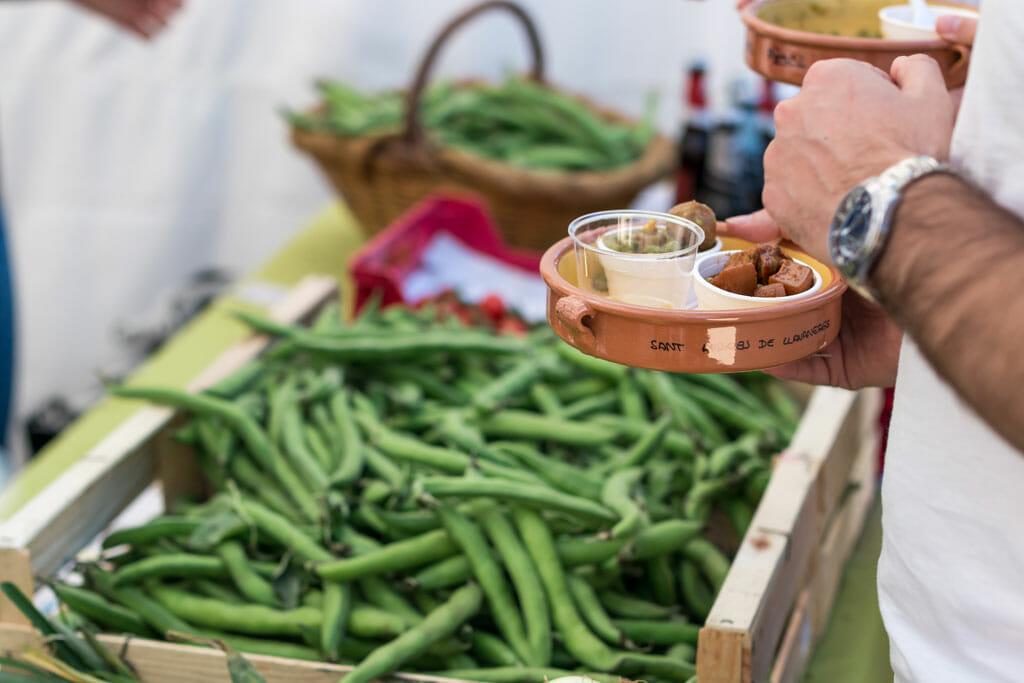 “People know about our peas all over the world!” Marc Bertrán exclaimed as he stood, arms crossed, behind a folding table laden with jars of cooked green peas, stacks of pamphlets and a big crock of silky pea hummus with a bowl of crackers, inviting passersby to enjoy a taste of three generations’ worth of dedication.

“In the 1950s,” Bertran told us proudly, “our town’s famous dish, Pèsols ofegats a l’estil de Llavaneres” – Peas stewed in the style of Llavaneres – “was featured on the menu at Maxim’s restaurant in Paris.” Mr. Bertran knows his peas; he runs Horta Marcò, a three-hectare farm in Sant Andreu de Llavaneres that has been growing these edible green pearls, plus artichokes, tomatoes and green onions known as calçots since his great-grandfather founded the family business in 1932.

Sant Andreu de Llavaneres, a 15-minute drive up the coast from Barcelona in the area of Maresme, is home to some of the sweetest, most tender peas in the world. Though the region is too small to have a denomination of origin designation, the peas of the Maresme are a product protected under the marca de garantía (guaranteed brand) label. Come spring, markets, homes, and restaurants around Catalonia overflow with these tiny green gems, and a portion of the crop is even sent abroad to eager chefs in France and beyond.

Multiple varieties of peas are cultivated in this seaside, agricultural hamlet, but the best – the most prized and promoted – is the pèsol garrofal. The Garrofal varietal thrives in climates where the temperature never dips below -1°C (30.2°F) in winter or rises above 20°C (68°F) in the spring, when it is time for the harvest. There are very few regions in Spain that support these meteorological requirements, making the Maresme the rare, ideal place for these delicate peas to thrive.

In the 1940s, a woman named Petra Lafarga was the first to bring her hometown’s unique product into the limelight. She began buying local peas and promoting their quality through delicious dishes on the menu of her eponymous restaurant. Restaurant Petra in Sant Andreu de Llavaneres (since closed) had various preparations of Garrofal peas on the menu, but the most famous was the dish that is now known as “Llavaneres-style peas,” a simple but flavorful stew of peas simmered with rich pork belly, young garlic and fresh tomato, with white sausage (botifarra blanca) and blood sausage (botifarra negre) as garnish. 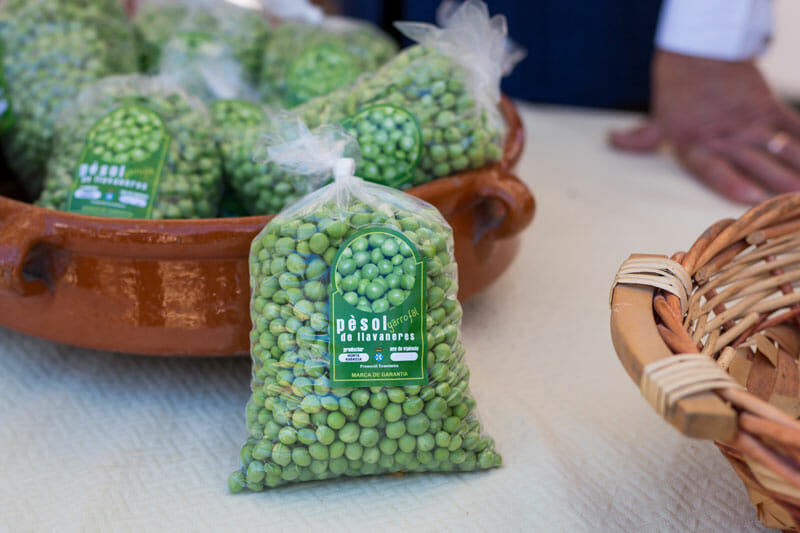 Every April, at the Festa del Pèsol de Llavaneres (Llavaneres Pea Festival), the entire town convenes to enjoy all things peas, from hearty stews and soups to delicate mousses and dips – even ice cream! 2016 marked the 17th annual Llavaneres Pea Festival, and Marc Bertrán has been here since the beginning, though at the start he represented not his own farm, but the Llavaneres farmers’ cooperative. The festivities are mainly contained to the small Parc de Ca l’Alfaro at the center of town, where 4,000 attendees enjoy a weekend of music, food and sunshine. The main event is the Sunday afternoon tasting, and this year, over 200 tasting tickets were sold, adding up to more than 100 kilograms of peas. Entry to the festival area was free, and for a €5 tasting ticket, pea-lovers received two modest portions of pea dishes of their choosing, plus a glass of wine and a sweet, creamy, flaky square of Coca de Llavaneres to round out the meal.

The Coca de Llavaneres was invented in 1955 by a Mr. Gaspar Sala i Ros of Pastisseria Sala, a local pastry shop and bakery that’s been in business for nearly 300 years. To this day, the Sala family continues to carry the torch of their famous patriarch, selling countless portions of this popular dessert year-round. Similar to other Catalan cocas (flat breads), the Coca de Llavaneres is a tender, sweet treat made from layers of puff pastry stuffed with pastry cream and studded on the outside with toasted pine nuts and coarse sugar crystals.

“There’s no secret to how (our family) makes the coca,” Fatima Sala Cabot told us as she and her children handed out portions of their famous family specialty. “We just use the best ingredients possible – fresh, local eggs and local pine nuts – and we always make the cocas daily so they are never soggy or stale.” According to Fatima, the peas of Llavaneres aren’t the only local gastronomic treasure to have earned recognition north of the border. “Maxim’s [of Paris] also featured Coca de Llavaneres on their dessert menu.”

At the Festa del Pèsol, in addition to the typical stew, local restaurants spent the day ladling heaps of pea purée, cuttlefish and pea soup and callos (tripe stew) into the little tasting cups and ceramic cassola souvenirs (included in the ticket price) of festival-goers. Local wine from the nearby region of Alella flowed in abundance, and market stands sold all the fresh ingredients needed to make your own pot of pèsols at home.

Being surrounded by peas isn’t unusual for Marc Bertrán. He confessed to us that his favorite means of preparing his famous peas is not the typical stew that’s ubiquitous at the festival, but instead the truita de pèsols (pea omelette), a relative of the classic truita de patates (potato and egg omelette). Instead of potatoes, one uses peas that have been heated in a dry pan with just a drop of olive oil, allowing them to release their natural liquid and lightly steam. You mix the peas with eggs and proceed to make a classic truita on the stove top. 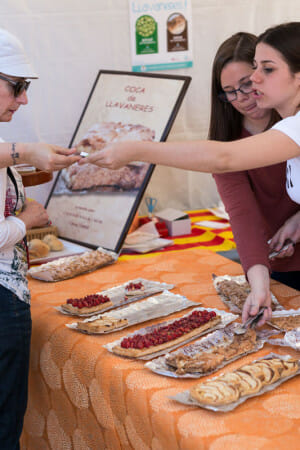 The Pea Festival only lasts two days, but during the entire month of April, locals and visitors alike can enjoy the town’s green bounty via the Mostra Gastronòmica del Pèsol (Pea Showcases), a program in which many local restaurants participate. Throughout the month, select establishments offer diners a menu the revolves around the Garrofal peas and the Coca de Llavaneres, with dishes such as Pèsols amb pop i llagostins (Peas with octopus and langoustines) and Pèsols amb sèpia (peas with cuttlefish) at restaurant Rotisseria Ca l’Arnau and Amanida de Pèsol Confitats amb Peus de Porc i Tòfona Negra (Salad of confited peas with pig’s trotters and black truffle) at restaurant Can Jaume.

All told, the Festa del Pèsol is not a huge affair, but the small-town spirit was on full display as friends and families enjoyed the fruits of their own soil on a sunny April day, when the last hints of winter winds just barely lingered in the air.

For a day trip from Barcelona, the Pea Festival is a enjoyable, affordable excursion that is sure to give visitors a new perspective on the important role that gastronomic festivals play in Catalan life. If you plan to go next April, Sunday is the best day to visit the Festa del Pèsol, but don’t show up after 1pm, as lines will be long and the food may very well run out not long after. Once you’ve had your fill, walk down for about 30 minutes to the seashore (or jump on the local bus) and soak up some sun on the beach before catching the train back to Barcelona. 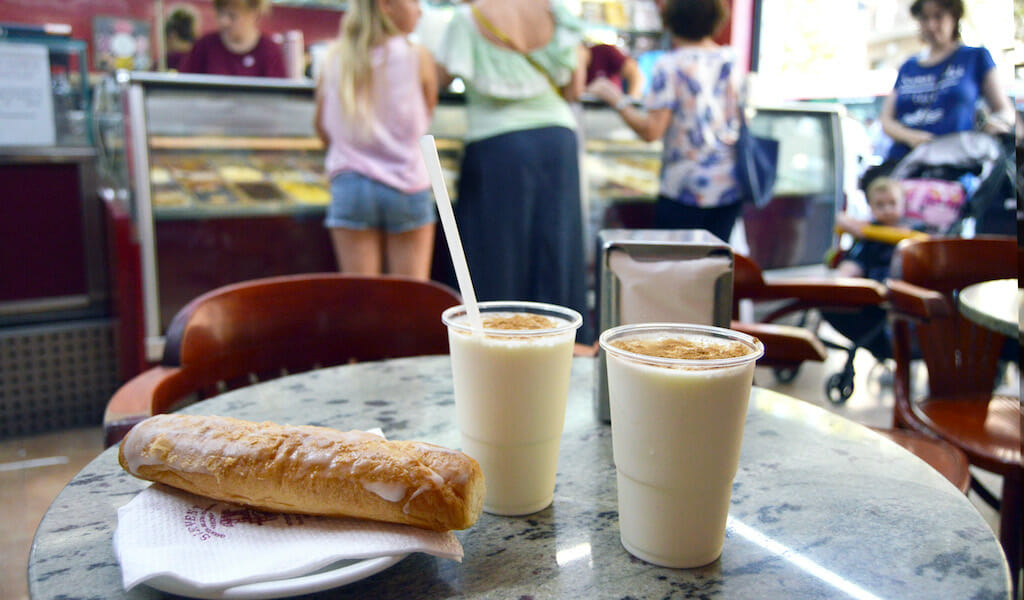 Barcelona | By Paula Mourenza
By Paula Mourenza
BarcelonaFor some inexplicable reason, leche merengada, or meringue milk, a traditional Spanish summer drink, has fallen out of favor over the past few decades – industrial ice creams and sodas, with their multicolored flavors, bubbles and fantasy frozen shapes, have seduced local palates, making this monochrome drink pale in comparison. Well, we say that it’s…