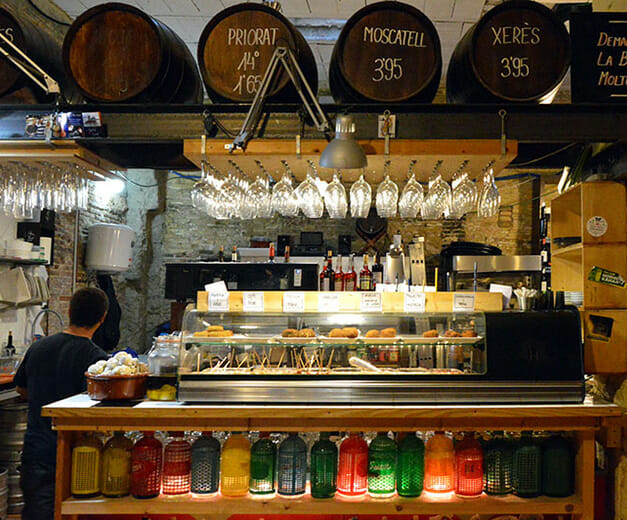 For more than a year, we’ve been trying to find a way to approach the mammoth subject of Spanish wine with a suitable culinary activity. Barcelona has a sophisticated wine scene representing the best of Catalonia and all of Spain. In sober rooms, we attended tastings that were a bit too academic for our taste. We visited new-age wine bars with a list limited to Catalan bio/organic wines and nothing else. In Barcelona’s many wine shops, we sampled when we could and shopped for bottles, as we might in any international city. During this research, we got up close and personal with what was in the glass but often felt disconnected from the local culture of drinking wine. So we searched around for places where it might be a bit more accessible: in the backstreets (where else?). Perhaps not surprisingly, we found ourselves in bodegas.

A bodega, in the Barcelonan sense of the word, can be a corner store or a corner bar, or sometimes even a wine cellar with a small kitchen serving refined riffs on traditional Spanish dishes. But most of all, it is the beating heart of the neighborhood. Wine barrels, chalk-marked with their contents’ region of origin, line the walls. Neighbors come in and fill a jug to take home, pausing for a game of cards, a drink and a bite to eat and some banter.

For our newest Barcelona walk, “Bodega: Barcelona Barrio Tradition, in Bulk,” we surveyed more than a dozen bodegas all over the city, from high-end to down-and-out, and learned a lot about the special place that the bodega occupies in the social life of the city. Wine is a celebration of life in Barcelona and the bodega is the spring from which it flows. We tasted some unforgettable wines and – truth be told – some plonk along the way, but the spirit of all of these establishments was consistent, inviting us in for a glass and back for another.

In this tour we’ve put together a selection of bodega experiences that thrust us into the life of a neighborhood to sample the best of the Spanish and Catalan barrel, eat the delicious tapas that were designed for such occasions and come away, if for a moment, with a sense of what it is to be a regular. On this walk, as we travel along Barcelona’s urban wine route, we’ll be among those regulars, eating and drinking our way through some of the city’s most iconic bodegas.

There is plenty of food to call this tour a long, well-lubricated lunch and enough drinks to consider it an extended happy hour. Better yet, we like to call it an invitation into the unique culture of the Barcelona bodega and the barrios that keep this tradition alive.

You can read the full description of the tour here.

By
Culinary Backstreets
, photos by
Paula Mourenza and Ian Walton