In Spain, conservas, or foods preserved in cans and jars, are not simply a matter of economic survival or a source of basic nutrition for students, hikers, military recruits and the like. Rather, the tradition of conservas more resembles that of keeping one’s most beautiful jewelry locked safe in a strongbox, to be brought out only on special occasions like Christmas, birthdays or the victory of a favorite football team. There’s nothing better than some delicate canned cockles to lavish on your parents-in-law before a holiday meal!

It was a Frenchman named Nicolas Appert who invented the technique of canning around the beginning of the 19th century, thus earning him a 12,000-franc prize from Napoleon for having found a way to keep the French army alive and well-fed during its long war campaigns. After being heated and hermetically sealed in jars, foods were now not only transportable but retained all their nutrients. Today, however, Spanish conservas are no mere soldier’s grub but gourmet food products where every ingredient matters. Variables such as the kind and quality of salt, sugar, oil and/or vinegar used in the canning process, the season and locale where the creature has been caught or harvested, the cut or part, the size or the number of pieces in the tin, and even the amount of time the product has aged, can all affect the taste and texture of conservas – which, like wine in a wooden barrel, will often improve in flavor over time.

Some of the most valuable delicacies found in Spanish tins are sourced from the cold seas to the north. From the Bay of Biscay and the Atlantic come Cantabrian anchovies, top-quality tuna, razor clams, mackerel, sardines, mussels, octopus, squid and baby squid (chipirones), and small scallops (zamburiñas). The best Galician clams can reach €600 per kilo, or about €97 for a 20-piece tin; looking like shiny pearls of the ocean, these white clams are carefully preserved in salted water only. Another curious gem is Catalan 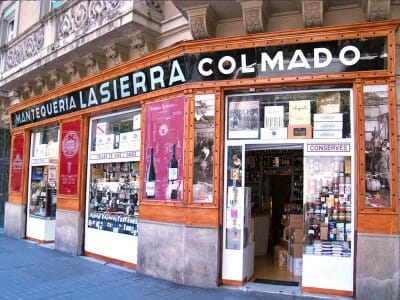 caviar, from sturgeon raised in the waters of the Pyrenees in the Vall d’Aran, which is prepared in the traditional Siberian way – i.e. fresh, not pasteurized – and sells for €77 for a 30-gram tin.

In Barcelona, these delicacies are often served with as hors d’oeuvres, accompanied by a good wine or, especially, vermouth. Without a doubt, one of the best places to enjoy the “vermouth hour” is the famous bodega Quimet i Quimet in El Poble Sec, where owner Quim Pérez has created hundreds of amazing tapas and montaditos with preserved ingredients. One of our favorites consists of a couple of Cantabrian anchovies caught in April (the best month to harvest anchovies with all their natural fat and taste) and by night (for optimum freshness), served with two apricot halves in syrup, a spoonful of Torta del Casar (a creamy cheese from Extremadura) and some drops of balsamic vinegar reduction. In this wonderful tapa, the sweet juice of the apricots contrasts with the salty anchovies, and the powerful flavor of the cheese makes the whole thing even more intense.

In Gràcia, Bodega Costa Brava is a small tavern in business more than 60 years, with a comfortingly local atmosphere. The current owner, Xavi Batlló, who also DJs in bars and clubs around the city, offers a great selection of foods from Espinaler, one of the best and most iconic brands of Catalan canned products. But for a fun evening of tapas accompanied by pop-rock music, we recommend trying one of the venue’s several lovely homemade conservas, which are the perfect pairing for any vermouth. These might include sardines prepared by the bodega’s chef, Joana, which are fried and then marinated in lemon and orange juice, with tomato and aromatic herbs. We also like the excellent anchovies, cleaned and preserved in olive oil by Xavi himself, and the boquerones en vinagre, unsalted fresh anchovies in vinegar. Also in Gràcia, Bodega Quimet (not to be confused with Quimet i Quimet above) is a typical neighborhood bodega that offers affordably priced tapas from the high-quality canned foods brand Lolin, in a pleasantly informal atmosphere.

For picking up conservas to enjoy at home, Barcelona’s beautiful, often historic, colmados – old-fashioned Catalan shops specializing in wines, liquors and conservas – are ideal. Possibly the best in town is Colmado Quilez on La Rambla de Catalunya. Established in 1908, the family-run patisserie on this spot was converted into a colmado in 1940 and later acquired by La Fuente group of wineries, which has left the shop’s classic ambiance unchanged. The walls are lined from floor to ceiling with a dazzling array of wines, mineral waters and gourmet foods from many different brands, including their own 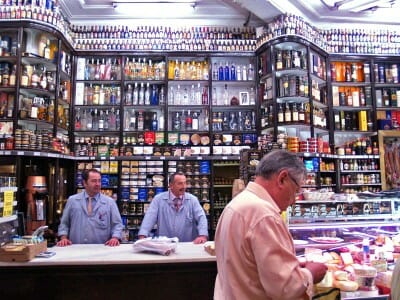 Colmado Quilez label. If you need guidance in choosing among the treasures like truffle foie gras, Kamchatka king crab and Cantabrian anchovies aged 180 days, just ask one of the men in the old-school blue smocks for a recommendation.

Not far from Quilez, also in the Eixample, Mantequeria Lasierra is a homey colmado dating back over 100 years, with a smaller selection of products, which makes choosing easier. In addition, owner Ramón Lasierra Peña, whose family has owned the venue since 1953 and who is also an expert sommelier, is always happy to help customers pick out something from the appealing food offerings and to suggest the best wine or cava pairings. The shop offers a handpicked selection of canned foods, craft cheeses, artisanal marmalades, cured meats, pickles and conserved vegetables, such as authentic pimientos del piquillo (roast peppers from Lodosa village in Aragon) and Catalan beans called mongetes del ganxet. Many of these gems are kept in beautiful glass jars that remind us of the preserved foods that our grandmothers made and stored for months, even years, in their larders. It’s time to open the strongbox.

Barcelona | By Paula Mourenza
By Paula Mourenza
BarcelonaQuick bite: On this bodega tour in Barcelona, we’ll follow the city’s urban wine route, mingling with regulars as we eat and drink our way through some of the city’s most iconic bodegas. A bodega can be a corner store or a corner bar, or sometimes even a wine cellar with a small kitchen serving…
Spanish Conservas in Barcelona