De toda la vida is a Spanish expression that basically means “It’s been around forever,” and it’s a sure thing that the locals in Barcelona’s Gràcia neighborhood will utter those words if you ask them about Bodega Quimet. Opened in the 1950s by the Quimet family, the bodega (not to be confused with Quimet i Quimet, a popular Barcelona tapas bar) was passed down from father to son until 2010, when the younger (but nonetheless old) Quimet retired and brothers Carlos and David Montero bought the venue.

David Montero had always worked as a cook and dreamed of owning his own place. However, after buying Quimet, instead of doing the renovations so typical of Barcelona bars that change hands (such as modernizing the furnishings or installing a huge flat-screen TV for showing fútbol matches), the Montero brothers made the somewhat unusual decision to keep everything, from the low prices to the décor, pretty much the same as it always had been.

This was obvious as soon as we walked through the door at Quimet. First the smell hit us: the pungent aroma of wooden table tops that had been sloshed with many a copa de vino throughout decades of use. The floor was covered with traditional Spanish tiles, which were well worn and in some cases worn through, and the walls were lined with several large, rustic wooden barrels, all with their contents written on them in chalk: jerez, oporto, moscatel and, of course, vermut (vermouth), the herbal-infused fortified wine that is such a part of Barcelona culture that the expression fer el vermut (literally translated as “do the vermouth”) is employed as a general way to express going out for drinks and tapas.

During the daytime, Quimet tends to cater more to the salt-and-pepper set (we’re talking hair here), with many an abuelo (grandpa) popping in during the early afternoon for a quick apéritif accompanied by the traditional banderilla, a variety of olives, artichoke hearts, piquillo peppers and sardines impaled on a long stick. Many of these regulars have been coming to Quimet since long before the Monteros took over, perhaps because they’re still serving the same house vermouth that was used by the Quimet family. And, just as in the old days, one can still order an entire bottle – complete with the traditional soda siphon – to go. Quimet also serves a number of local cervezas artesenales (craft beers) and a large variety of wines, most of them coming from small local wineries personally known by the Montero brothers. 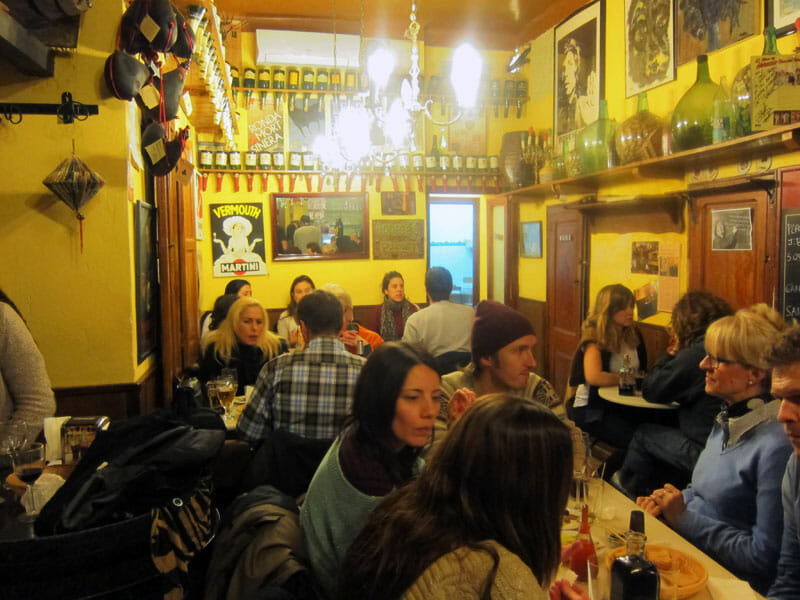 The first time we ventured into Quimet in the evening, we were taken aback by the change in ambience. The crowd was younger, and filled the small space with the loud chatter of good friends sharing stories while sipping drinks and munching tapas. Naturally, you can’t “fer el vermut” without tapas, and Quimet doesn’t disappoint in this respect either. The venue is well known for their high-quality embutidos (sausages) and tinned foods, particularly seafood. Conservas are a huge part of the culinary culture in Spain and, even in regions where fresh seafood is widely available, they form a significant part of the menu in any self-respecting tapas bar. Contrary to the common notion that canned food is modern processed food, the Spanish custom of conserving seafood such as anchovies, razor clams, sardines and tuna in tins is actually a tradition that goes back hundreds of years.

Being big fans of conservas, we ordered the “Variado Vermut del Quimet,” an array of tuna, cockles, razor clams, anchovies and olives accompanied by a basket of pan con tomate, or peasant bread rubbed with tomato (perfect for soaking up all those seafoody juices!). Everything on the plate was excellent but the atún (tuna) in particular was high-quality stuff – certainly no “chicken of the sea.” We also tried some tasty papas arrugás (“wrinkled potatoes”), a traditional dish from the Canary Islands that is prepared by cooking new potatoes in salted water until most of the water has been boiled away, leaving only wrinkled potatoes with salty crusts. The potatoes were served with a sumptuous mojo sauce made from olive oil, garlic and paprika and vinegar. As the evening wore on, we ordered more drinks and more plates of food: small dishes of chorizo sausage, sheep’s cheese from Cuenca and anchovies from Cantabria. The tables around us remained full. Nobody was in a hurry.

Quimet has always been a family business and that certainly hasn’t changed with the new owners. The wives of both the Montero brothers, as well as at least one or two cousins, are involved in running the bodega. It may be a bit early to wonder if there are any little Monteros being groomed for the next generation, but we can’t help but hope so. Like everyone else in Gràcia, we fully expect Quimet to always be de toda la vida.