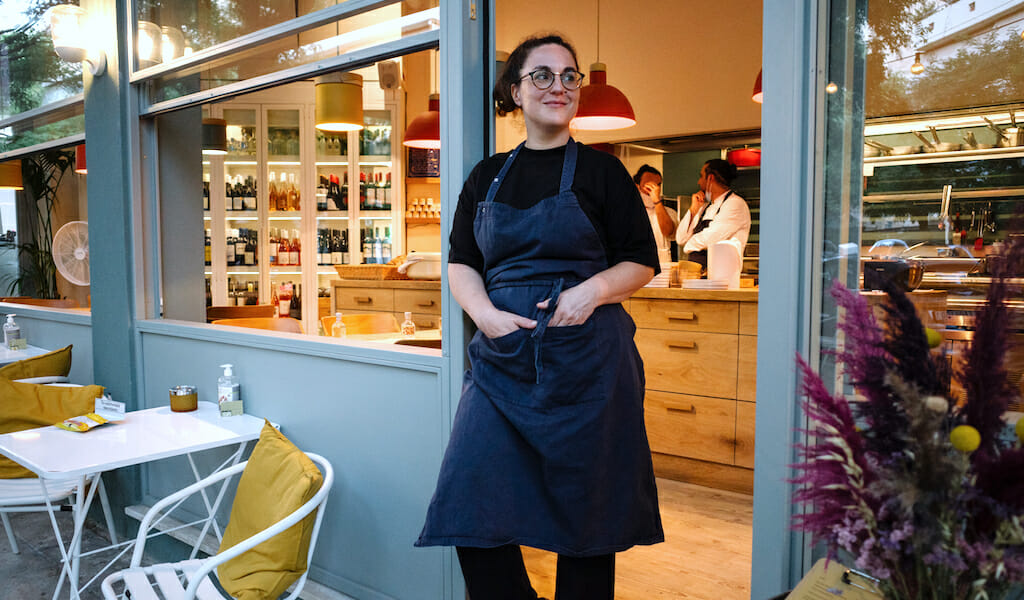 In the summer of 2020, a close friend of Ioli Vrychea and Panos Stogiannis – Athens restaurateurs with plans for a new spot – arrived at the Tainaron Blue Retreat on Greece’s southern Mani peninsula. He sat down at the hotel restaurant and, after quickly falling in love with the meal he’d been served, knew he had found the chef Ioli and Panos were looking for.

The friend was so enamored that he convinced the pair to make the drive down south to Mani to introduce them to the person who made the food, Stavriani Zervakakou, a 40-year-old chef with roots in Mani. The bond was instant. She quit her job at the resort and made the move to Athens.

Now she is composing menus that change daily and running the kitchen for Ioli and Panos at Annie – Fine Cooking, the restaurant they had been trying to get off the ground since before the pandemic struck. The pair met back in 2003 and, before this latest venture, opened two businesses together as a couple – Bartesera bar in downtown Athens and By the Glass, a popular wine bar and restaurant. Flash forward almost 20 years, and though Ioli and Panos have moved on from the restaurant and their relationship, they are still partners in every other way. “Panos is my family,” Ioli says simply. 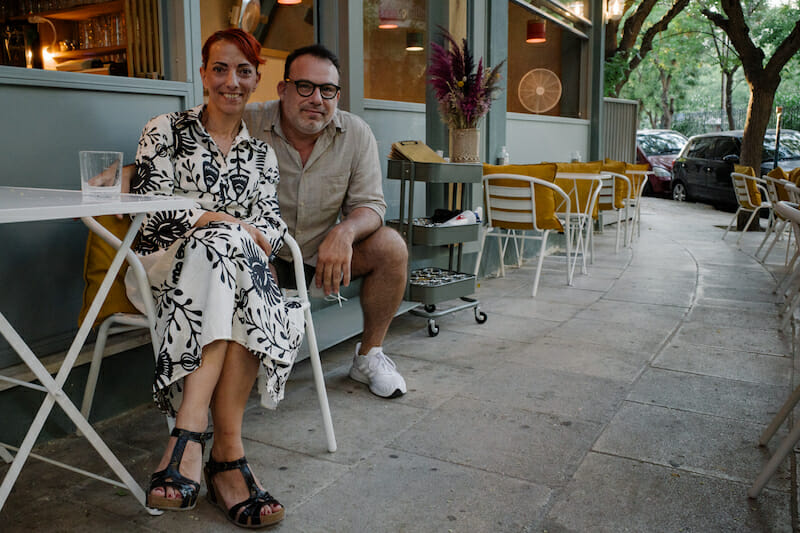 A familial sense of warmth and comfort (the restaurant is named after Ioli’s mother, a beloved cook and hostess) is what the two wanted to bring to their next endeavor, and they spent years looking for the right spot for Annie – Fine Cooking. They dreamed and schemed how to create a place that would be an extension of their kitchens: a warm, friendly environment; high quality ingredients sourced from Greece; and sustainable and respectful of the environment. Location was also important. “We didn’t want to open something in an already developed or popular area,” Ioli says. “We were looking for something in the outskirts, more residential or underdeveloped. Something with character – and significantly lower rent.” In January 2020, what they found was a small and casual space with an open kitchen in Neos Kosmos, a mostly residential neighborhood not far from central Athens.

However, about a month and half later, their plans were unexpectedly put on hold due to the pandemic. “We decided not to open yet. Give it some time. See what happens,” Ioli says. They waited through the first lockdown and gave themselves more time to organize – and to look for the right chef to take charge of their kitchen. That’s when their friend happened upon Stavriani’s cooking. 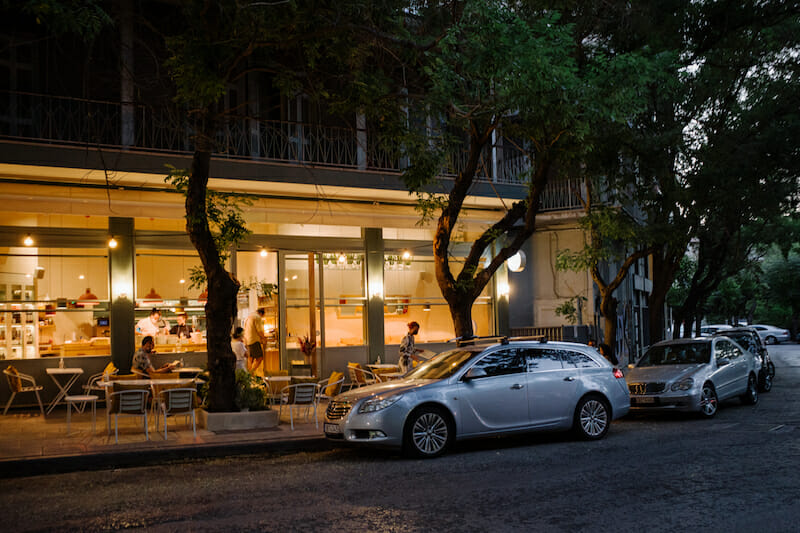 After waiting through Greece’s even-longer second round of lockdowns, the three launched Annie in earnest in May. For the time being, they are seating guests at the 11 tables outside on the pavement to avoid Covid restrictions on indoor dining. The warm and friendly Ioli serves and Panos is in charge of the wine and drinks list. And the menu is a feat in and of itself.

“We wanted to have a seasonal menu. We did not initially plan to change it daily! This was Stavriani’s idea. She had done it in the past. Truth is, it is quite difficult to manage, as we constantly need to source new ingredients and price the dishes every single day. But the guests love it!” Ioli says. Stavriani tells us that she likes change and improvisation, and the setup allows her to showcase her creative culinary skills. With the daily switch-ups, the menu remains quite small, but there’s plenty of variety. If only we had been able to try it all.

Ioli and Panos dreamed and schemed how to create a place that would be an extension of their kitchens: a warm, friendly environment; high quality ingredients sourced from Greece; and sustainable and respectful of the environment.

Stavriani is not new to those of us at Culinary Backstreets. Formerly a chef at Karaköy Gümrük in Istanbul, we have twice featured her in our First Stop series (both in Istanbul and Athens).

She officially grew up in Athens, but both of her parents come from Mani, where she would spend months of each year. During the harvest season, she would spend weekends gathering olives in her family’s groves. Her memories are vivid and sentimental: her grandfather’s kafenio in the village, gathering horta (greens) in the mountains with her aunts. Food is somehow connected to all of her memories. For us, it’s folks like Stavriani, impulsive and rich with emotion and love for what they do, who are the best cooks, whether professional or not. 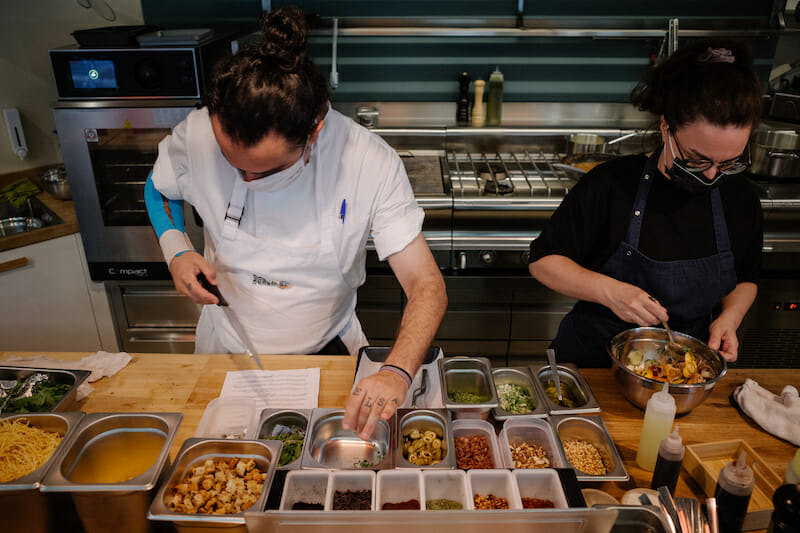 After finishing her studies in Balkan history in Florina, a town in northwestern Greece, in 2003, Stavriani took a trip to Istanbul and fell for the city. After working in various jobs, she enrolled in the Istanbul Culinary Institute in 2009. Soon after, she was cooking at a number of popular Istanbul restaurants, meeting great chefs and others in the industry and gaining training and knowledge. Turkey’s political upheaval pushed her to move back to Greece in 2016, where she landed the job of head chef at Mani’s Kyrimai Hotel restaurant. She stayed for two years – during which the restaurant was awarded 2018’s “best local cuisine” by the Historic Hotels of Europe (HHE).

Stavriani does most of the shopping herself at local markets. This is what determines the next day’s menu. She says her inspiration comes from the ingredients available, the local cuisine and her memories of Mani. She feels extremely grateful to have found Ioli and Panos, who she says give her the space to be free and work in a friendly, warm and creative environment. 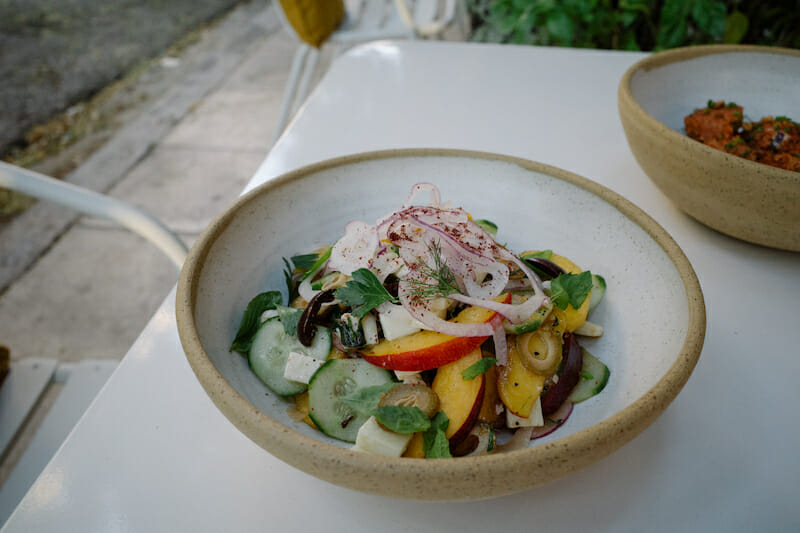 Even her homemade bread to start was impressively divine. In a country that has never been starved of good olive oil, the EVOO from Mani (Nomia Estates) is particularly good and is accompanied by fine Greek sea salt and pickled lupin beans (a yellow legume that is typically eaten as a meze in Mani). As far as the dishes at Annie are concerned, none disappoint. For those who want a little more guidance, Ioli will help with a plan of attack. One of our favorites was the vermicelli from northern Greece’s Yiannitsa. Cooked in a seafood broth with cuttlefish ink and served with steamed clams and sautéed langoustines, it was light and tasty.

A dish called “bread and fish” was much more than simply that. Boiled amaranth greens and thinly sliced syglino from Mani (a type of cured pork traditional in the south of the Peloponnese) on grilled sourdough bread was topped with caramelized and a grilled seabass fillet, with a side salad of samphire, onions and pickled loquats. Our dinner ended with a refreshing and pleasantly sour fresh lemon and rose sorbet. The wine list is also superb and, again, sourced strictly from small producers around Greece. The beer selection includes the Anastasiou microbrew from Chalandri, a northern suburb of Athens. 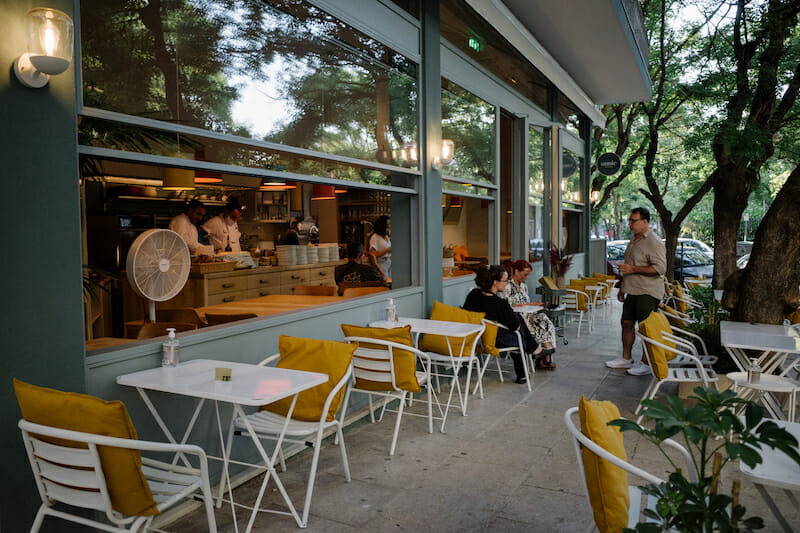 One thing we love about the menu is that they list many of the producers from whom they source their ingredients. “That’s how we add value, both to our dishes and the product,” Ioli explains. At the bottom of each menu is a salutation signed by all the members of the staff: “May your life be filled with beautiful moments around a table, and may today be one of those moments.” Indeed it was. 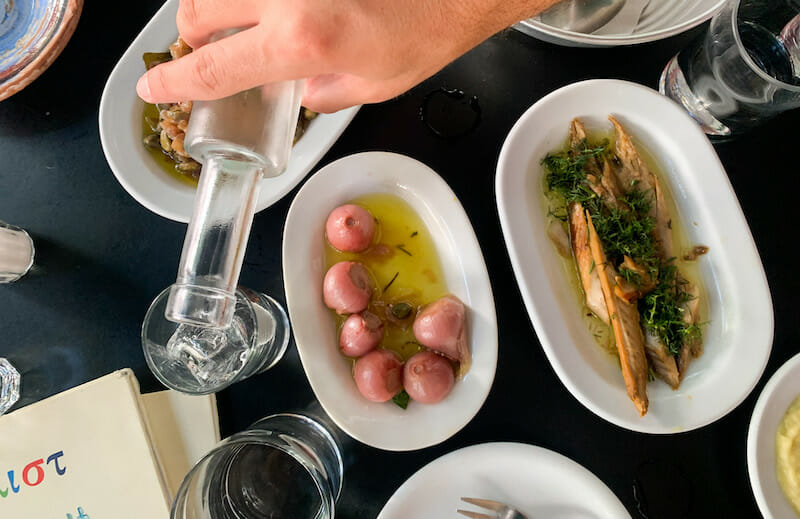 Athens | By Katherine Whittaker
By Katherine Whittaker
AthensEven though Athens is fairly close to the sea, there are times when we crave a quick island getaway – to taste the best tomato salads of the Cyclades, or one of the many pungent cheeses of Naxos, or real smoked apaki from Crete, but we don’t have the time (or resources) to venture out… 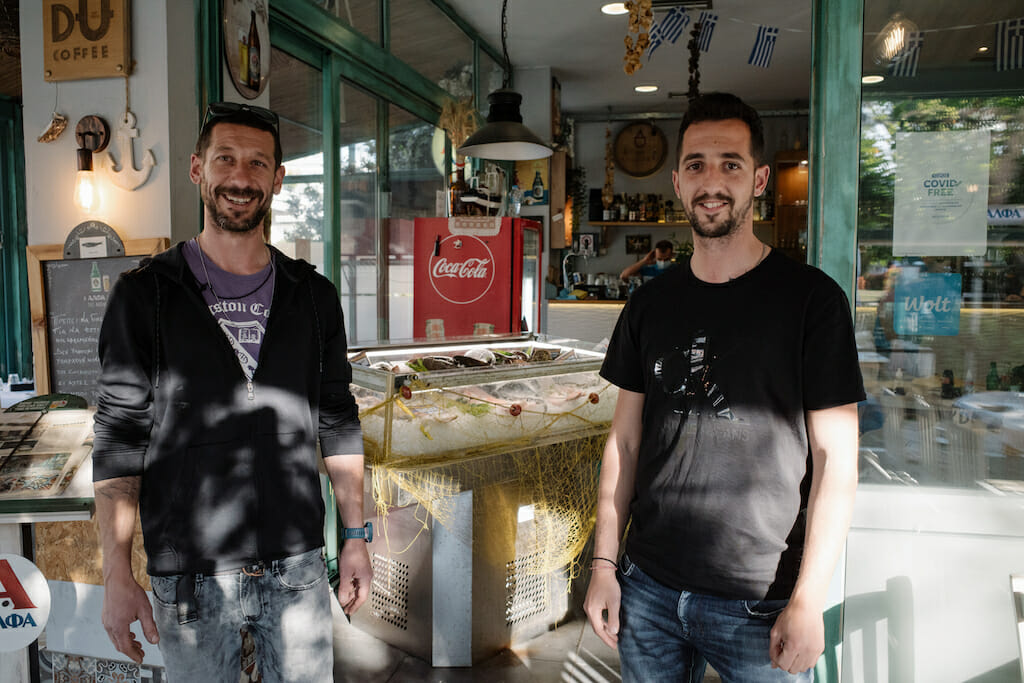 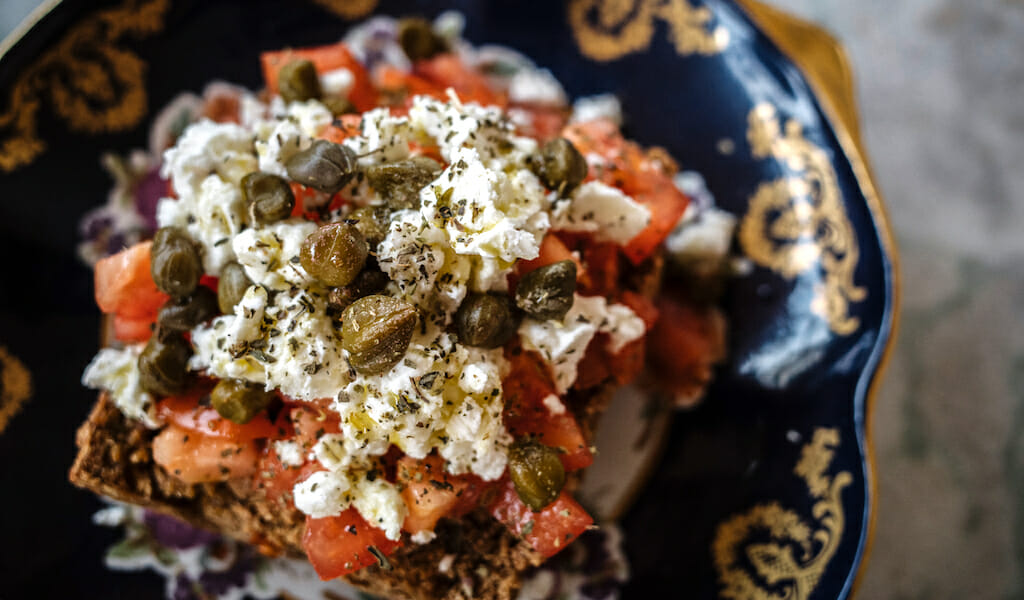