Phaleron, a Slice of Constantinople in Athens | Culinary Backstreets 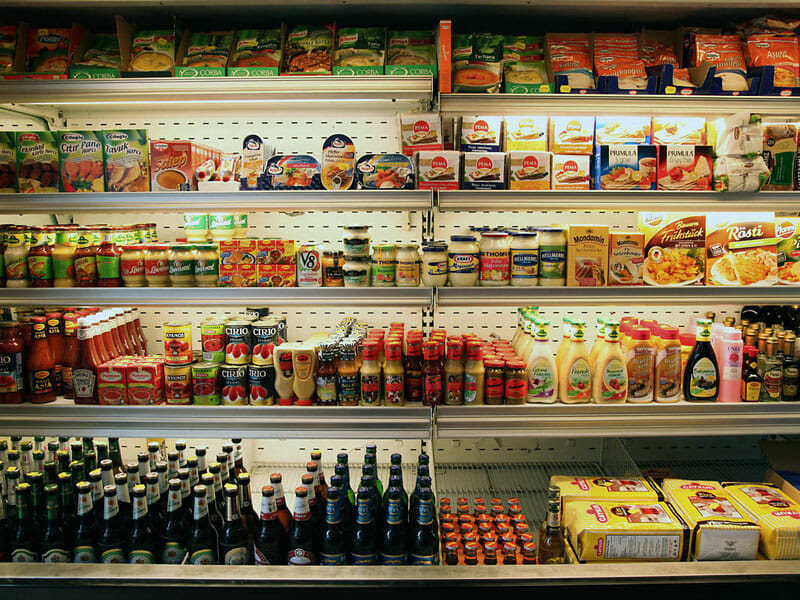 Once a resort town on the outskirts of the Greek capital, Phaleron – only a few miles from downtown Athens – is now well incorporated into the city’s urban fabric. The area has remained an upscale neighborhood, but, sadly, it has lost its distinctive character: the sea is now polluted, the open-air cinemas have been turned into parking lots, and many of the stately mansions were demolished to make way for apartment blocks during the construction boom of the 1960s.

One thing does remain unique about the neighborhood: it is home to Athens’ largest concentration of Constantinopolitans, or Greeks of Istanbul, known as İstanbul Rumları in Turkish. Despite living for centuries under Ottoman and then for several decades under Turkish rule, the Greek community had long insisted on staying in their beloved city. Nevertheless, in 1964, amidst the Cyprus dispute, Turkey began deporting Greek nationals residing in Istanbul; soon, those holding Turkish passports also began to leave, following their relatives. In the years to come, the community was to shrink to no more than 5,000 people in a city of almost 13 million. Searching for a place in Athens that would remind them of the city they left behind, the migrants settled in Phaleron; the seafront there was the ideal backdrop for the nostalgic expats to relive long walks along the shores of the Bosphorus. 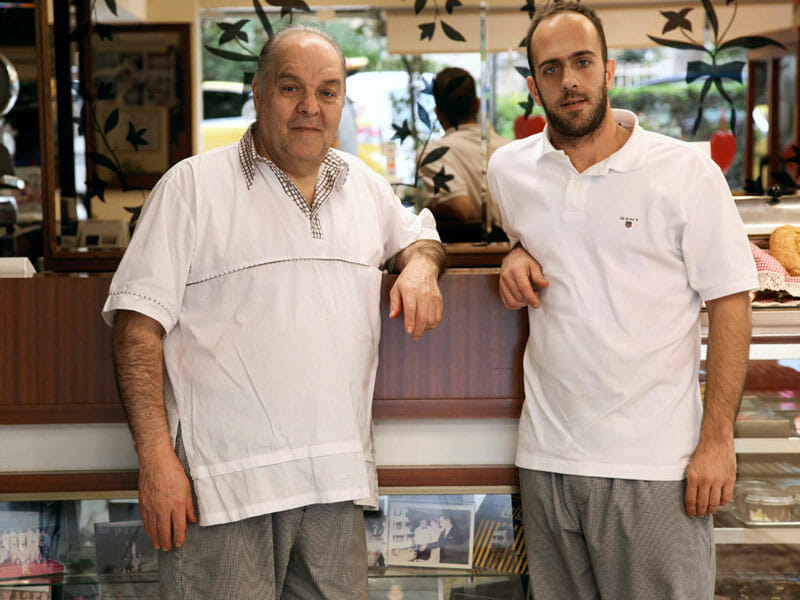 Without a doubt, what the newcomers missed most was the food. Over the centuries, Constantinopolitan women had developed a highly exquisite cuisine reflecting the city’s cosmopolitan heritage. East and West mingled in their kitchens, where French techniques were used to master traditional Ottoman dishes. The Constantinopolitans found the Athenian culinary scene rather bland; in their nostalgia, everything in Istanbul had simply tasted better, while the Greek equivalents were of disappointingly poor quality.

An accidental system developed; if someone was going back to Istanbul, the news would travel fast and people would call and ask the traveler to pick up their pension money and bring them limon kolonyası (lemon cologne) to rub their backs, holy water from the Church of Our Lady of the Spring (Balıklı Kilise) to heal their illnesses and save their souls and, of course, lots of glorious food and ingredients! Luggage was stuffed with yufka (paper-thin sheets of unleavened dough, similar to Greek phyllo), Turkish delight, baklava, wheat kernels and roses. Wheat is the main ingredient in kollyva, a dessert served in church after the memorial service for the departed; of course, wheat could be found in Greece, but the Constantinopolitans didn’t like it. Meanwhile, roses from Istanbul are edible and were used to make a superbly aromatic gül reçeli (rose jam).

In their nostalgia, everything in Istanbul had simply tasted better, while the Greek equivalents were of disappointingly poor quality.

The shop owners of Phaleron soon found themselves having to fulfill the demands of their new clientele. The owner of a butcher’s shop in the neighborhood even had to go to Istanbul to be trained in how to finely slice meat, as he could not stand the Constantinopolitans’ constant complaints that he was chopping meat too coarsely. Over the years, many Constantinopolitans opened businesses of their own, and Phaleron became known for its elegant patisseries.

Among these patisseries is Riviera, owned by Stelios Karapiperis, who was born in Istanbul in 1948 and has been in the pastry business since he was 13. Before being deported to Greece, he had a successful career as a pastry chef working for three prestigious Istanbul pastry shops: Baylan, Tilla and Tatlıcılar. “I was trained as a pastry chef during the golden age of the Istanbulite patisseries; in those days, renowned Swiss pastry chefs used to come to Istanbul to give seminars to the trainees,” Karapiperis recalls. He opened his own pastry shop in Phaleron in 1978 and his son, Yannis, has followed him into the business. When Paskalya çöreği (Easter brioche) is being baked in Riviera’s ovens, the scent of mahlep (an aromatic spice made from cherry seeds) and mastic (an aromatic resin) wafts over the entire block. Riviera also makes very good ekmek tatlısı (a syrupy toasted bread dessert) and excellent profiterole, a dessert that has a tradition of its own in Istanbul. 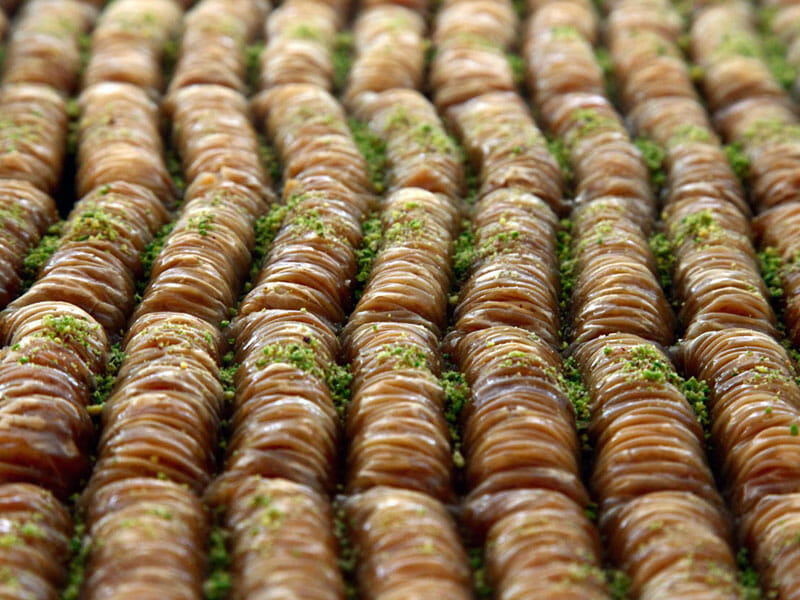 Kostas and Christos Lemoncoğlu, the owners of Divan Patisserie, have succeeded where others failed, by creating kaymak, a special type of clotted cream, in Greece. Producing kaymak is a risky business, as the recipe calls for water buffalo milk, which is extremely scarce in Greece. They nevertheless found a way to make kaymak using sheep’s milk, with a taste very close to the original. Besides its kaymak, Divan is also known for its excellent tavuk göğsü (milk pudding made with chicken breast), kazandibi (tavuk göğsü with a thin, caramelized crust) and crispy, syrupy baklava. “A business can be called ‘Constantinopolitan’ only if its owners were born and raised in Istanbul. My pastry shop will stop being Constantinopolitan when I retire and my daughters take over. They were born and raised in Greece; they go to Istanbul only as tourists, carrying the memories of their parents and grandparents of an era that has been irreversibly lost,” Kostas Lemoncoğlu says.

The Lemoncoğlu brothers can be proud of their kaymak success, as there have been many other attempts to produce Turkish specialties in Greece and they have all failed. It was determined to be impossible to achieve the creamy, gluey texture of an authentic Turkish delight or to make yufka so thin as to be transparent; the Constantinopolitans blamed the Athenian water for the mediocre results and decided that it was better to import these items. The demand for Turkish yufka in Phaleron is so high that a guy even began smuggling yufka into Greece using his own network in Turkey; Constantinopolitan ladies would place orders with him and he would wait for them at a certain streetlight to provide them with their precious sheets of yufka dough.

Benito’s Delicatessen also caters to Phaleron’s demanding clientele. Benito Sangioni’s Italian father settled in the western Turkish city of Edirne before World War I to work for the Ottoman railways, and stayed in Turkey after falling in love with a local Greek girl. When the family moved to Istanbul, Benito started working in a delicatessen, where he met his future wife, Eudocia. They moved to Athens in 1979 and now run a delicatessen of their own, along with their grown sons Liborio and Apostolo. Turkish delight, dil peyniri (string cheese), yufka, Turkish black tea, Efes Pilsen beer and spicy pickles are all imported from Turkey. Their sucuk (spicy sausage) and pastırma (spiced dried, aged beef) are in fact sourced from within Greece, as local charcuteries run by Armenians – themselves Ottoman-era refugees from what is now Turkey – make sucuk and pastırma of exceptional quality. Eudocia has also introduced her own line of products, including taramasalata (fish roe dip), savory pie made with pastırma, and yalancı dolma (rice-stuffed grape leaves); her silky baba ghanoush (eggplant dip), with its distinctive charred flavor, is renowned. 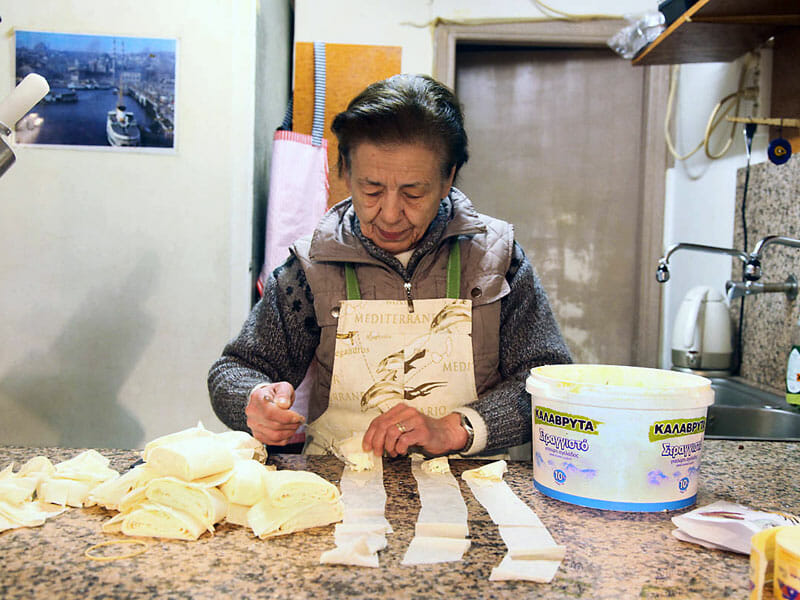 These days, Phaleron even has a new Turkish restaurant, Aialis, a little taverna opened about four years ago by Angelica Vingas, who emigrated from Istanbul in the early 1980s. To keep things authentic, she imports lakerda (pickled raw fish), yufka, red pepper paste and pickles from Turkey. Some of the traditional delicacies on Angelica’s menu are piyaz fasulye (bean salad), mantı (meat dumplings) and hünkar beğendi (“sultan’s delight”), an eggplant purée.

I was born in Istanbul and grew up in Phaleron myself; even though I moved out of the area a long time ago, each visit back to the neighborhood is an edible walk down memory lane for me. For us transplanted Istanbulites, memory goes hand in hand with food, as cuisine is so much a part of our identity. Every time we visit one of these shops in Phaleron, all these familiar foods are suddenly transformed into exhibits in our very own Museum of Innocence.

Editor’s note: This guest feature was written by Nicolas Nicolaides, an Istanbul-born Greek who moved to Athens in 1988. Nicolaides is a Ph.D. student in history at the University of Athens whose research focuses on the Karamanlılar (Greeks from Central Anatolia). 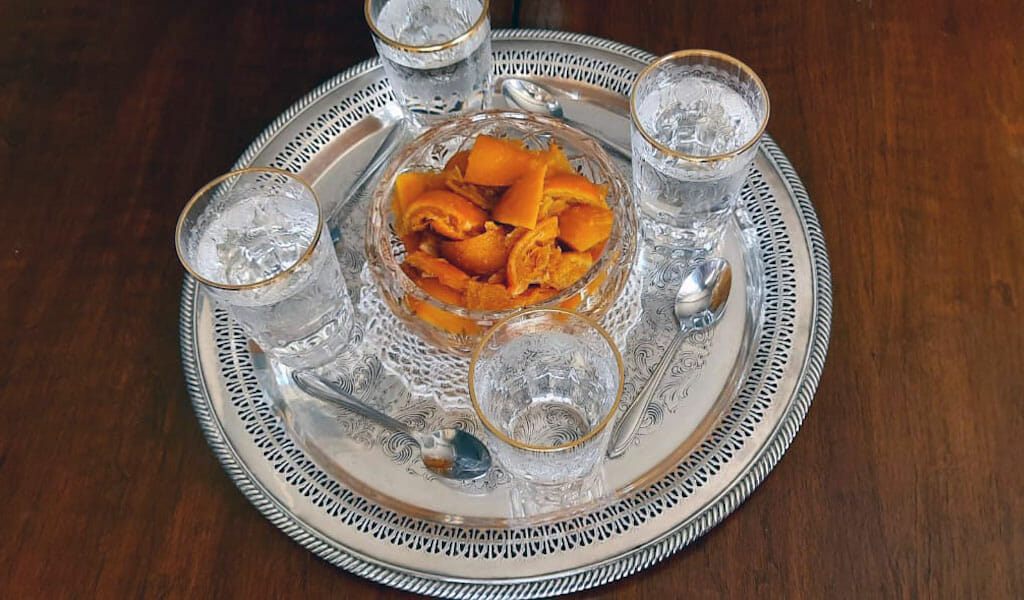