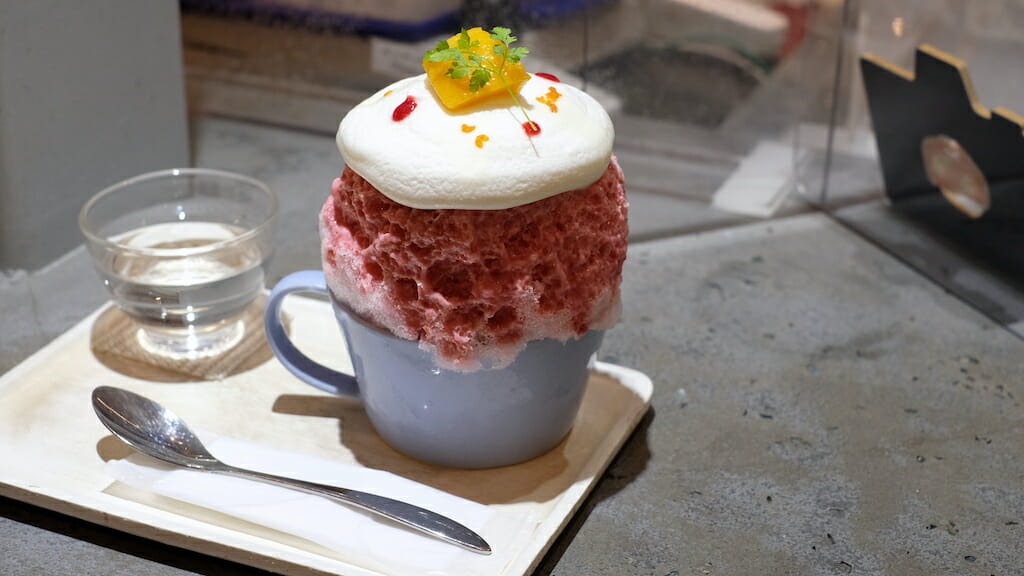 CB on the Road: The Art of Kakigori at Nara’s Housekibaco

Sōsuke Hirai’s hands tilt this way and that as the machine whirrs, raining large, fine flakes of ice into a bowl. He pauses the machine, lightly pats the ice and taps the bowl on the counter, allowing the ice to sink and compress. A swirl of persimmon tea syrup is added to the ice. Then it goes back under the machine for a second ice shower. Over this, several twirls of a cinnamon-infused milk syrup, a few tea-flavored meringue cookies, two large soup spoons of rum-spiked zabaglione. More ice. His hands gently coax the shavings into an elegant dome.

It’s now as large as an ostrich egg, maybe bigger. Hirai drenches the entire dome in a creamy yellow chestnut syrup. Pass me that container. On top goes butterscotch cream, several dollops as thick as paint. Ogawa-san, where’s the caramel? In the fridge? Okay, thanks. A spiral of caramel, a scattering of phyllo pastry flakes, a dusting of powdered sugar. After all this, the finishing touch: a single candied chestnut placed just so at the apex. 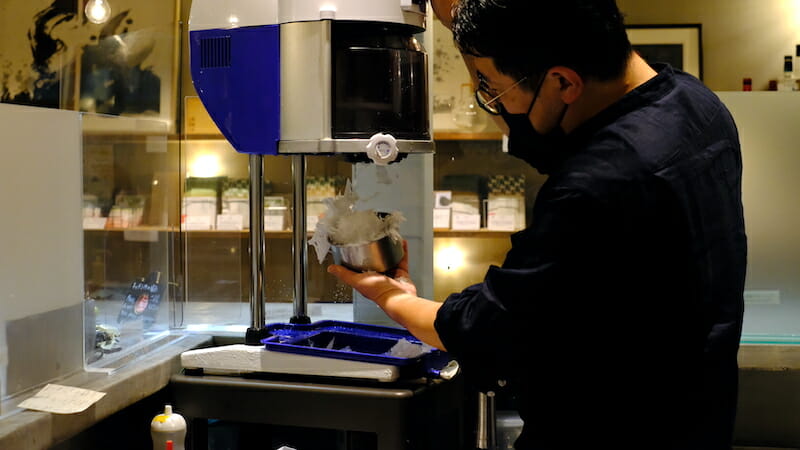 We are watching all this behind the counter at Housekibaco, a shaved ice specialist in Nara City – its name translates to “treasure box.” After-hours on Tuesday evenings are for recipe testing, and we’ve been allowed to stay on for taste tests with the other staff. This newest creation is a veritable sugar bomb that starts rich and finishes light and sweet. It passes muster with everyone; we scrape the bowl clean.

This complex, multi-layered creation is not your average shaved ice. But then again, Hirai is not your average kakigori maker. For the cofounder of Housekibaco, one of Nara’s most famous shaved ice purveyors, kakigori is a calling. Shaved ice is the entire reason he relinquished his position as the 10th-generation head of a major family-run kakinohazushi (persimmon leaf-wrapped sushi) business around the mid-2010s.

His love for kakigori is evident in the way he speaks about ice: with fire in his eyes, fervor in his voice. We are here to chat about shaved ice technique, and he is more than happy to oblige. As he talks, he scribbles on scraps of paper, as though externalizing his thoughts. The scrawls and diagrams are almost Basquiat-esque in their energy. 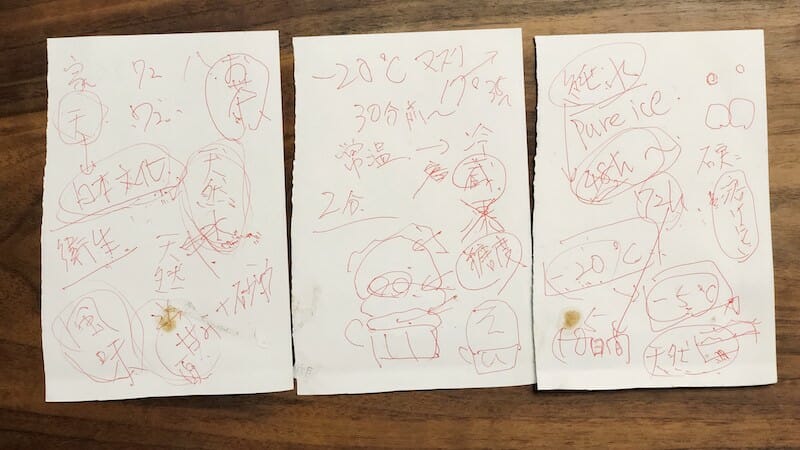 The syrups and flavor combinations are important, of course – the inventive, ever-changing seasonal menu at Housekibaco is a major reason for its popularity. But more fundamentally, all excellent kakigori at Housekibaco begins with “pure ice” (純氷 junpyō), which they order from a local ice maker in Nara. Besides removing any impurities from the water, slow-freezing over a period of 48 to 72 hours ensures the development of larger ice crystals, and therefore harder ice that melts more slowly than regular ice.

Ice must also be tempered before shaving, which means taking it out around half an hour prior for it to warm up from -20°C to around -5°C. Hirai shows me a block straight out of the freezer to demonstrate his point. The surface of the ice is dry and hard. Shaving this makes harder, powdery flakes, a little like patbingsu (Korean-style shaved ice). A warmer block of ice makes softer, finer flakes that hold their shape. But there’s no time to measure its surface temperature at work; you have to know by sight when the ice is ready. It’s a question of experience. 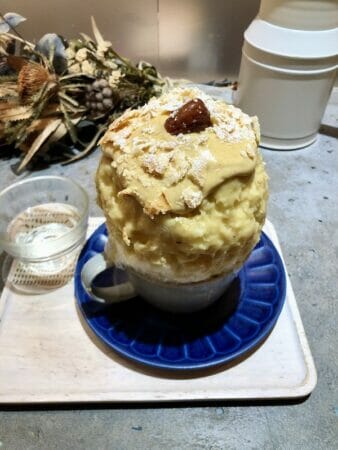 “That’s why popular kakigori shops can’t expand easily,” he explains. “You need skills like this.”  This is the other (not-so) secret to great kakigori: skill. Being able to read the ice, adjust its texture on the fly, eyeball just enough syrup on each layer without the entire creation collapsing – the minute details of a two, maybe three-minute process are difficult to teach and articulate. As with most skills, it’s about practice. But some people take to it faster, says Hirai. Some people are naturals. At Housekibaco – he lowers his voice – they only hire people who can quickly pick up kakigori-making skills. 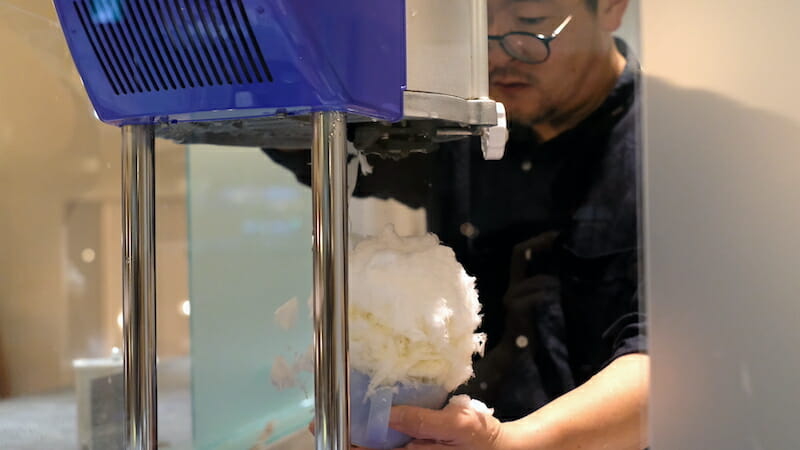 “What we mean by that is that they can get it right on the first go, more or less,” he says. “Then we’ll have them practice making around 50 bowls before they can ‘debut.’ And we have many different tasks in the shop, so we’ll always find something for people who aren’t naturally good at it. We’re not going to force people who can’t make kakigori to make it.”

Put all of the above together and you have the makings of excellent kakigori. But that’s not all. The ice in kakigori should be thoroughly saturated with flavor, and you should be able to eat your way through the entire thing without getting bored. Conversely, says Hirai, bad kakigori has many patches of unflavoured ice, and is one-dimensional and monotonous. Sometimes the ice hasn’t been shaved properly, the syrups lack depth or the ice itself is no good. There’s no end to his opinions on kakigori. 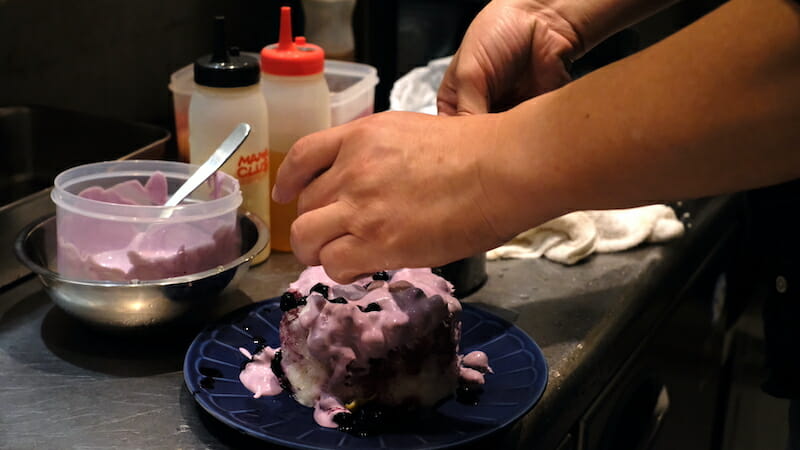 The taste tests continue. A pear and sudachi combination receives enthusiastic praise. The pistachio butter Hirai has concocted for another blueberry-mango-cream-cheese creation meets skepticism: It is gorgeously nutty, but the sheer amount of butter causes it to clump on contact with ice. It won’t do. We spread it on biscuits instead. He waxes lyrical about the tachibana’s complex depth of flavor, how this tiny citrus’s punchy bitterness, acidity and astringency lend itself to fantastic syrups for kakigori.

“Are you always thinking about flavor combinations, or what?” we ask him, swallowing a spoonful of perilla syrup-soaked ice.

Hirai looks at us, utterly serious. “I am always thinking about kakigori.” 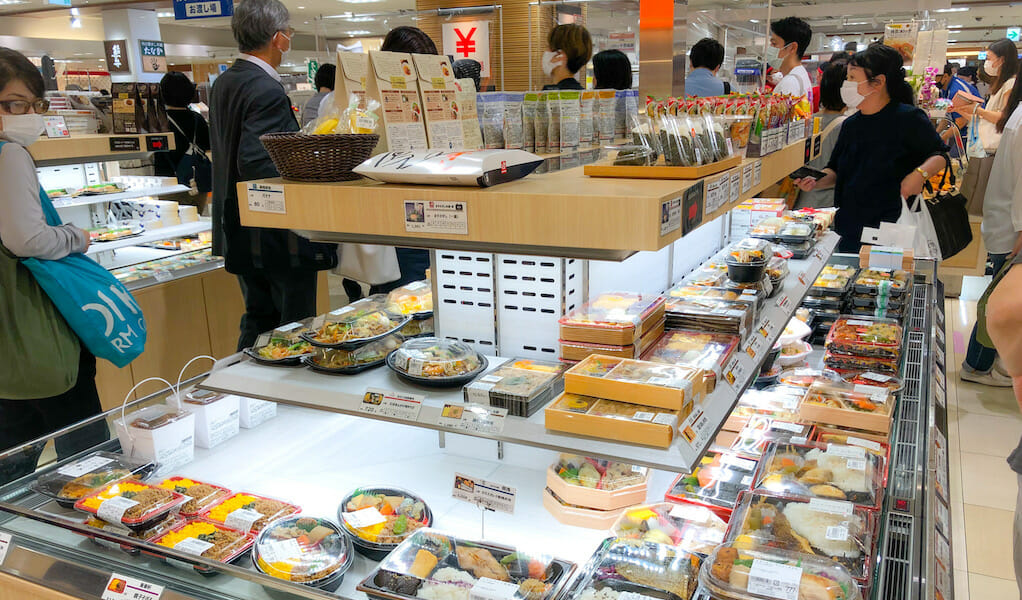