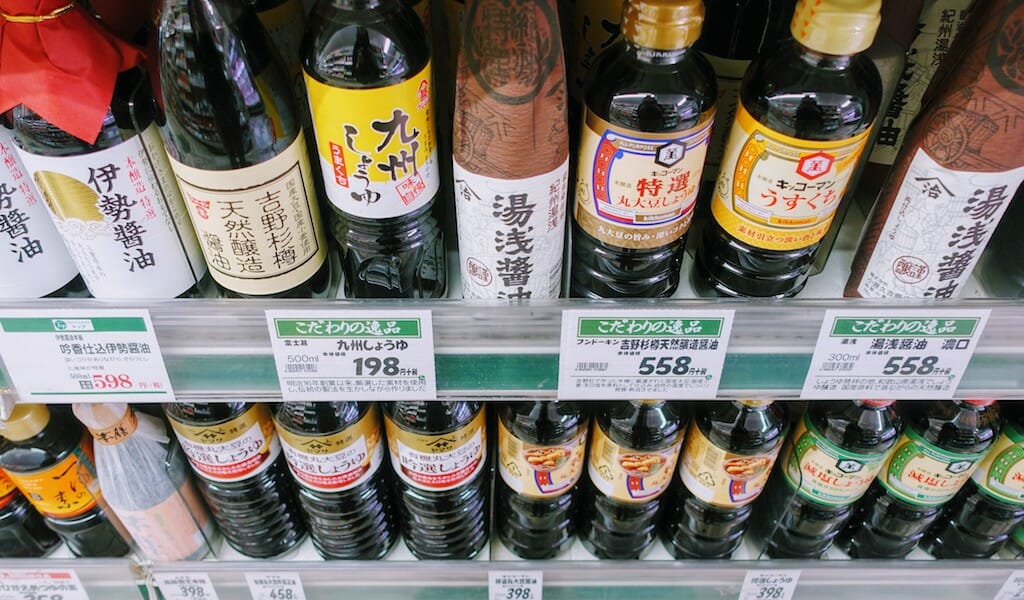 So ubiquitous as to be rendered almost invisible, the sticky bottles of soy sauce that decorate every table, counter and shelf in Japan are never far from reach. Both an ingredient and a condiment, there isn’t a chef in the land who would begrudge a diner a dash of the sleek black sauce – be it at a Michelin-starred sushi restaurant or a back street ramen joint.

While the bottles are often slung behind stacked menus, their everyday presence is no sign that their contents should be underestimated. As common as table salt but infinitely more complex, the sweet, salty mix offers a glimpse of the sought-after umami flavor Japan is famous for.

At its earliest discovery, Japanese soy sauce – known as shoyu – was a leftover, a byproduct of the popular miso. It is said that the Buddhist monk Kakushin, returning from studies in China over 800 years ago, brought with him a recipe for kinzanji miso. Named after the temple at which he studied, the vegetable-preserving recipe was soon adopted by his hometown, Yuasa. Subtly affected by the local climate and ingredients, however, the usually sturdy result became watery, with a residue appearing at the bottom of the barrel – an early form of the viscous tamari sauce. And so Yuasa became the birthplace of Japanese soy sauce. 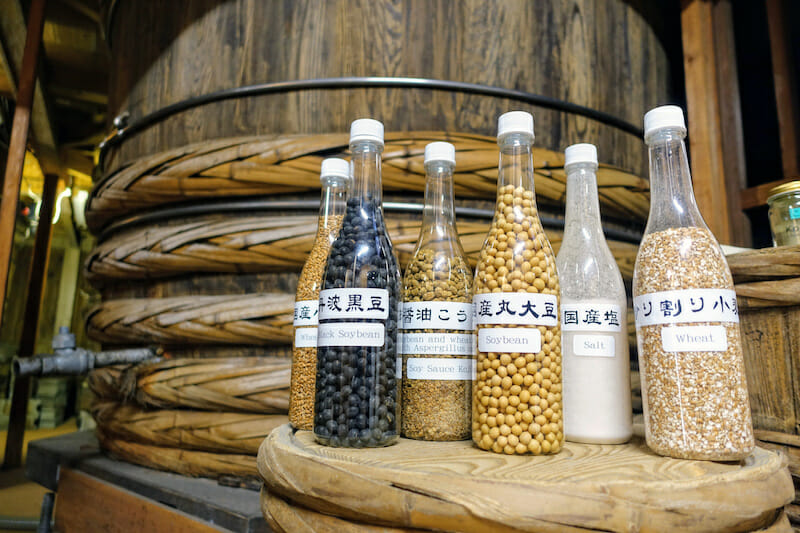 “The water in the town was so good,” explains Yukari Konishi, a long time worker at Yuasa Shoyu, a soy sauce manufacturer. “The practice spread and eventually it was sent all over Japan.” Still producing their soy sauce using traditional methods, Yuasa Shoyu has been in business for well over 100 years. Starting when local trader Sumi Shinko began selling her homemade kinzanji miso in 1881, today the business is run by fourth-generation owner Toshi Shinko and is one of only four remaining from Yuasa’s original band of 92 soy sauce businesses.

At their factory in the town, the entire production process can be followed from start to finish, without a single machine in sight. Roasted wheat and special black soybeans from Kyoto are mixed with koji, a starter mold, and left for four days to break down. After adding local spring water and salt, the mix is placed in large wooden barrels to ferment for up to three and a half years, mixed regularly by hand. When at least eighteen months have passed, the mash is poured into cloth bags and pressed, producing nama shoyu. Finally, the sauce is heated over a pine-fed fire in a specially made steel pot, the scum is removed and the sauce is ready for bottling. 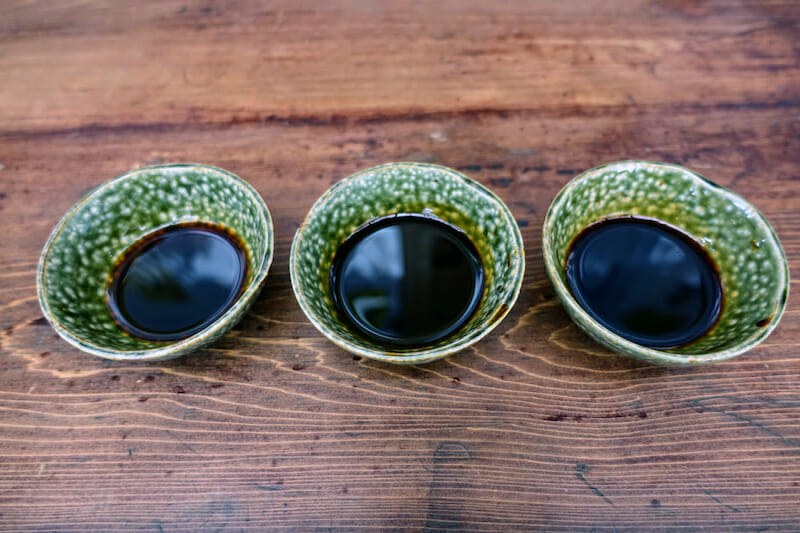 “Unlike soy sauce which can be made quickly in factories, we use carefully selected Japanese ingredients, spending time and effort to use traditional manufacturing methods,” Yukari explains. “This involves a long-term maturation process using wooden barrels and means the soy sauce we create will have a complex and rich taste.”

The labor-intensive production of soy sauce was initially what kept it within the higher echelons of Japanese society. It was only in the 16th century that the sauce began to be made on a larger scale, becoming more than a family production. Shipped from Yuasa to Tokyo in the 17th century, the condiment was adapted to complement the abundance of seafood in the region; across Japan, distinct varieties started to emerge.

“Although soy sauce has a secondary role in cooking, it is an important element that can change the taste of the dishes entirely.”

Today, a mere glance at the crowded shelves of any local supermarket’s shoyu selection will attest to the vast variety available. To the well-trained tongue, the familiar red-topped Kikkoman option and the paper-wrapped bottle beside it are worlds apart in flavor, even though they share the same name. In his acclaimed Japanese cookbook Japanese Cooking: A Simple Art, chef and teacher Shizuo Tsuji introduces the two primary categories: dark (koi-kuchi, which literally means “black mouth”) and light (usu-kuchi). The darker variety is more common and offers a deeper flavor, while the amber-colored usu-kuchi is thinner, lighter and saltier.

These two kinds form the cornerstones of the official five kinds of shoyu, as determined by the Japanese Soy Sauce Association. Tamari, the oldest form, has a rich umami base as it uses more soybeans and is produced most famously in the Chubu region of Japan. For those after an even darker flavor, saishikomi is a double-fermented sauce that is best served with sashimi due to its mellow but rounded flavor. Most unusual, the fifth kind is shiro shoyu – meaning white, it has a light and sweet flavor often favored by chefs looking to preserve the natural colors of their ingredients. 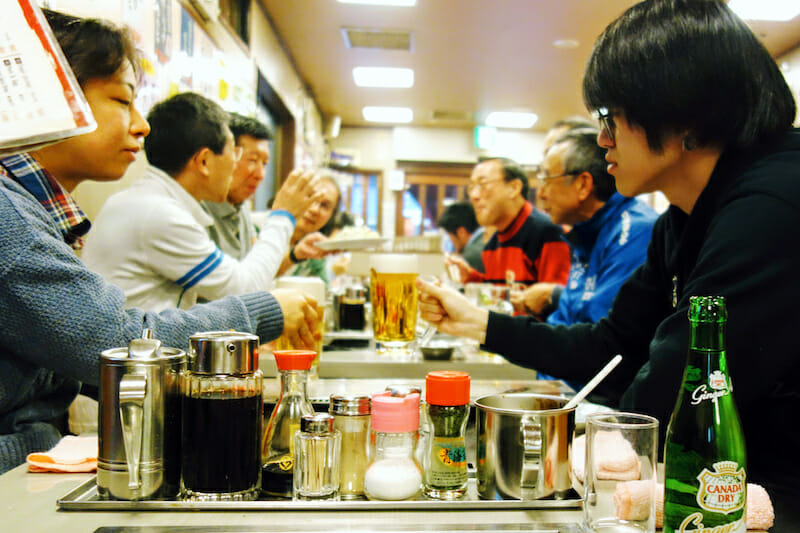 As koi-kuchi accounts for over 80 percent of the soy sauce consumed in Japan, it’s a safe place to start for those seeking a strong all-rounder. The quality, however, is as vital as the kind, if not more so. As Tsuji, long considered Japan’s ultimate connoisseur, writes, “The quality and good flavors of naturally brewed Japanese soy sauce are reflected in the word ‘natural.’” Opting for the natural over the artificial is vital, something Yuasa’s traditional production is well known for. With no artificial flavors, umami seasoning or enhanced maturation processes, the natural sauces of Yuasa are a taste of tradition.

“Although soy sauce has a secondary role in cooking, it is an important element that can change the taste of the dishes entirely,” says Yukari, highlighting shoyu’s subtle but profound role in Japanese cuisine, from pot to plate.

Editor’s note: Our recurring Building Blocks feature focuses on foods and ingredients that are fundamental to the cuisines we write about. This article was originally published on December 13, 2019.

Tokyo | By Lily Crossley-Baxter
By Lily Crossley-Baxter
TokyoSo ubiquitous as to be rendered almost invisible, the sticky bottles of soy sauce that decorate every table, counter and shelf in Japan are never far from reach. Both an ingredient and a condiment, there isn’t a chef in the land who would begrudge a diner a dash of the sleek black sauce – be… 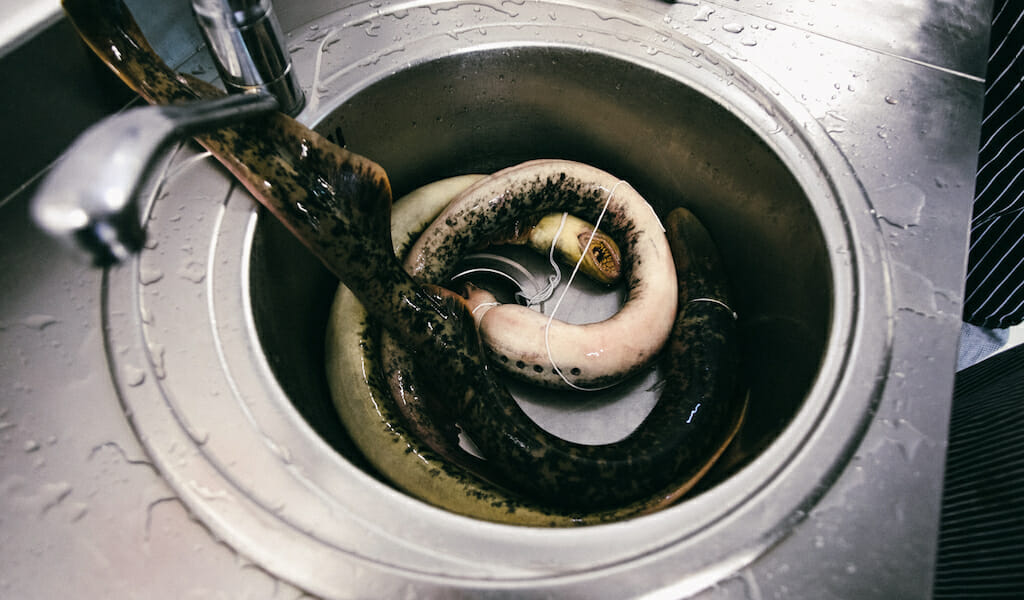 Lisbon | By Tiago Pais
By Tiago Pais
LisbonThese days, plenty of traditional restaurants in Lisbon display in their windows a homemade sign reading “Há Lampreia.” We have lamprey. This simple message is usually illustrated by a pixelated photograph of said creature, almost always taken from Google. While lamprey, an eel-like fish, is one of the ugliest in mother nature’s portfolio, many people…