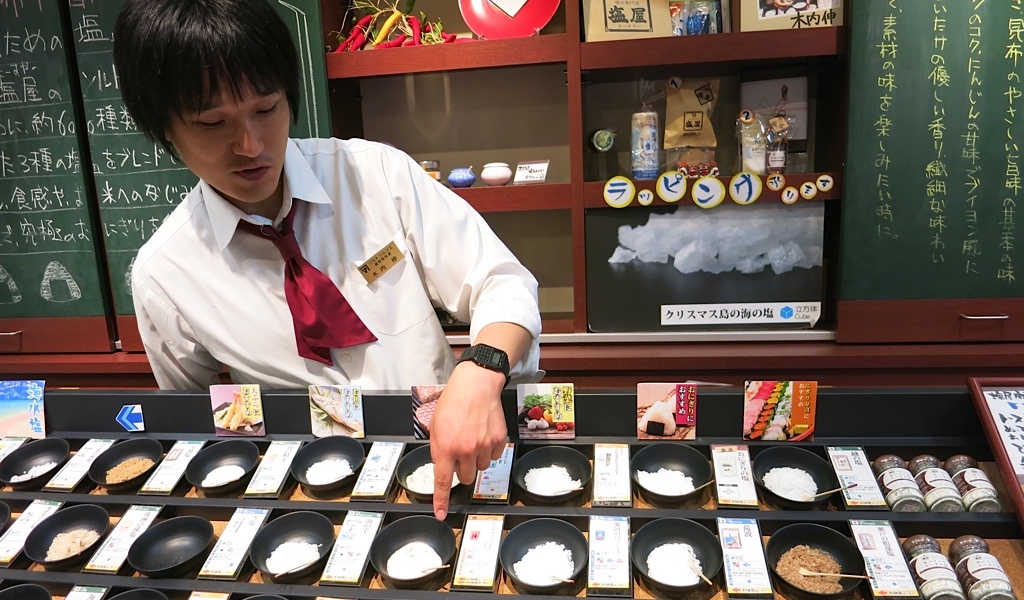 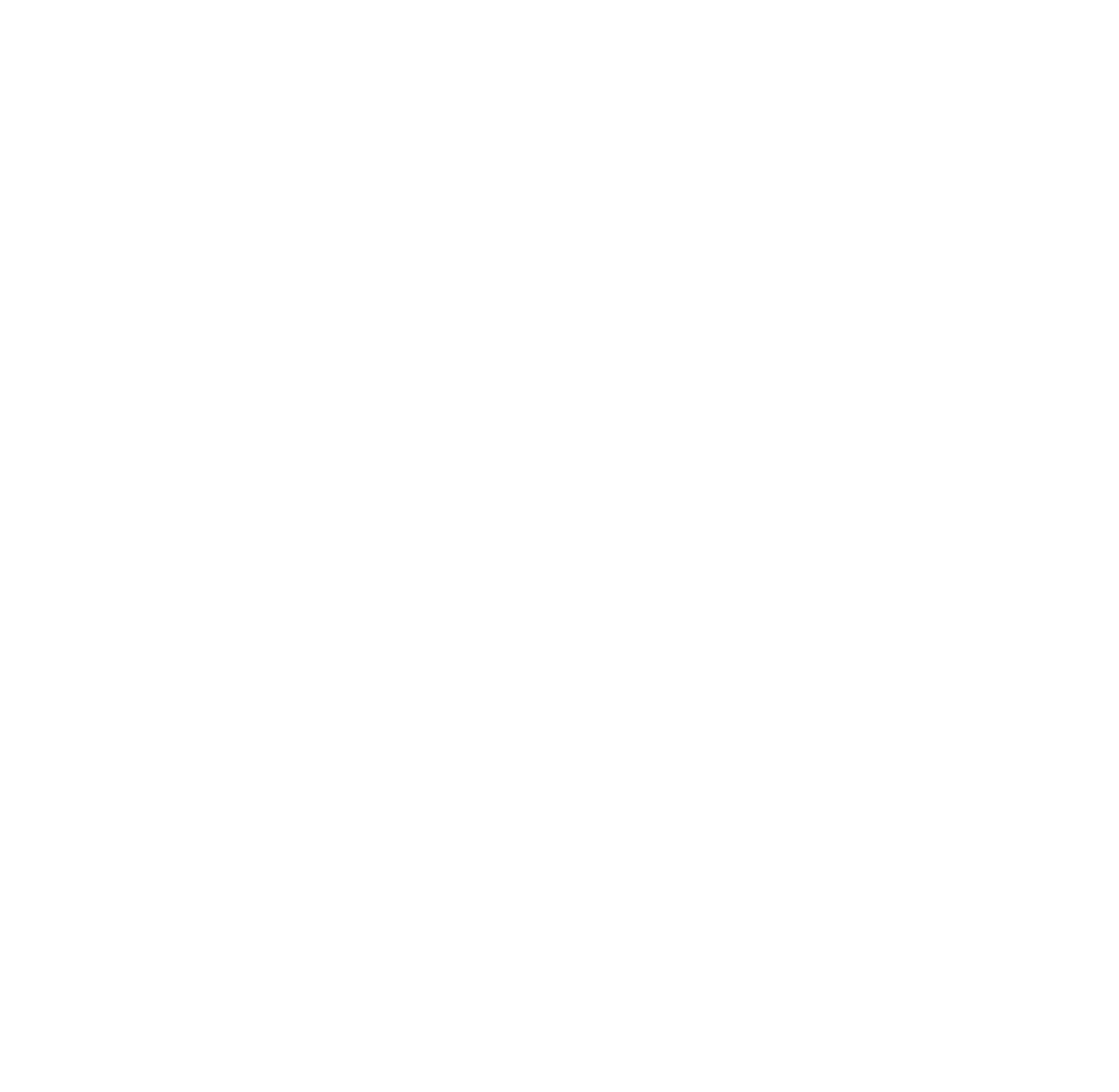 Japanese cuisine is often the art of quiet subtlety, and to that end, salt is one of its greatest supporters. The freshest of fish can be highlighted with a splash of the correct salt; cold sake drunk from fragrant cedar vessels is well enhanced with salt on the rim; and even tempura is frequently not dunked in sauce but instead sprinkled with salt by serious connoisseurs of fried delicacies.

Salt plays a very significant role in Japanese culture and religion. It is a sign of purification. Thus most sushi restaurants mound salt on both sides of the entrance to show the place is clean and pure. Sumo wrestlers will throw salt into the ring before a match. Japanese people frequently throw salt over the entrance to their homes to purify their households. We’ve even seen people with packets of salt in their car.

We had never been to a salt tasting, although we’ve been known to keep several pots of different salts on the table during meals. At Ma-Suya, where there are over 400 kinds of salt and salt-related products for sale, we were invited to sample a great many of the store’s offerings.

A salt concierge happily guides guests through the salty paradise.

Several rows of salt products encompassing everything from edible to spreadable are packed into this inviting space. Along the back wall there are bathing salts, massage salts and facial salts. Radiating out from there is a section of foreign, mainly Asian salts such as Indian Ruby Salt and packages that appear to range from spicy to soothing. Shelves of shakers and grinders are augmented by salt gear from around the world, including an amulet of salt suitable for hanging from a belt for hiking. Tucked amongst all of this are the inevitable truffle salts. Boxes of salty cakes and sweets are stacked near the entrance.

However, the star of the show is Yukisio salt, the house salt from Miyakojima Island in Okinawa. Yukisio salt is known to possess the most chemically diverse minerals of any known salt. It is blended especially by Ma-Suya and offered as the basis of a smorgasbord of salt-packed saucers nestled in an open tray ready for sampling. A salt concierge happily guides guests through the salty paradise.

There are over 60 tastes to choose from, divided into uses and spicy or sweet. There are salts for vegetables, meats, tempura and fish. A special salt has been blended for garlic toast. Not a fan of dipping sashimi in soy sauce? There is a salt for raw fish. Another salt is for boiled eggs. Also: seven-flavor chili salt, French fry salt with either lemon and herbs or laver seaweed, soup salt, rice topping salt, black sesame salt, golden sesame salt, ume plum and bonito salt, spicy dynamite or plain sesame salt, curry powder salt, Okinawa pepper salt, turmeric salt, sea lettuce salt, basil and hibiscus salt, matcha green tea salt, ginger salt and yuzu citrus salt either plain or blended with sesame. 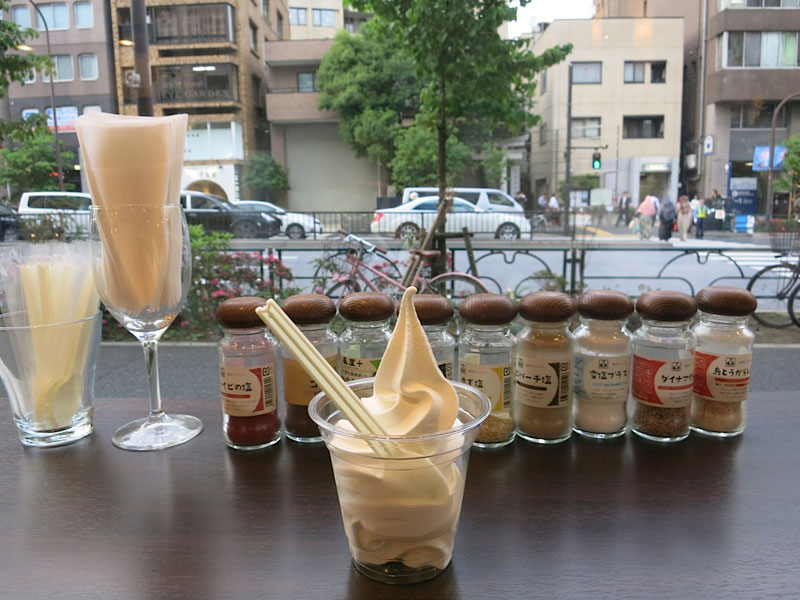 At the tasting, the salt concierge dipped into the small pots to give customers tastes and offered helpful hints on how to use these salts. If customers want a sweet salt the concierge will take them through several levels to find the correct one. Ditto for spicy. The highlight of the salt tasting we attended was the surprise ending: Yukisio soft-serve made from special milk carefully laced with a small amount of salt was dispensed into cones or small cups with spoons. On a counter at the front of the store were 11 shakers for sprinkling various salts on the ice cream: salt with cocoa, Okinawa pepper, Okinawa chili, hibiscus, wasabi, sesame, yuzu, green tea, fine snow plain (pure Yukisio) and spicy. It was difficult to decide whether to start with the mild and proceed to the sweet and spicy or to go the other way. Did we want to scoop from a cup or slurp salt off a cone? Even without the salt the rich ice cream was a treat. Topped by dashes of salt, it was heavenly.

The house salts are packaged in plastic bags or glass jars. Gift packs are wrapped in traditional Japanese boxes. The staff is courteous and very well informed. Ma-Suya is owned by an Okinawa concern that has two stores in Tokyo. Go to the Azabu Juban store when the English speaking manger/concierge is there for the best service.

This article was originally published on August 20, 2015. 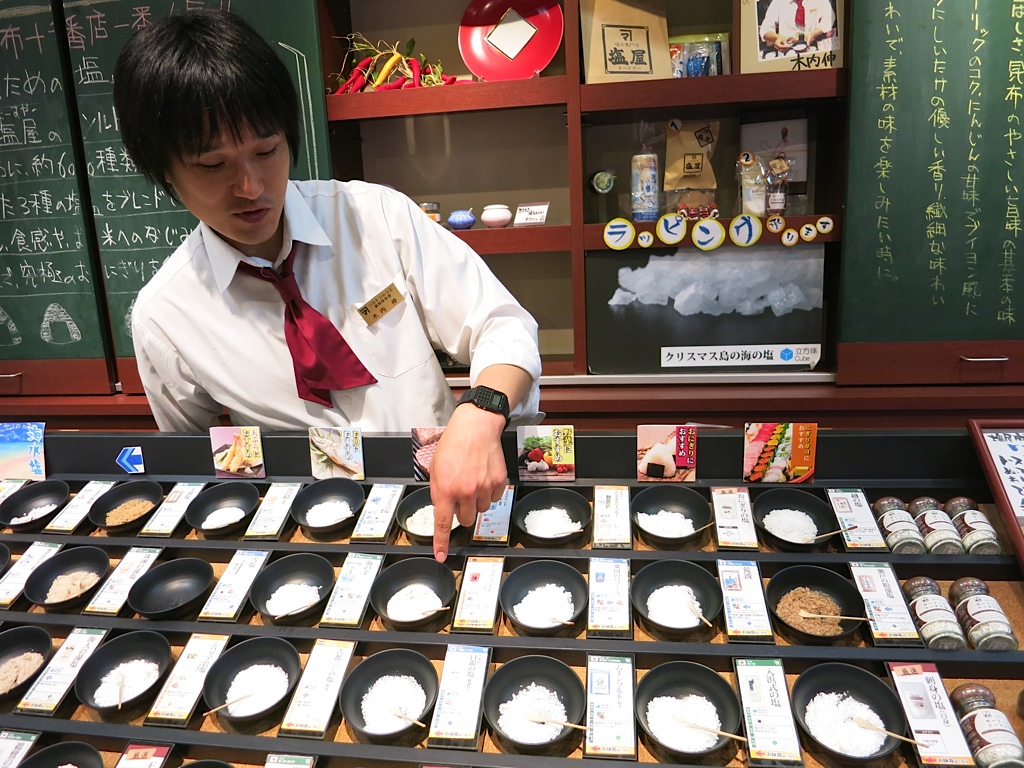 Tokyo | By Fran Kuzui
By Fran Kuzui
TokyoJapanese cuisine is often the art of quiet subtlety, and to that end, salt is one of its greatest supporters. The freshest of fish can be highlighted with a splash of the correct salt; cold sake drunk from fragrant cedar vessels is well enhanced with salt on the rim; and even tempura is frequently not… 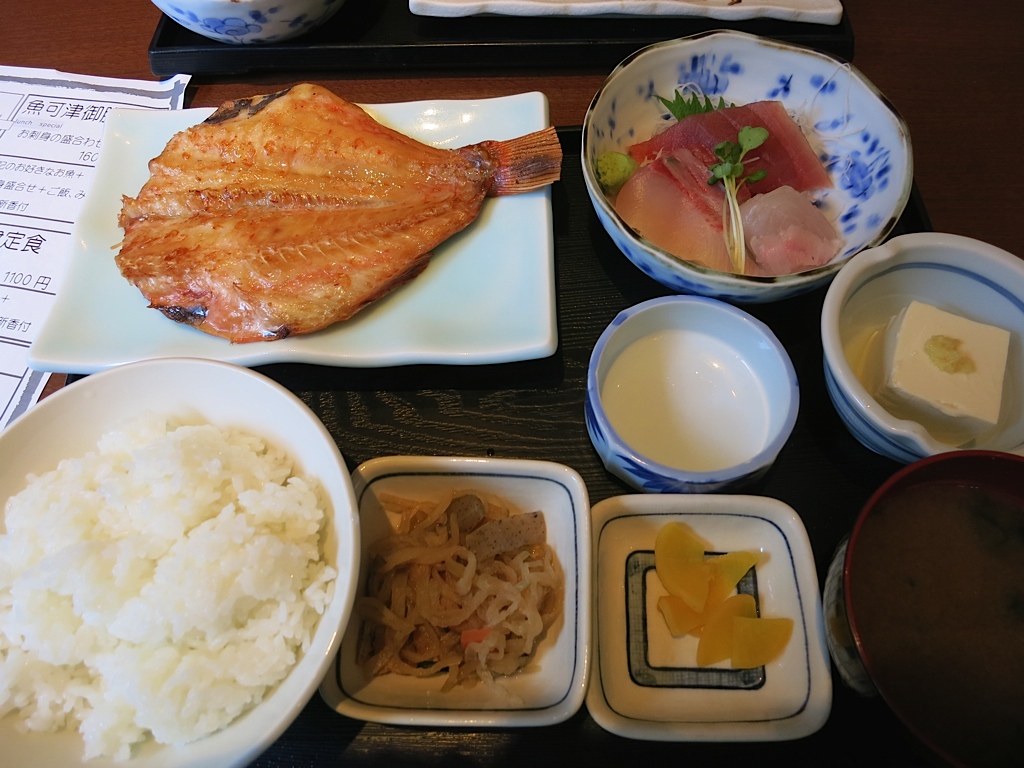