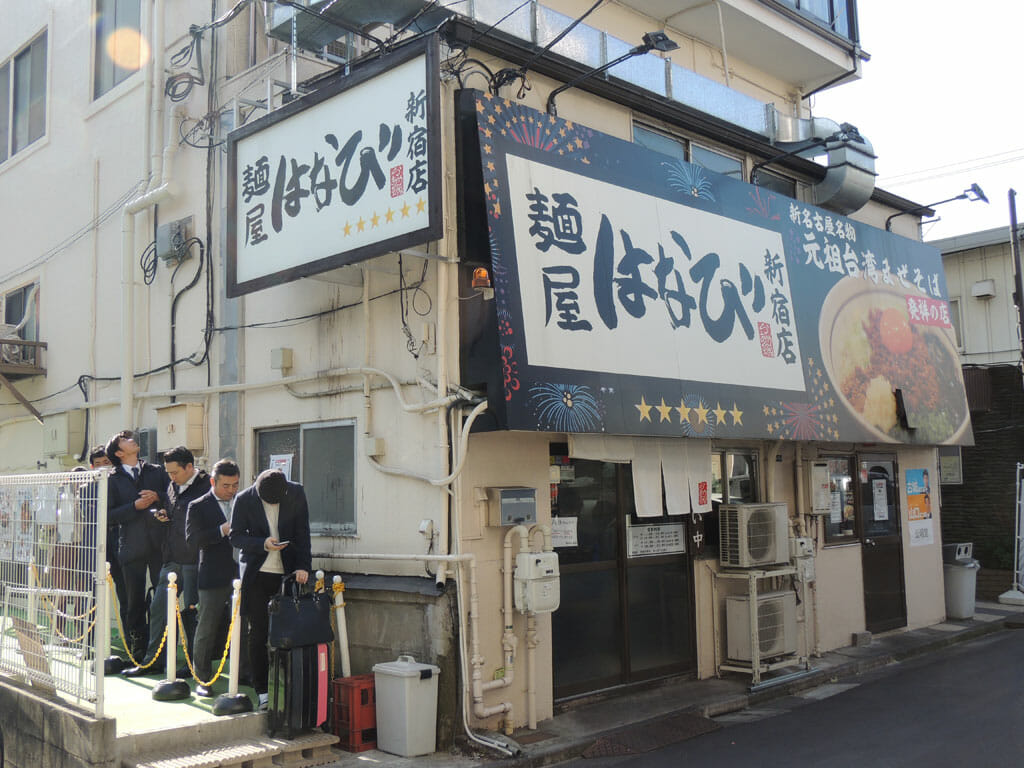 It’s an unseasonably warm winter day as we make our way through the residential backstreets of Higashi-Shinjuku. Drying laundry hangs on nearly every balcony of the low-rise apartments beneath a cloudless, blue sky. The streets are nearly empty, but rounding the final corner to our destination we join a stream of people from all four points of the compass congregating in front of the Tokyo branch of Nagoya-based maze-soba shop Hanabi.

The story of how this particular noodle dish came to be is a winding one. In the 1970s, the Taiwanese chef Meiyū Kaku was living in Nagoya and missed a few choice flavors from home. Specifically, he longed for the red chili peppers and spicy ground beef of Taiwanese danzai mian, which is itself modeled after fiery Sichuan dandan mian. Japanese ramen has its roots in this same tradition of Chinese noodle dishes, and so Kaku found an accessible canvas upon which to add the Taiwanese flavors he craved.

So-called Taiwanese ramen has since become a staple of Nagoya street cuisine. Then in 2008, Taiwanese ramen chef Naoto Niiyama was tinkering with Kaku’s recipe when he stumbled upon a simple, brilliant variation.

The main difference between Taiwanese ramen and maze-soba is that the latter doesn’t use broth, and so the ingredients are carefully laid atop the noodles for diners to stir in themselves. Niiyama dubbed his new dish maze-soba (maze means “mix”) and opened the flagship Hanabi in Nagoya in 2008. The Tokyo satellite opened to much fanfare in 2014, and noodle lovers from around the city continue to line up for the rich and spicy fare. 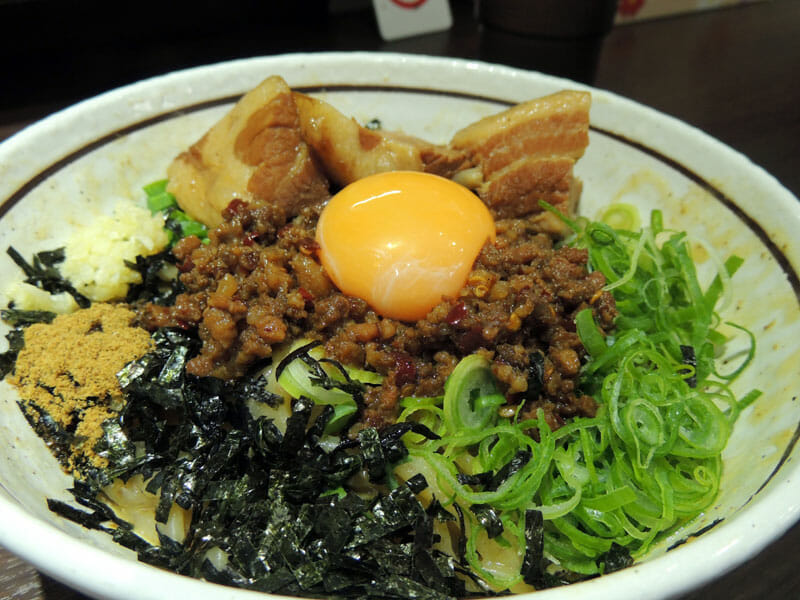 We’ve come on a weekday and so wait a modest 20 minutes. Once inside, the first thing we notice is the smell of fresh garlic and simmering pork emanating from the open kitchen. Mouths watering, we order a large serving of the shop specialty and Niiyama’s original creation, the definitive maze-soba, for ¥1,170 (about US$10.25). After receiving our steaming bowl of noodles we take a moment to admire the vivid ingredients. Bright green scallions, darker shreds of dried nori, ground beef tinged with flecks of vermillion chili and a rich yellow egg yolk are organized atop the white noodles like a painter’s palette. Small piles of freshly ground garlic and chili powder huddle to the side, full of gastronomic potential. The dish is meant to be enjoyed in three stages, the first of which is a simple mixing of noodles and their toppings.

Taking up a pair of chopsticks, we go to work, and the smell of fresh garlic tinged with an edge of dried nori and sharp, spicy chili oil wafts up. It tastes as good as it smells, rich and pleasantly spicy, with hunks of pork so soft and succulent that they’re easily prized apart by our chopsticks. We’re enjoying the meal so much we almost forget the second stage: midway through the bowl, diners are invited to pour vinegar to taste over the mixed noodles. We splash a couple of ounces, which give the overall flavor an astringent quality and wash some of the ingredients to the bottom of the bowl, letting us focus more on the chewy noodles. 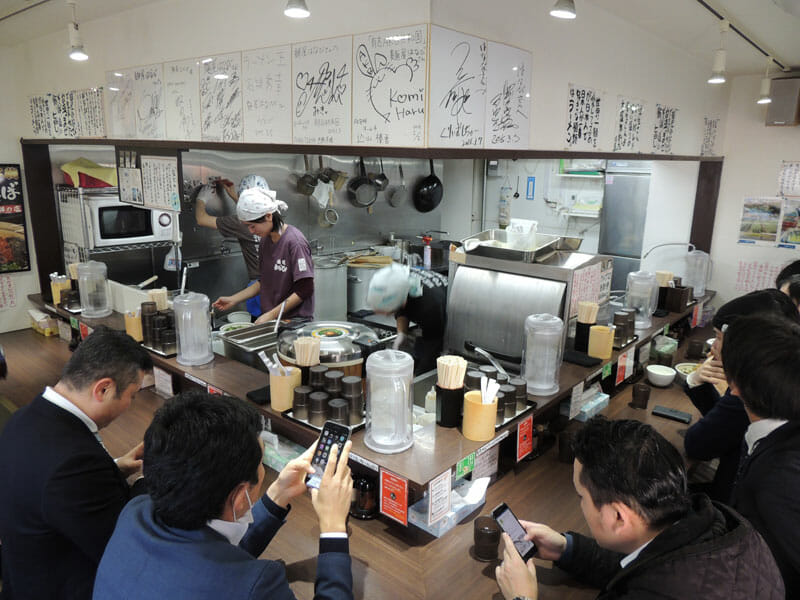 The soupy mixture left at the bottom of the bowl doesn’t go to waste. Once our noodles are gone, we hand our bowl back over the counter with a request for oimeshi, complimentary rice. A moment later our bowl returns with a heap of white rice rapidly soaking up the remaining ground beef, scallions, garlic, vinegar and egg yolk. Our chopsticks are useless now, and taking up a spoon we top off to a gut-busting finale.

It’s a good thing the weather is so fine, because this is a dish that requires walking off. 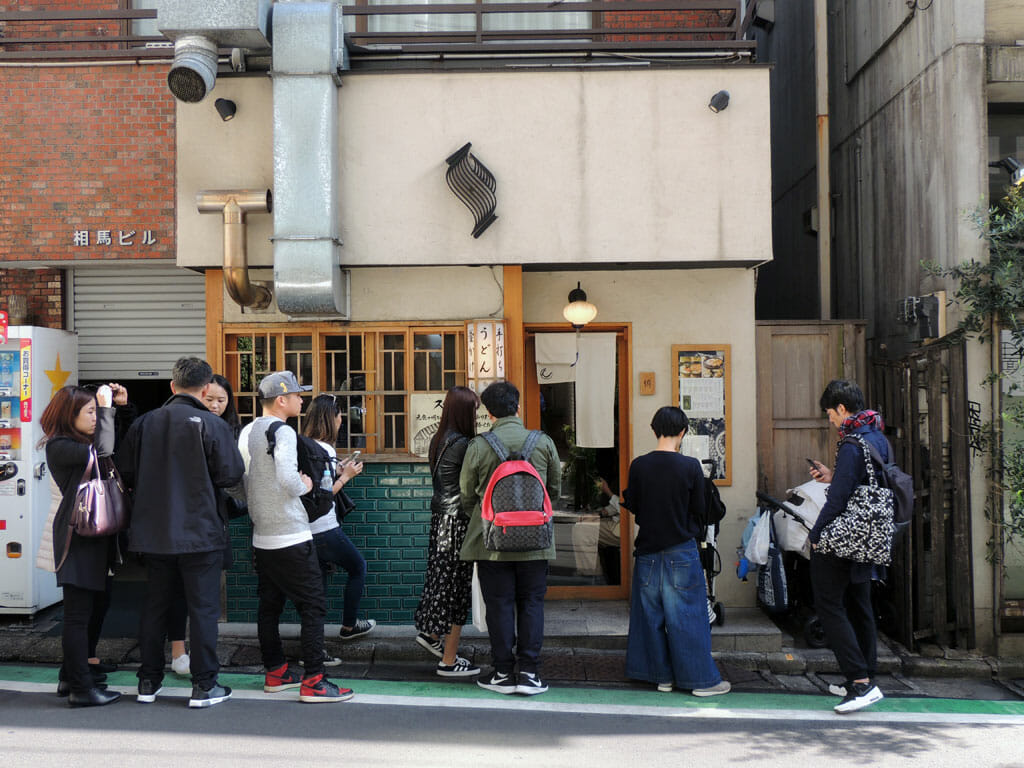 Tokyo | By Davey Young
By Davey Young
TokyoAnticipating a line, we arrived ahead of our appetite, but the slightly acrid smell of fresh dashi wafting over the street hurried our hunger. Tucked behind a handful of confounding corners southwest of Shinjuku Station in a mixed-use neighborhood of apartments, shops and offices, Udon Shin has consistently ranked among the best udon restaurants in… 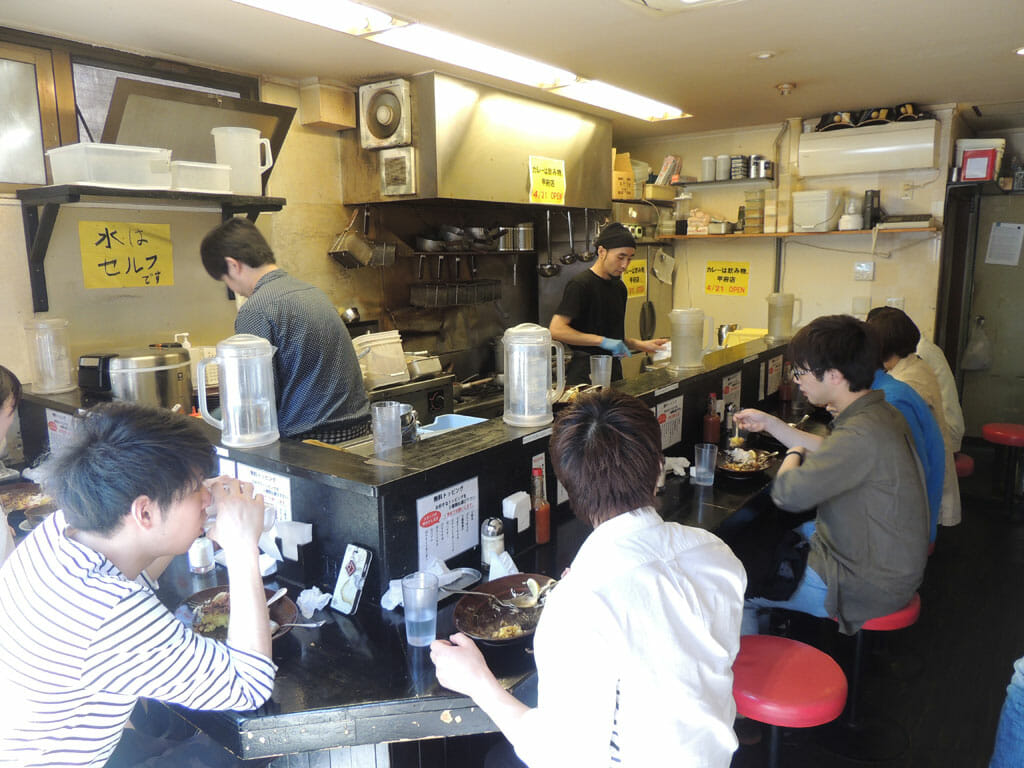 Tokyo | By Davey Young
By Davey Young
TokyoThis was a year of culinary highs for sure, ranging from the ridiculous to the seriously sublime. McDonald’s Choco-Pumpkin fries Yes, you’ve read correctly. While out researching some serious Halloween treats I stumbled on a Mickey D’s seasonal specialty for Japan – Choco-Pumpkin fries. Not only did a picture of it on the menu look…