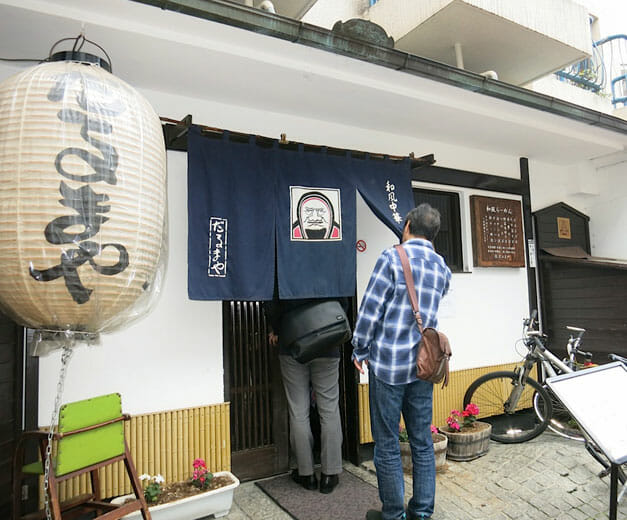 Almost 40 years ago Daruma opened its doors near Aoyama University, feeding the hungry students who flocked there, along with many neighbors and workers from the nearby office buildings. The prices were reasonable and the ramen was top class. Everyone came for the original recipe: Japanese-style ramen, with fresh house-made noodles and a pungently addictive broth of pork, chicken legs and vegetables, spiked with shoyu (soy sauce). Daruma opened as just a great place to fill your stomach with good food.

The world changed. These days, ramen noodles serve as a launching point for culinary daring around the world. And the area around Aoyama has become the center of everything kawaii and cool, which means that many small office buildings and wooden homes have been bulldozed and architectural wonders constructed to house brand-name boutiques, trendy pancake restaurants (American-style flapjacks are all the rage around Aoyama and nearby Harajuku) or flavored popcorn bars. Hello Kitty rules.

Nestled in a small concrete building on a side street so narrow that one would think twice before driving a car down it, Daruma-ya hasn’t changed one bit. The old-school spot still serves ramen with the restaurant’s original taste and inventive flair. The menu has been barely altered, although new dishes are frequently added. Until two years ago, one of the original owners could be found behind the counter dishing up his noodles. Recently, he’s been making way for younger chefs who have dedicated themselves to the enduring specialty. It would be futile to guess how many students have put themselves through the university by waiting tables here. Every visit brings a new face eagerly ferrying noodles from the kitchen or countertop to the few tables in the back or the communal table in the front. 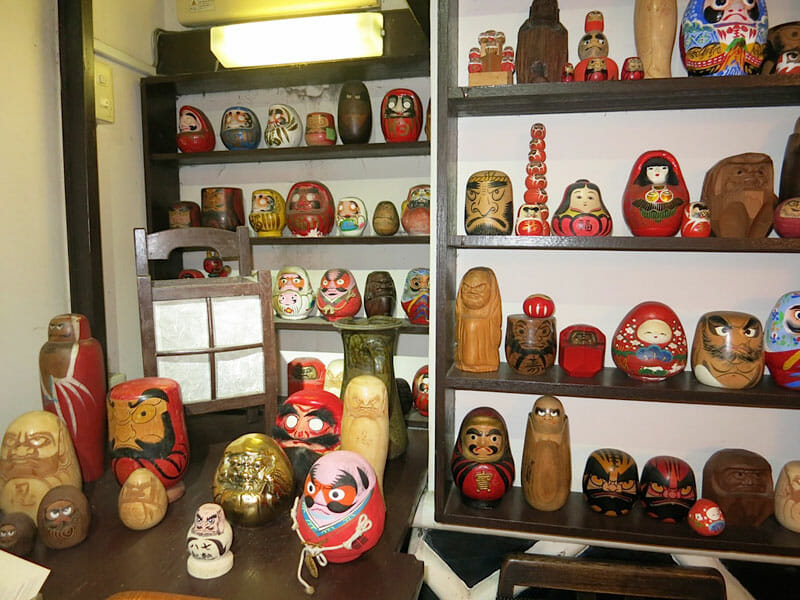 A daruma is a round, Japanese doll resembling Bodhidharma, a 5th- or 6th-century Buddhist monk who not only influenced Japanese Zen Buddhism, but is thought to be the originator of the Shaolin training that later became Shaolin Kung Fu. A daruma is often given as a gift to someone for good luck. The eyes are blank and the recipient is encouraged to fill in one eye and set a goal. When the task is completed, the person is entitled to fill in the other eye. Many Japanese Buddhist temples hold yearly burning ceremonies where one can bring a completed daruma as an act of gratitude for the encouragement. Perhaps the daruma dolls populating the restaurant have encouraged many students to continue at the university.

Daruma’s menu is divided into ramen, fried rice and noodles, with some extras thrown in. We start with the extras because it’s difficult to imagine a visit to Daruma-ya without beginning with either nira-tama – fresh, rich eggs scrambled with garlic chives – or the lightest, fluffiest griddle-fried gyoza dumplings this side of heaven.

The undisputed star of the ramen offerings is takana soba, ramen noodles served with stir-fried takana, a bitterly spicy, leafy Japanese vegetable much like mustard greens. The takana is tossed with bean sprouts, green pepper, bamboo shoots and beef, served on the side so that it can be added to the chewy noodles in increments or all at once, depending on one’s taste. Another popular ramen is Daruma soba served with menma (pickled bamboo), sliced onion, nori seaweed and pork served on the side with the same superb noodles. All items on the menu can be ordered without any meat, nikku nuki, for vegetarians. The same noodles are also served fried (yaki soba) in soft or hard versions with a chop suey of various ingredients lavished on top.

The chahan, or fried rice, is also a star. Lightly sautéed with pork and onion and a generous amount of egg, it is served with a broth-like soup on the side. Curried chahan, takana chahan and chopped veggies with pork and a thickened sauce are also standouts. 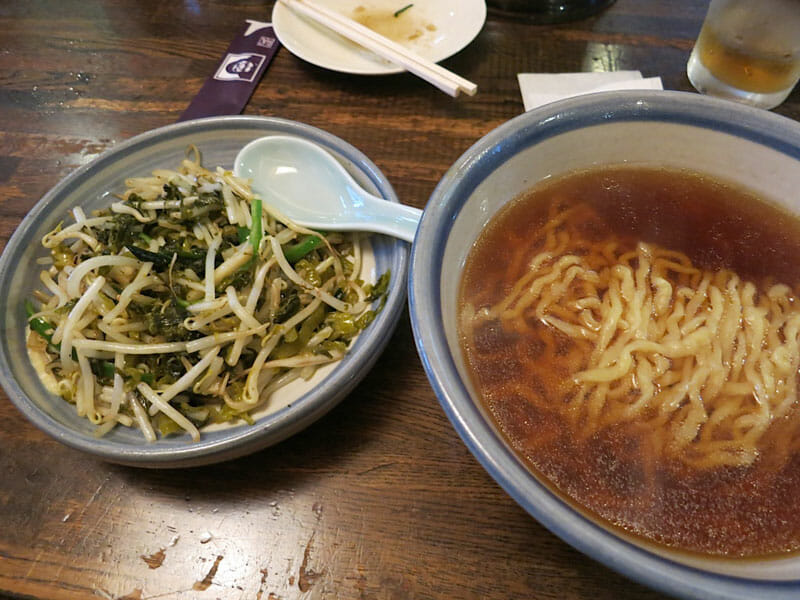 For a larger meal, there are many protein options as side dishes. A salty-sweet mound of Wagyu beef chunks, a hunk of cold tofu with dipping sauce on the side, gizzards with Chinese pickles and a row of pork medallions sautéed with green pepper are all excellent. A side order of simple wok-tossed Asian vegetables can be had with or without pork.

Daruma is happy to supersize the amount of noodles in your dish or add wontons to anything for a nominal charge. There is an English menu as well as pictures of everything they serve on an oversized menu. Most dishes cost between $10 and $15 (the restaurant is cash-only).

During mealtimes there can be a line snaking out the door, but the turnover is rather quick. This is good food, served rapidly. The service is friendly, if not always completely professional – one of Daruma-ya’s charms. To find the restaurant, look for the daruma dolls.

Tokyo | By Fran Kuzui
By Fran Kuzui
TokyoOnce the province of late-night slurping at street carts or standup counters, instant meals and cheap dining, ramen has undergone a renaissance over the last 18 years, making it onto haute hipster tasting menus in the West and creating punishing waits outside the “it” ramen-ya of Tokyo and Osaka. As the New Year began we… 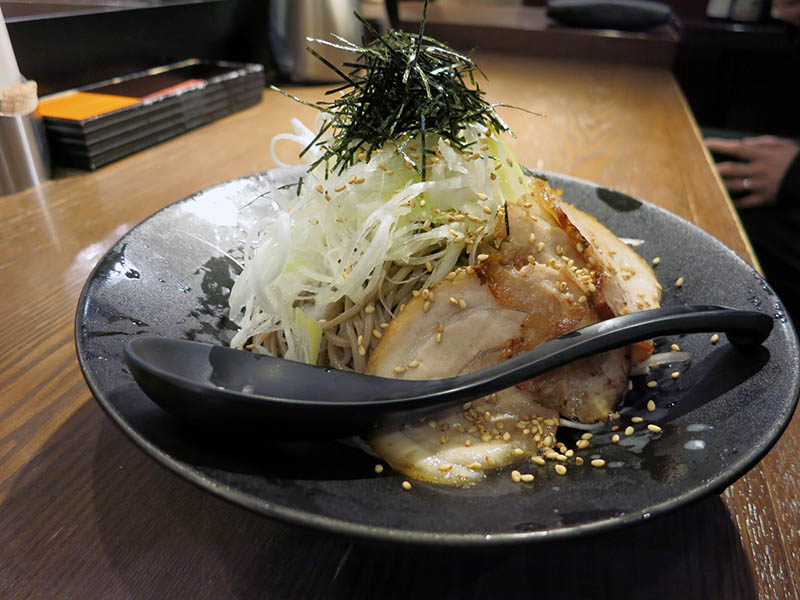 Soba Combo Watanabe: The Other Noodle

Tokyo | By Fran Kuzui
By Fran Kuzui
TokyoWe crept down an almost unmarked flight of stairs, then through a dim, winding corridor and finally pulled back a noren curtain to find ourselves in the world’s only Ippudo ramen location that serves soba noodles instead of ramen. As we seated ourselves on stools around the U-shaped counter, the aroma of tonkotsu (pork bone)…