“You’ve made me look angry,” laughs Marekhi Khatiashvili when we show our drawing of her making traditional Georgian bread in one of the tone bakeries in Tbilisi’s old city.

“You’re concentrating,” I reply. “I was trying to show how hard you work.”

It is incredibly hard work. Marekhi’s day begins at 4:30 a.m., when she and her co-worker Nona Khatiashvili (no relation) start making giant tubs of dough in the back of the low-ceilinged bakery, ready to be baked into the long, flat loaves of bread that Georgians call shoti. It’s a ritual of daily life here. 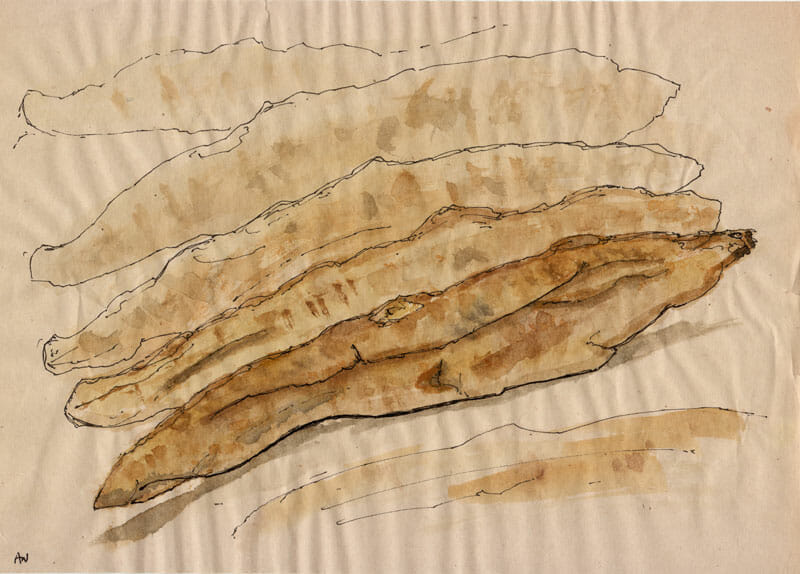 As they turn and press the heavy mix of flour, water, salt and yeast, it is almost up to their elbows. “Everything is done by hand,” says Nona. “That’s the special ingredient.”

The dough is then fashioned into long strips, and at 7 a.m. they bake the first batch in the tone (pronounced “tone-ay”), a circular, brick-lined oven dug into the floor with a gas or wood fire at the bottom. It’s a Georgian version of the tandoor used in many parts of Asia (the words are related, adopted and adapted during the country’s many years under Persian and Ottoman rule).

Leaning over the oven, the women stick the strips of dough to the inside walls. It’s not a job for anyone with a bad back. To reach the lower levels, they bend almost double into the oven, wedging their feet against a metal guard on the floor so they don’t fall in. Even in winter, they are soon sweating in the fierce heat welling up from the tone, which is built inside what used to be a small garage.

A television covered in a thin film of flour dust plays an Indian soap dubbed into Georgian.

The loaves are ready in minutes. With a long-handled hook in one hand and a kind of scraping tool in the other, they deftly prise each piece loose and flip them onto a rack.

And then there’s a customer at the window.

“Do you have any hot?” That’s often all they say.

Nona nods and asks how many he wants. He pays 1.20 Georgian lari (about 50 cents) for two loaves. 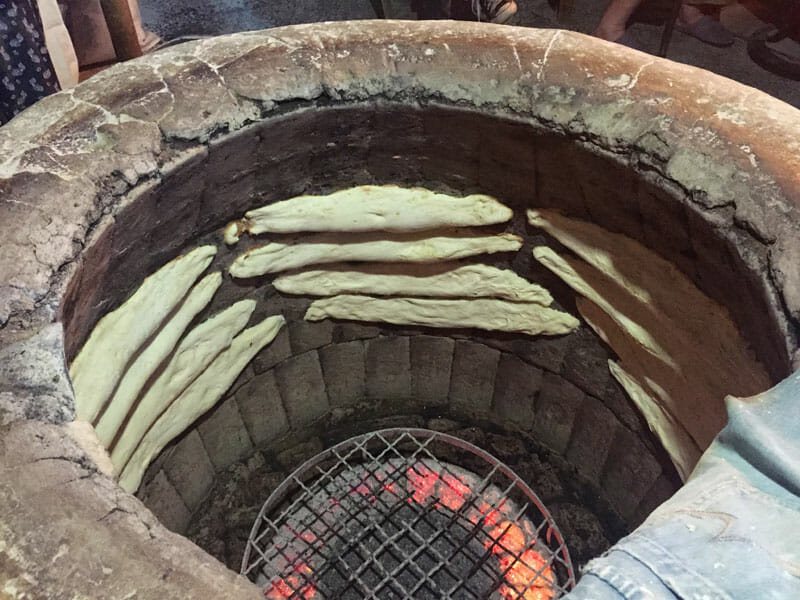 The same scene plays out across the country in thousands of other small, streetside bakeries tucked into basements, corners, front rooms and the spaces in between – the smell of the fresh shoti dangling temptingly in the air outside.

Relatives and friends often stop by, bringing children with them. With warm bread also comes hot gossip. Tone bakeries know most of their regular customers, so they are often the local news agency.

But it’s relentless toil. Over several hours, I watch the rhythm of Georgian bread-making unfold, trying to keep up on my sketchpad. And they’ll be at it until 9 p.m. each night. But except when she is leaning over the oven, Marekhi keeps up a constant flow of jokes and banter. 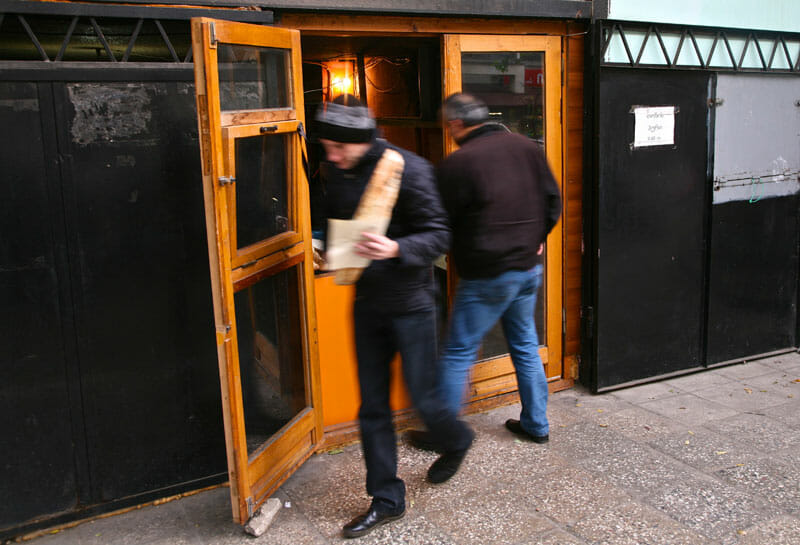 They make an average of 600 loaves a day, many more on holidays. Three women work there in all, and they each do two weeks solid and then have a week off, returning to their homes in eastern Georgia.

“It’s a hard job,” they both agree, especially in summer when temperatures reach nearly 40C (about 104F). But they say they earn far more here than if they stayed in their home villages.

“This is blessed job,” says Nona. “Like wine, bread is a gift from God.”

And then there’s another voice at the window:

The tone bakery is located on Amaghleba Street, just past the turn to Gergeti Street, in Sololaki.

This article was originally published on November 23, 2015, and was the first installment in our Tbilisi Sketches series, with illustrated dispatches covering local spots in Georgia’s capital. Contributor Andrew North is an artist and journalist based in Tbilisi who spent many years before that reporting from the Middle East and Asia.