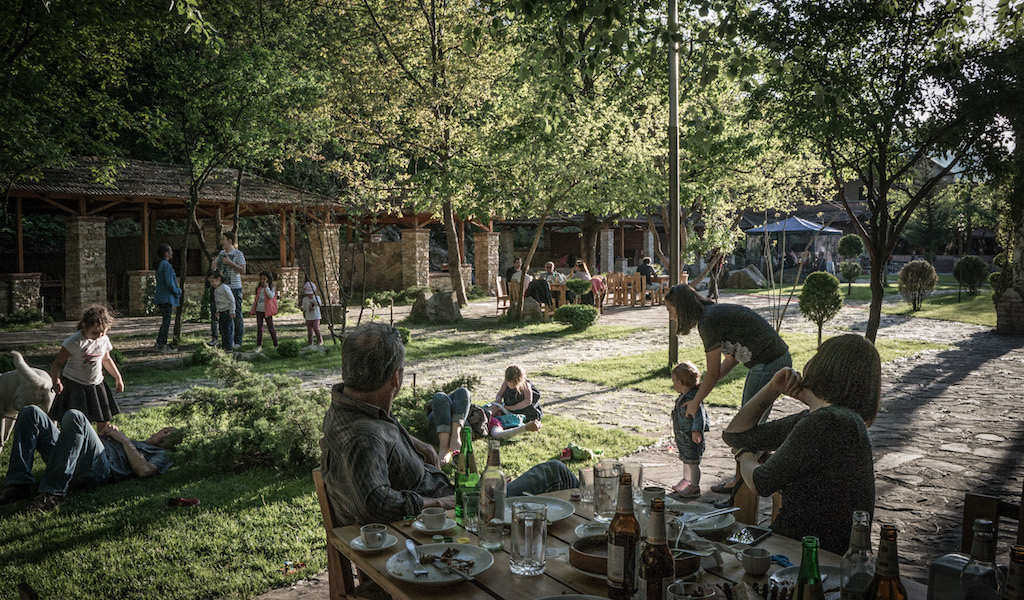 Summer in Tbilisi means sweet and sour cherries, plums, apricots, peaches, fresh figs, watermelons and, most importantly, tomatoes that taste the way God intended them to. It’s a season bursting with flavors – but there’s a hitch. Tbilisi summers are oppressively hot and humid, the thick, gritty city air leaves a mucky film on the roof of your mouth, stifling your appetite and keeping you out of your favorite local eateries. Everyone evacuates the capital in the summer, and if we can’t manage to get out of town for weeks on end, we can at least drive 15 minutes to spend an afternoon at Armazis Kheoba for some lungfuls of fresh air and beef liver mtsvadi.

Armazis Kheoba is tucked in a steep gorge along the southern bank of the Mtkvari River in the village of Armazi, a few kilometers west of Georgia’s ancient capital of Mtskheta. It is a quiet, beguiling stretch of deep green topography with a history that goes back to pre-Christianity: Armazi, named after an ancient pagan god, was a royal citadel that fell in the 8th century when Arab invaders razed it to the ground. Today, it’s a nondescript little village strung along the banks of the river that you would overlook if not for the handful of restaurants scattered between the huge riverside beeches and cottonwoods. 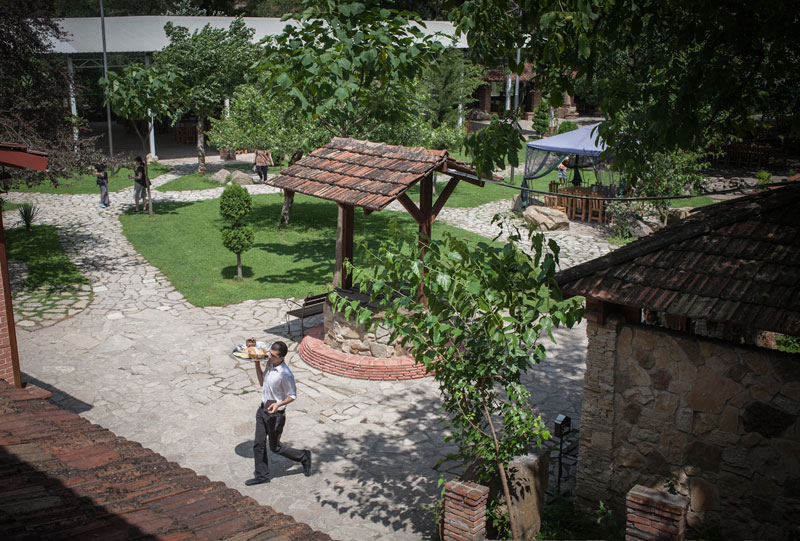 The restaurant’s history goes back to August 2008. Owner Gaga Makarashvili was putting the final touches on it when Russians bombed Gori and invaded Georgia. As they advanced some 15 kilometers from Mtsketa, many people fled to Tbilisi, but Makarashvili stayed on and continued working with a jittery determination. Armazis Kheoba officially opened on September 25, 2008, with a wedding party, although Russians were still occupying villages in a “buffer zone” around South Ossetia.

In fact, it was a wedding party two years to the day of its opening that first brought us here. Aesthetic landscaping not only makes it an idyllic place for a wedding reception, but it is also an ideal spot to unleash your kids and let them run hog wild as you sip – or gulp, as the case may be – the house wine, made from local indigenous Chinuri grapes at the Makarashvilis’ nearby vineyard. Georgian restaurants are by nature “family restaurants,” some more child-friendly than others (read: cigarette smoke), but Armazis Kheoba feels more like a park that serves really good food; even dogs are judiciously welcomed.

Armazis Kheoba is not a typical gastronomic experience. It’s a holiday.

The presence of a Kakhetian chef assures a menu heavy on the barbecue, with mtsvadi asorti – an assortment of various skewered meats arranged teepee-style on your table – a house specialty. Not everyone offers liver mtsvadi, and no one we’ve come across inserts the chunks of liver in natural sausage casing before roasting over the coals, which adds a smoky, piquant layer of flavor to the meat. The oven-roasted veal chops, smothered in adjika, a fierce red pepper paste, are also a must-order.

Yet even if the smell of pork broiling over wood coals is not your thing, there are plenty of vegetable dishes that will rock your taste buds, like pkhali, which is generally a leafy vegetable like spinach or beet greens ground into a paste with walnuts, garlic, onions and vinegar. Pkhali is one of those things that is ordered out of habit and is often the one dish that is always left behind on the table when everything else has been licked clean. Usually, it’s the vinegar that’s to blame or an absence of spice. Other times it’s the lack of freshness. Whatever the case, it all boils down to a lack of heart. Armazis Kheoba puts the same care into its pkhali as it does into ensuring the mtsvadi is neither under- nor overcooked. The leek pkhali, in particular, is worth writing home about, as is their eggplant stuffed with walnuts (we ordered two of those). 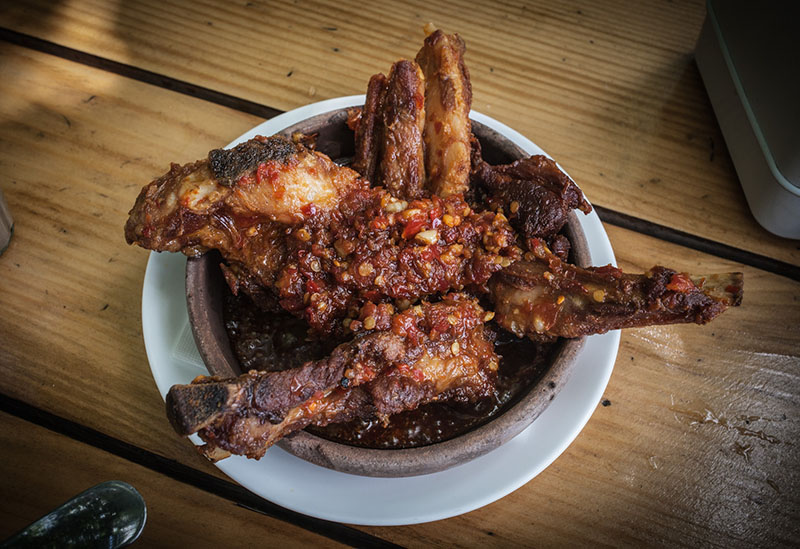 Tkemali is a sour green plum sauce Georgians use the way Americans use ketchup. It’s a dipping sauce people put on eggs, potatoes and roasted meat, while others, like our daughter, love it on khachapuri – cheese pie. Armazis Kheoba takes special pride in its tkemali, which is made from plums grown on the premises.

Armazis Kheoba is not a typical gastronomic experience. It’s a holiday. You arrive in the afternoon, and before you know it, it’s seven o’clock, and a Tbilisi folk band steps on the stage to perform traditional songs under the big pavilion. The kids know what’s cool and are the first to dance. Then the wine begins to loosen the legs of the adults and, wedding or not, we’re all on the dance floor working off the calories we have just consumed. Then the band takes a break, and we get back to our tables to nibble on whatever is left on our plates and order more wine.

Tbilisi | By Paul Rimple
By Paul Rimple
Tbilisi -- Summer in Tbilisi means sweet and sour cherries, plums, apricots, peaches, fresh figs, watermelons and, most importantly, tomatoes that taste the way God intended them to. It’s a season bursting with flavors – but there’s a hitch. Tbilisi summers are oppressively hot and humid, the thick, gritty city air leaves a mucky film… 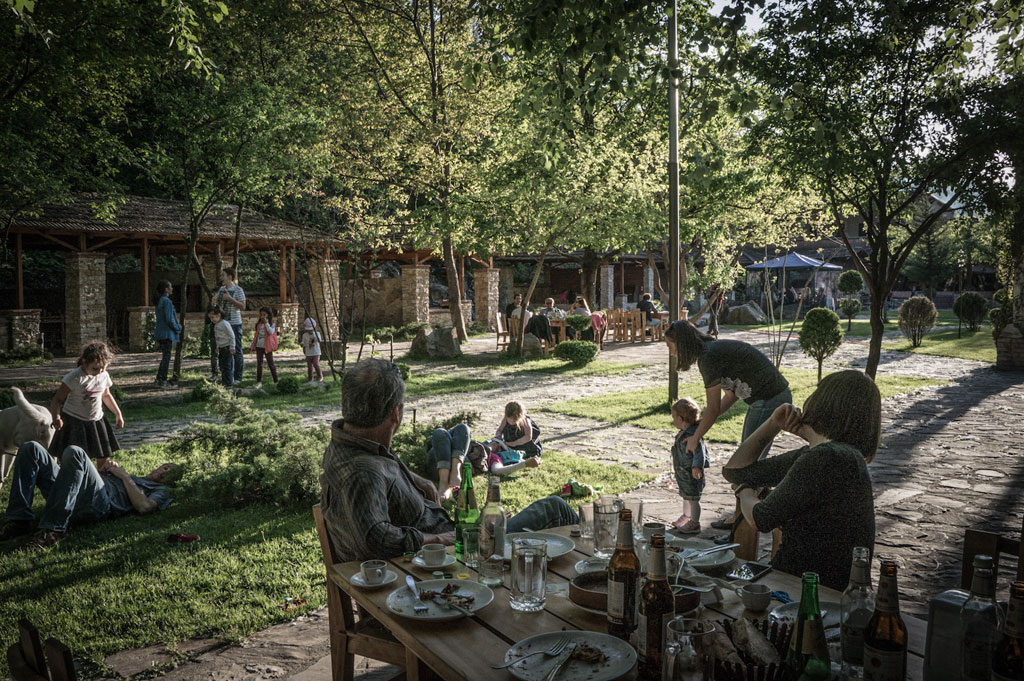 Tbilisi | By Paul Rimple
By Paul Rimple
Tbilisi -- Summer in Tbilisi means sweet and sour cherries, plums, apricots, peaches, fresh figs, watermelons and, most importantly, tomatoes that taste the way God intended them to. It’s a season bursting with flavors – but there’s a hitch. Tbilisi summers are oppressively hot and humid, the thick, gritty city air leaves a mucky film… 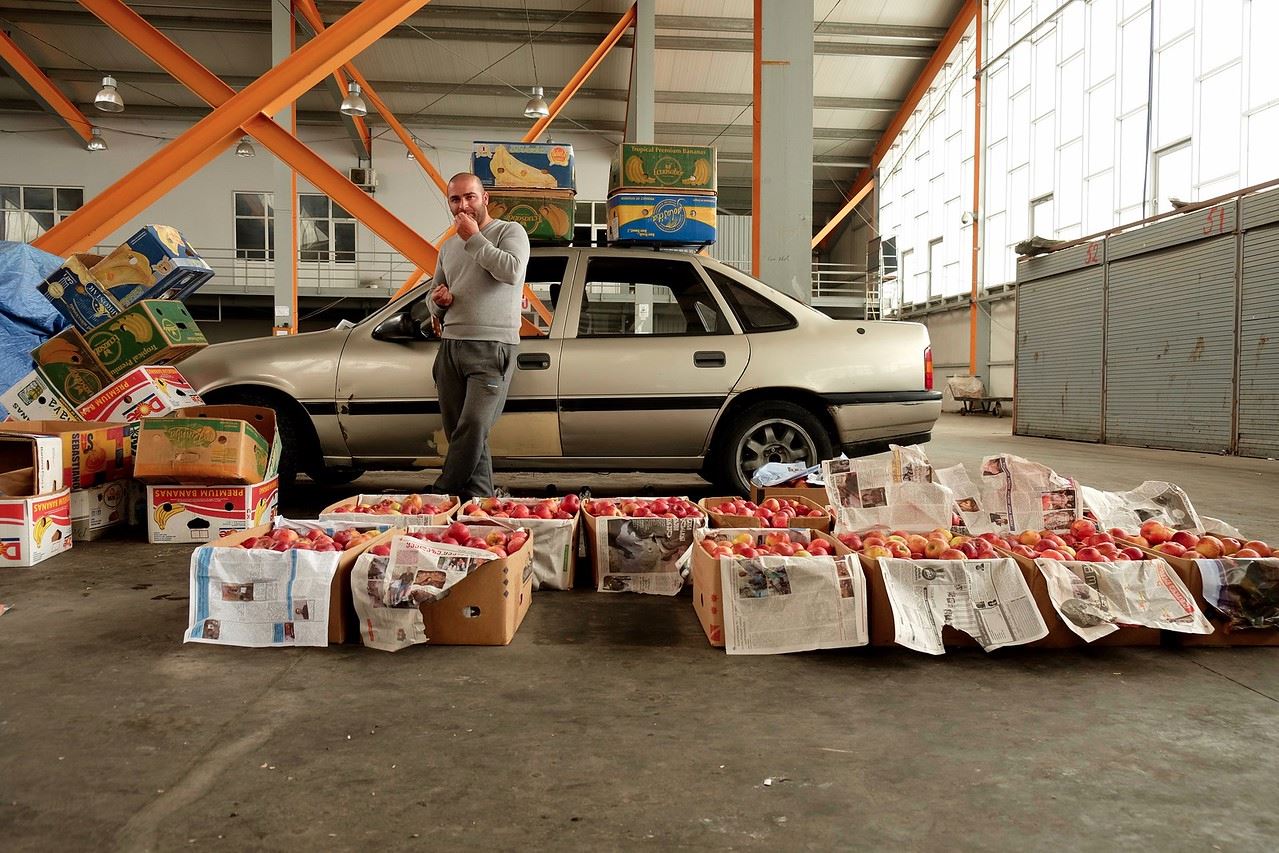 Tbilisi | By Paul Rimple
By Paul Rimple
Tbilisi -- Boxes of apples about to be put for sale at a kiosk at Tbilisi's Deserter's Bazaar, which is packed with interesting and tasty wares and is the focal point of our walk in the city. (Photo courtesy of David Greenfield)