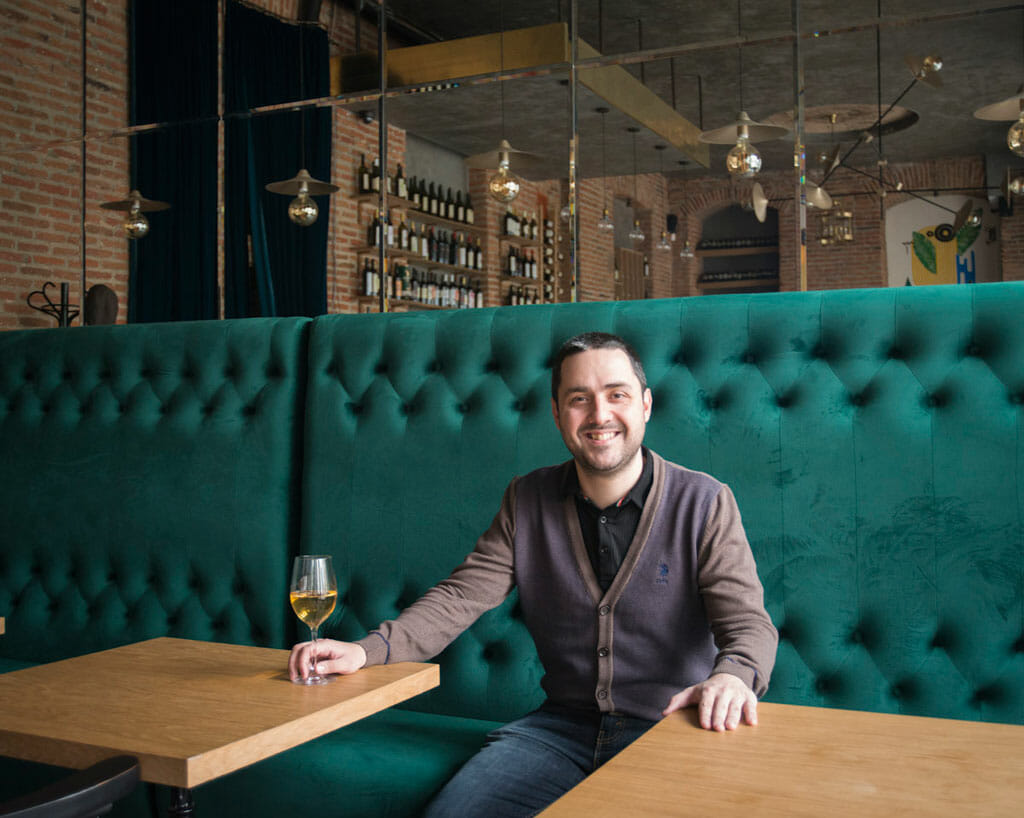 On the left bank of Tbilisi’s Mtkvari River in the Plekhanov district is David Aghmashenebeli Avenue, a thoroughfare long associated with wallet-friendly Turkish restaurants and discount clothing boutiques.

Some 15 years ago, the crumbling 19th-century buildings and huge eucalyptus trees that lined the street were crowded with people hawking everything from wooden utensils to costume jewelry, fresh produce and coffee beans labeled “Nescafé.” It was a congested, lively sidewalk bazaar of sorts that exemplified the Asiatic spirit of Tbilisi. However, a massive urban renewal project in 2011 put an end to the colorful disorder.

Today, most of Aghmashenebeli is a sensible European-looking boulevard that the former President of Georgia likened to Paris, although the Turkish restaurants are still there serving up tasty Anatolian specialties. Down at the end of the street, the city recently unveiled the latest addition to the rehab project: a three-block pedestrian-only stretch of former second-hand-clothes shops, wedding dressmakers and hole-in-the-wall markets.

It’s a strip full of promise, as various cafes and eateries are beginning to open their doors. One joint in particular that is already establishing itself as one of Tbilisi’s coolest hangouts is Amber Bar, a large, open brick-walled room packed with good vibes and excellent wine.

One would think that in the land that gave birth to winemaking 8,000 years ago, there would be a wine bar on every corner, but in this city of over 1 million, you can count the wine bars on one hand. Blame it on the ritualistic nature of wine consumption: you drink wine only with an accompanying supper and by the carafe, not by the glass – toast after toast after toast at a table overflowing with plates of exquisite specialties.

There are rules. Every table has a tamada, which loosely translates to “toastmaster,” although “table dictator” might be more accurate. You can only drink when the tamada makes a toast, in which case men are expected to follow his lead and drain the glass to the bottom (women are exempted from this convention). There is no sipping at a traditional Georgian dinner table, whether you are at a private dinner or restaurant.

It is a custom that certainly has its charm, but things can get pretty surreal at a dinner table, particularly when the tamada takes the family kantsi (drinking horn) from its cherished pedestal and fills it with wine. Some kantsis have a capacity of a liter or more, and once you start guzzling, you can’t take a break and set it on the table, even if protocol allowed – it’s a horn. 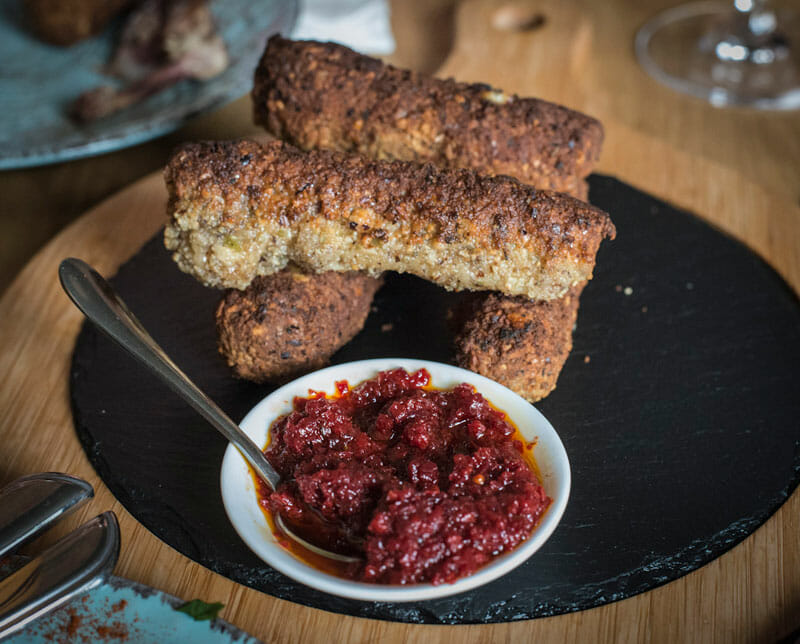 Sandro Kiknadze, the 36-year-old co-owner of Amber Bar, is one of a growing number of young Georgians who respect their traditions, yet believe that while chug-a-lugging wine might be a fun way to enjoy yourself, it’s not the best way to relish the bouquet. An avid wine lover, Kiknadze opened his bar so other like-minded folks could kick back and enjoy excellent wine without having to indulge in the customary theater of Georgian bacchanalia.

“It’s a new thing for Georgians to drink bottled wine,” Kiknadze says. “But more people are drinking by the bottle instead of 10-liter plastic jugs.”

We have popped open a 2014 Chinuri made by the Gotsa family. It takes a conscientious effort not to knock back a deep pull as is done in any of the Kartli villages in central Georgia where the grape is native. But unlike the village Chinuri we are familiar with, Gotsa’s is subtler with a light nutty flavor. You can taste the extra effort the family puts into the entire process, from caring for the vine to fermenting and storing the wine in the huge ceramic kvevri, which are buried in the ground.

Gotsa and most of the other 70 winemakers featured at Amber Bar make wine using the traditional method, with no pesticides on the grapes or additives in the wine. “I can say we are in love with natural wines,” Kiknadze affirms with a smile.

Amber gets its name from the color of Georgian white wine, a result of fermenting the entire grape instead of only the juice, as is largely done in the West. For some, the extra tannins in amber wine can be off-putting, while others cannot imagine life without it. Once you get a taste for natural wine, it’s hard to drink anything else.

The menu at the bar was designed with wine in mind. The chef, 22-year-old Tedo Dzishkarian is a former wrestling champion who tapped into his palate and studied the culinary arts at Georgia’s only certified cooking school, located at the Free University. His repertoire, mostly appetizers, is fun and sensible.

Dzishkarian has deconstructed lobiani (bean pie) by turning it into bean dip with thin bread, a simple and effective Georgian hors d’oeuvre. Sulguni (brined cheese) sticks are fried in a crushed walnut crust and served with a homemade adjika (pepper paste) that is surprisingly not salty and low octane, yet still releases layers of deep smoky flavors. Bruschetta with pear, walnut and blue cheese and with homemade cream cheese, prosciutto and fig jam are winners, while the Imeretian kupati is an exceptional appetite vanquisher. No heavy viscera here, this sausage is stuffed with ground pork and is a perfect accompaniment to the 2015 Petriaant Marani Saperavi. 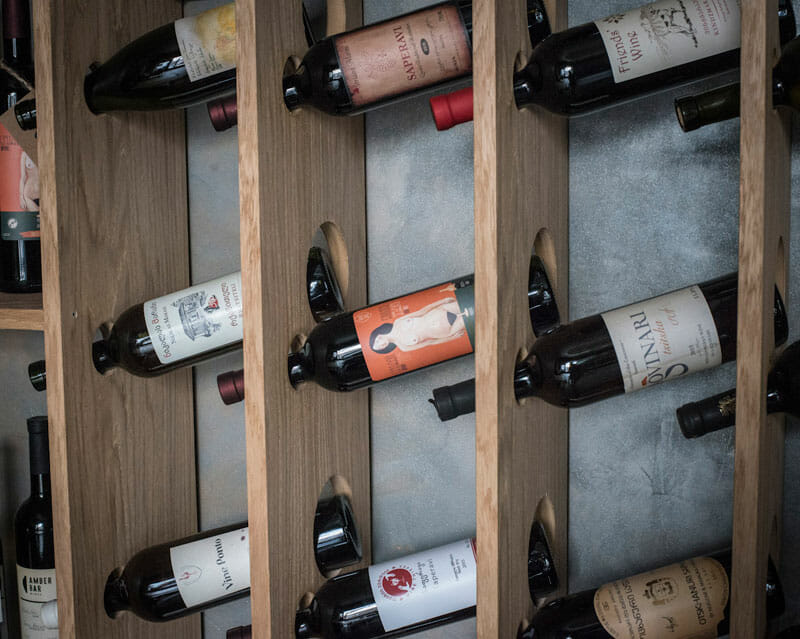 Beaming with the enthusiasm of a man who realizes he is making his dream come true, Kiknadze explains how he wants his bar to be a place where people come for a “wine experience.” It is a phrase we hear from other wine lovers who understand that wine is as much about feeling and participation as it is about taste. And with a bottle of house wine at 12 lari (US$5) a bottle, anyone can take part. 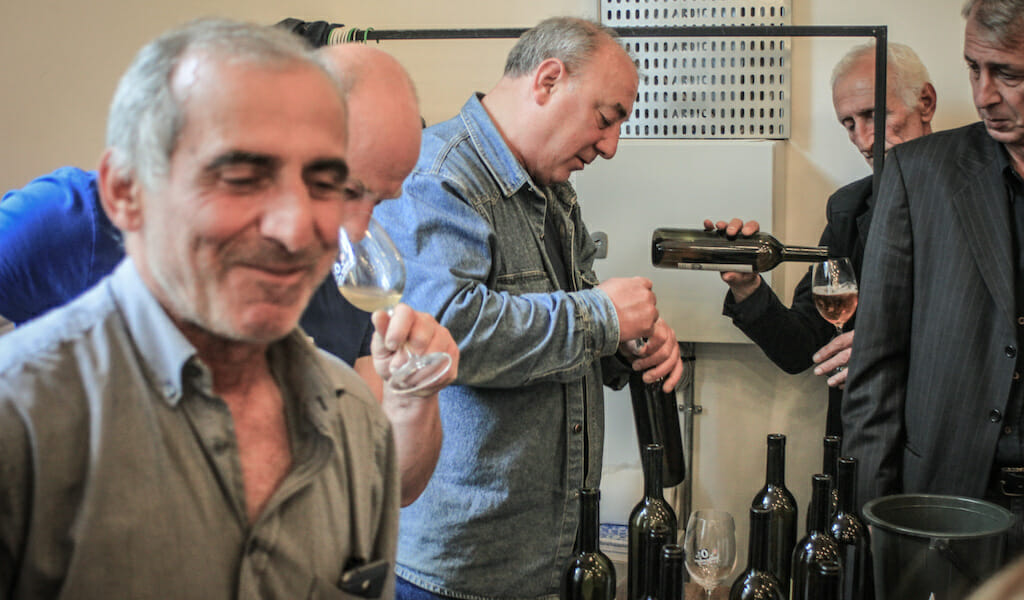