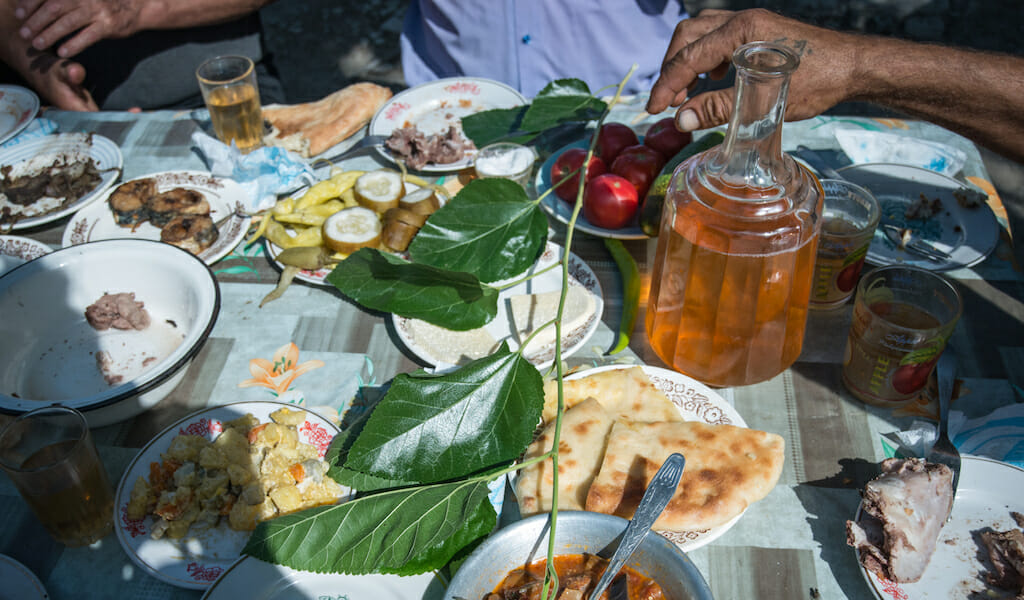 Feasting in Garikula: Summer Days and Nights in a Sleepy Georgian Village

The table was a motif of fresh delights we had never seen before, all the ingredients from the family garden. In due time we would learn about pkhali, chicken tsatsivi and the intrepid Georgian ratatouille, ajapsandali; however, the only thing on our minds was surviving the barrage of toasts our host Aleko was pummeling us with.

In Georgia guests are considered gifts from God, though it was clear from the beginning that the god Aleko had in mind was Bacchus. If we failed to drain the water glass full of his wine to the bottom, he would refill it and force us to do the toast right a second time.

It was our first week in Georgia, 16 years ago, and quite a blurry one at that. One day we were nursing our first Georgian hangover at a flotilla bar in the middle of the huge Tbilisi reservoir when we met the deeply beautiful Anna, and the next day we were pounding wine with her at our first supra (feast) at Aleko’s home in Garikula, a humble village an hour west of Tbilisi that put us under its spell. 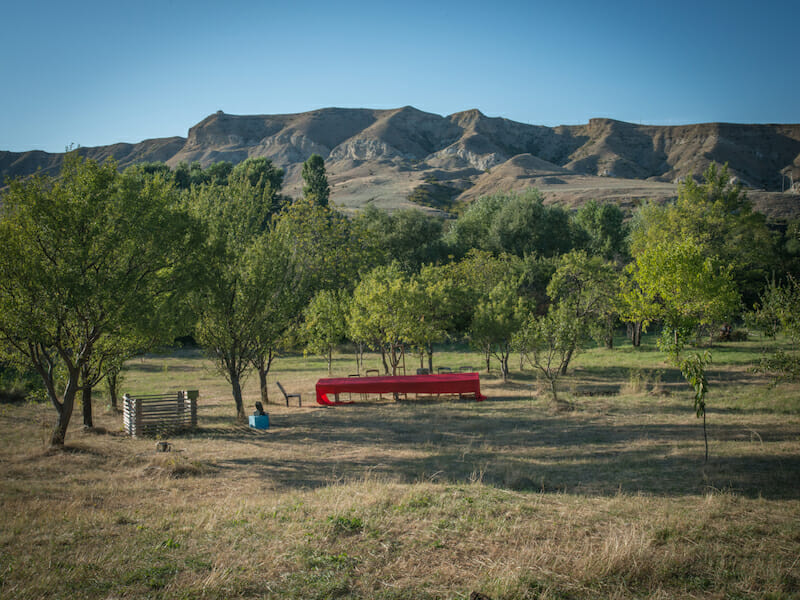 Hundreds of supras and thousands of liters of wine later we have returned to Garikula, drawn by the sweetness of its air, the warmth of its tranquility and the inspiration it arouses. Only this time, we are at our own little village house, eating and drinking on our terms. The blossoming weeds in our garden and the pile of unstacked wood make it pretty obvious we are from the city, but it’s our first summer here and we’re just getting into the groove.

Garikula is one of many villages scattered like chicken feed in Shida Kartli’s Kaspi region, an area with a history that reaches as far back as the Stone Age. Excavations in 2015 revealed 3000-year-old inscriptions in an unknown language, making it one of the oldest known pieces of writing in the world. During medieval times the region was the epicenter of conflict between the Ottomans, Persians and Georgians. Although the Bolsheviks blew up most of the old palaces of Georgian noble families, a few still stand in Garikula and neighboring Akhalkalaki, including the Tarkhan-Mouravi’s home, which is adorned with 19th-century Persian frescoes.

Shida Kartli (known simply as “Kartli”) is a vast rolling plain that creeps up to the feet of the Lesser Caucasus in the south and fades into the Greater Caucasus to the north. This is one of Georgia’s main winemaking regions, famous for Chinuri, Tavkveri, Shavkapito and sparkling wine. It is also fertile ground for apple, peach, plum and pear trees. A few hundred meters from our house is the sympathetic Tedzami River, its valley always providing a breeze to break the summer heat. 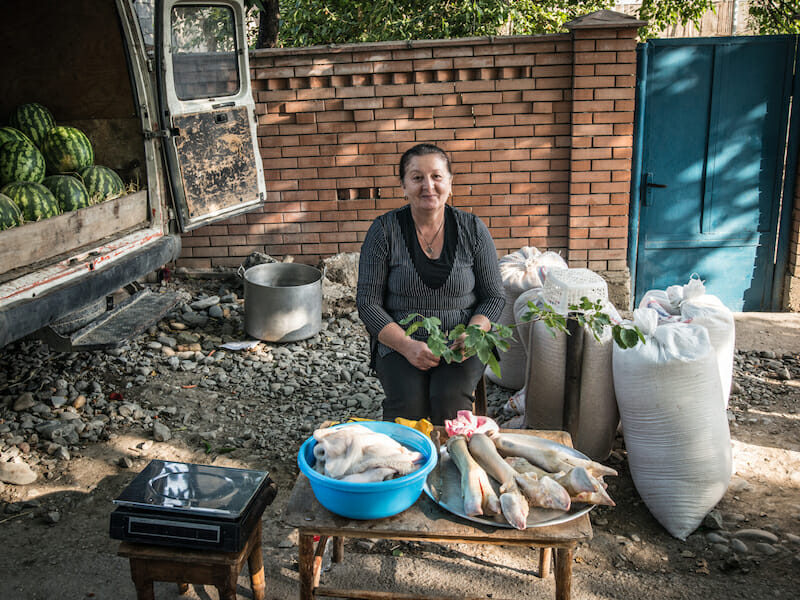 The first thing we did after staking off our territory was to seek a reliable source for wine. Kartli once provided wine for the kings, but Soviet occupation destroyed many of the wine cellars and vineyards, and ravaged the work ethic, too. There is plenty of wine in the village, but the trick is finding the good stuff. Some families actually add sugar to stretch their yield, a bad habit picked up during the Communist era.

Levan has a gorgeous 18th-century marani (wine cellar) whose huge kvevri (terra cotta storing vessels) survived destruction yet remain empty because the family doesn’t have enough grapes to fill the 1,000-liter pots. His barrel wine is raw, oxidized village brew. Sometimes we buy wine from him just to hang out in his marani.

When Goga’s fifth toast was hoisted for Stalin, we knocked our glasses back only halfway, then weaseled our way out of there.

Goga is a hard-working sexagenarian with a well-kept trellised vineyard. He sold us Chinuri and Shavkapito vines for our garden. After we loaded our car, he invited us for a “taste” of his wine that he ferments in a steel basin and stores in glass demijohns. Goga set the table with a basket of plain white bread, pickled green tomatoes and pungent Kartli cheese. Made from cow’s milk, it is aged a bit longer and often saltier than its Imeretian counterpart. He filled water glasses with wine that was made to be chugged – and quaff we did – but when his fifth toast was hoisted for Stalin, we knocked them back only halfway, then weaseled our way out of there and haven’t returned since. 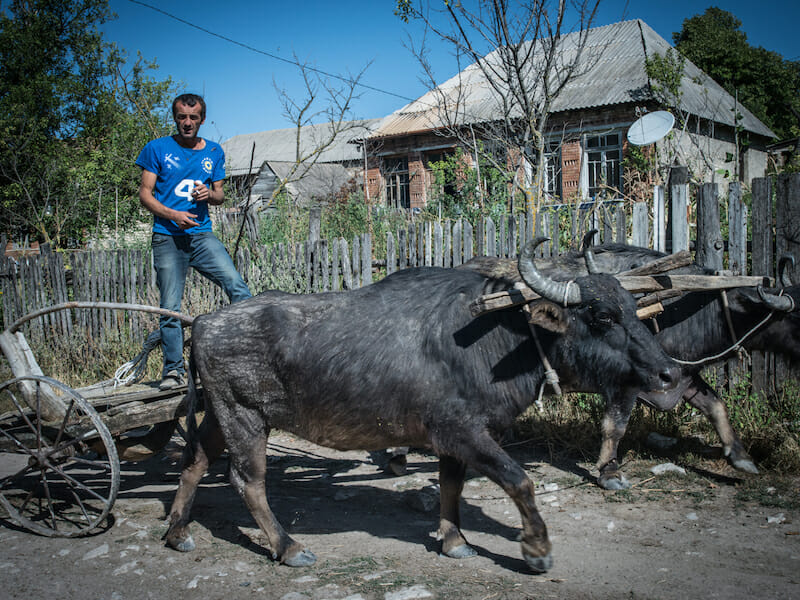 Goga’s neighbor Tariel rolls his eyes when we mention Goga’s wine. He’s been hauling bales of hay up to his cowshed and is shirtless, his name crudely tattooed on his shoulder. We are sitting on old wooden benches under a canopy of young, healthy Chinuri grapes, a dozen chickens pecking the baked August earth at our feet. His wife’s cheese, soaking in a pot of water on the table, is nearly ready while a stew of chakapuli – veal, tarragon, sour plums and white wine – simmers on the outdoor stove. He had been waiting weeks for his son to arrive from Gori before cracking open a demijohn of Chinuri that we too could dip into. So far, it is the tastiest vintage we’ve found in Garikula, even if it comes in an old two-liter plastic beer bottle.

The closest restaurant is about 20 kilometers away. In Garikula, we eat at home and shop locally. Several little markets offer the basics: candy, beer, sausages, butter and whatnot, while a few people set out a few crates of locally grown tomatoes, watermelons, cucumbers and onions on the side of the road, depending on the season.

In the absence of signs, butchers hang cow tails, hooves or intestines covered in flies on a hook by the door. Although you can find pork, Kartli is beef country, most of which was munching grass just a day before getting hacked into obscene cuts of “steak” with an axe. One local butcher uses a kindjal, a Caucasian double-edged dagger, for refined butchering. There is no tradition of dry-aging their meat, so it tends to be pretty tough stuff, suitable for stewing. 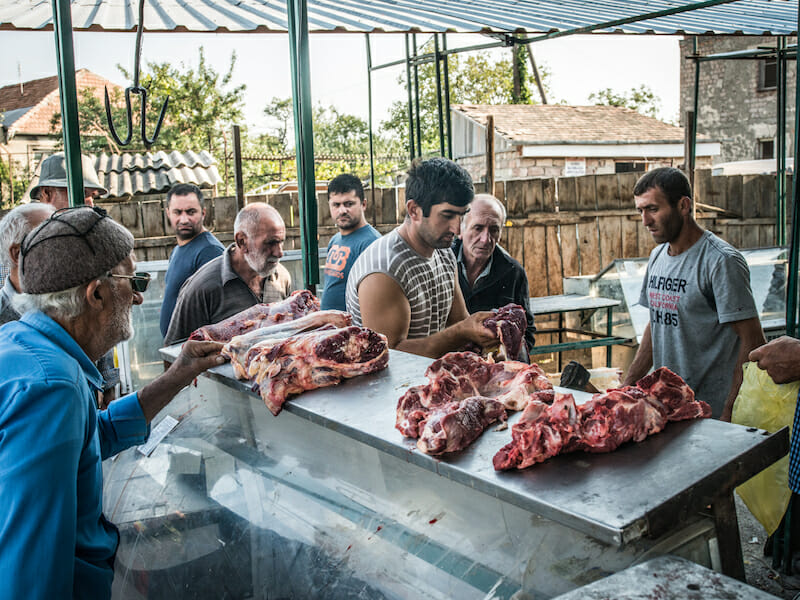 A couple tones (traditional tandoori-like ovens) bake superb bread and a conventional baker makes delicious “Greek bread.” Nobody knows why it’s called Greek, not even the baker – he just bought the bakery and continued with the recipe. But a community of Greeks did live nearby long ago; their legacy can be found in the style of headstones at the local cemeteries. All we know is that this fluffy, flat, rectangular bread is brushed in cooking oil before baking, and it is only found here in Garikula.

The serious shopping happens every Sunday when residents from the surrounding villages converge on a little side street to trade locally grown produce and products at the “bazaar.” This organic medieval-like emporium opens at sunrise and is the best place to buy honey by the kilo, fresh eggs, cheese and the invigorating sour yogurt, matzoni. Need rabbits, chickens, goats, sheep, farming tools and used clothing? It’s all here, you just have to make it before 11 a.m., when the market closes.

Last Sunday, while loitering next to a display of pathetic taxidermied birds, we bumped into our neighbor Zakhar. The brawny, pot-bellied 70-year-old has mighty hands as course as oak bark and had been catching up on gossip with a childhood friend when he stopped us with a bellowing “Haw!” Zakhar professes to be a khinkali master and we are eager to put him to the test at out house soon.

Village life builds a hearty appetite and nothing beats having friends around your table decorated in succulent edibles and carafes of wine. While our garden hasn’t yet contributed to the bounty, the rest of Garikula certainly has. And the best part about it is that the supra has only begun.