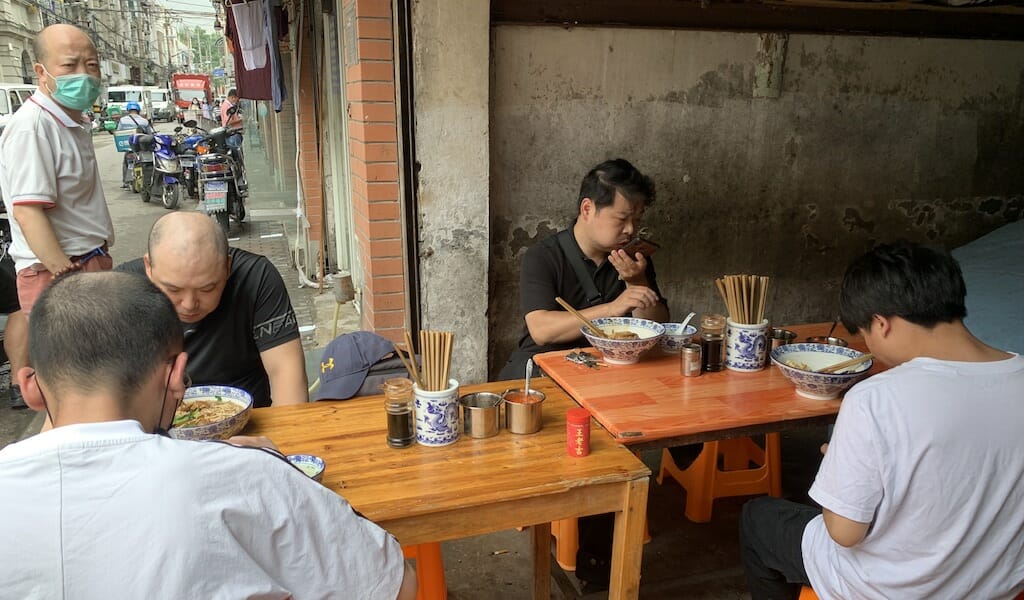 Over the past decade, it’s become increasingly difficult to find mom-and-pop-owned restaurants that serve Shanghainese classics. The local homestyle cuisine, a sub-brand of Shanghainese known as 本帮菜 (benbangcai), is often elevated and served in fine-dining environments, thanks to the city’s place as the economic capital of the country and the wealthy Shanghainese who benefit from their hometown’s prosperity. But occasionally you can still discover new hidden gems tucked away down the city’s backstreets.

So when we hear about a spot we haven’t tried before, we are all ears. Like when our coworker Kelvin Ip told us about his favorite Shanghainese hole-in-the-wall just a couple blocks from the Bund. Located just around the corner from his old office and next to two of the city’s most amazing art deco former banks, the shop is owned by a multi-generational family of wonton makers with a penchant for making amazing noodles. 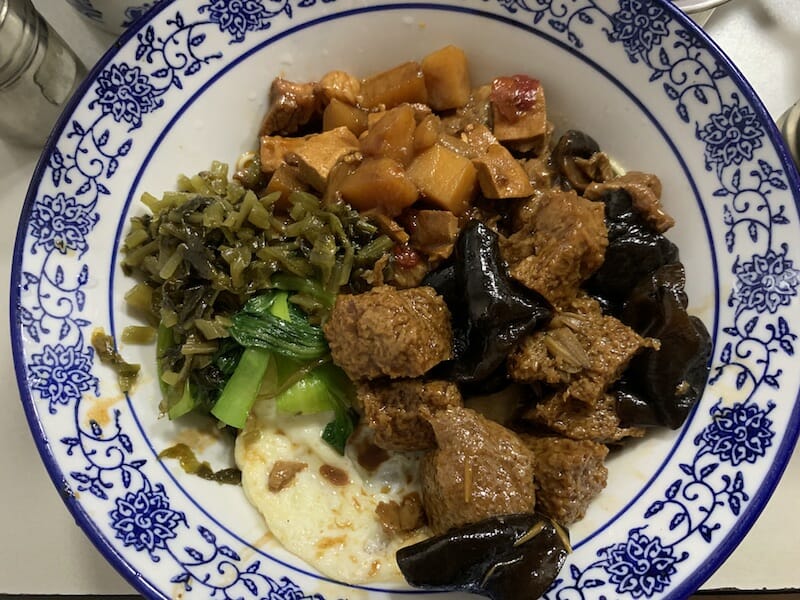 Like the family who owns it, the stall has expanded over the years, starting as one storefront, then taking over another shop next door. Now they rent out two garages that they turn into temporary dining rooms with folding tables and stools to accommodate the lunch rush. Due to the coronavirus crisis, the main dining room and the kitchen were recently renovated – part of the local government’s attempt to upgrade some of the more hole-in-the-wall joints to ensure the whole city’s dining scene is up to code.

Like the family who owns it, the stall has expanded over the years

Now you can find at least two generations there at any one time. The matriarch shows diners to their tables, while her daughter takes orders and directs the fast-moving, open kitchen where there are at least three busy workers, usually led by the son. He boils the wontons and noodles, while the daughter’s husband splashes in the broth for customers that order theirs in soup, and an auntie places the toppings on each bowl before handing it to a runner who delivers it to your table. 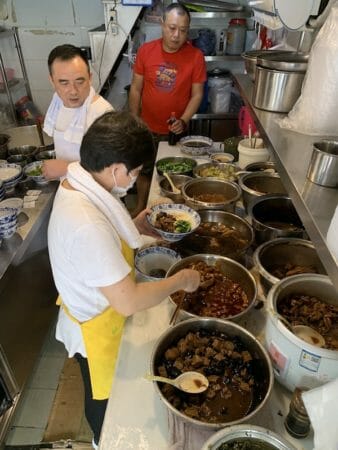 In typical Shanghainese fashion, the family here takes care of their own. If you become a regular, you can ask them to add just one of their famous wontons to your bowl of noodles. Stuffed with the classic local combo of shepherd’s purse and pork, the dumplings are the size of a meaty toddler’s fist, so one on top of a heaping bowl of noodles will be more than enough for even the hungriest diner. Regulars get escorted to better seats, and the daughter has a memory for people’s orders that would impress an elephant. She knows our coworker’s order so well (dry noodles with intestines, fried egg, shiitake mushrooms, bok choy and minced pork) that you can just go and ask for Kelvin’s usual: 小叶老样子 (xiǎoyè lǎo yàngzi).

Kelvin thought that was impressive for years, until he saw the grandma recognize a couple of childhood sweethearts who had grown up in the neighborhood and were returning, older and married, to their former favorite noodle joint. Not only did she remember them (to their surprise), she then repeated their childhood orders verbatim before they could make them. Now that’s service. 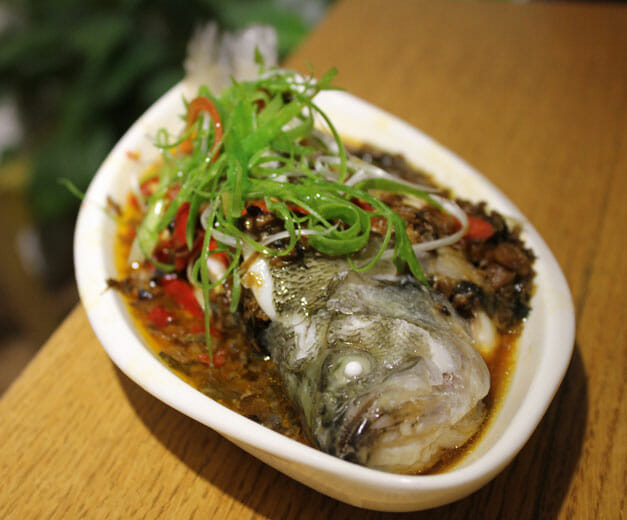 Shanghai | By Jamie Barys
By Jamie Barys
ShanghaiShanghai offers a huge range of dining at every price point imaginable. Fortunately for us, cost is not necessarily commensurate with quality in this town; you don’t have to break the bank to eat well. In fact, some of our favorite eateries offer bargain set lunches. Mi Xiang Yuan Hidden down an alley, Mi Xiang… 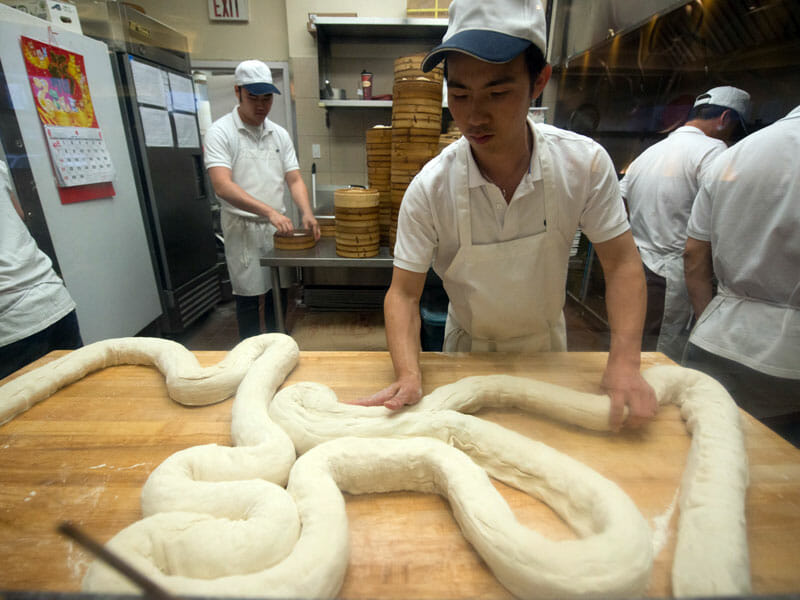 Diaspora Dining: A Taste of Shanghai in Toronto

Toronto | By Gizelle Lau
By Gizelle Lau
TorontoEditor’s note: This feature, by guest contributor Gizelle Lau – a Chinese-Canadian food and travel writer based in Toronto – is the first in an occasional series on “diaspora dining,” covering the best places to find our favorite cuisines outside of their places of origin. The history of Chinese in Canada – pioneers who left…
San Lin Tang Wontons
416 Jiangxi Middle Rd, near Beijing East Rd
江西中路416号近北京东路
Tel. +86 135 2472 3512
Hours: 6:30am-3pm (or until they sell out, which is usually by 2pm)