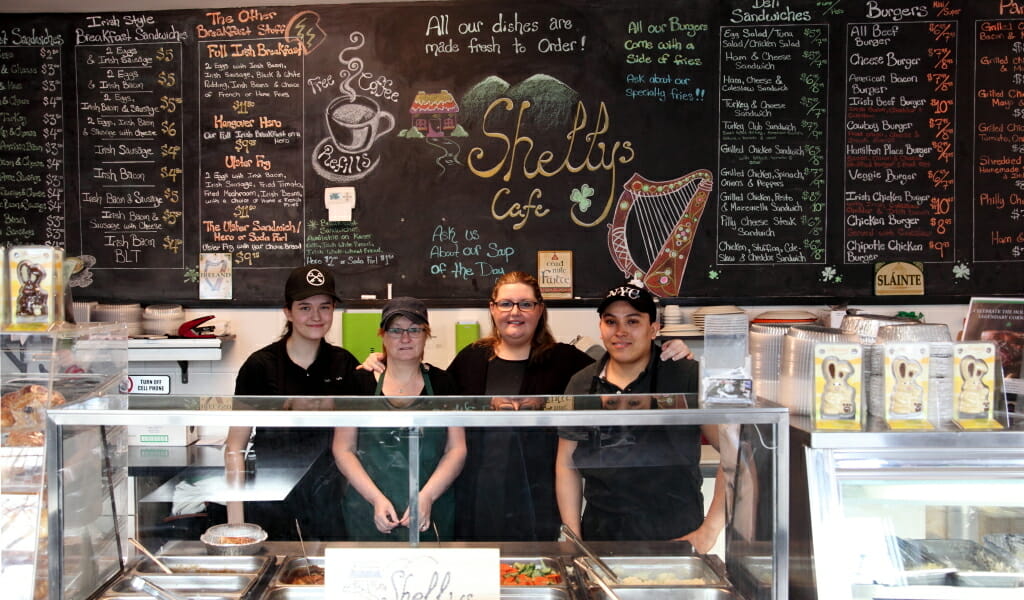 Shelly’s Café: Pluck of the Irish

To her friends, Michelle Boyce, the owner of Shelly’s Café, is “Michelle.” That was the name called out by many customers, when arriving or departing, as we sat and talked in her sunny dining area on a recent afternoon.

She is, to be sure, also “Shelly,” a diminutive bestowed on her by her mom in Newry, County Down, one of six counties that form Northern Ireland. Years later and an ocean away from that childhood home – Michelle left Newry for New York as a young adult in 2010 – she told us of her continuing “passion to recreate my mom’s home cooking.” In that sense, the name “Shelly’s Café” evokes both mother and daughter.

Michelle took a series of food-service jobs, in purchasing as well as food preparation. One of them was at a deli-restaurant so small that it offered only a single table – it was there she met the man who would become both her husband and her business partner. (Although he joined us when we spoke with Michelle for this story, he prefers to stay behind the scenes.) Together, in the autumn of 2015, they opened Shelly’s in Maspeth, Queens. Along with Sunnyside and Woodside, two neighboring communities to the north, Maspeth provides homes and livelihoods to a large population of Irish emigrants and Irish-Americans. 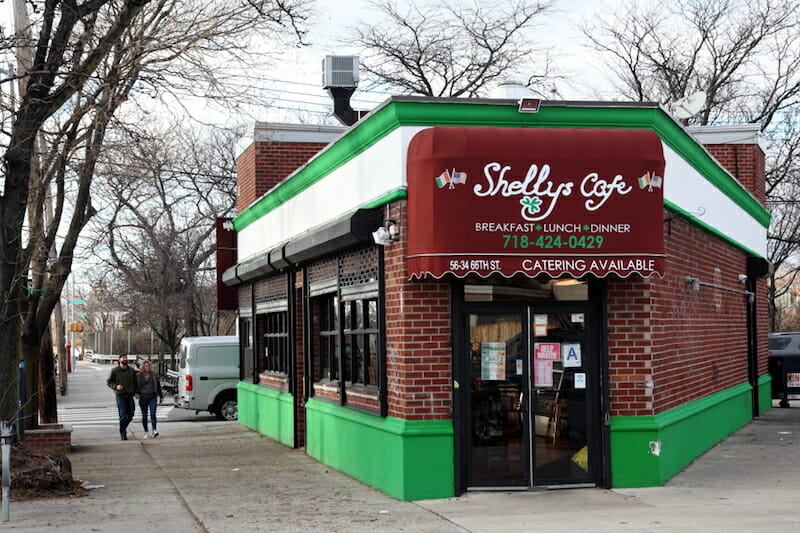 In the early days, the business was often known both informally and on social media as “Shelly’s Deli” or “Shelly’s Deli and Café,” catchy names befitting a business that combined a small restaurant with a tightly curated grocery. Then as now, shelves of imported Irish foodstuffs graced the narrow end of the wedge-shaped room; at the wide end, facing a glass-fronted counter, there’s seating for not quite 20 customers.

Those names, however, proved to be problematic, Michelle told us. In New York, “deli” long ago slipped free of its connection to German-Jewish purveyors who cured their own meats and made their own sausages, and became instead shorthand for grab-and-go corner stores.

Michelle found that she was confronted with a “double-edged sword” – “customers want food fast, and they want it good” – and determined to focus on the latter, even if the occasional customer wasn’t willing to wait. Nowadays, a hand-chalked sign behind the counter emphasizes the “made to order” message, and all mentions of “deli” have been retired in favor of “café.”

Michelle wants to offer her customers “what they’re missing from home.”

What hasn’t changed, of course, is Michelle’s desire to offer her customers “what they’re missing from home.” For those customers, who include a not inconsiderable number of bachelors, many of them construction workers, Shelly’s functions as a “third place” – not home, not work, but another venue where barriers to entry and social discourse are low, and where people can reliably find companionship with acquaintances old and new.

And can also, in the case of Shelly’s, reliably find good food. We know we shouldn’t marvel over something as simple as mashed potatoes, but against the sea of indifferent diner spuds that we’ve encountered over the years, Shelly’s reminds us that these are incomparably better when made from scratch. The preparation is not so much challenging as it is time-consuming, and thus more costly, than quick-serve shortcuts; the texture is terrific. We could make a meal of them.

Of course, we do no such thing. We’ve enjoyed those mashed potatoes with the codfish patties called Donegal Catch; with ethereal fish cakes (alas, no longer in the regular menu rotation) for which cooked cod is flaked into bits, blended with mashed potato, breaded and gently fried; and lately with chicken curry, invigorated by one of several imported spice blends that decorate the grocery shelves. For that recent meal we added baked beans and a jambon (Jam-bone), a folded-over savory pastry filled with ham, cheese and white onion, and with a reputation as a hangover chaser. 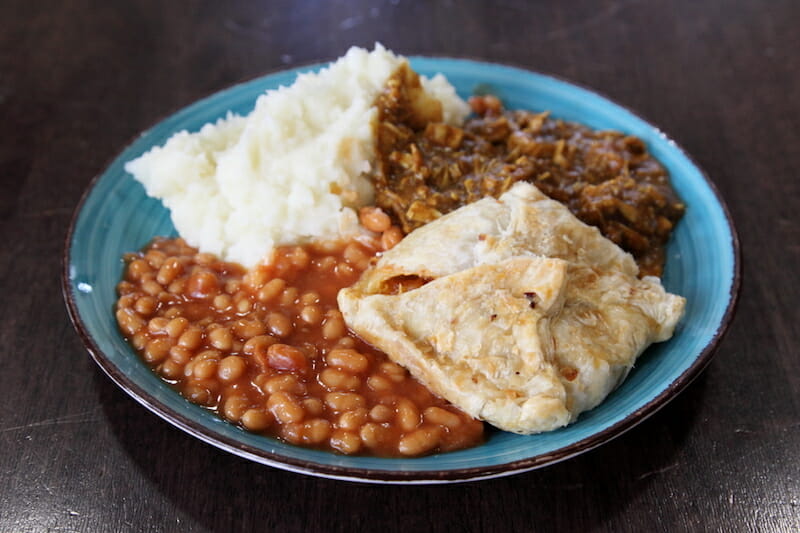 The “go-to’s on Saturday and Sunday mornings,” Michelle observed, are the full Irish breakfast and the Ulster fry. Each is an overloaded platter sporting eggs, bacon, sausage, beans, and assorted other trimmings, including black and white puddings for the full Irish and fried tomatoes and mushrooms for the Ulster fry. Each is also available as a sandwich (or so the menu board tells us; we have not seen these wonders yet).

Come dessert time, we’ve enjoyed the trifle – whipped cream over custard over gelatin – and we’re waiting for Michelle to perfect her banoffee pie. Both in name and in composition, it marries a tropical fruit and a caramelized confection, but Michelle is still fine-tuning the temperamental balance between banana and toffee.

Michelle hasn’t seen Newry since she left for New York, and her father isn’t keen on flying, but her mom has visited more than once. Invariably she’s brought seasonings from Northern Ireland that aren’t available in the States, though these have tended to find their way only into Michelle’s own home cooking. Carry-on luggage is an undependable link in a restaurant supply chain; if she “can’t keep up with” a beloved flavor from home, Michelle explained, she’d rather not serve it in the first place.

With fresh eyes, Michelle’s mom has called on the café, offering new insights into how the customers take to the menu. Naturally, she’s also appraised the food herself. According to Michelle, her mom has given the nod to the Ulster fry; to the beef stew, a long-practiced rendition prepared by Michelle’s husband, that would do Newry proud; and to the shepherd’s pie. Must be that mashed-potato crust. 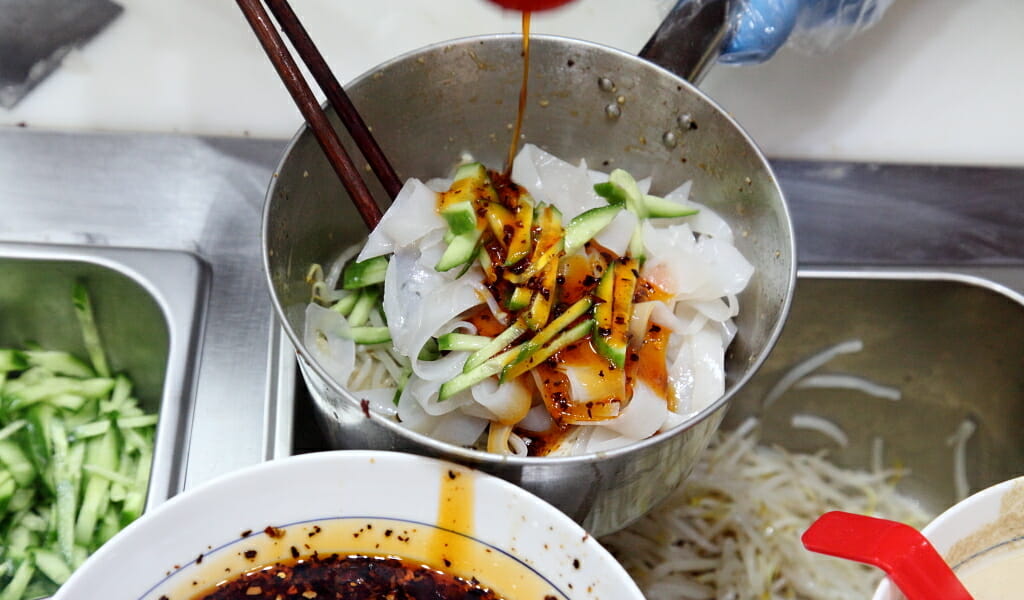 Queens | By Dave Cook
By Dave Cook
QueensThe promise of food prepared before our eyes, just for us, is a big reason that we’re constantly spreading the good word about food events in and around New York. We’re especially fond of festivals and other gatherings held by members of a close-knit group – sometimes congregants of a church, temple or mosque, almost… 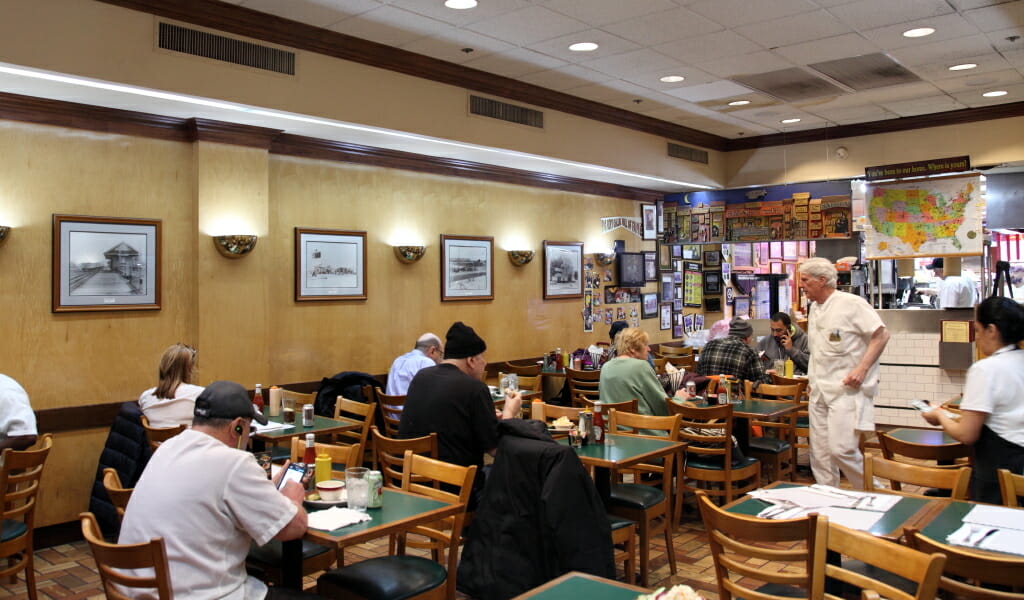