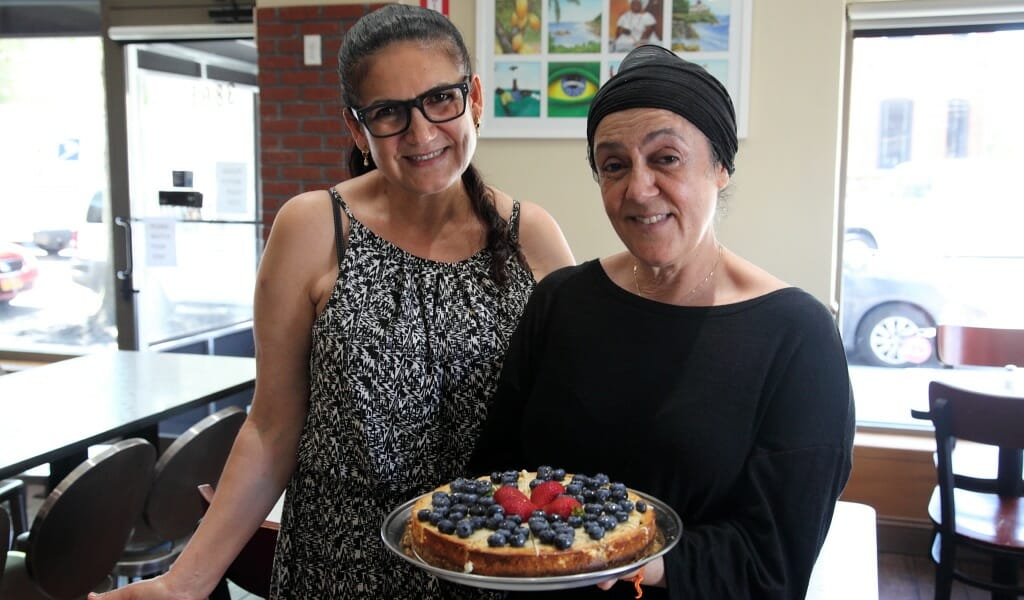 Queens is a grazer’s paradise. On any given day the devoted food lover will find that the culinary experiences come early and often, thick and fast, in mind-boggling variety. Limiting the year’s favorites to a mere handful, then, is problematic when they easily outnumber the combined total of fingers and toes. Consider these five – each in a different neighborhood of Queens – as points of departure for further exploration.

From the sidewalk the seating area seemed tiny. It was within enticing range of the cooktops at this Nepali “kitchen home” (pronounced Bahn-sah gar) but also exposed staff and patrons to periodic sub-Himalayan gusts from the front door. Pressing onward, however, I discovered a not-so-evident narrow stairway; on descending to its base, I was welcomed by a much larger, much warmer dining room and a momo-making station, too.

This two-year-old restaurant serves an acclaimed version of jhol momo, which swamps the stuffed dumplings (momo) in a soupy broth (jhol) that, ultimately, I drank straight from the bowl. Even more enticing was bhuttun, slow-cooked, well-spiced organ meats. My plate of goat bhuttun included liver and tripe, and probably other offal, too. Sole regret: the slow climb, on a full stomach, back up the stairs to street level. 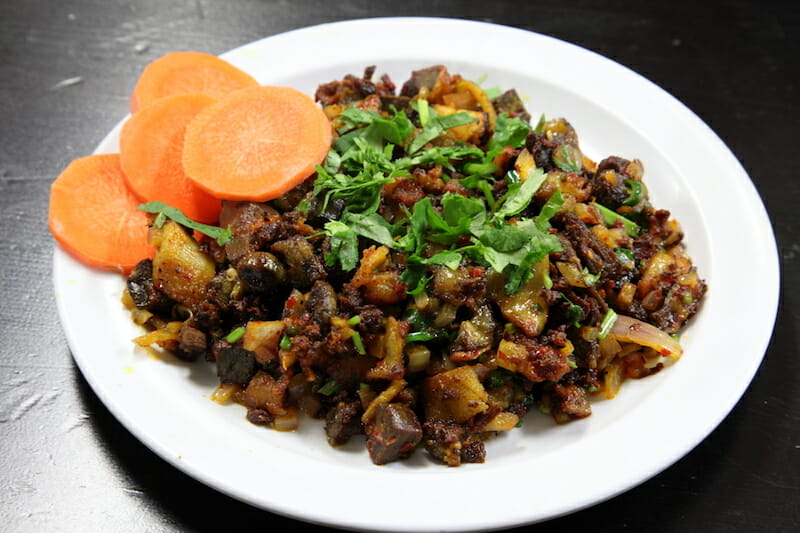 Independence, new horizons, boundless summer afternoons. I still remember, with fondness, the sandwich shop of my suburban childhood, a short bike ride from home, and my unvarying sandwich order: roast beef on a (Kaiser) roll, lettuce, tomato, salt and pepper, no dressing. Oh, and a pack of baseball cards, unwrapped with as much gusto as the butcher paper around my roast beef.

I haven’t added to my card collection lately, and I’ve given up the bike, but when baseball season rolls around, I still call on the ladies at this century-old Italian-American shop. (I also patronize their concession at nearby Citi Field when the Mets are in town.) For my current unvarying order, the “Italian special,” cold cuts and fresh mozzarella are piled high; hot and sweet peppers, mushrooms, and oil and vinegar are added with enthusiasm. It’s easily big enough to share with a fellow (long-suffering) Mets fan. 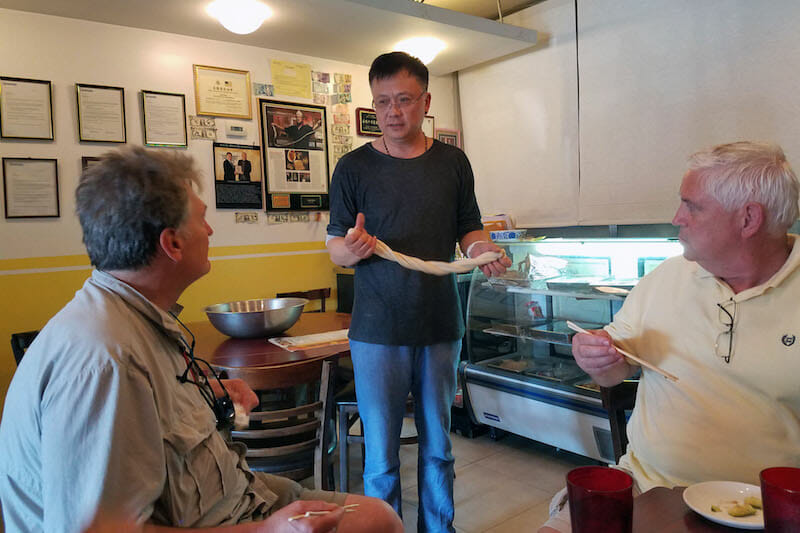 [Editor’s note: Uncle Zhou is moving out of Elmhurst and temporary closed]

Since 2011, Steven Zhou (pronounced Joe) has regaled New Yorkers with the cuisine of Henan province, the breadbasket of central China (not to be confused with Hunan province, land of a thousand takeout menus). Wheat, not rice, is the dominant grain. While visiting with a party of chefs on tour, I pointed out the wall full of printed accolades from Michelin inspectors and the local press; they duly murmured appreciation, then took note of messages on their mobile phones.

The atmosphere changed when the food arrived. At Steven’s suggestion I’d asked for “dial oil noodles,” vinegary and less spicy cousins to Sichuan dan-dan, done three ways: with thin hand-pulled noodles; with broad “belt” noodles, also pulled by hand; and with noodles brusquely knife-shaved from a lump of dough. Texture was their only distinction. Before our tasting the chefs made small talk, and afterward they proclaimed Uncle Zhou the highlight of their afternoon. In between – from the appearance of the noodles until the final emptying of the bowls – they were completely silent (except for occasional slurping). So was I. 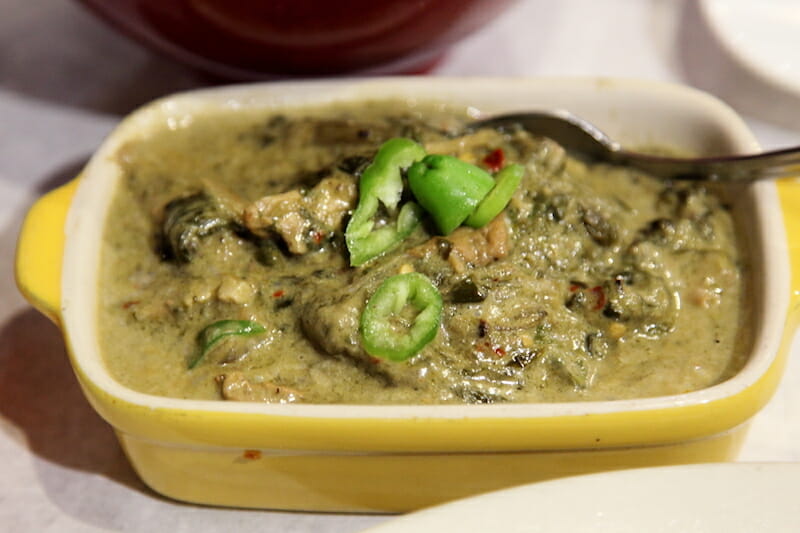 Sometimes a side dish can be as enticing as the main course. A porterhouse for four isn’t truly exceptional, I’ve always maintained, unless the creamed spinach is equally outstanding. In recent years I’ve been spending less time at steakhouses and more over communal meals of other sorts – notably, at Filipino restaurant Tito Rad’s.

At a late-summer feast for 12, headlined by a special-order lechon (roasted pig) belly and massive specimens of inihaw na panga, foot-wide crescent moons of grilled tuna jaw, I made sure to request multiple orders of laing (pronounced lah-Ing). For this Southeast Asian analog to creamed spinach, richness is supplied by coconut milk, greenery by taro leaves and an added kick by chile peppers. Tito Rad’s rendition is superb: There were leftovers of lechon but not of laing.

Though justly celebrated for the variety and consistency of its steam table and churrasco station, this restaurant owned by Bahían sisters Elzi and Erli Botelho Ribeiro remains in our regular rotation for another reason: the desserts. Erli prepares all of them herself, in-house. And just as at the steam table, when one tray runs low, another quickly appears from the kitchen.

With all respect to the well-caramelized banana cake, the tantalizing and tart passion fruit flan, and the prune-bedecked custard called manjar, my summertime favorite – coconut cream cake snowed under by shredded coconut and gilded with a swirl of condensed milk – has yet to be dethroned. If I continue at my current pace of one dessert per meal, however, I’ll never give all the contenders their due. As a New Year resolution, perhaps I should consider doubling up on dessert.

By
Dave Cook
, photos by
Dave Cook and Esneider Arevalo 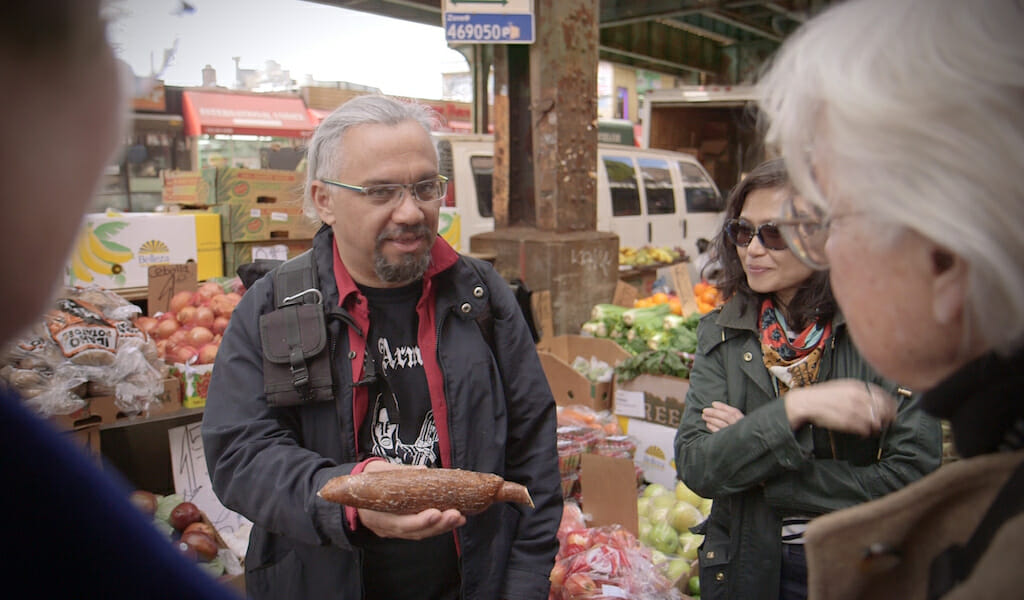 Queens | By Esneider Arevalo
By Esneider Arevalo
QueensBased on NYC Media’s new food TV series, “Native Dish: United Flavors of NYC,” Culinary Backstreets brings you a behind-the-scenes look at some of the New Yorkers featured in these short videos. The series, which aims to celebrate New York City immigrants from all over the world, focuses on one individual and one dish at a time as…
Best Bites 2017: Queens