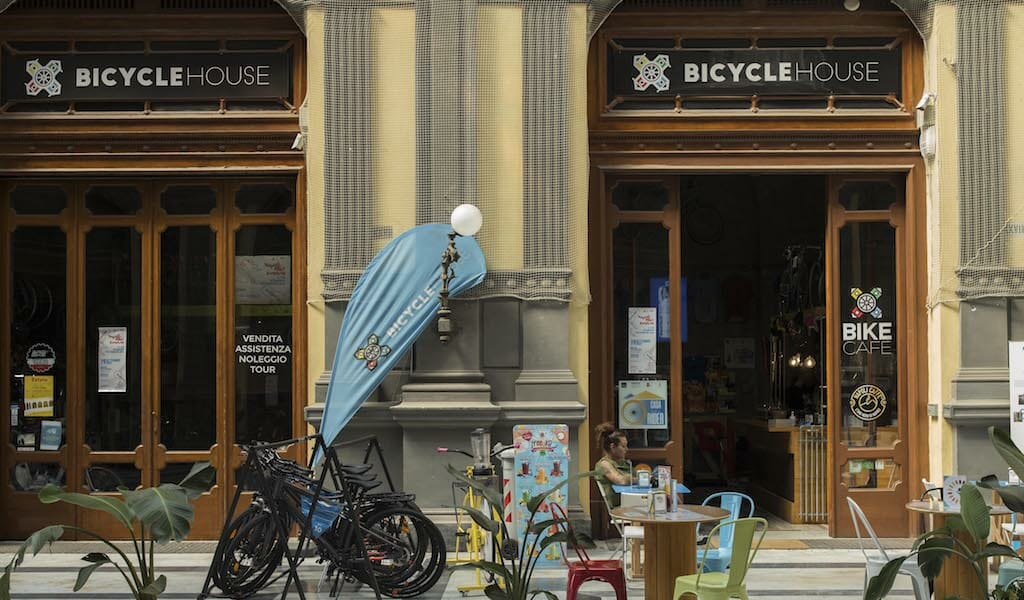 Historically, Naples has not been a city with a large number of cyclists. Too many uphill battles from the historic center to neighborhoods along Vomero Hill make it a difficult location for the casual biker. In recent years, however, environmental consciousness has grown and we are witnessing a rapid development of places dedicated to pedal power lovers.

With Culinary Backstreets working at the intersection of food and travel, it often happens that after our walking food tours, visitors ask advice on other ways to explore the city – particularly by rented bicycle. Today’s Naples dispatch is not just about a café’s culinary offerings, but a service that, in times of sustainable consciousness, is becoming increasingly popular. 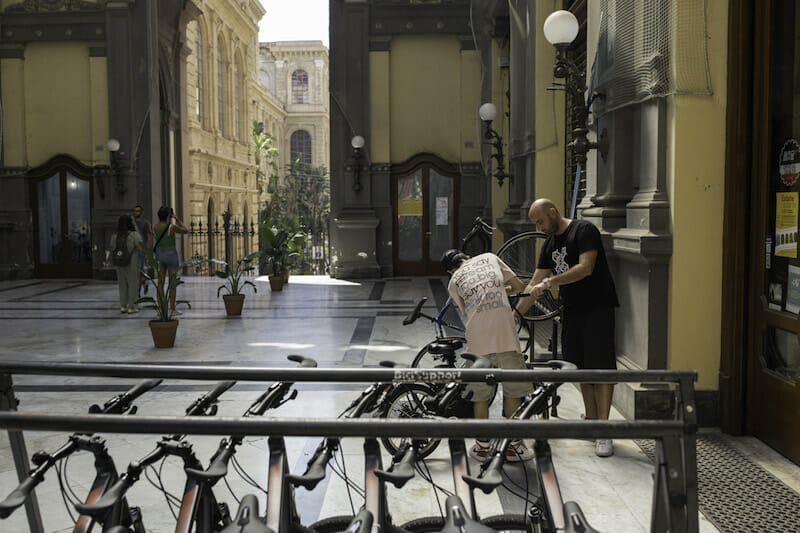 It began back in 2013 with the birth of the Napoli Pedala association, which promotes cycling culture. By 2020, Galleria Principe di Napoli, the splendid iron and glass gallery right in front of the National Archaeological Museum and home to Lazzarelle Bistrot, had become the association’s meeting point for cyclists in the city. Soon, 33-year-old Massimo Minopoli had the idea to serve refreshments to those waiting for bike repairs or for cyclists wanting to just sit and hang. Now, Galleria Principe di Napoli has added another café to its register: Napoli Pedala’s Bicycle House.

Here, travelers can rent bicycles and locals can receive technical and mechanical assistance – while also getting a bite to eat and something to drink. “This is the first bike café in southern Italy,” Massimo, now the founder and manager of the café, tells us, “and it is a meeting place for both bike lovers and tourists looking for experiences and to explore the city.” Since he was a boy, Massimo has been involved in sustainable urban mobility. He ran campaigns to promote cycling and was also a councilor for Municipality of Naples. The cyclists’ café model has been popping up across Europe in this last decade, and it doesn’t look to be slowing down. 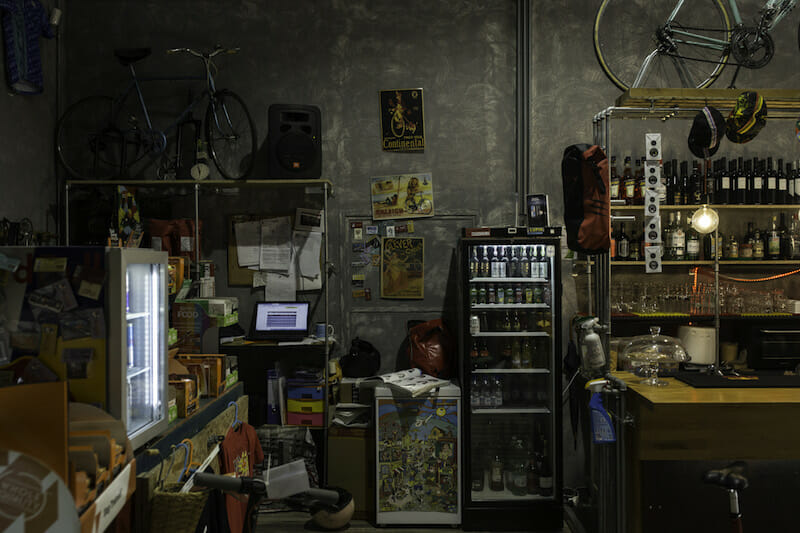 Lunchtime at Bicycle House is usually composed of typical Neapolitan snacks, like taralli (savory cookies), and rustic cupcakes. “We have tried to select quality products that are closely linked, above all, to the southern territory,” Massimo says. Each morning, they stock their counter with delights from local bakeries and pastry shops. The café is also looking to slowly expand the range of food on offer. But it’s the coffee that makes Bicycle House truly a café.

“This is the first bike café in southern Italy, and it is a meeting place for both bike lovers and tourists looking for experiences and to explore the city.”

“The coffee we serve at the bar is a brand inextricably linked to the city of Naples, and one of the best coffees on the market… the black gold of Naples,” Massimo proudly tells us. He is talking, of course, about Napoli Caffè. In Italy, in fact, Naples is considered a “city of coffee” and, according to Massimo, this particular roastery is run by a “small artisan who maintains a strict, high-quality production.”

Also on offer are strictly artisanal, locally produced beers, as well as fresh fruit smoothies. But beware before ordering! The smoothie blender is bicycle-powered – and you’ll be doing the blending as you pedal away. This is a particular favorite of kids who visit the café, and they are valued clientele. We can see that in the great variety of ice creams available. While the regulars at Bicycle House are urban cyclists or other two-wheelers passing through Naples in search of assistance, “obviously, many families cycle with children and, therefore, children are a large part of our customer base,” Massimo tells us. 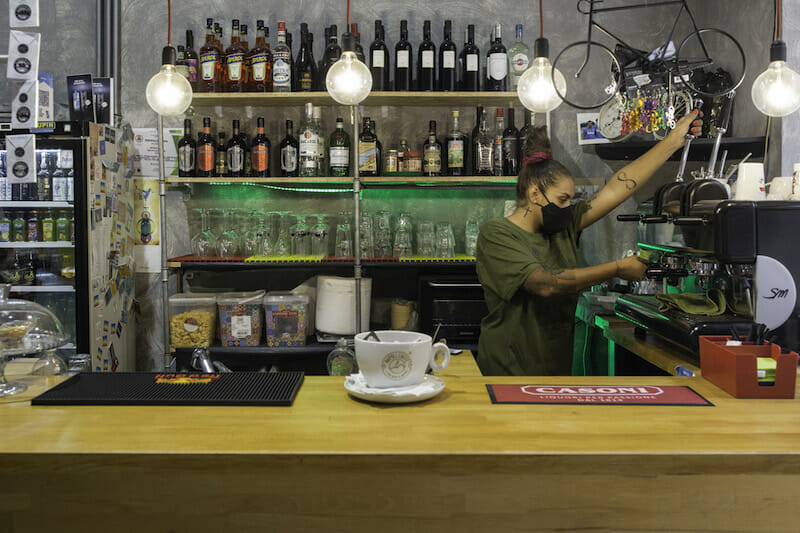 A few months ago, a new feature was added to the bike café, the “House of the Riders” program. The program welcomes bicycle delivery service workers contracted with certain companies to find a moment of rest and refreshment (at a discounted price). On top of that, they can have their bicycles serviced as they carry food and other items to residents all over town.

Bicycle House makes for the perfect pit stop for a cup of excellent, 100% Neapolitan coffee, whether on two feet or two wheels – or looking to pick up some. And for those wary of Naples’ hills, don’t worry, there is always the option of an electric bike. 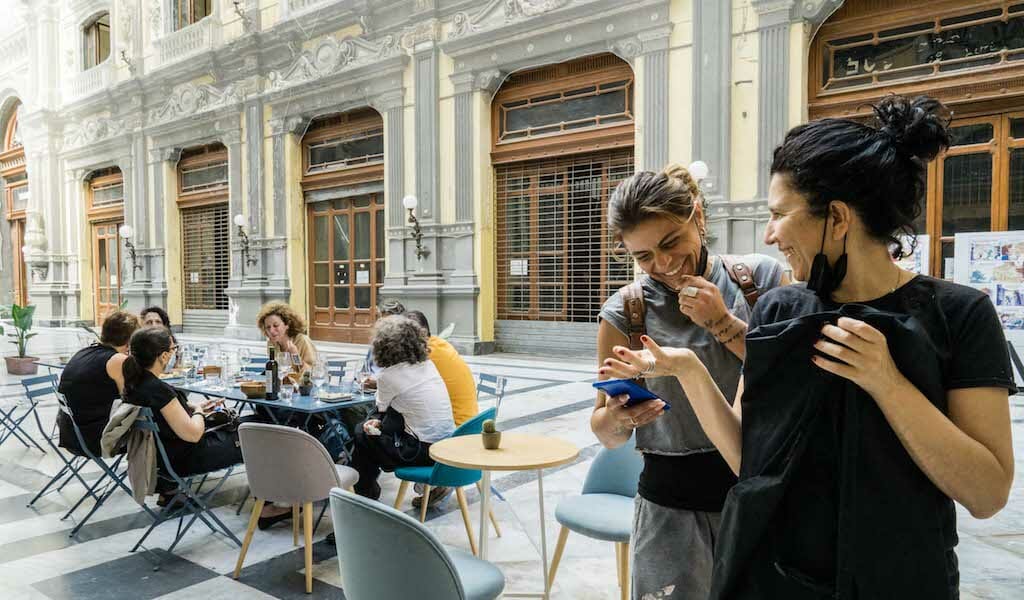 Lazzarelle Bistrot: Coffee With a Cause

Naples | By Amedeo Colella
By Amedeo Colella
NaplesWe are inside the renovated Galleria Principe di Napoli, right between the National Archaeological Museum and the Academy of Fine Arts. Tables line a corner of the gallery’s beautiful interior, and the art-deco ceiling arches above us– to sit at Lazzarelle Bistrot is a real pleasure, for the eyes and the stomach. But this cafe… 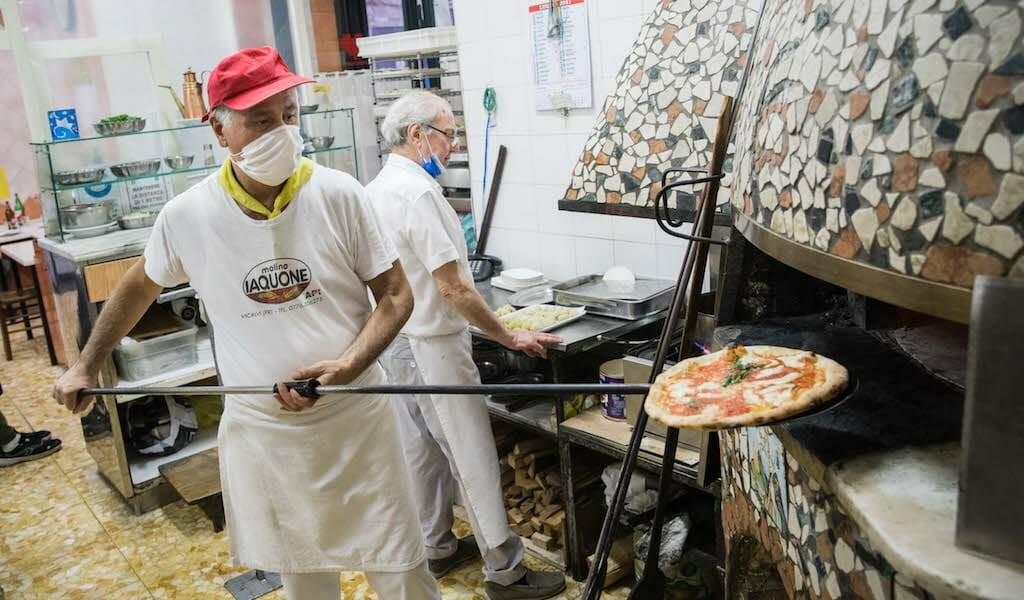 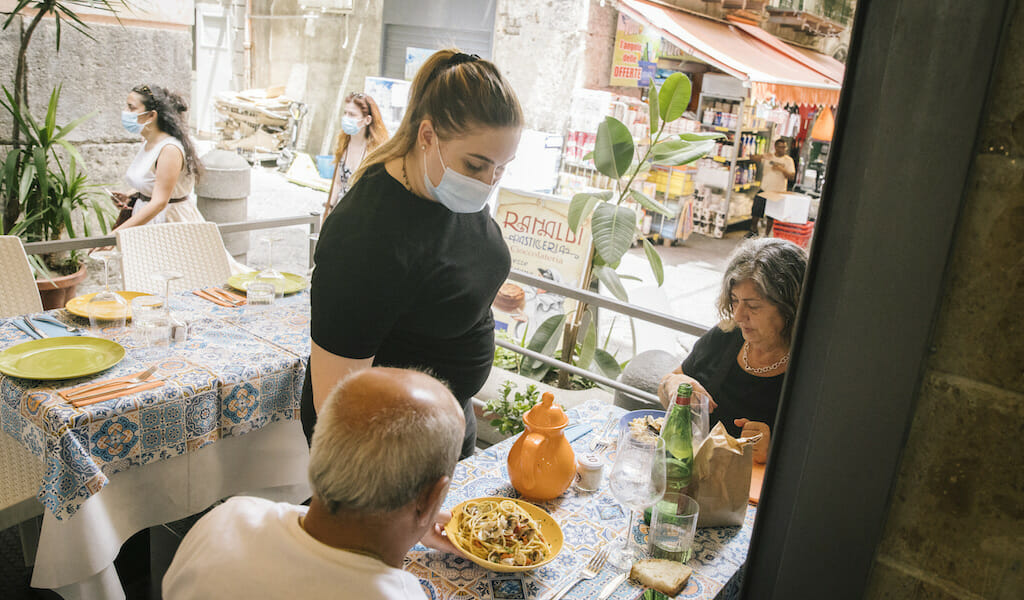