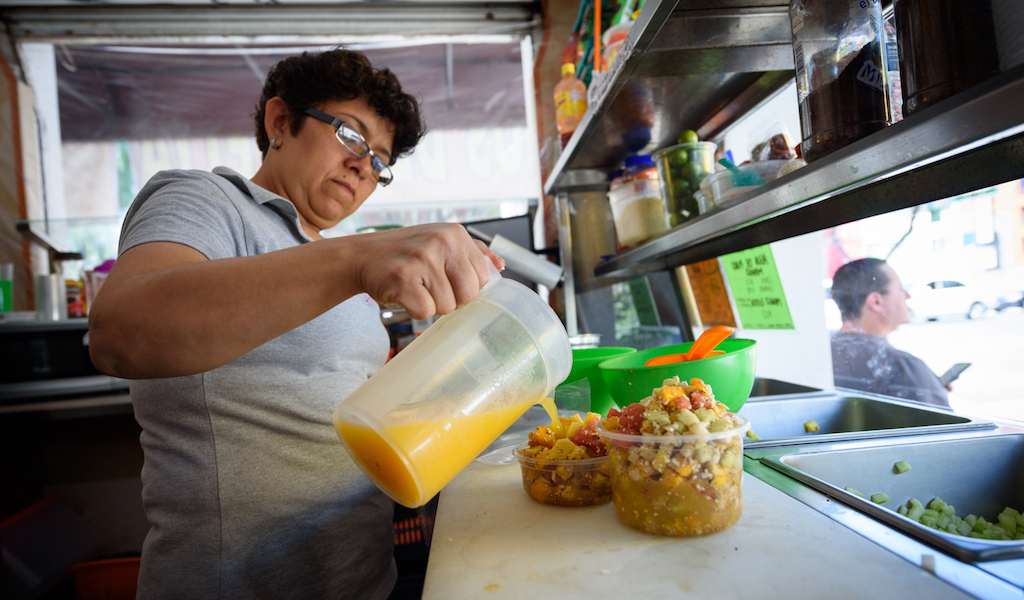 On sunny afternoons in the sleepy neighborhood of Narvarte, crowds of adults huddle around the glass counter at La Gaspacheria, eyes aglow as they consider possible toppings. While the scene evokes children at an ice cream parlor, the ingredients before them strike the uninitiated as a strange mix. Jicama. Hot sauce. Onion. Cheese. Orange juice.

Even among chilangos, who famously love to cram their favorite ingredients together in ever stranger combinations (tortas de chilaquiles and tortas de tamales, for example), the idea of mixing orange juice, mango and raw onion gives pause. Nevertheless, for lovers of the restaurant’s namesake dish, gazpacho – gaspacho is an alternate spelling, although the Mexican version is not to be confused with the Spanish soup of the same name – the promise of a midday serving sets one’s eyes aglow and one’s stomach grumbling.

“It took a while for defeños to understand our gazpacho,” Claudia Gomez, the restaurant’s proprietor, recently told us. “I think the idea of onion and orange juice together didn’t sound good. But of course it’s delicious.” 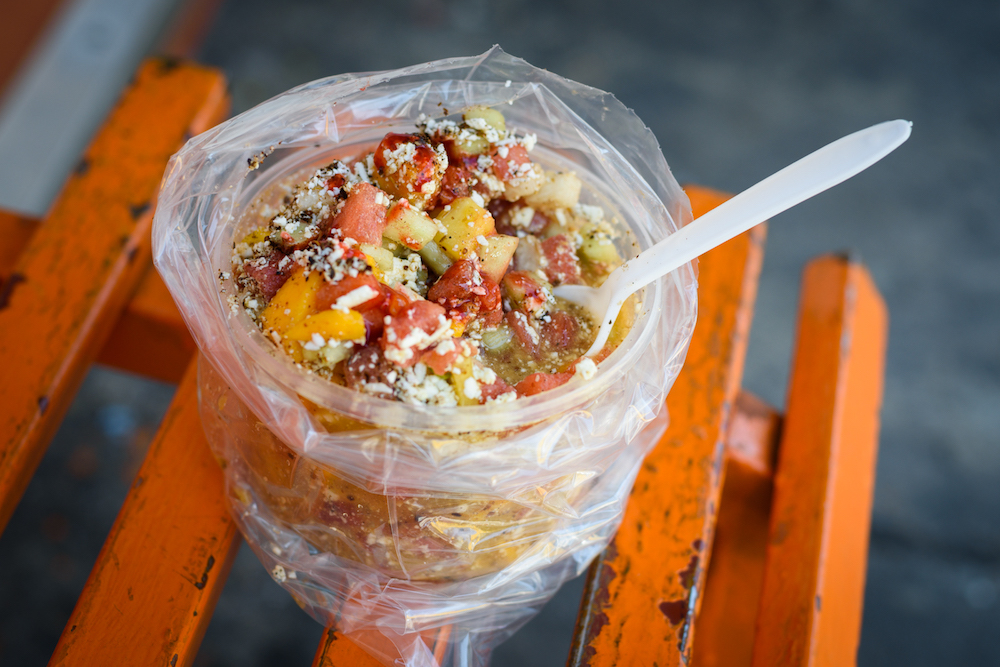 So delicious that Gomez found herself constantly craving it when she and her husband moved to Mexico City from the state of Michoacán 10 years ago. While gazpacho vendors line the street corners of the Morelia, Michoacán’s capital and Gomez’s former hometown, Gomez claims she couldn’t find a decent version of the dish in DF. “I grew up eating it, so it was a comfort for me,” she said. “Finally, in 2015, my husband and I decide to open our restaurant and bring the flavor of our state to the capital.”

Once we’d heard about it, we couldn’t resist trying such a unique dish, so on a lazy spring Tuesday, we headed to La Gaspacheria. Mexican gazpacho tantalizes the eyes. Served in varying sizes of translucent plastic cups, the dish shines in the sun, its cubes of diced fruit glistening under freshly poured OJ. Nevertheless, ordering gazpacho for the first time triggers one’s fight-or-flight instinct. The array of toppings just don’t seem like they belong together. Frankly, as the staff handed over our gazpacho, we were worried.

After the first bite, it takes the brain a moment to process the wide array of flavors battling for the attention of one’s tongue. But to our great surprise, once the smoke cleared, it became apparent that these tastes not only worked together, but actually complemented one another. 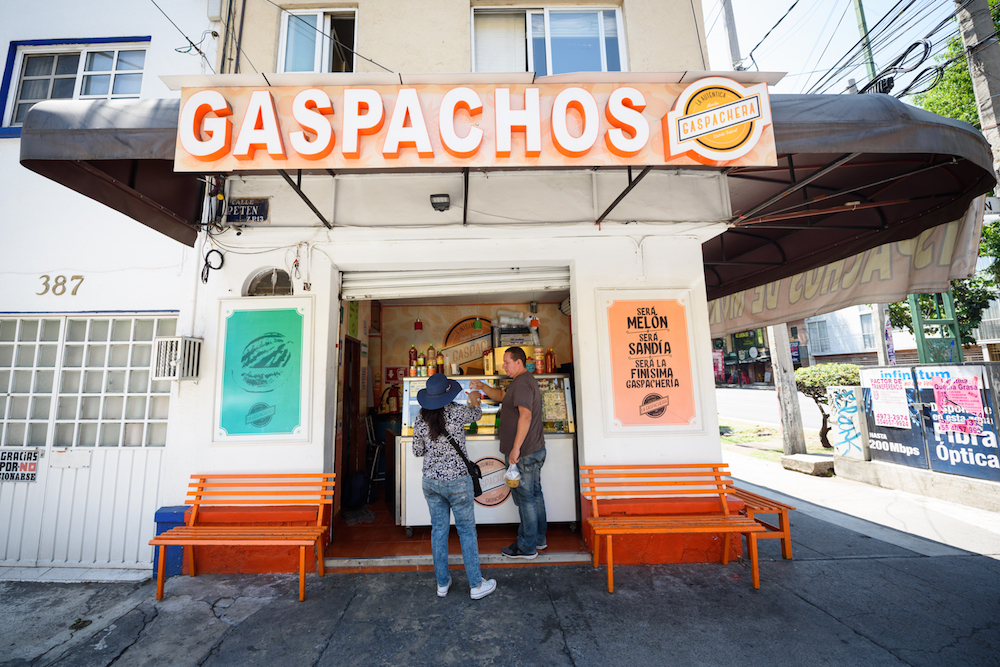 While traditional Mexican gazpacho includes only jicama, OJ, queso fresco, onion, salt, a touch of lime and a smudge of pasilla, La Gaspacheria offers a wide range of seasonal fruits. We couldn’t resist asking them to load our order down with everything they had. This included pineapple, mango and a brand of hot sauce manufactured in Michoacán that we’d never seen before. The jicama anchors the dish with a subtle, woody taste and texture that provide the base upon which all of the other flavors dance. The pasilla, or black chile, buttresses the earthier tones of the jicama, adding just a barely noticeable background hum of spice that resonates on the tip of the tongue and the back of the throat. The hot sauce, which is optional (yet which Gomez said every true Michoacán native included) blasts the rest of one’s mouth with heat. Thankfully, the fruit and cheese produce a frigid front that moves in to soothe and cool. Among so many other powerful flavors, the raw onion barely registers beyond a pleasant highlight that balances so much sweetness. The OJ serves more as a lubricant to wash down the other ingredients than as a dominant flavor in its own right.

Midway through our first cup of gazpacho, one of the restaurant’s employees asked us, “So what do you think?” We would’ve expounded eloquently upon how delicious and complex and overwhelming the dish was, but we didn’t want to stop eating. So instead we grunted with pleasure and nodded, savoring every bite. 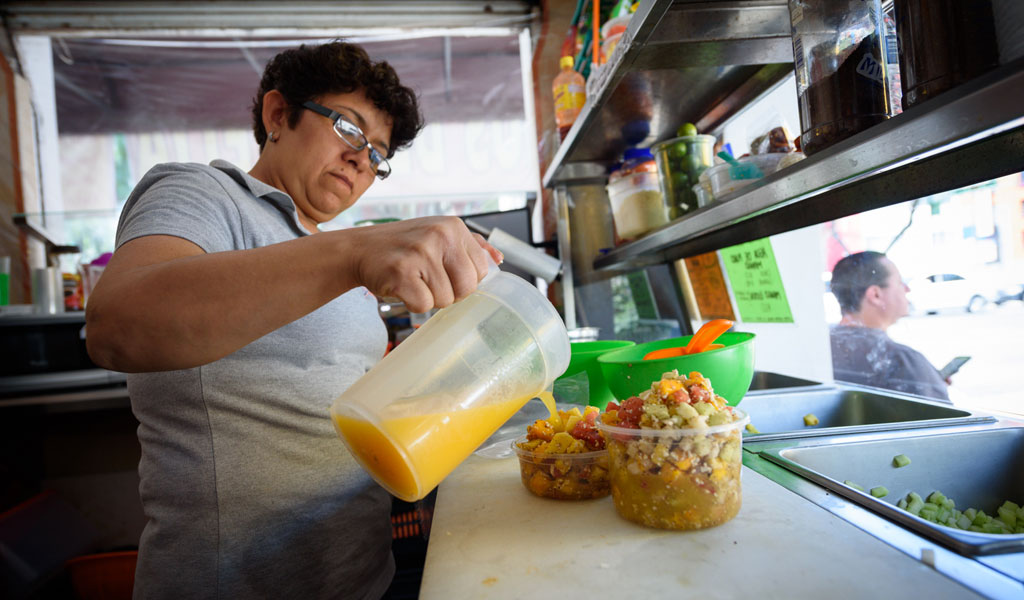 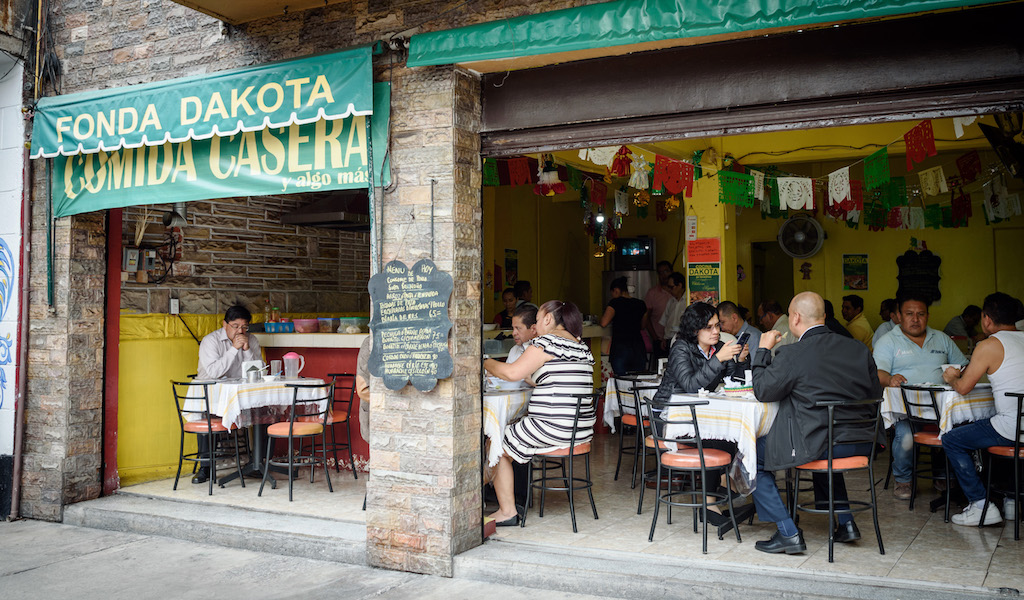 Mexico City | By Megan Frye
By Megan Frye
Mexico City -- At exactly the right moment, and not a minute sooner, lunch will be ready at La Cocina de Q.B.D.O. Generally, the magic hour of comida corrida – affordable, multi-course midday meals offered on weekdays and often Saturdays – is between 2-4 p.m., the typical lunch hour for Mexican workers. The comida corrida, also… 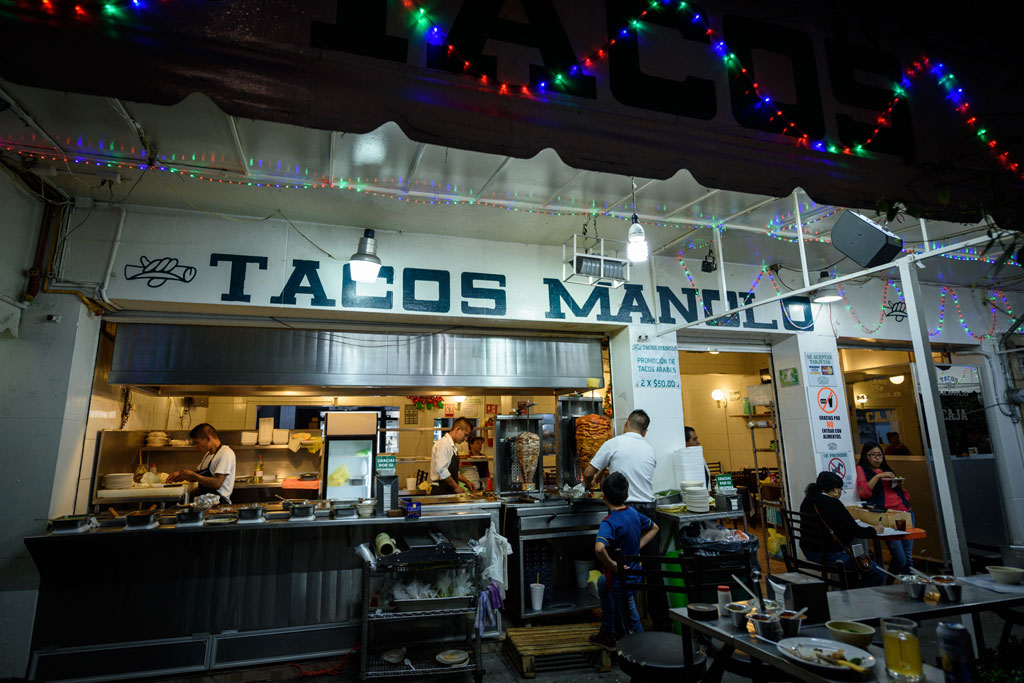 Mexico City | By J. Alejandro
By J. Alejandro
Mexico City -- Like many of Mexico’s best taquerías, Tacos Manolo greets its patrons from a block away with its alluring smell. But it isn’t the well-known odor of fired achiote on a swirling spit of al pastor or the equally recognizable heavy scent of bistek searing on a griddle. No, the aroma wafting down this…
La Gaspacheria
Eugenia 1559, Narvarte Poniente
Tel. +52 55 6637 1364
Hours: 10am-6pm