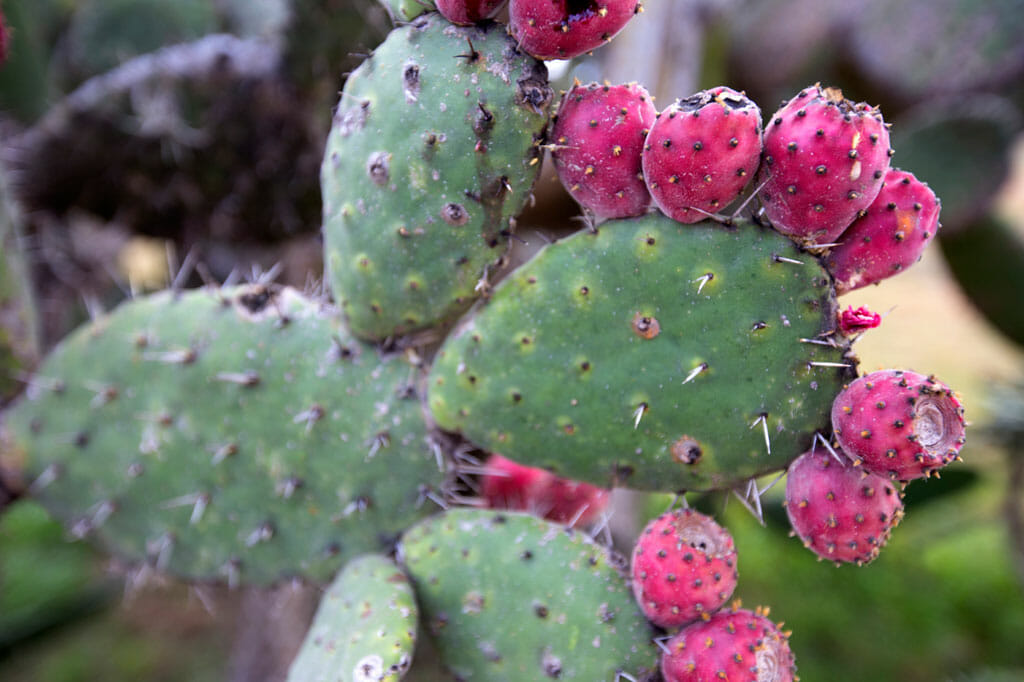 As Mexico’s northern neighbors look forward to early spring rains, in Central Mexico, the dry season will continue having its way with the landscape into May, sometime even June. The sun shines hotter by the day; dust blows scratchily against yellowed and crackly brush and scraggly, twisted branches of mesquite.

Mexico City is located on desert plateau, and there, amongst the dry spines of the cacti, there are signs of new life well before the rainy season of summer officially begins. Red, orange, fuchsia and yellow blooms splash across the arid desert regions. From Sonora in the north, south beyond Mexico City to Puebla, even including parts of inland Veracruz and Oaxaca, the cacti burst into color.

Cabuches (ka-BOO-chez) are the tiny yellow artichoke-like buds of one of the 70-plus varieties of biznaga – barrel cactus – and one of the first edibles to be harvested. They are a delicacy to quickly collect before they flower and most often are preserved en escabeche and can be found at tiendas selling artisanal products. If you like marinated artichoke hearts, these are a wonderful local alternative. Chilitos are the fruit of another biznaga sold regionally by the cupful as snacks. The name is appropriate: these tiny buds look just like red chilies but are mildly sweet and floral. 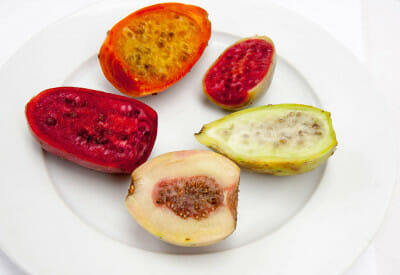 Much easier to come by is the iconic, prickly pear cactus, called nopal for the whole plant and its paddles and tuna for the fruit. The importance of the nopal to the culture goes back to the Aztecs, and it remains one of the essential foods in the regional diet of Central Mexico. Almost every Mexico City street vendor cooking up almuerzo (early-day snack) like quesadillas or tlacoyos offers nopales as a filling, while prominent chefs, like Quintoníl’s Jorge Vallejo, show it love in a different way – his April tasting menu included a salt-cured nopal and for dessert, he used this vegetable in a sorbet, nieves de nopal.

As for the fruit: while the bright pink tuna is grown commercially for export, other varieties of nopal give fruits of pale green, gold, orange and speckled white and pink flesh. The flavor and color of these are comparable to melons. Pale green-fleshed tuna has the lightly sweet and refreshing mineral taste of cucumber or honeydew; bright fuchsia, the berry-like sweetness of watermelon, and orange-gold much like cantaloupe. If you buy them whole, with skin still on, generally the spines will have been scraped off. But beware what you can’t see: hair-like needles as irritating as microscopic shards of glass when they get under your skin often remain. Your best bet is always to find a vendor that sells the fruit ready to eat. Traditionally, eating the whole fruits, gravel-like seeds and all, is known to be a great way to scrub down the intestinal tract, but if you’re not into that, the juice alone will show up in agua frescas, helados, paletas, sometimes cocktails. There’s a tart cousin, too; xoconostle, used in savory dishes, or in salsas, usually in combination with smoky chilies. 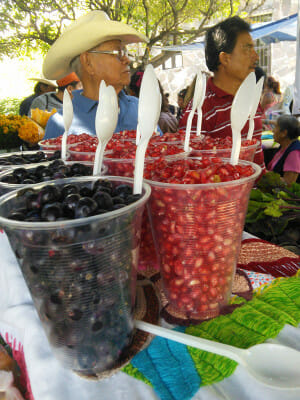 Tiny, deep purple berries resembling wild blueberries – and at least as nutrient dense, if not more so – come from the garambullo cactus. The fruits themselves aren’t prickly, but no cactus fruit is an easy harvest. When these are at their peak – June, July – keep your eyes peeled for itinerant merchants bearing pails of the fruit around Mexico City’s Mercado de la Merced or some of the weekly tianguis (open-air markets). This is not a fruit that’s in great abundance, but it does turn up. It’s also worth looking for this flavor at paleterias, like La Michoacana, or again, getting extra special treatment at some of the trendy frozen dessert shops like Nómada Heladeria in Condesa.

Lastly, there are two fruits with similar names but distinctly different from one another. The pitaya, the pride of Jalisco (Guadalajara), is a cute yet nasty little ball of spines with a magenta flesh full of black seeds. The flavor is similar to the bright pink tuna, but the seeds are smaller. The pitahaya – “dragon fruit” – many understand to be an Asian fruit, but it is, in fact, native to Mexico.

From June or so, if you are exploring natural areas of Mexico City, like the grounds of Teotihuacán, or the Jardín Botánico at UNAM, you’ll encounter many of these cacti tempting you with their fruit. Resist! They may look lovely as jewels, and you may think that by carefully picking just one… like… so! that you will be spared injury. Instead do your cactus fruit foraging at the mercados and from menus. Leave the prickly business to the locals for whom this skill comes from ancient wisdom.

Margret Hefner, a Canadian personal chef and food writer, has written the soon-to-be-published eBook Frutas y Verduras, Guide to the Fresh Taste of Mexico. Pre-order the book here, and use the code “presale65” until May 15 to receive 35 percent off.

Tbilisi | By Paul Rimple
By Paul Rimple
TbilisiWe were strolling through the Dezerter’s Bazaar building when a little woman, about 5 feet tall, interrupted a pair of our German guests with “Sprechen Sie Deutsch?” Instantly charmed by her bright expression and linguistic dexterity, they stopped and chatted away in German. That’s how Tina Nugzarashvili became a must-stop on our Tbilisi market walk.…
Spring in Mexico City