The kiosk in beautiful São Paulo square, located close to the waterfront, in the Cais do Sodré neighborhood, always reminded us of a beacon, with its vibrant red color and many light bulbs. Except rather than warn off passersby, it attracts the hungry and the thirsty, even more so now that André Magalhães, the chef at Taberna da Rua das Flores in Chiado, has taken over this traditional kiosk.

The oldest and only privately owned kiosk in the city, Quiosque de São Paulo has a long history, although not quite as long as the square itself – Largo de São Paulo is one of the best examples of the architectural style known as Pombalino, named after Marquês de Pombal, who led Lisbon’s recovery in the aftermath of the 1755 earthquake.

Built in 1872, the kiosk first served drinks and later small bites of food and snacks. In the 1960s, it became particularly popular and stayed that way up until the 90s, even through the 1974 revolution, serving people on the go with sandwiches, fried meat croquets, cod cakes and other savory snacks as well as tipples like ginja (sour cherry liqueur), beer and aguardente (firewater). It was thronged with local workers before and after work, but was also frequented by sailors, people from the nearby Ribeira market, dockworkers and commuters. In the late 20th century, Cais do Sodré was already established as a main transportation hub, with the ferries coming from the south bank and buses, trains and trams departing from here. 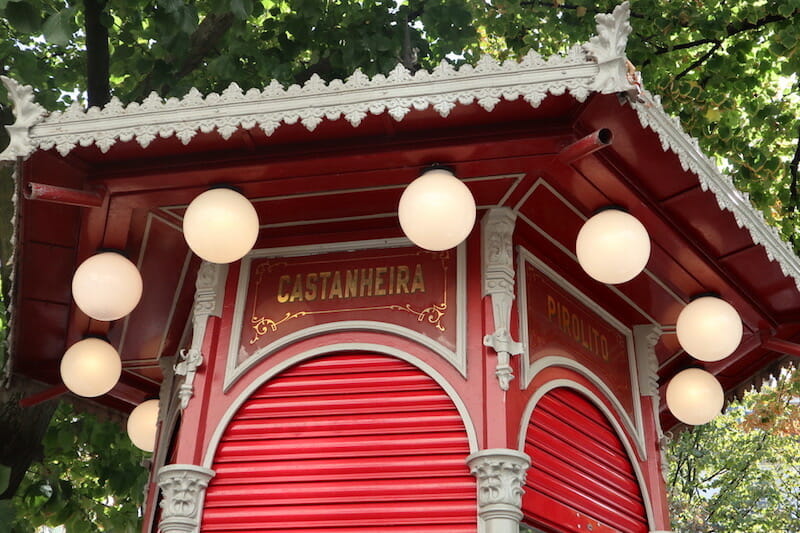 As more people moved to the suburbs, Lisbon’s kiosks declined in popularity. But after the smoking ban in cafés and restaurants in 2007, and with the growing number of tourists and visitors after 2013, they once again thrived, with new ones opening across the city. Catarina Portas, the entrepreneur behind A Vida Portuguesa shops, had the concession to run several kiosks owned by City Hall for some years; she also bought Quiosque de São Paulo with João Regal from the Castanheira family, whose name is still seen on one side of the kiosk.

Portas, who is friends with Magalhães, gave him a call this spring to say that the kiosk was vacant and to offer him the chance to run it with his team. The chef, who has been instrumental in Lisbon’s petisco (“snack”) revival, jumped at the opportunity – the new dining regulations had restricted capacity at Taberna Da Rua das Flores, making the restaurant overstaffed – and began planning a menu of small bites, which can be consumed at tables fanning out into the square.

“I wanted to keep the tradition of low prices too, so I only have affordable petiscos. I didn’t want to have prices for tourists but for Lisboetas.”

As a teenager, Magalhães would often take the ferry and remembers clearly a kiosk that used to be closer to the river, where he would stop for a snack. These powerful memories of individual kiosks but also other iconic dining establishments in Cais do Sodré inspired his offerings: “I tried to keep the traditional petiscos you would find in this area,” he said. Like, for instance, the torresmos, a pork-crackling sandwich made famous by Casa Cid, a traditional tasca founded by a Galician that sadly closed earlier this year. Magalhães is recreating the sandwich but with the addition of chouriço butter.

At the same time he is reviving old aperitifs and xiripitiri (small alcoholic drinks). “We’re also doing our own salsaparrilha, a soft drink, using a recipe from the 19th century, really a tribute to the herbalists that still exist around here,” he told us.

Since the kiosk is so small, all the food is prepared in Taberna’s kitchen. The menu includes one of the best sandwiches we have tasted of late: a squid sandwich, again inspired by the piles of fried fish – namely squid – that Magalhães used to see in kiosks and tascas in the neighborhood. Using a sourdough bun from Gleba bakery, he adds a spicy mayo and lime zest to the fried squid. He then squeezes the sandwich to make all the juices and sauces mix. It’s just brilliant and costs only €3.80. 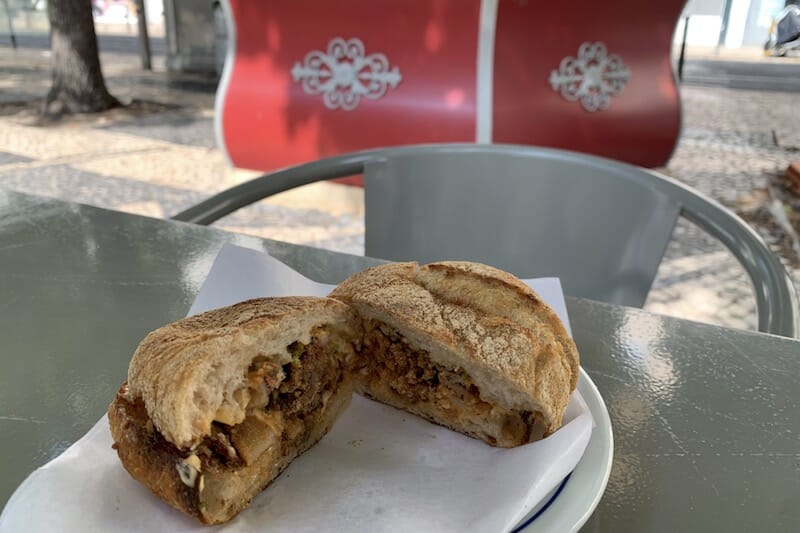 The menu also features a miomba, a lost sandwich that Magalhães recovered, made with pork neck. “Before the prego (steak sandwich) and the bifana (pork sandwich) there was the miomba, a sandwich made from a cheap cut and small buns,” he said. His version has very thin slices of pork neck cooked at a low temperature in lard. “There used to be even a ‘king of miombas’ in Parque Mayer [a theater area near Avenida da Liberdade],” Magalhães added.

His tribute to nearby tascas, kiosks and cafés also includes serving a presunto (salted ham that’s similar to prosciutto) sandwich, with a generous amount of Portuguese charcuterie. “We have other quality presunto, it doesn’t need to be the expensive pata negra (the Iberian ham) to be good,” he said, lamenting that “things are getting too gourmet.”

“I wanted to keep the tradition of low prices too, so I only have affordable petiscos. I didn’t want to have prices for tourists but for Lisboetas,” said Magalhães. “And we’re talking about petiscos not tapas. I can’t understand why the Spanish word tapas keeps being used when we have a word for these snacks and small plates: petiscos,” he added.

It’s clear that Magalhães takes pride in serving only high-quality petiscos. In the kiosk, we tried very good versions of rissóis de camarão (shrimp turnovers), ovos verdes (literally “green eggs,” a kind of deep-fried deviled egg with parsley) and pastéis de massa tenra (a savory pastry filled with meat and chouriço). On the small plates section there’s the octopus salad but also a bean and mackerel dish, and a pork ear salad.

With his partners Bárbara Cameira and Tiago Alves, Magalhães is hoping the São Paulo kiosk and square will once again be a joyful meeting place. Especially during these strange pandemic times, having the chance to sit down in this tree-filled square, nibble on a small snack and drink a traditional mazagran (iced coffee) or a xiripiti like ginja or favaito (sweet muscatel from northern Portugal), feels like a privilege. 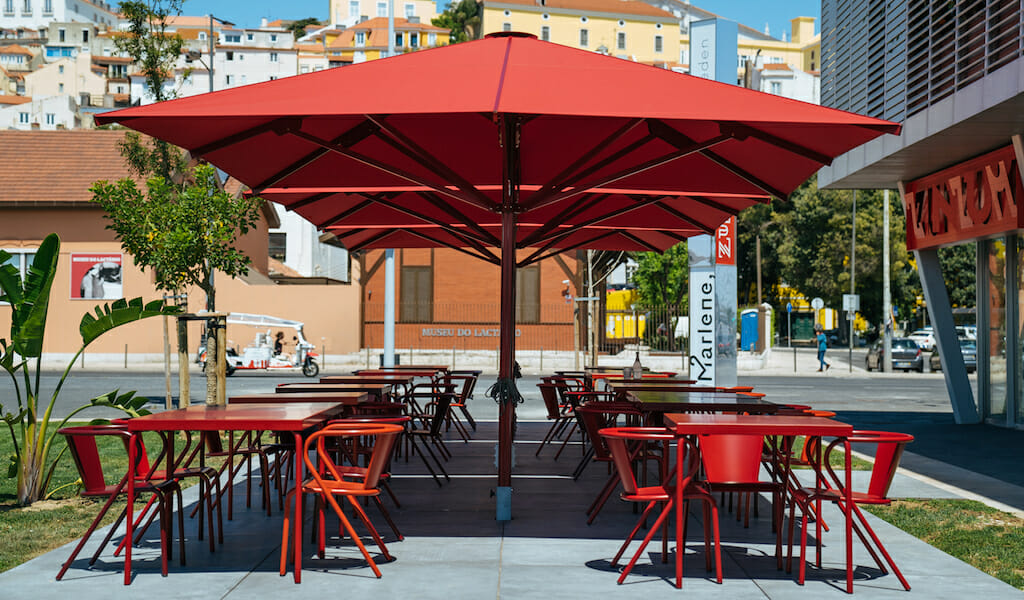 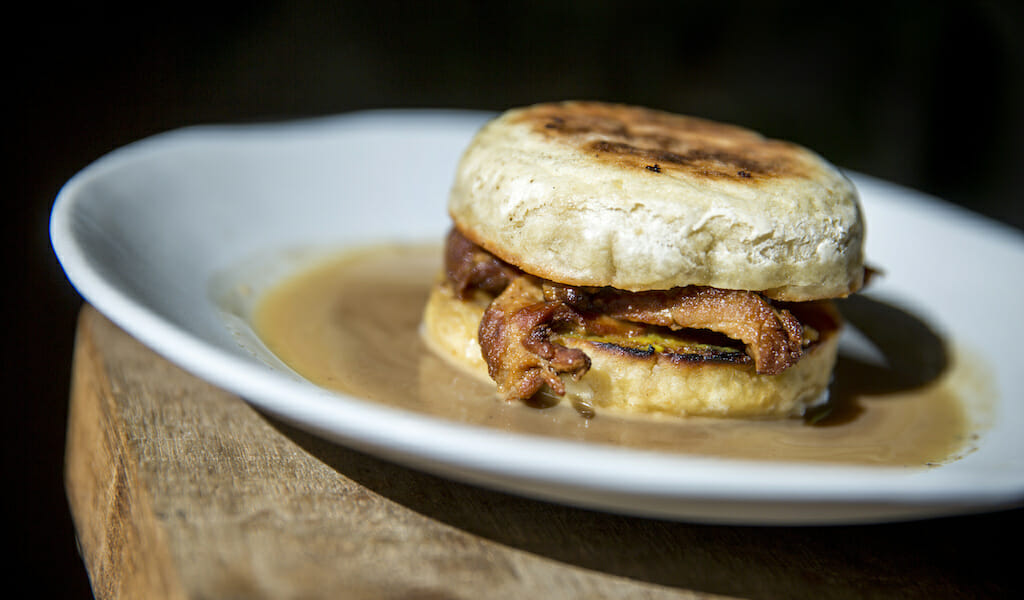 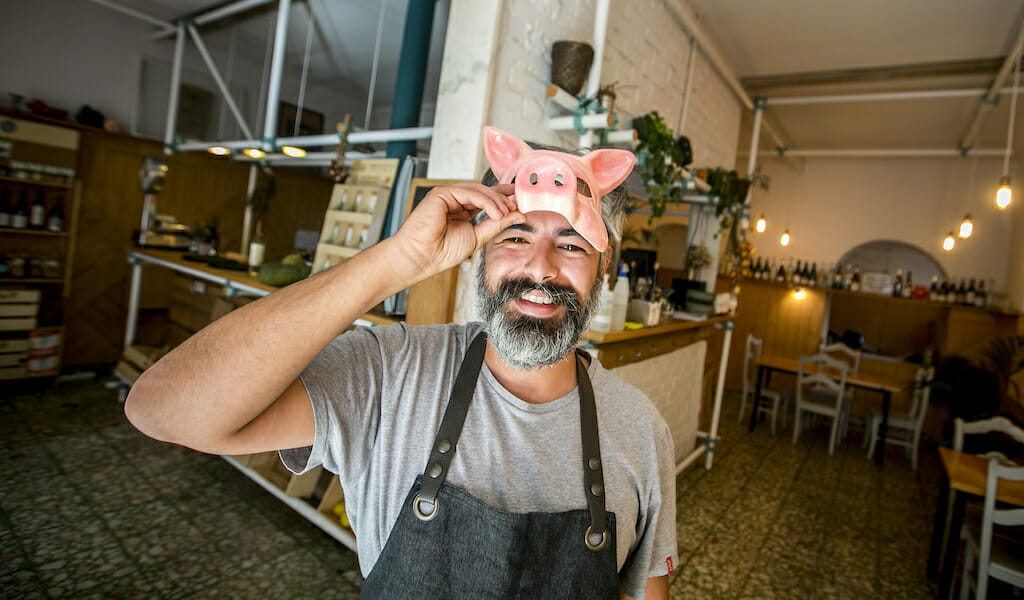 Lisbon | By Célia Pedroso
By Célia Pedroso
LisbonOn a quiet street in the Campo de Ourique neighborhood, a green awning hangs out front of Pigmeu, giving the restaurant a bit of a French look. But inside, the nose-to-tail menu couldn’t be more Portuguese: As one might guess from the restaurant’s name (it’s a play on the words pig and meu, “mine” in…